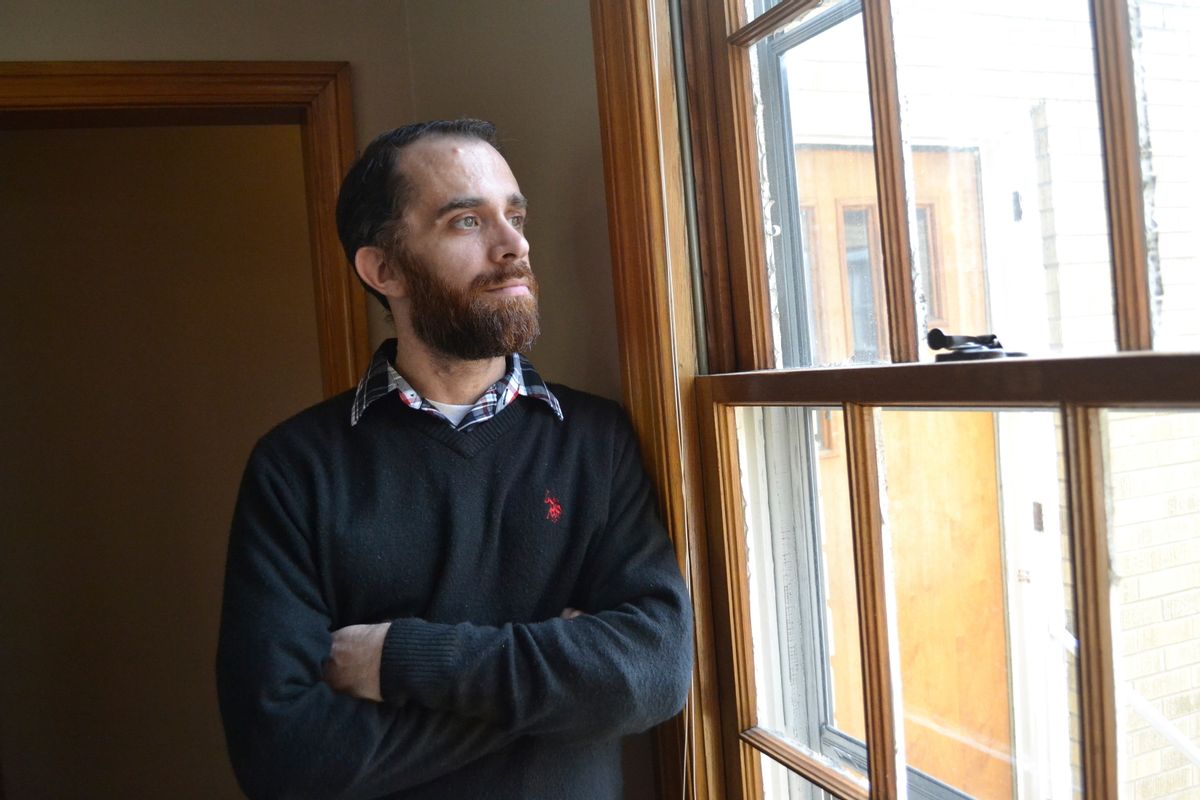 In a Wednesday, Feb. 1, 2017 photo, Tyler Witten peers through a window at the Sanibel House, a residential addiction center in Catlettsburg, Ky. Witten, a former opioid addict, has gone through an addiction program and now works as a weekend staffer at the house. The house and other centers are operated by Addiction Recovery Care, which is seeing many new patients who are covered under Kentuckys Medicaid expansion as part of the Affordable Care Act. (AP Photo/Dylan Lovan) (AP)
--

By the time Joshua Tree National Park in Southern California closed today — this time for real, sealing out even bikers and hikers — local residents were seething.

The picturesque swath of desert east of Los Angeles had been overrun by visitors the weekend of March 21 – two days after Gov. Gavin Newsom issued the nation's first statewide stay-at-home order to slow the spread of the coronavirus.  The line of cars came anyway, bumper to bumper, even though the National Park Service had closed the park's roads and campgrounds that weekend. The government extended the closure this week to bicyclists and pedestrians.

"It was crazy how many people were in town that weekend," said Robin Hercia, a graphic artist who lives in the unincorporated community of Joshua Tree. "People thought somehow that coming to Joshua Tree, out into nature, was exempt from the don't-go-out category.

"It's just this defiant, selfish behavior," she said.

The tension is playing out across the nation, as housebound Americans seek refuge in the great outdoors — for exercise, for tranquility, for a place to de-stress.

But is the great outdoors really such a great idea right now?

While public health experts continue to assure people that being outside is generally safe — with appropriate social-distancing of at least six feet — a new message is emerging about how far Americans should venture, and what is acceptable behavior.

Extreme sports enthusiasts are being urged to dial it back and not take risks in remote areas that could further tax local emergency responders.

Small communities near national parks or other outdoor attractions are asking tourists — typically their economic lifeblood — to stay away for now to protect their own safety and fragile health care systems.

"Having a zillion people together just because they're outdoors is not protective."

A trailhead near you

In Washington state, which had the nation's first confirmed coronavirus case, a popular hiking group offers this straightforward message:

"If you have to drive to get to a trailhead, it's probably too far," said Kindra Ramos, director of communications for the nonprofit Washington Trails Association, which has some 24,000 members.

Ramos said a "powerful set of circumstances" is driving people to want to escape into nature — the arrival of spring, the burden of being confined, the stress of the unknown.  But directives from various land management agencies have been confusing to hikers, she said, and many are finding it difficult to keep a six-foot separation from others on trails.

"Because walking in nature and just being in the fresh air is so important right now, the Washington Trails Association is really recommending that folks stay close to home," she said. "Right now is a great time to be in your neighborhood and discover that local park you haven't spent time exploring."

With COVID-19 cases now topping 213,000 in the U.S.,  the National Park Service has faced withering criticism over its erratic handling of the parks — beginning with a decision last month by Interior Secretary David Bernhardt to waive entrance fees during the pandemic.

"This small step makes it a little easier for the American public to enjoy the outdoors in our incredible National Parks," Bernhardt stated in a March 18 news release.

While some iconic parks soon closed — including Yosemite and Yellowstone — the Grand Canyon remained open until this week, despite widespread criticism and reports of crowd surges.

The nonprofit National Parks Conservation Association had called Bernhardt's initial refusal to close parks like the Grand Canyon "beyond reckless."

"On a popular trail in the Grand Canyon, a ranger had 600 contacts with visitors in just one day, proving that social distancing just isn't possible, despite people's best intentions," said association president and CEO Theresa Pierno in a March 26 statement.

The Washington Post reported this week that seven national parks workers have tested positive for the coronavirus, but the government did not identify their locations.

Chris Clarke of the National Parks Conservation Association, who lives and works near Joshua Tree, said he has been concerned about the safety of park workers and local residents. Winter and spring are typically peak seasons for the desert parks, which include Joshua Tree, Death Valley, Mojave National Preserve and Castle Mountains National Monument.

"We do face some pretty dire potential consequences here from the coronavirus," said Clarke, noting that the region's permanent population of about 70,000 has only a handful of intensive care unit beds.

National Park Service data show that visitors to Joshua Tree have more than doubled over the last decade to nearly 3 million in 2019. So Wednesday's announcement that Joshua Tree would fully close came as a relief, he said, particularly since workers must deal with visitors from around the world

"In this particular instance," Clarke said, "that's a threat to their welfare."

Rutherford, the UCSF professor and a pediatrician, said there is not much scientific data on COVID-19 and outdoor exposure. He said these kinds of viruses are known to be sensitive to heat and drying out, and are particularly sensitive to ultraviolet radiation.

"So if you're outside, it's less likely to be transmitted," Rutherford said. "But it's hardly a guarantee."

Dr. Lisa Miller, an epidemiologist at the Colorado School of Public Health, said it's important that Americans follow the guidance of local health authorities on how to approach outdoor activities.

"Every community is different," said Miller. "We can't just look at a one-size-fits-all. People really need to think about their local community and what's happening there."

In her state, ski resorts shut down in mid-March amid what is usually one of their busiest months. Since then, mountain towns reportedly have seen high rates of  coronavirus, prompting criticism that both the governor and resort owners had been slow to suspend operations.

Despite unique challenges among states, Miller said she believes the crisis should prompt people everywhere to reexamine how they view exercise and venturing out of their homes. "I think people need to be thinking about it in terms of meeting basic needs and not thinking about going somewhere to recreate," Miller said.

"I think it's time to think about how your actions are impacting the larger community."

Nationwide, government officials and advocacy groups are trying to stem the tide of visitors seeking a nature fix amid the pandemic.

The message: Stay away. In Moab, Utah — gateway to Canyonlands and Arches, two of Utah's five national parks — health officials imposed a 30-day ban on new hotel reservations and other overnight lodging.

In what it called an "unprecedented request," the Appalachian Trail Conservancy, which works to preserve and manage the 2,200-mile footpath from Maine to Georgia, urged all hikers to keep off the trail.

And the American Alpine Club published a note March 17 on its website, urging rock-climbers to postpone trips to such popular destinations as Moab and Bishop, California, and Slade, Kentucky.

"These remote towns often have limited access to medical facilities and their closely-knit, interconnected social structures are more prone to the spread of infection," the note read. "… While outdoor time is necessary for each of us during this turbulent period, we need to stay local and limit our interaction with vulnerable communities."

Public health officials are making similar appeals. In the San Francisco Bay Area, one county health officer stunned many Californians with a stark pronouncement March 23 about exercise and venturing outdoors.

"As hard as this is, do not gather in any way outside of immediate households," Dr. Scott Morrow of San Mateo County posted on the department's web page. "As for outdoor exercise, people certainly need to get out, but do this in your own immediate neighborhoods… Do not go into other neighborhoods for recreation."

In some places, residents are even being urged to avoid local playgrounds, a message reinforced by yellow tape, like crime scene barriers, ringing playground structures.

California recently announced it was closing parking lots at many of its state parks and beaches to reduce crowding, while completely closing off others to public access – meaning no bathrooms, no trail access, no campgrounds, no visitor centers. While the state's Department of Parks and Recreation did not have visitation numbers for the year, a spokeswoman said that field staff reported "visitation surges" on two consecutive weekends in March, prompting the changes.

There are signs that some people are adapting to the new normal.

In Sacramento, the American River Parkway — a scenic, 32-mile swath of parks and hiking and biking trails that slices through the county — has been packed, making it a challenge to safely distance from others, according to several residents.

Jeanie and Jim Strathdee, professional musicians who have walked the parkway for decades, recently stopped themselves from rushing up to a mother and teenage daughter who had fallen off their bikes.

"The park ranger almost immediately pulled up and wanted to know if they were a family unit," Jeanie Strathdee said. "I think it's great that they were monitoring – but offering help if they needed it."

Karen Henry, an avid runner and fitness coach from suburban Sacramento, has found her own way to manage the crisis and get exercise. As a trainer for Fleet Feet, all of her classes and events have been postponed, with only virtual training available.

She doesn't venture to the parkway these days.

"As far as I'm concerned, driving to a park is unnecessary travel," she said. "I've been doing all my workouts in my neighborhood."

But, Henry has added a twist: She walks alone while talking on her phone.

"I have a buddy on the phone while walking and we walk together — apart," she said.

"These are weird times. I just wish people could figure out how to do this in their own area."