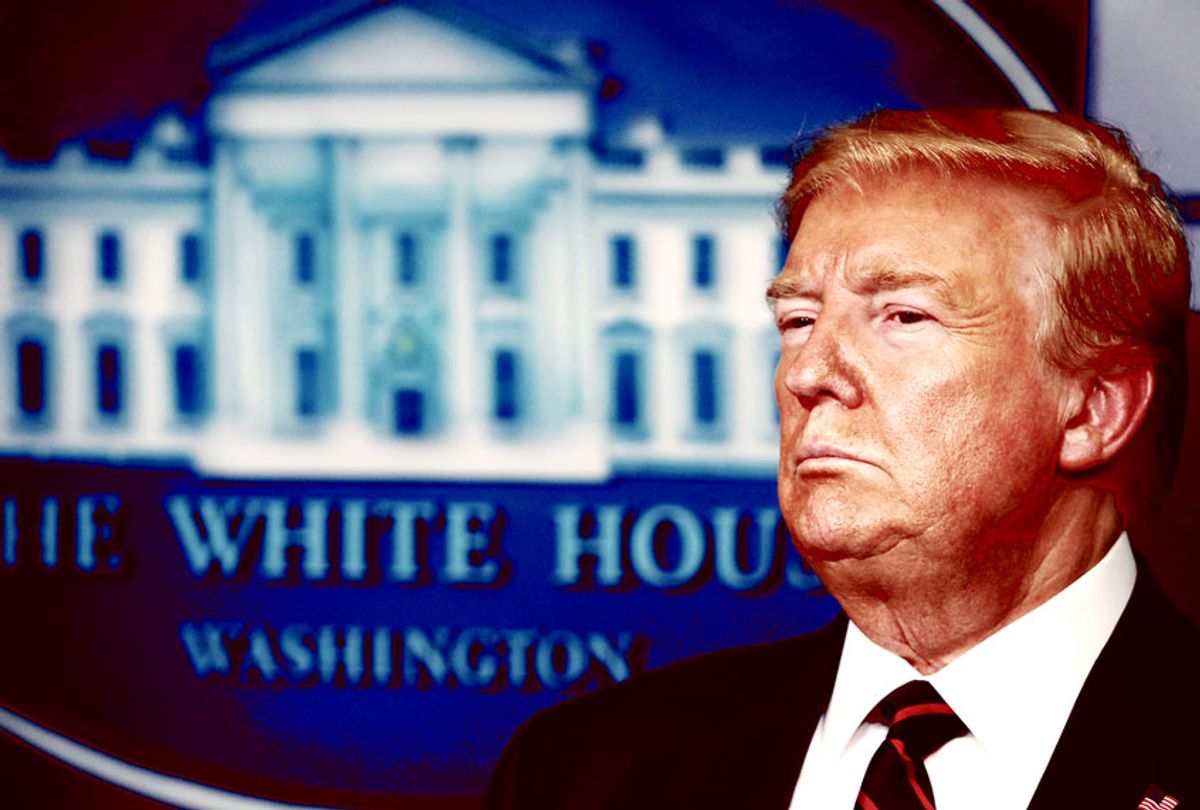 We're all going to know someone who has died of the coronavirus when this is over. The tragic news is all over Facebook and Twitter already. My friend Patricia Bosworth, the actress and biographer, died on Friday of the virus. Everyone has friends and acquaintances who have the virus, family members who have died, favorite musicians or actors and friends of friends who are sick and dying. The virus has taken them from us, but so has Donald Trump with his inaction and lying and childish finger-pointing and failure to take responsibility.

Even the funerals have been taken from us. People grieve alone in apartments and bedrooms, many separated from family and loved ones, and outside our four walls, people keep getting sick and dying. There are photographs of refrigerated trailers lined up behind New York hospitals being used as mortuaries for the dead because there is no more room in the city morgues and funeral homes. Orders have been placed for 100,000 body bags, to remove the dead from hospitals that are overrun with patients dying by the hundreds every single day. The military doesn't even have enough body bags to keep up with the demand, as preparations are made for more people to die than the total of Americans killed in the Iraq, Afghanistan, Vietnam and Korean wars combined. The Army could handle the dozens, even hundreds killed at the height of the wars in Iraq and Afghanistan, but they can't handle tens of thousands of dead bodies to come.

Nobody is ready for what is coming. Already there are stories in the newspapers and on TV questioning the White House estimates of 100,000 to 240,000 dead. The White House officials who devised those models won't provide the assumptions that went into them, and none of the models contained an endpoint for when the virus might run its course and the dying will stop. I just saw a public health expert from the University of Minnesota on MSNBC who dismissed the White House models out of hand and said we're looking at more than a million deaths from COVID-19 before the end of the year. More than a million.

This is chaos on a scale we have never seen before. Much of the chaos is the responsibility of Donald Trump in his role as president of the United States. He actively denied the size and severity of the threat and failed to provide leadership when it counted. This went on for months. As recently as a couple of weeks ago, Trump was crowing about "reopening" the economy by Easter. "We cannot let the cure be worse than the disease," he said only last week. "We've never closed down the country for the flu. So you say to yourself, what is this all about?"

What this is "all about," it turns out, is the re-election of Donald Trump. The Los Angeles Times reports that Trump campaign advisers staged an "intervention" last week, telling him, "Pay attention. You're going to lose the election." Those words apparently brought Trump out of his fugue of denial and earlier this week he allowed the experts on his "task force" to deliver their casualty projections, and even Trump himself finally uttered the words, "Stay at home."

This is a disaster that could have been avoided, of course, but having allowed it to happen, Trump is now trying to use the tsunami of coronavirus illness and deaths to his advantage. He started his daily updates from the White House press room, and as soon as he saw the praise Vice President Pence was getting, he took over giving the main briefing himself. This has left the Democrats in the unenviable position of having no comparable platform from which to campaign. Because make no mistake, Trump's entire campaign is now focused on the coronavirus. The Democrats have already pushed back their convention from July to August and postponed most of the remaining primaries. In the shadow of the virus and Trump's bigfooting of the media, the Democrats have effectively abandoned the campaign battlefield.

Trump's motives at this point are, for want of a better word, sinister. He appears to be using the playbook of Vladimir Putin and Viktor Orban, readying the ground for an election that will have two candidates but only one possible outcome. What we are seeing in Trump's nightly lies and obfuscations and denunciations of Democrats and the media is the beginnings of a Trumpian totalitarianism.

He has seized control of the political debate using his nightly virus press conferences, which are more frequent and last longer than his political rallies. He is gaining control over the media in his choices of whose questions he accepts, taking questions from friendly outlets and belittling outfits like NBC, CNN and PBS. (The New York Times and the Washington Post have stopped sending reporters to the briefings, covering them from outside the press room.) He has gone against rules agreed to by the White House Correspondents' Association by allowing the alleged "reporter" from the OANN network to attend every briefing while representatives of other news organizations have to cycle in and out on a schedule set by rules according to social distancing needs.

Trump has put himself in the position of parceling out the key resources needed during the virus outbreak, and there is evidence he is rewarding Republican states with more essential supplies and shorting Democratic states. Like the cheap autocrat with a bad hairdo that he is, Trump demands subservience and praise from political leaders around the country in return for equitable treatment by the federal government.

But perhaps most remarkably, Trump is using the strictures necessary to control the virus as a form of participation in mass passivity. In her classic book, "The Origins of Totalitarianism," Hannah Arendt pointed to fear of terror as a tool used by totalitarian regimes to control populations.

"Only where great masses are superfluous or can be spared without disastrous results of depopulation is totalitarian rule, as distinguished from a totalitarian movement, at all possible," Arendt wrote. For "depopulation" read "deaths," and with victims of the virus in the tens of thousands and potentially headed for more than a million, Trump has his hands on one of the key levers of totalitarian rule. You can see it nightly on his face. People talk about Trump's "lack of empathy," but as the bodies pile up, I think what we see in Trump is the delight of a dictator in the making. For every dead body wheeled into the back of a refrigerated truck, Trump sees a hundred frightened voters who can be manipulated into adoration of their fearless leader.

But we can beat this worthless lying scum-sucking bastard in November. There are more of us than there are of them, and we can win if Democrats get angry and stay angry and get out the vote. The coronavirus focuses this election like no election before. We can talk about abstract ideas like income inequality, and we can point to real problems like global warming and the need for universal health care, but tens of thousands, even hundreds of thousands of dead bodies will rally the Democratic Party and vote this murdering bastard out of office. We don't have to play by the old Chicago rules and "vote the graveyard." All we have to do is remember those who have been sacrificed to this despicable man's criminal lying and dereliction of duty. Then we need to turn out and vote.