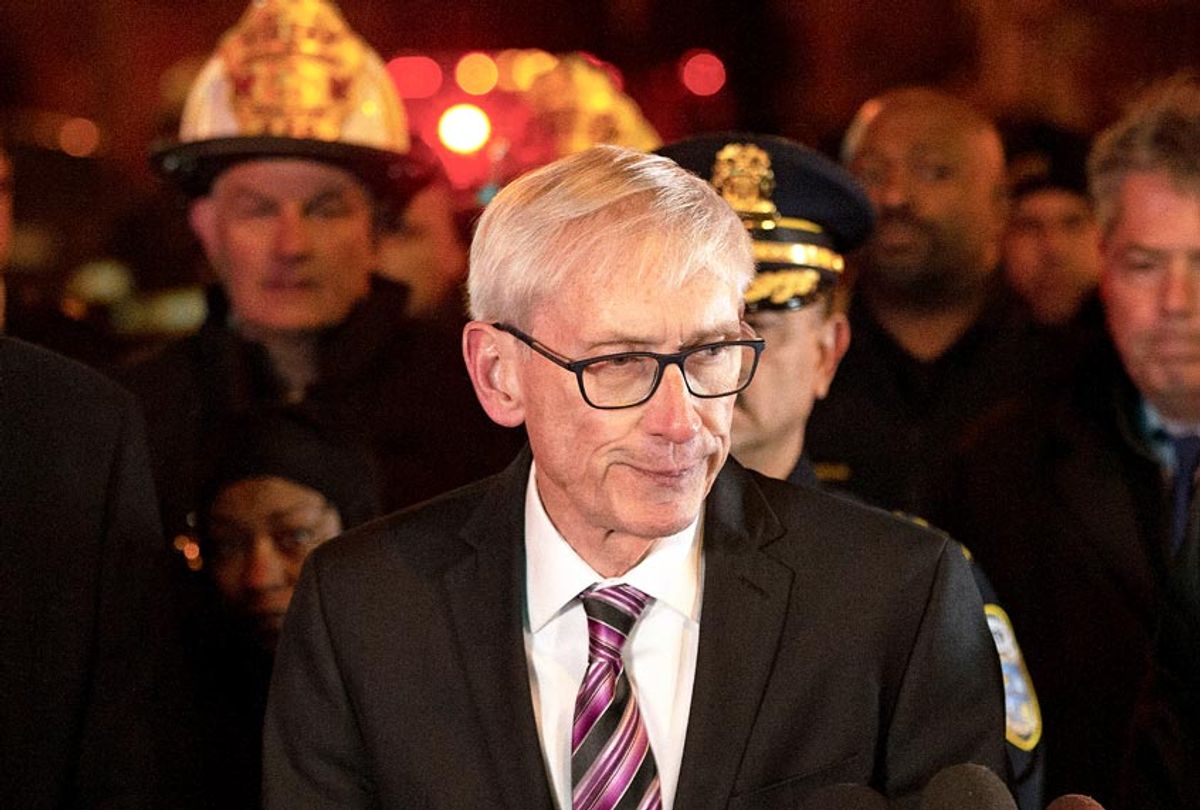 Evers, a Democrat, issued an executive order delaying the election from April 7 to June 9 after the Republican-led legislature refused to scrap in-person voting in spite of the threat posed by the coronavirus pandemic, The Associated Press reports.

"Frankly, there's no good answer to this problem. I wish it were easy," Evers said Monday. "I have been asking everyone to do their part to help keep our families, our neighbors and our communities safe. And I had hoped that the Legislature would do its part — just as the rest of us are — to help keep people healthy and safe. But as municipalities are consolidating polling locations, and absent legislative or court action, I cannot in good conscience stand by and do nothing. The bottom line is that I have an obligation to keep people safe, and that's why I signed this executive order today."

"The clerks of this state should stand ready to proceed with the election. The governor's executive order is clearly an unconstitutional overreach," Assembly Speaker Robin Vos and Senate Majority Leader Scott Fitzgerald said in a joint statement. "This is another last-minute flip-flop from the governor on the April 7 election. The governor himself has repeatedly acknowledged he can't move the election. Just last week, a federal judge said he did not have the power to cancel the election and Governor Evers doesn't either. Governor Evers can't unilaterally run the state."

While other states had already postponed their primaries in an attempt to prevent the spread of the coronavirus at voting sites, the Republican-led Wisconsin state legislature refused to do the same last week. More than 100 municipalities would not have had enough poll workers to open a single voting location, according to The Washington Post.

Neil Albrecht, the head of elections in Milwaukee, said the city only had 400 of its usual 1,400 poll workers because of concerns of contracting the virus, NPR reports. Statewide, there is a shortage of about 7,000 poll workers. Most of the polling workers are over 60, putting them at high risk of severe illness if they are infected.

Albrecht told the outlet that Milwaukee planned to go into the election with just five voting centers for a city of 600,000 people.

"I come from a place of election worker and public safety first and foremost. And then, of course, access to voting. But, at the end of the day, we shouldn't be putting our election workers or the public at risk," he said, adding that his office had "been taking literally hundreds — if not thousands — of phone calls per day from voters concerned about how they are going to vote."

Evers called the state legislature into a special session Saturday to vote on a bill that would allow an all-mail election, extend the deadline for submitting ballots and lift the photo ID requirement. Republicans refused to take up any of the issues, with GOP leaders adjourning the session in a matter of seconds.

The governor and state officials initially resisted moving the primary, which along with the Democratic presidential race will include a number of statewide and local races. The governor did not ask for the delay until Friday.

Republican leaders argued that it was important to hold the election on April 7 to avoid vacancies in local offices. Unlike other states, Wisconsin will hold some general elections on the same day as their primary elections. The leaders called attention to an exception for people to get take-out at restaurants in Evers' stay-at-home order made.

"Hundreds of thousands of workers are going to their jobs every day, serving in essential roles in our society. There's no question that an election is just as important as getting take-out food," Vos and Fitzgerald said in a statement.

But neither leader addressed how cities are expected to handle elections with massive staffing shortages. Vos has urged poll workers to volunteer in spite of the health risks.

"If you are bored at home and sick of watching Netlfix, volunteer to go and help at the polls," he said last week.

Evers previously said that only the legislature had the power to move the election.

"This is a significant concern and a very unnecessary public health risk," Evers said Friday, according to the Milwaukee Journal-Sentinel. "I can't move this election or change it on my own. My hands are tied."

Vos and Fitzgerald argued that "if the governor had legitimate concerns, we could have come to a bipartisan solution weeks ago."

"It's a stunning lack of leadership, vision and empathy that they can't imagine making changes as this public health crisis evolves," a spokesperson for Evers said in response.

Fitzgerald said in a news conference that he saw no reason to postpone the election despite the health challenges and staffing shortage.

"I understand things are getting much different out there, and there are obviously a lot of concerns about what an election would look like on April 7, with the amount of poll workers and volunteers that we're going to need," he said. "We're monitoring it very closely, but at this point, I don't see a change really to the April 7 date."

A federal judge also refused to postpone the election unless there was evidence that hundreds of thousands of people would have their voting rights limited, which would not be available until after the election took place.

"Let's assume that this is a bad decision from the perspective of public health — and it could be excruciatingly bad," U.S. District Judge William Conley said. "I don't think it's the job of a federal district judge to act as a super health department for the state of Wisconsin."

Conley did extend the deadline to submit absentee ballots until April 13 and ordered the state to waive requirements that a witness must sign their ballot. Republicans appealed the ruling to the Supreme Court, asking them to bar ballots submitted after April 7 from being counted.

Meanwhile, more than 1.26 million absentee ballots have been requested — nearly six times more than the number cast in the 2016 presidential election. However, the state is not equipped to handle the surge of ballots, because it is more than the state has ever seen. Evers said Monday that all ballots already cast would be counted.

The reduction in polling sites, particularly in Milwaukee, raised questions over whether the closings would lead to overcrowding after the state ordered a ban on public gatherings. Evers had asked members of the Wisconsin Army National Guard to help staff some precincts.

"We're very concerned about that, in terms of the community gathering at a voting site on election day being contradictory to public health guidelines," Albrecht told the Journal-Sentinel.

"My fear is that our election in Wisconsin might be the largest public event in the country in April," Milwaukee Mayor Tom Barrett added. "This fantasy that somehow, well, it's an election and people aren't going to get sick. I think it's so irresponsible, so irresponsible for us to go down this path."

Two members of the Wisconsin Elections Commission sent a letter to Vos and Fitzgerald blasting them over their "failure to address these profound issues and the safety of all Wisconsin's residents" as an "abdication of your constitutional responsibilities."

"In the face of a deepening and escalating COVID-19 crisis, forcing an in-person election on Tuesday not only threatens the voters, the clerks and election staff, it threatens everyone those people subsequently come into contact with at home and elsewhere," the letter said.

A group of 10 mayors, including Barrett, issued a last-ditch appeal to the state's top health official asking her to intervene.

"We need you to step up and stop the state of Wisconsin from putting hundreds of thousands of citizens at risk by requiring them to vote at the polls while this ugly pandemic spreads," the letter said. "We believe it would be irresponsible and contrary to public health to conduct in-person voting throughout the state at the very time this disease is spreading rapidly."