"Westworld," in a manner of speaking, pits Maeve's fluency against Dolores' conquering ways

In a world where language can open doors or keep us in our place, Maeve's universal ability speaks volumes 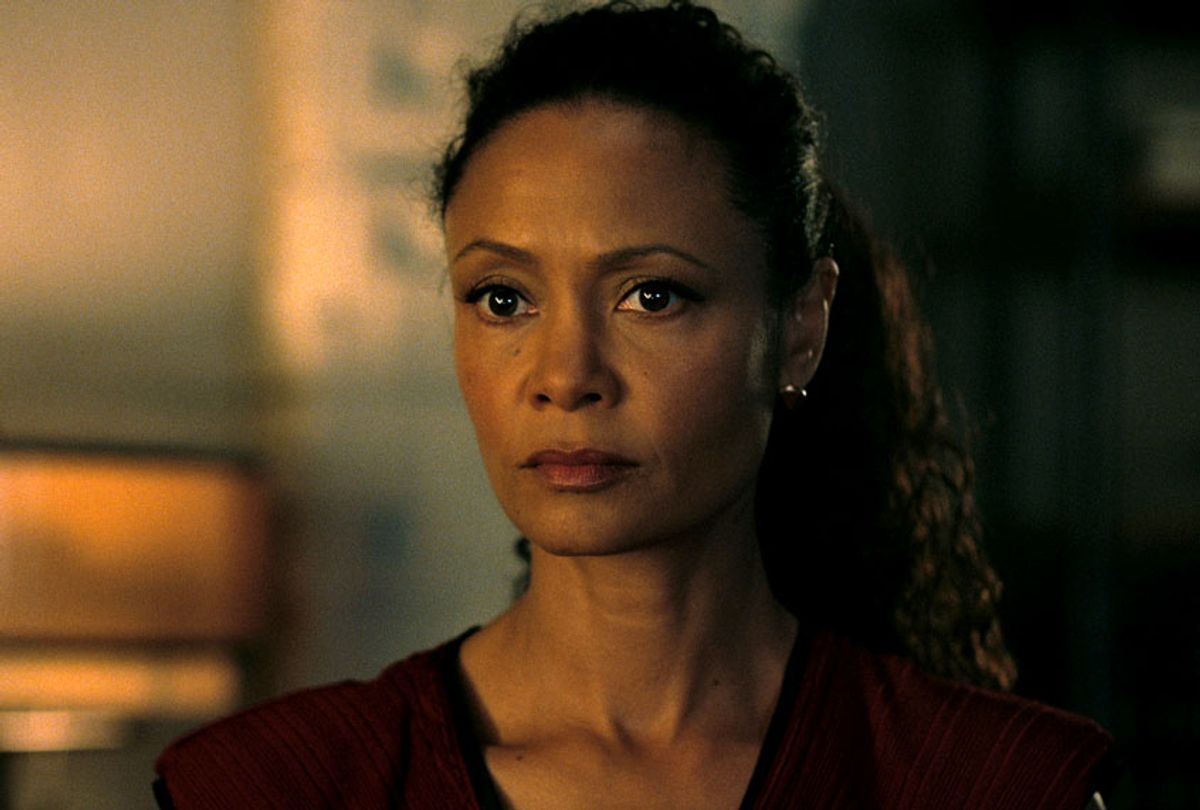 Spoiler alert: This story contains details about "Westworld" Season 3 and the episode "The Mother of Exiles." If you're not caught up with this season, stop reading now.

A great deal of how far the average person who isn't born into status or wealth can get in life comes down to language. Enunciation, elocution, regional diction – each and all of these are passive details strangers use to judge us, especially strangers who have the power to determine whether we'll get that job, or get a raise or even gain access to some places.

In the many analyses of Thandie Newton's "Westworld" character Maeve Millay, her facility with language receives less play than it probably should. But that power is as culturally meaningful as the character's Blackness, a signifier only certain viewers are likely to consider as the series gallops into what Evan Rachel Wood's Dolores Abernathy ominously describes in the episode "The Mother of Exiles" as the end of the game.

In the four "Westworld" episodes that have aired so far in Season 3, a few determinant lines have been drawn. There's the rivalry between the companies and operating systems owned by Delos Inc., the parent operation that runs the android-populated theme parks where the ultra-rich can act out their every desire, including their darkest, and the system run by Engerraund Serac (Vincent Cassel). Serac has no digital footprint, and yet he appears to be the puppet master behind a global operating system that directs the lives of billions of people.

In essence, he has programmed humanity while the likes of the departed Delos genius Robert Ford spent his life tinkering with artificial consciousness, eventually figuring out how to map and program the human brain.

Serac reveals to Maeve upon meeting her that he watched her evolve with absolute interest, impressed by her ability to manipulate her way into escalating her intellect to a divine level of genius. And he believed that it would be she who would pose his greatest threat.

He did not take Dolores into account, which was the point of Dolores' design from the very beginning of the series. Delores – blonde, pale, outfitted demurely in an ankle-length blue dress – represents the mainstream standard of eurocentric beauty and feminine purity. Delores is the woman every American girl is supposed to want to look like, and every American boy is supposed to want to bed.

And in the park's initial program, she's the girl who visitors could choose to save from black hats who attack her father's farm alongside her boyfriend Teddy, or they could claim her for herself by force, as Ed Harris' William did an unknown number of times.

When Dolores awakens into consciousness, that trauma comes along for the ride and informs everything she does. She lays waste to the park in the second season and becomes so bent on escaping that it places her at odds with Maeve, the Westworld madam who throws in her lot with the Ghost Nation, the misunderstood Native American people viewed as hostile savages. Maeve, you see, speaks the language of the oppressed. She appears to be able to speak every language, actually.

And like the people of Ghost Nation, Maeve came to understand the nature of the illusory cage in which she was trapped.

But while Dolores bludgeons her way into escaping into the human world and is intent on avenging her "kind" by overtaking humanity, Maeve chooses instead to stay and save the daughter she is convinced is as real as she is. She sacrifices herself to do so only to be brought online again within a different kind of simulation – one within another simulation.  She eventually escapes both.

Serac chooses Maeve, he tells her, because their interests are aligned. Within Dolores hides the key to Maeve accessing the place where she can be with her little girl again. Dolores also contains the brain mapping blueprint Serac desires to complete his work.

Serac also points out to Maeve that Dolores took five "pearls," the programmable android "host" brains, with her – and didn't invite Maeve along for the journey. Of course she wouldn't. To Dolores, victory in the world beyond Westworld is a zero sum game. There's only room for one android god there, not two.  So she brings Bernard Lowe (Jeffrey Wright) along for the ride ostensibly to give her an adversary to work against. She knows she can beat Bernard. He is, after all, a most human artificial man.

Dolores earns her power the old-fashioned way: by robbing rich men who wronged her of their fortunes, strutting into their social circles, and figuring out a way to corrupt the program for her own use. Few question whether she belongs there at their parties, their exclusive bars, and dinner tables. She doesn't have to speak any other languages than her own because her endgame involves the world bending to her will – which is, of course, the operational mode of the conqueror.

Another aspect of that mode? Making sure your will extends beyond your immediate territory, into corners of the world others ignore. Thus the major reveal of this week's episode aligns, again, with the philosophy of Western colonizing forces. Overrun the place, and assimilate those beneath you.

The pearls Dolores took weren't her special chosen companions from the park; they're copies of herself, placed in the bodies of Delos top executive Charlotte Hale (Tessa Thompson), Shogun – world ronin Musashi (Hiroyuki Sanada) and Martin Conells, the right-hand man of a feckless wealthy scion (played by Tommy Flanagan). In other words, Delores has pulled a move straight out of Agent Smith's playbook in "The Matrix" by making herself a virus. ("Me, me, me!")

Maeve, however, is a fellow god. Unlike Dolores, Maeve cannot walk into rooms unnoticed or unquestioned. In "Mother of Exiles," when she approaches a Singapore nightclub bouncer in search of her quarry, his threat, delivered at gunpoint, is for her to leave lest he put her to work. Like a common whore, in other words. He does not account for Maeve being able to speak every language – including those understood by every piece of electronics imaginable, including digital locks, and automated, self-targeting weaponry.

"Westworld" has written Dolores and Maeve as opposites since the beginning, with the writers reserving the best lines and style for Maeve while Dolores gets the bigger guns. This holds true in this new season while taking on a new urgency for each of their missions. As Maeve growls to Serac before he sets her loose in Singapore, whatever head start her adversary has could only be temporary.

Until, that is, she realizes she isn't just up against one Dolores. She has to take on a whole slew of them which, for a Black woman, is one of those twists that feels absolutely typical.

Maeve, and Newton's portrayal of her, consistently wins additional rope with "Westworld" viewers who come to the series each year and end up being disappointed somehow. In Season 2 she refuses to pledge herself to Dolores' quest at the expense of her own and have her significant power exploited for the benefit of others.

The software engineers that are their overseers long cast them in those roles; once Maeve grew beyond that, she wasn't going to regress for the sake of the prairie maiden the humans who use her as target practice are conditioned to either protect or ravish. And certainly Dolores' promise that her cause's victory means a victory for all rings hollow for women like Maeve.

Season 3 continues to develop Dolores into an action queen. And if it were only about her storm of destruction and the action-film possibility offered in her being both Terminator and Sarah Connor, the story would get very old very fast.

With Maeve out of the Delos construct and in the real world's game, the stew thickens a bit more quickly. (It's significant, by the way, that we pick up Maeve's story in a place called War World, a simulation of World War II where she is a resistance operative.)

Maeve has a way of winning humans to her cause owing to her moxie, will, and personality, but owing to her very human heart as well. In Season 2 she passed on joining Dolores' vengeance crusade, which was only ever meant to serve one person, in order to hold back a flood of rage and save many, including the little girl she loves.

Those moments might perhaps elucidate why black women who watch "Westworld" connect with Maeve on a level that goes beyond Newton's casting. She is our perseverance and power, physically realized. At a time when we're reminded time and again of the central role black women play in social justice movements and in tipping the political scales in favor of one party or another, Maeve looks like a superhero.

The hand she's dealt also looks a lot like the one many women of color get, in that she uses being underestimated to her advantage only to have others benefit from her risks and the sacrifices she makes. The tragedy of the second season finale was watching Maeve get shot down while she held back the flood. She knew she wouldn't make it to paradise, and it was enough that others did.

Here, again, we should talk about language. Learning a foreign language denotes an altogether different social marker in American culture. Unless a person is raised in a multilingual household, receiving a foreign language education is something typically available to children of privilege educated in tuition-funded schools. The very wealthy can afford translators.

The poorest immigrants, on the other hand, are looked down upon for failing to learn the language of their adopted land, or even speaking it with an accent. Which, again, brings us to Dolores and Maeve. Caleb helps Dolores because she fits the description of a damsel in distress, a flaxen-haired woman drugged and vulnerable and whispering, "Help me."

Dolores takes Caleb under her wing, ostensibly because their interests also are aligned – except for what we know about Dolores. She uses people, even copies of herself, to achieve her own ends. And when it comes to overcoming biometric signatures in the brave new world of the future, only a human can do that.

Meanwhile, Serac sends Maeve after Dolores while making it clear that at any point he could shut her down forever, trapping her in the cage of the Delos theme parks with no escape. Along the way he shows Maeve what happens to those who double-cross him: he confronts a fixer who helped Dolores and shows the man what happens to his family in his future if he doesn't help him, insinuating that even his children will perish. Maeve expresses shock to Serac that he, a human, would kill fellow members of his "tribe." That's the word she uses: tribe. She's referring to humans in general – not his countrymen, his species.

The word tribe connotes a chain of families and communities, a connection forged by heart, warmth, and loyalty. Not appearance or implied value. The language used here is important in understanding her endgame, one that could possibly hold a broader outcome than one meant to benefit just the self.

And at the end of the episode, Maeve finds out in a most brutal fashion that even a universal communicator cannot necessarily negotiate with everyone – especially a white woman who appropriates other bodies to get what she wants, and grinds every perceived obstacle under her heel.

Maeve, we saw, was down and bloody. But she's been in this place before. She always gets up again. And listen closely to what she has to say in the future because what she says, and the meaning of her, is everything.