Reporters only learned about Gov. Tate Reeves' order after a neo-Confederate group published it on Facebook 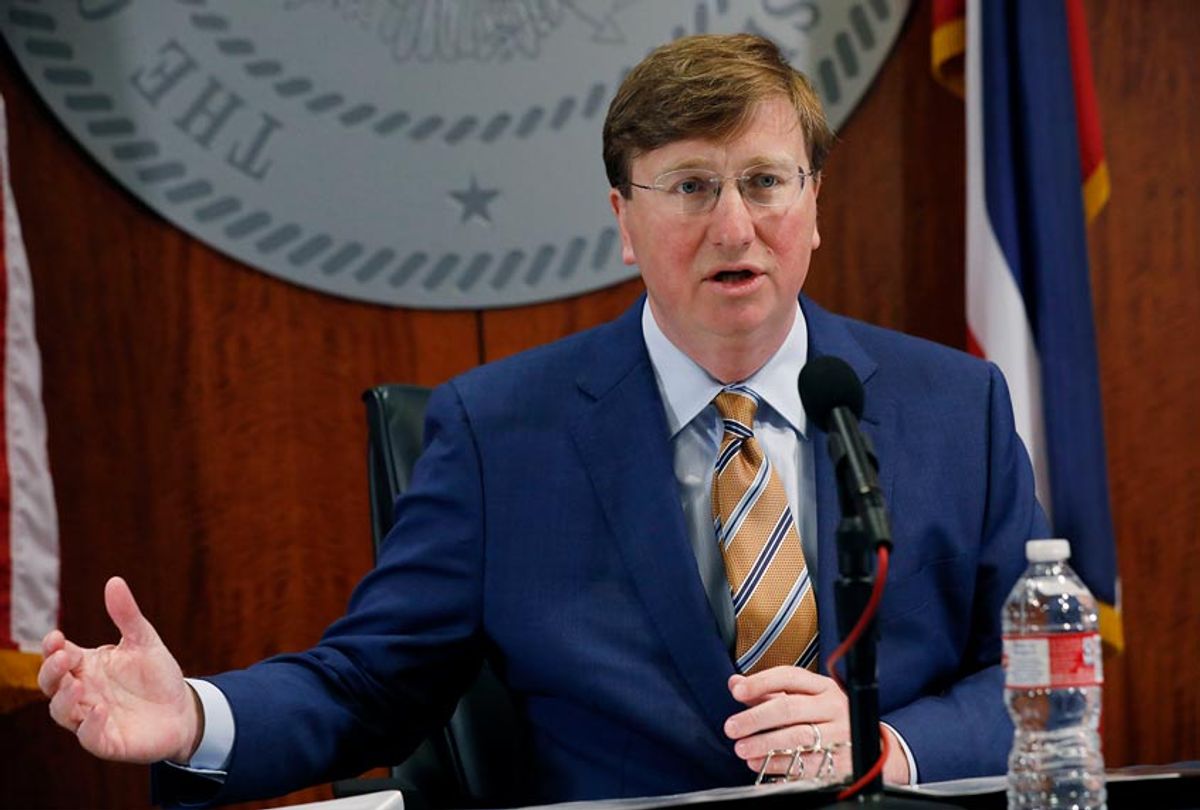 Mississippi Gov. Tate Reeves has declared April "Confederate Heritage Month" even as the state responds to a growing number of coronavirus cases.

Reeves, a Republican, said in an order that this April marks "the month when, in 1861, the American Civil War began between the Confederate and Union armies, reportedly the costliest and deadliest war ever fought on American soil."

Reporters in the state learned of the proclamation after the neo-Confederate group Mississippi Sons of Confederate Veterans posted a copy of the document on Facebook, according to the Jackson Free Press.

"God bless the Confederate Soldier. He shall never be forgotten," the group said.

The proclamation was signed on April 3, two days after Reeves reversed course on his opposition to a statewide lockdown and issued a stay-at-home order. The state has reported more than 1,700 confirmed cases of the coronavirus and 51 deaths.

Reeves, the state's former lieutenant governor, spoke at a Sons of Confederate Veterans in 2013. The group is well known for falsely arguing that the Civil War was not about slavery.

Reeves is also a former member of the Kappa Alpha Order at Millsaps College in Jackson, HuffPost reported, a college fraternity "known for pro-Confederate displays and run-ins with black students."

When Reeves was a member in the mid-'90s, fraternity members "donned Afro wigs and tied large Confederate flags around their necks," the outlet reported. Members also wore blackface and got into a shouting match with black students over the attire.

"As a quick Google search will show, Lt. Gov. Reeves was a member of Kappa Alpha Order. Like every other college student, he did attend costume formals and other parties, and across America, Kappa Alpha's costume formal is traditionally called Old South in honor of the Civil War veteran who founded the fraternity in the 1800s," Reeves' spokeswoman said in a statement last year.

Reeves denied that he was racist at the time his membership surfaced.

Reeves' predecessor as governor, Phil Bryant also quietly signed an order declaring April "Confederate Heritage Month" in 2016. Like Reeves, Bryant did not publicize the proclamation and it was only discovered by reporters after a museum devoted to Confederate President Jefferson Davis published it online, according to the Jackson Free Press.

Unlike Reeves, Bryant, a member of the Sons of Confederate Veterans, put all of the responsibility for the Civil War on the South. He made no mention of slavery.

"April is the month when the Confederate states began and ended a four-year struggle," Bryant's order said.

But Bryant decided against declaring a "Confederate Heritage Month" in his final year in office, instead declaring April a "Month of Unity" in 2019.

Bryant made that proclamation at the urging of Unite Mississippi, a Christian nonprofit that focuses on racial reconciliation, according to the Jackson Free Press.

Reeves, who was part of Bryant's administration, at the time defended the state's flag, which includes an image of the Confederate flag.

"Nearly two-thirds of our state voted to keep our current flag," he said at the time. "If the citizens of our state want to revisit that decision, and I am sure at some point we may, it will best be decided by the people of Mississippi, not by outsiders or media elites or politicians in a back room."