Now is not the time for Quibi, the new streaming service for your phone 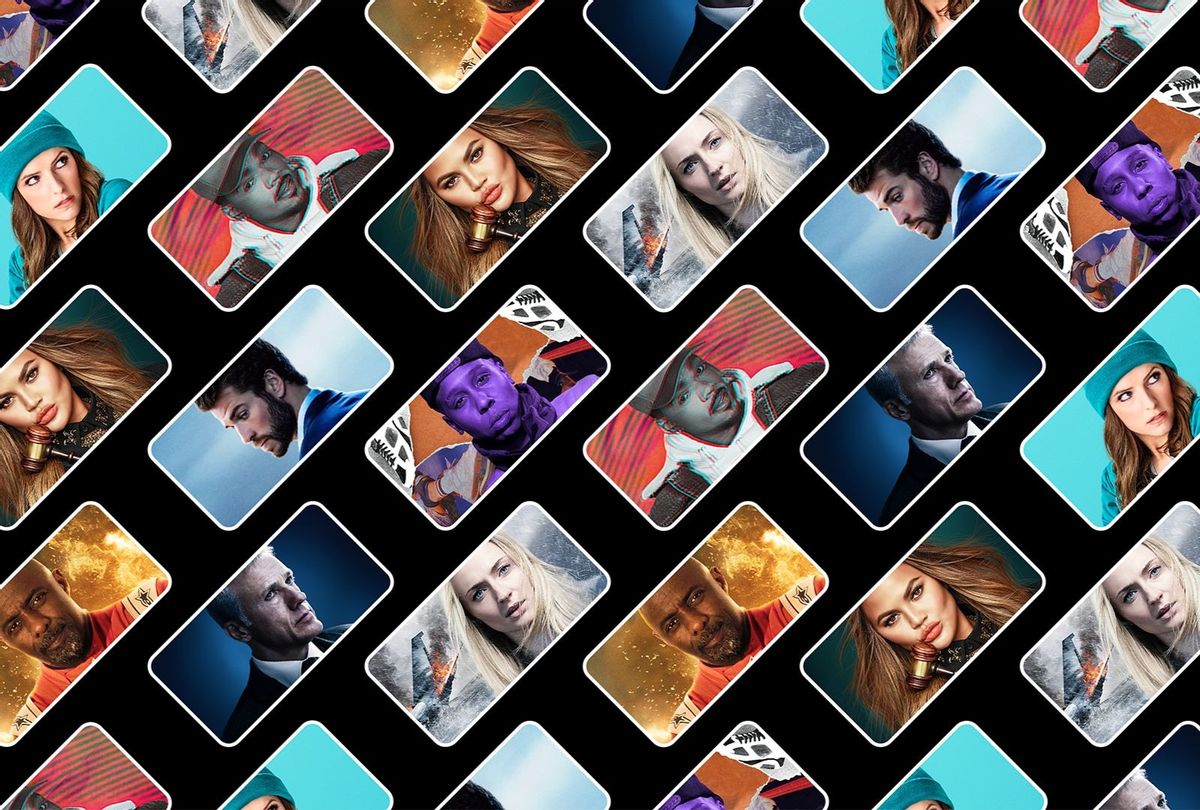 To hear responsible spiritual leaders, wellness gurus and friends who may be slightly more enlightened than you are tell of it, now is a time to be still.  To indulge in contemplation and deep breathing, and contemplate what is best in life.

Anecdotally speaking, in whatever amount of downtime a person may have, you may also have heard that now is the time to read that book you've been meaning to get to, or revisit the comfort of favorite films or beloved TV series. Maybe you've noticed, for example, the marathons of long gone shows popping up on cable schedules. Soon, in fact, broadcast channels will begin dedicating Sunday nights to movies again, just like in the olden days.

With nearly every ongoing television and film production on hold, now is a great time for that.

It's probably not the best time for Quibi, though.

Maybe you're heard of this confusingly named new streaming service, a platform brought to us by DreamWorks co-founder Jeffrey Katzenberg and steered by CEO Meg Whitman. Quibi, so named to describe its mandate of delivering "quick bites" to viewers on the go, is dedicated to shortform original programming. At of its April 6 launch, it has 24 series to choose from, each consisting of episodes of under 10 minutes apiece.

In response, should you be asking yourself, "How does this differ from stuff made by talented average Joes and Janes that's currently available to me for free on YouTube or Vimeo or even Facebook?" I can only respond with, "Right?!"

Then I would walk that back and say, well, okay, Quibi series also feature name-brand celebrities like Chrissy Teigen, Will Arnett, Nicole Richie, Lena Waithe, Sophie Turner, Liam Hemsworth and – ooh! – Oscar-winner Christoph Waltz. Within its current catalog one can find comedies, dramas, documentary series, an action thriller or two, a couple of parody versions of unscripted reality series and a whole lotta tragedy.

Whereas YouTube has about a 15-year head start on Quibi. (Maybe 2005 was the right time for Quibi?)

There are also a few gems that manage to win that designation because their creators obviously understand the frivolous nature of product their show is tasked to represent. For example, No. 1 on this very short list is "Dishmantled," hosted by Tituss Burgess, a man who is watchable in just about everything he does, including commercials for cleaning projects.

Here, Burgess is the ringmaster for a culinary competition that blends elements of Bravo's "Top Chef" with Netflix's gleeful cake fail series "Nailed It!" with the ridiculousness of a Japanese game show. Contenders suit up from head to toe in what looks like hazmat gear and take the full force of a several cannons blasting food at them. They have a short window of time to taste whatever it is that hits them in the face and then, based on what their palate discerns, deduce which dish they're covered with and prepare it well. The winner gets . . . to win.

Each episode's action goes down in around six minutes, and that's about right for a series that is essentially a glorified and one-sided food fight. Even more importantly, "Dishmantled" is not a series that begs to be chewed over, digested or contain any lasting nutritional value beyond those wee bites. It is served: it passes before our eyes; and it is done. We may move on.

Other Quibi content utilizes the format with equal efficiency while plying a certain level of gravitas. The best example of this concept being the Mark Wahlberg executive produced documentary series "Run This City," an entertaining political rise-and-fall story of Fall River, Massachusetts' youngest mayor ever, a 23-year-old named Jasiel Correia II. The opening episode initially pitches the protagonist as a cool underdog only to turn and immediately reveal that, well, he might actually have been a weaselly scam artist. Series director Brent Hodge teases all of Correia's sides in its expedient first episode, which makes a person want to watch more episodes – easily done, since they're all so very short.

Director Marc Levin's "I Promise" employs the same level of skill with the medium's demands and limitations, achieving an admirable emotional richness along the way as the series follows the kids and teachers at an experimental alternative school striving to succeed despite the many obstacles in their way. You merely have to overlook that these moving stories have been sculpted to promote LeBron James' Akron, Ohio school of the same name, in a series that James is executive producing.

Quibi has a few slickly produced and rendered series that showcase subcultures and corners of life that might otherwise be left unexplored or underground, such as Waithe's nimble ode to sneak culture "You Ain't Got These," or "Drag Race" winner Sasha Velour's behind-the-scenes view of her lush drag cabaret "NightGowns," or "Memory Hole," Arnett's perfectly fine clip-show for the underserved Children of the '80s demographic. (For god's sake – yes, that's a joke.) Those are all dandy. Heck, I'd even watch a string of Nicole Richie's satirical music videos featured in her series-in-miniature "Nikki Fre$h" as long as I didn't have to also watch the lifeless skits to which they're attached.

So yes – lots of stuff on Quibi is fine. Hell, even Reese Witherspoon has a show on Quibi that's perfectly swell. I'm just not sure that I'd be willing to pay for it at the moment.

In a recent Vulture piece Katzenberg was quoted reminding people that when HBO first launched there was the assumption that people would never pay for TV, or that when iTunes was first proposed, few believed consumers would be willing to pay for one song instead of buying entire albums. In both cases the public demonstrated its willingness to fork over cash for such content.

In the case of premium cable, or paid TV series, the reason is simpler to understand. Pay-TV services exist beyond the scope of FCC regulation. This means that the likes of HBO, Showtime, Starz, and even basic cable channels can feature content that doesn't have to adhere to the same language, violence or sexuality restrictions that broadcast does.

Of course people were willing to pay for that.

For similar reasons, people who want fewer ads or ad-free series and films fork over monthly subscriptions to Netflix, Hulu and other major streaming services. With Amazon Prime you get series, movies, and free shipping on stuff. Want all the Disney princesses and Baby Yoda you can handle? That's what Disney+ is for.  On and on it goes.

A closer comparison in Quibi's case would be YouTube, Twitch, and Vimeo, platforms that have served as launching pads for series and stars that have gone on to be featured on all of those aforementioned platforms. YouTube has ads, but also has the free go-to service for bored people desiring quick-hit distractions on their phone wherever they may be. The very same people Quibi is courting. The very same people who are, in large part, no longer on the go.

And may no longer have jobs to go to.

And might balk at the idea of forking over $5 a month to watch these mobile-only series shot in a way that optimizes a device's viewing experience, or $8 to go ad free.

Mind you, if said shows were great, perhaps it would be worth it. Maybe. But with the exceptions of the ones I called out before, nothing currently offered on Quibi meets that qualification. Either it is trading in slimmed-down remakes of ephemeral MTV classics like "Punk'd" (with Chance the Rapper standing in for Ashton Kutcher) and "Singled Out" (with Keke Palmer and Joel Kim Booster stepping in for Chris Hardwick and Jenny McCarthy) that are utterly forgettable, or it offers stories that should have been realized as feature-length films or standard-length TV episodes.

The latter proves to be more frustrating, actually, as demonstrated in "Survive," a tough drama about mental illness and survival that is beautifully shot to make the most of the mobile screen experience, and confidently edited to maximize narrative power. "Game of Thrones" star Sophie Turner leads the ensemble with a thoughtful performance. I could barely get through the first short segment in part to the heavy, grim content illustrated by dialogue such as, "If I could, I'd kill myself right here, right now."

This is not what I want to watch right now.

Not even the Hemsworth-Waltz vehicle "Most Dangerous Game," a moody action thriller remake of a movie that was based on a classic short story, overcomes its limitations. It spends three episodes, i.e. the better part of half an hour, setting up the why and how of the "game." That's classic "it gets better"-itis at work, and guess what? Even though the Quibi format makes every bite shorter, three Quibis still feels like an awfully long time to be revving your engine in park.

You'd be better served reading Richard Connell's short story. I mean, you probably have the time.

As for the rest of it, while it's true that these snippets of serialized content have bonafide stars leading them . . . so what? I mean, I love Chrissy Teigen as much as the next person, and "Chrissy's Court" offers her in place of Judge Judy with the added bonus of fancy Ruth Bader Ginsburg-style collars. But her Twitter feed is probably more engaging and, yes, free of charge.

The subscription question isn't really Quibi's main problem, though, especially since the service is offering a free 90-day trial for anyone who signs up right now. No, a more significant problem is that there isn't much offered on the service at the moment worth contemplating further than the moment in which it is consumed.

That's the limitation of short-form content lacking in depth or substance; it fails to stick in our minds, and therefore we don't talk about it. If we're not talking about it, it can never build a base of resonance within the wider culture. It's an entire mobile channel constructed out of memes with a high production value, which is fine. Except that memes have a limited shelf life.

Quibi may live on long enough to find a series that makes it necessary and desirable and worth shelling out another subscription fee. However, the road behind us is littered with small, specialized streaming services with shows featuring famous people, most if not all of which could be accessed on our phones, tablets and what have you. Despite that history, there may yet come a time for us to embrace Quibi.

But now is not it.