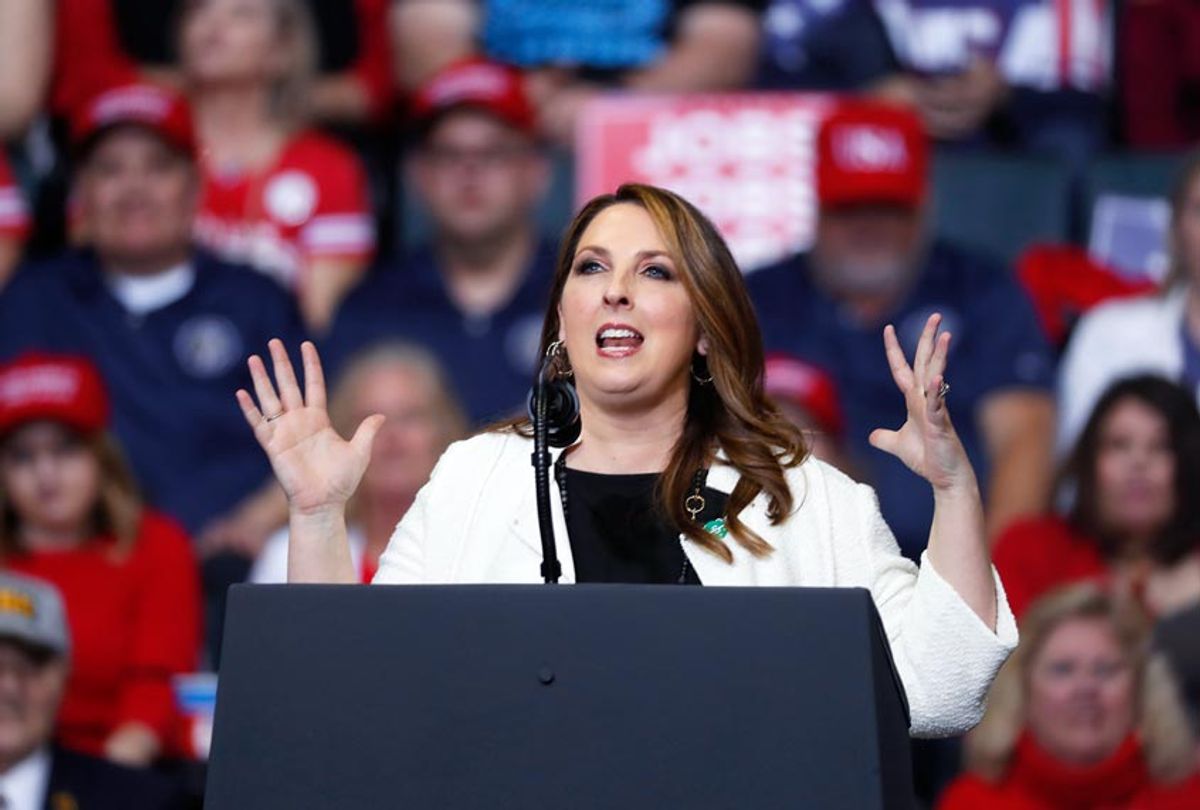 Republican National Committee Chairwoman Ronna McDaniel wrote a Fox News editorial this week denouncing Democratic Party efforts to expand access to mail-in voting as "their next attempt to use the pandemic for political gain."

After claiming that Democratic leaders' efforts to expand voting access is analogous to their supposed "left-wing laundry list disguised as coronavirus relief," McDaniel pointed Monday to efforts by House Speaker Nancy Pelosi, D-Calif., and former Vice President Joe Biden to increase options for people to vote without having to do so in person.

McDaniel claimed that doing so would "vastly expand opportunities for fraud and weaken confidence in our elections." In response to Pelosi's call to "really democratize our whole system," McDaniel retorted: "Pardon those of us who thought we already had democratic elections."

She added, "The Democrats' all-mail ballots proposal is a ruse to legalize ballot harvesting nationwide. Any person would be allowed to return an unlimited number of absentee ballots for voters, opening the door for political operatives to deliver ballots in bulk. They could even be paid, as long as he or she is not paid based on the number of ballots returned."

McDaniel also complained that "all voters 'eligible to cast a vote' would receive a ballot. The problem: many states do not clean up their voter registration lists unless forced to." She cited examples of this happening in states like California and New Jersey, concluding by pointing to a 2012 article in The New York Times and a 2016 interview with election law expert Richard Hasen to reinforce her claim that vote-by-mail would increase voter fraud.

"I think there's two takeaways from her editorial," Marian Schneider, president of the nongovernmental and nonpartisan voting rights organization Verified Voting, told Salon. "First of all, the premise that our nation's elections were working for all voters is just not a valid premise. We've seen that over and over again. There's so many barriers to voting for so many voters in this country that it's a nonstarter to even say that the way we deliver elections in this country works for everybody."

She added, "The second takeaway is that we are in the midst of a public health crisis, and we have to look at how we're going to deliver the election in a way that keeps voters and poll workers alike safe. And I do think vote-by-mail has a role to play, but Verified Voting is, of course, focused on election security. That's our mission, and we have some top-line recommendations for states that are ramping up vote by mail that would address security concerns."

Schneider told Salon that a number of measures could be taken to protect voter rights. These include ballot tracking, so voters can monitor their ballots both when they are being sent to them and after they have been mailed out, using verification processes to authenticate their identities and making sure ballots are designed in a secure and easily comprehensible fashion.

"I don't know that there is as much wholesale fraud as she is alluding to in an article," Schneider said. "But there are ways to address some of the concerns that she raises."

Schneider concluded that ballots should be mailed to all registered voters, but "there have to be other options in case those ballots don't reach their destination. So that's what I think some of the in-person options are. There are going to have to be some in-person options, because vote-by-mail doesn't work for everybody."

While McDaniel claimed to be concerned with maintaining the integrity of America's democratic process, one election expert pointed out that Republicans would be expected to benefit by limiting absentee and early voting.

"Whatever the truth of it is, both major parties seem to believe that Democrats benefit if absentee/early voting is expanded in a given state," Kyle Kondik, managing editor of election handicapper Sabato's Crystal Ball, told Salon by email. "That seems to inform both party positions on these disputes, which of course have been made more salient because of the public health crisis and its uncertain implications for the fall."