Trump isn't trying to persuade anyone of anything. He just wants to dominate the conversation — and it's working 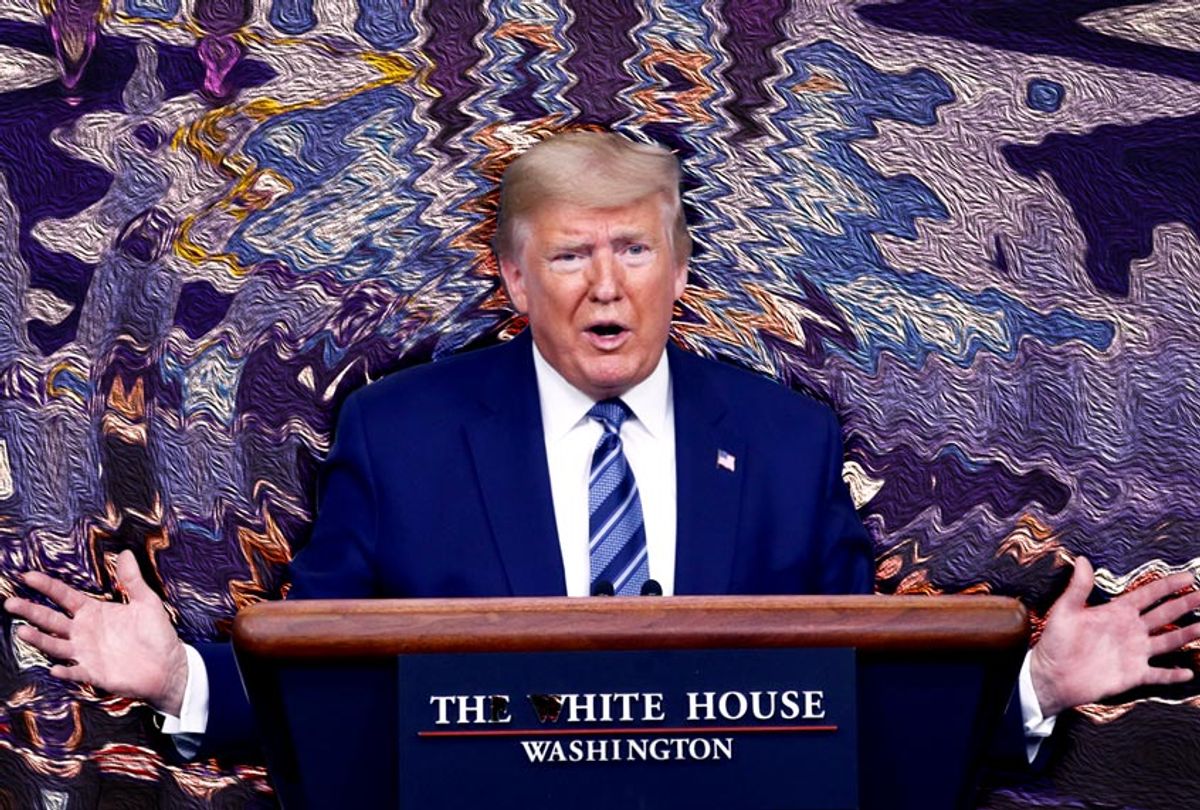 During the Obama administration, a popular meme among online pundits and analysts concerned what Dartmouth political scientist Brenden Nyhan dubbed the "Green Lantern Theory" of politics, which held that "the president can achieve any political or policy objective if only he tries hard enough or uses the right tactics." It was evoked often as a shorthand riposte to Democrats who felt that President Obama wasn't living up to his promise to "bring change" to our politics.

I was sympathetic to that view much of the time because the GLT doesn't account for the fact that the Congress and the courts have equal power to enact or block a president's agenda. Having observed the ever-expanding extremism of the Republican Party with growing alarm for many years, it seemed unlikely to me that any Democratic president would have much room to enact sweeping change.

Anyway, one of Obama's main promises was to "bring the country together" and work with the other side because, as he famously said in his 2004 convention speech, "There is not a liberal America and a conservative America — there is the United States of America." That hobbled him because every time he attempted to go mano-a-mano with the Republicans, they would throw it in his face and say, "Why are you being so divisive when you promised to bring us together?" (And yes, being the first black president brought with it a perceived necessity to always appear calm and steady, even when aggression might have been more effective.)

So I more or less agreed that the Green Lantern Theory described wishful thinking by people with good intentions. On the other hand, there was a corollary to the theory, which holds that the president's so-called bully pulpit is completely useless, that what he says is essentially meaningless in either moving public opinion or passing legislation. That's less convincing. After all, the president is the most famous politician in the country. He can command the media to follow his every word and he has millions of people who count among his trusted admirers. It never made any sense to me that this power couldn't be marshaled for political gain.

I wondered if Obama's oratorical gifts could have been used more effectively to argue the moral basis of policy, and he did that more often in the second term, largely because the administration had belatedly accepted that the Republicans would never negotiate in good faith about anything, so using the bully pulpit and the power of the executive branch was all they had. But it was pretty weak sauce when all was said and done. I ended up being persuaded that the bully pulpit actually was overrated.

But wait — what if it wasn't used to persuade anyone of anything, and was instead deployed as a blunt instrument to dominate the entire political conversation? That's how Donald Trump is using it. And as he is wont to say about everything, "Nobody's ever seen anything like it."

From the beginning of his presidency, the media has been focused almost exclusively on Donald Trump. Despite the fact that he has rarely held traditional press conferences, he generally has some kind of press availability on most days. Whether it's his meetings with foreign leaders, fawning visitors or members of his Cabinet where he fields a few shouted questions at the end, or the tedious "chopper talk" outside the White House on his way to a rally or Mar-a-Lago, Trump is always saying something to charge up the news cycle. And then there are the rallies which, even if they're no longer broadcast live, are always discussed on cable news and social media in great detail, along with his outrageous Twitter feed.

Donald Trump is ubiquitous. Everyone else in politics is a cipher compared to him. His dominance is overwhelming. And his pulpit is devoted to one thing and one thing only: himself.

Trump had planned to be running all over the country this spring, bragging about his single-handed brilliance in creating the greatest economy the world has ever known and restoring America to its halcyon days. But when the pandemic crisis hit he was, for the first time in over four years, deprived of his rallies — which are not only his emotional lifeblood but, in his mind, the key to his re-election. He couldn't even have "chopper talk" anymore since he was forced to stay in the White House and pretend to be working.

So on March 13, he decided to shove Vice President Mike Pence off the stage and take over the daily coronavirus task force press briefing. He's done one almost every day since then, including weekends, even when there is no news to report.

He starts off by reading haltingly from a prepared text, usually rattling off numbers that are often wrong. He flogs unproven drug treatments and second-guesses the medical experts. He'll let members of the task force say a few words, which must include effusive tributes to the president's magnificence, and then he takes over the microphone to answer questions.

This whole process often takes two hours or more, most of it dominated by Trump bragging and blaming and sparring with the press over his administration's response to the emergency. In his telling, his performance has been perfect. Reporters try to get explanations for his administration's erratic, often contradictory actions and Trump attacks them, sometimes personally, for asking. After nearly a full month of this, it's taken on the atmosphere of ritual humiliation.

These "briefings" are an act of rank egotism in the middle of an unprecedented public health crisis that is affecting every single person in America and killing our friends, neighbors and family members by the thousands. But the question is, "Is it effective?"

George W. Bush's senior strategist Karl Rove used to say, "Politics is TV with the sound turned off," which is to say it's all about the images. And Trump is seen every day behind the podium in the previously unused White House press briefing room, looking like presidents of the past, or outside in the Rose Garden, surrounded by experts, titans of industry, members of the military and administration officials. Everything he says is either ignorant, dishonest or outrageously provocative but he's there, on the screen, every day, making it clear that he is the man in charge, whether you like it or not.

There is some evidence that his daily briefings aren't gaining him any admirers but we'll have to see more polling before we can conclude anything. But we know that Trump's unorthodox use of the bully pulpit has made him the most omnipresent president in history. We'll find out in November how that worked for him.