U.S. wages economic war on Iran during pandemic, as mainstream media looks away 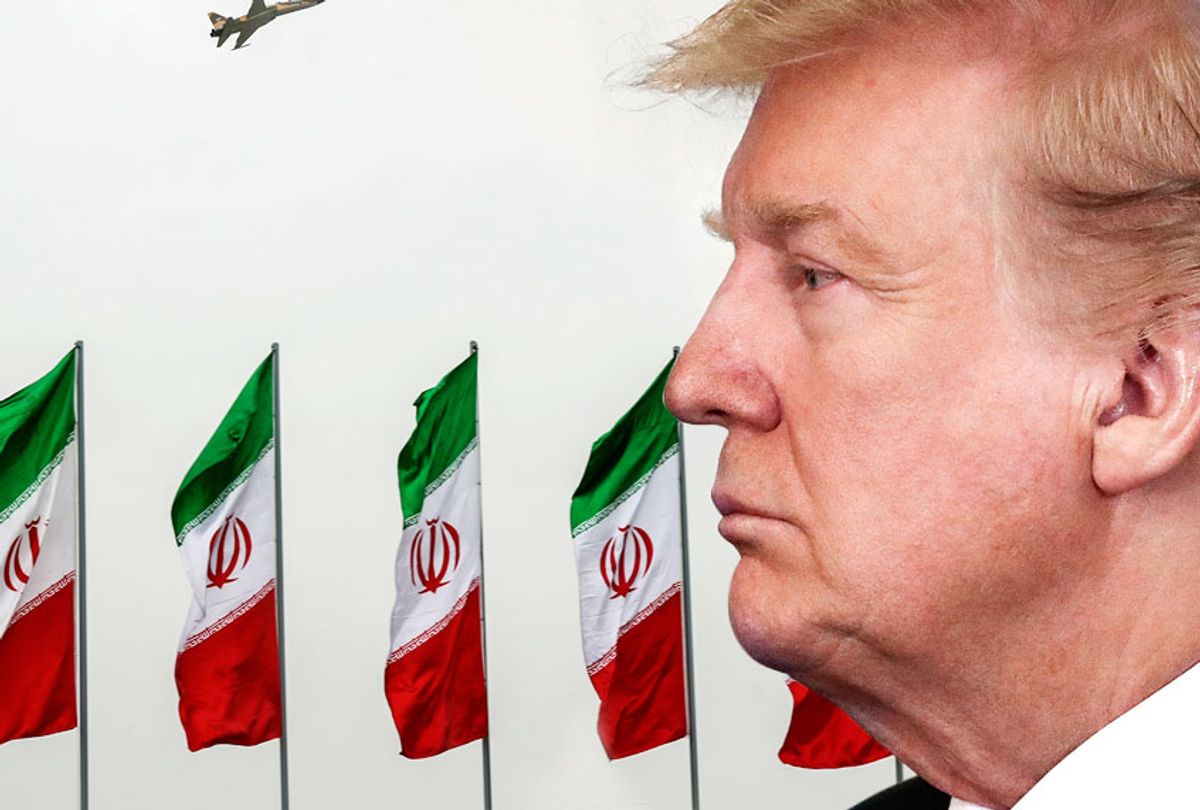 COVID-19 has hammered few countries as hard as it has hit Iran, which reports (as of April 8) 64,586 cases and 3,993 deaths. U.S. sanctions are a major reason that Iranians are getting infected with and dying from the coronavirus in such large numbers: U.S. economic warfare softened Iran up for the pandemic well before its outbreak.

Even before the pandemic hit, Human Rights Watch (10/29/19) was reporting that Trump administration sanctions were "causing serious hardships for ordinary Iranians and threatening their right to health."

Human Rights Watch documented last year (10/29/19) that sanctions had "drastically constrained the ability of [Iran] to finance humanitarian imports, including medicines, causing serious hardships for ordinary Iranians and threatening their right to health." U.S. sanctions are specifically designed to immiserate Iran, and driving the country into poverty has left it ill-equipped to deal with the coronavirus emergency:  Before the pandemic, sanctions had already cost Iran about $200 billion in revenue, primarily from decimated oil sales, and devalued the currency by half in the past two years (New York Times, 4/1/20).

As the scholar Eskandar Sadeghi-Boroujerdi (Jadaliyya, 12/3/19) noted in December, the sanctions constitute "the collective punishment of over 81 million Iranians through and by means of one of the most comprehensive and unrelenting sanctions regimes in modern history." They are

an effective economic blockade dragooning the energy sector, banking and finance (including its central bank), foreign investment and foreign exchange reserves and targeting basic foodstuffs, lifesaving medicines and much else besides. The war is near total and unremitting, and it has already taken many lives.

America's economic blitzkrieg extends to trying to dictate whether and how other countries engage with Iran. Last June, U.S. special representative for Iran Brian Hook told European companies that they "have a choice: Do business with the United States or do business with Iran" (Washington Post, 6/28/19). In January, days before Europeans warned Iran of nuclear deal violations and instituted a dispute resolution mechanism established in the 2015 nuclear deal, President Trump secretly threatened to impose 25% tariff on European autos if Europe start the dispute resolution process; the U.S. views this mechanism as a critical part of sanctioning Iran (Washington Post, 1/15/20).

Since COVID-19 has been tearing through Iran, the US state has not eased up its assault, "leaving Iran racing to curb the rapid, deadly spread of the new coronavirus, but these efforts are complicated by tight economic restrictions imposed by the United States" (Newsweek, 2/24/20). In fact, the U.S. has escalated its aggression during the pandemic by adding further sanctions, "keeping up its economic pressure campaign" (Reuters, 3/17/20) against a country where people are dying by the thousands — one every 10 minutes, according to the Iranian health ministry — in significant measure because of that pressure campaign.

Do sanctions made it harder to respond to a deadly pandemic? The New York Times (4/1/20) is agnostic — but it does know for sure that the "disaster [is] caused at least partly by Iran's own inept response."

The Trump administration claims that sanctions exempt the sale of medicine and medical devices, allowing Iran to access humanitarian aid, but as the New York Times (4/1/20) has acknowledged, "American secondary sanctions on financial institutions and companies that do business with Iran have made it nearly impossible for Iran to buy items like ventilators to treat coronavirus patients." Human Rights Watch (10/29/19) has noted that the sanctions scare companies and banks out of doing business with Iran, and that

as a result, Iranians' access to essential medicine and their right to health is being negatively impacted, and may well worsen if the situation remains unchanged, thereby threatening the health of millions of Iranians.

Now the U.S. is blocking Iran's request for a $5 billion IMF loan to fight coronavirus (Wall Street Journal, 4/7/20). Iranian "officials have a long history of diverting funds allocated for humanitarian goods into their own pockets and to their terrorist proxies," the Journal quoted an anonymous Trump administration official in the third paragraph, as though this were a trustworthy source.

Because the U.S. government is directly responsible for Iranian deaths, Washington's role should be a central concern to U.S. media. Yet that's not the case, according to my examination of stories published between the emergence of COVID-19 in late December and April 2. The Washington Post published 386 articles that address Iran and coronavirus during that period, and 55 contained the word "sanctions." In other words, 85% of the paper's Iran-related COVID-19 coverage neglected to note that the government based in the city with which the publication shares its name has played an important part in the disease's destruction in Iran.

The New York Times ran 439 stories that mentioned Iran and the coronavirus, and 40 of them, a mere 9%, referred to the sanctions. One of these was an editorial (3/25/20) calling for the blockade on Iran to be lifted, but this article accepted and amplified the premises that are used to try to justify the sanctions:

Ideally, [lifting the U.S. sanctions] could lead to a lowering of tensions, a reduction of attacks on American targets in Iraq by Iranian allies, and even, down the line, serious discussions on freezing Iran's nuclear escalation.

That's a lot of maybes, given a regime that has shown no inclination to back down before the United States. But if Iran refused American help or continued in its ways despite it, the sanctions would go back into place and the Islamist leaders would be hard put to convince their people that the United States was blocking humanitarian aid.

What the paper called "Iran's nuclear escalation" is a reference to Iran saying that it was no longer bound by a 2015 agreement that effectively ceased to exist when Trump scrapped it almost two years ago. Iran says that its nuclear program is purely for civilian purposes, and diplomats (AFP, 3/9/20) have reportedly said

that none of [Iran's] current stockpile is enriched beyond 4.5%, with much of it at a lower level than that. It would need to be enriched to roughly 90% for use in a bomb, not to mention all the other work required to produce a weapon.

The United States, meanwhile, has just under 6,200 nuclear warheads, an arsenal that the New York Times evidently does not regard as dangerous.

Note also that demands are only made of Iran: The Iraqi forces allied with Iran have to stop their attacks on American troops that are in the country against the wishes of Iraq's parliament, but the U.S. doesn't have to cease its attacks on them, let alone leave the country. Evidently, U.S. forces in Iraq against the country's democratic will should face no consequences for their violence, but Iran should be subject to economic throttling when its allies in the Iraqi military try to drive the U.S. out.

In uncritically parroting the extremely dubious rationale for sanctions, the Times adopts a peculiar method of arguing against them.

Of 343 stories in the Wall Street Journal that cover the coronavirus and Iran, 65 include the term "sanctions," just 19%. An editorial (3/25/20) in the paper said the sanctions should continue, using the same talking points as the Times about Iraq and about Iran's nuclear program, though the Journal goes even further and suggests that Iran is involved in "nuclear weapons development." (The International Atomic Energy Agency's March 3 Iran report says nothing to suggest that Iran is pursuing nuclear weapons.)

Furthermore, the Journal wrote that

American restrictions on Iranian economic activity include an exception for food and medicine imports. It's true that in the past banks were still hesitant to allow such transactions, but the US and Switzerland created a clearer channel for financiers to provide the country with help last month.

However, the Swiss payment system is "hardly a substitute for U.S. sanctions relief" (Newsweek, 2/24/20). It can only, as Human Rights Watch noted, "mitigate the harm United States sanctions pose to Iranians' right to health." It remains necessary, the group's deputy Middle East director said, "to monitor the negative impact of U.S. sanctions on human rights, and to take steps for a remedy."

Bloomberg's Eli Lake (3/22/20) also tried to conceal that he's sadistically calling for the U.S. to keep collectively punishing Iran—a war crime, as it happens — during a global pandemic by invoking the Swiss channel, writing that

the U.S. has tried to make it easier for the regime to purchase or trade for medicine and hospital equipment since the pandemic started. Last month, the U.S. and Swiss governments established a humanitarian aid channel to make it easier for banks and financial institutions to underwrite such transactions with Iran.

Tyler Cullis (Responsible Statecraft, 2/20/20) argues that the "net effect" of the so-called "humanitarian channel" may be to "cause further distress to Iran's access to humanitarian items."

The so-called "humanitarian mechanism" — which was borne out of a desire to placate public concern over the effects of U.S. sanctions on the Iranian people — sought to institute a system whereby foreign banks could receive written assurance from the U.S. government that they would not be sanctioned for facilitating trade in humanitarian goods on the condition that they conduct enhanced due diligence with respect to Iranian counterparties and submit routine reports to the U.S. government regarding any transactions conducted….

The best way to comprehensively remedy the inordinate harm the Iran sanctions do, it seems, would be to lift the sanctions, but few in the corporate media are making this rather obvious point.