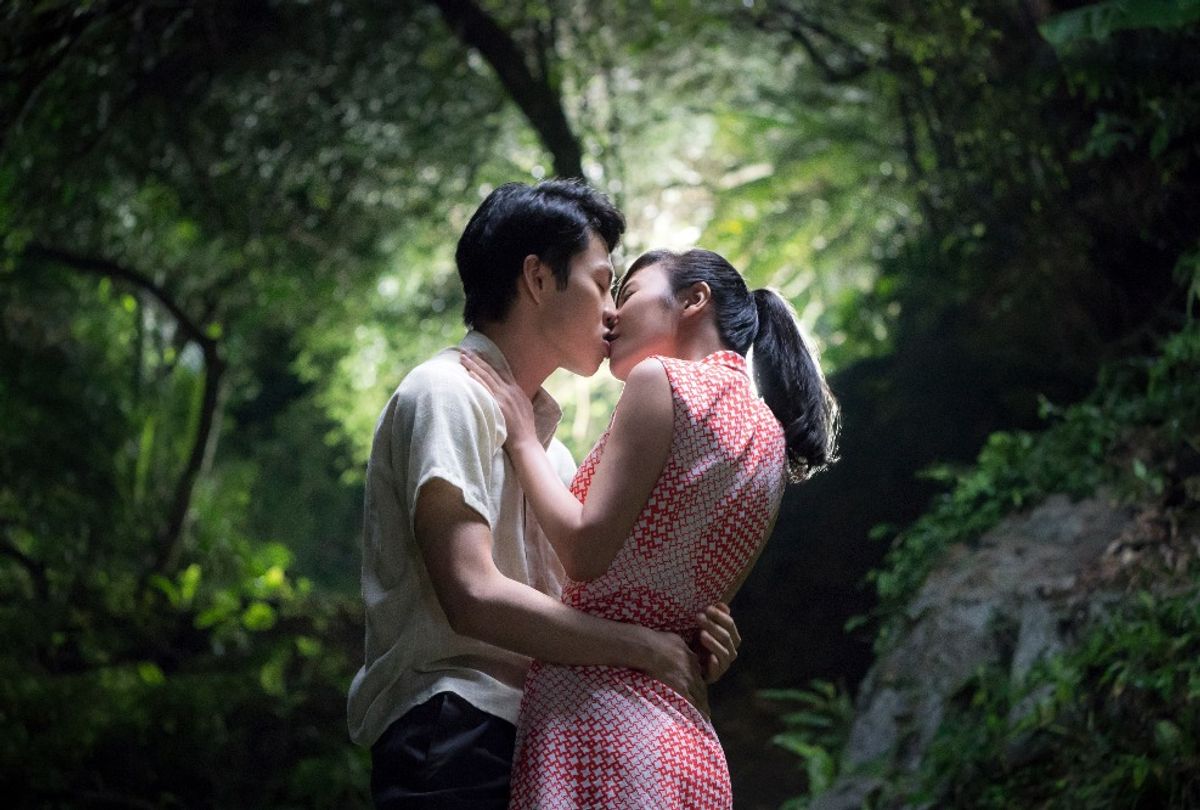 Alan Yang ("Master of None," "Forever") makes his feature directorial debut with "Tigertail,"  an immigration story that feels both classic and new. It tells a movingly fictionalized tale of his father's (played by Tzi Ma) emigration from Taiwan to the United States, in search of better opportunities, and in the hopes of allowing his mother to quit her grueling factory job. Departure is never easy. He leaves behind not only his country, but also the love of his life.

Though its themes of nostalgia and sacrifice are very familiar, "Tigertail" never yields to empty, feel-good platitudes or stereotypes. Instead, it deeply humanizes what Yang describes as the "stoic Asian dad," archetype, lending much-needed dimensionality through contrasting flashbacks of the charismatic, younger Ping-Jui in Taiwan — a time filled with dancing and mischief, despite intense financial hardship — and his later years, as an older man toughened by hardship and estranged from his daughter grown daughter Angela (Christine Ko). The film is lushly beautiful and quietly devastating.

Thank you for finding time to speak with me, despite the ongoing pandemic. How have you been holding up?

My home is now a studio; they sent me a ring light, a microphone, headphones. It's a real professional operation. I should segue from directing to hosting junkets in my home.

You said they sent you a ring light? You're basically an Instagram influencer now.

Well, not to get too far off topic – I really enjoyed your film "Tigertail," and I'm excited to talk to you about it. I know it's based off of your father's immigration story, but I was wondering how closely you stuck to his life, and how much of the film was of your own creation?

I asked a fair number of questions about my father's old life, and got anecdotes and got what I felt was the emotional kernel and emotional truth of his story. But I left a lot of room for imagination because I didn't want it to be an exact retelling; it's not a documentary, it's not a biography. It's really about the idea that all of our parents have these amazing stories, and we're blind to them for most of our lives. And finally, when you become a certain age, you see your parents as human beings and you start envisioning them as younger people.

I think the reaction I've already gotten in the hours it's been out is people saying, "Was every stoic Asian dad a charismatic young guy, who's dancing around when he was younger?" It does happen! It's really something that we don't think about. We see stoic Asian dads in hundreds of movies, but I don't think we've explored these other sides of them, what they've gone through, what made them that way. My dad was the entry point, and I hope there's a universality and commonality that others find.

How involved were your parents in the making of the film?

I let them know, early on, that I was making the movie and that I'd be asking them some questions. I didn't grill them like a journalist, I didn't have a recorder — none of that stuff. I would send them texts every now and then, talk to them on the phone. And, of course, my dad and I took a trip to Taiwan that was really valuable in making the movie. It was a gradual process.

Later, my dad actually got a little more involved, because he's retired and so he had a little more time than my mom. So I would send him translations to be done, like if we were going to use a song, I'd ask, "What are they saying in this song?" Any time I needed written-out Mandarin on screen, like in the opening credits, I had him fact-check it because I can't read Mandarin. And finally he did the voiceover in the beginning and the end of the movie. And so he became part of the crew, in some ways, and that was really meaningful for me. It really brought us closer together.

Speaking of music, I'm curious about whether Yao Su Rong [the singer of the distinct song playing as Ping-Jui heads to the airport with his new wife, to leave Taiwan] is a favorite of his?

That was my own invention. I researched what was popular in the '70s in Taiwan, and I picked this song because I loved it, the first record, that Yao Su Rong song. I think that song is a mix of East and West, where it's a rock band backing this female singer who's singing in Mandarin. It was unlike anything I'd ever heard before, and it really encapsulated the vibrancy and passion of this young guy.

My mom loves this singer. I thought that song was a really great choice.

I had no idea! My parents just watched it, and Christine Ko's parents just watched it — she's Taiwanese as well — and they were going crazy. They were saying it felt like they were in the movie. Her mom has a friend who owns a chain of IMAX theaters, so they watched the film in an IMAX theater, and she said she was surrounded by these 60-year-old Asian men, and they were all crying. That, to me, I don't care what others think — that's their story.

Were there any particular Asian filmmakers that inspired you while you made "Tigertail"? Did they inspire particular filmmaking techniques you used?

Of course, I watched as much Taiwanese cinema as I could before we started making it. The films of Edward Yang and Hou Hsiao-hsien, in particular. And of course there's Wong Kar-wai as an inspiration visually, in the cinematography and costume design we used in this film. But these are masterpieces I'm talking about, and I would hate to invite comparison.

We used multiple timelines to show Ping-Jui was never really present, at a certain point, because of the decisions he regretted making. He was always torn. And that's why the scenes shot in the past were so much more vivid and lush and traditionally beautiful. That's his memory, and his fantasy of the past. It maybe wasn't even exactly like that, it was probably some version of that, and he's glorified it in his mind. I think there's a version of that in a lot of immigrant stories, where they have a memory of the past that never fully goes away, no matter how much you love your new country. That informed our technique in shooting those scenes.

I was also inspired by films that, frankly, take their time. I think we're conditioned, as American film and TV audiences, to go faster, faster, faster, and when I watch TV shows and movies now, it's hard for me to keep up. It almost doesn't feel how reality feels, anymore. I've been trying to learn from some of the greatest films ever made, like [Ingmar] Bergman or [Stanley] Kubrick, and these directors take their time. The pacing is not going to be for everyone. But I think there's a couple different ways a film can be "boring." One, if it's too slow-paced, but two, if it's doing something you've seen a million times. I wanted to apply a version of those techniques to modern stories and concerns, and one of those concerns is immigration, out of the Asian diaspora into America. I just haven't seen that.

You can watch Western cinema, you can watch Asian cinema, I just haven't seen those techniques applied to this kind of story very often, if at all.

It's been exciting to see a wider range of films made by and starring Asian Americans on platforms like Netflix. The lack of such films really puts pressure on each individual one to speak on behalf of all Asian Americans, which is obviously impossible. Do you feel like there's more of a critical mass in a way that puts less pressure on you as a filmmaker?

I'm unbelievably happy with the progress that Asian American filmmakers have made. Just having more Asian faces on screen, whether they be Asian American or Asian films like "Parasite." And obviously there's a distinction between the two, films made in Asia by Asian people, versus American films. But I think we're still a little ways away. When there's only one, or when there's only three, or when there's only six, you're still at that point. Can you imagine if years ago, you talked to a director and asked, "Do you think this is every white person's story?" No, it's a specific family, or whomever it is.

It wasn't a political priority going into the movie — and obviously who could have foreseen the insane climate we're in — but certainly I have felt for a long time that Asian American characters on screen have been so flattened and removed of their personality. Part of that is being sidelined, and not being the main character. But part of that is, frankly, stereotypes, and the stereotype of someone being robotic or foreign or alien. It sounds very basic, but I think it's real. More depictions of Asian Americans as three-dimensional human beings, as people with rich emotional lives, can only help.

I think progress generally moves forward, and I think we're on our way. It's very encouraging. Honestly, I don't think this movie could have been made five years ago, or even ten years ago. I think there are a lot of filmmakers out there who are ready to make more films, and tell totally different stories. This story has to do with the previous generation, and is concerned with identity and heritage, and grappling with the struggle between generations. But I'm looking forward to stories that are just set in the present, or in the past, or in the future. Maybe even a sci-fi story. We don't have any of that. The canvas is wide open for us.

"Tigertail" is currently streaming on Netflix.