While the public experiences a health calamity, the homeschooling movement sees a big opportunity 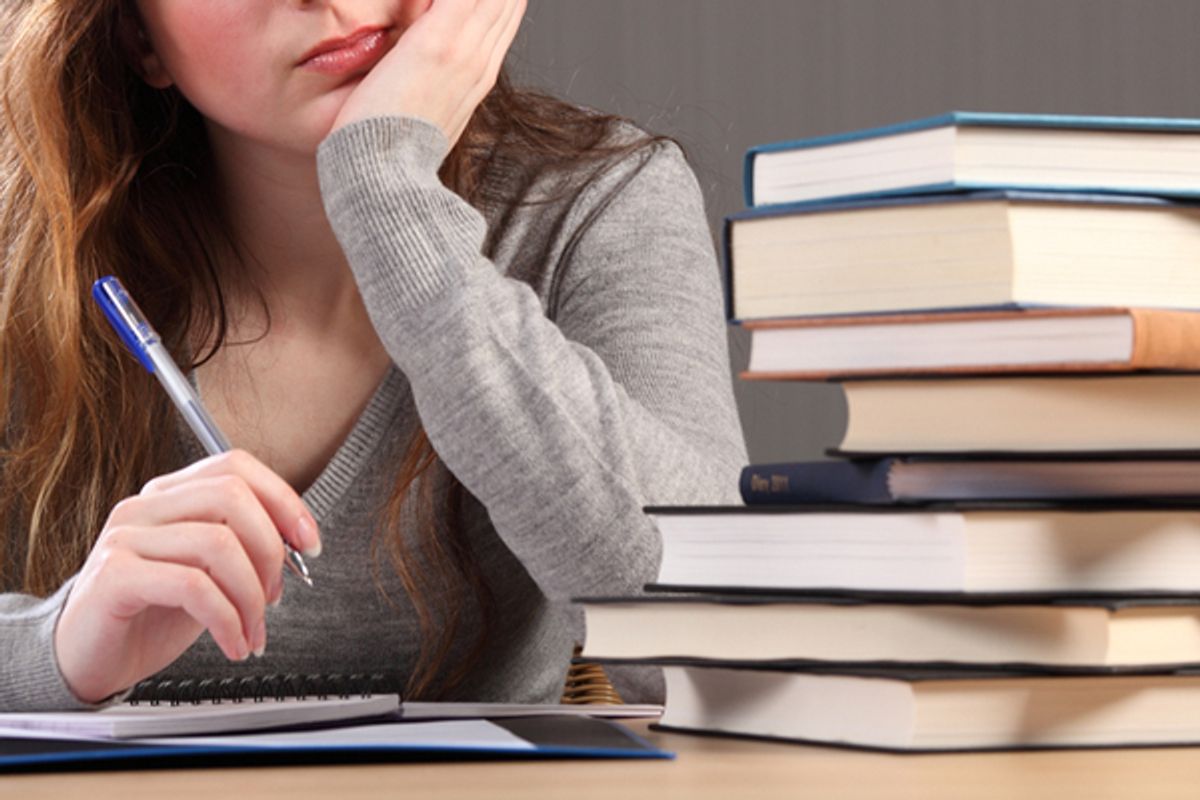 In the early days of the spread of the coronavirus in the U.S., when the number of known cases was barely cresting 1,000, advocates for homeschooling were greeting news of the outbreak as an opportunity to promote their cause.

"While the virus has caused illness and hardship for many, keeping children out of school is not a global calamity," wrote libertarian think tank operative Kerry McDonald in Forbes on March 11, two days before President Trump declared coronavirus a national emergency.

McDonald wasn't the only cheerleader for homeschooling in the face of a pandemic. "Learning can happen anywhere," Secretary of Education Betsy DeVos enthused on Twitter.

School closings were turning parents into "the nation's teachers," according to the Washington Times, a consistent advocate for public school privatization. The article, by Christopher Vondracek, told readers not to think about home-schooling as being "associated with religious reactions to the secularization of public education and the banning of prayer in public schools during the 1960s." Homeschooling, he contended, "looks nothing like that of yesteryear," because now "innovative lessons abound" and new technologies — including video streaming, apps, and social media — have made homeschooling a better option for parents seeking "individualized instruction and safer environments" for their children.

Vondracek pointed readers to the National Home Education Research Institute (NHERI), which "lists a variety of reasons for home-schooling." What Vondracek failed to mention is that NHERI is not an educational organization but is instead part of a network organized by the Home School Legal Defense Association (HSLDA), an intensely powerful homeschool advocacy and lobbying group.

HSLDA founded Patrick Henry College, which, as the New York Times noted, is known as "the first college primarily for evangelical Christian home-schoolers." In 2017, HSLDA received an audience with DeVos "to discuss the success of homeschooling and to determine what homeschoolers need from the federal government for continued autonomy and success," according to NE News Now, the media outlet of the American Family Association, a Christian advocacy.

Another source Vondracek quoted is the same Kerry McDonald who said, "Homeschooling can be a useful lens in helping parents to realize that children can learn effectively without school."

The 74, a media outlet funded by billionaires to push public school privatization, ran stories that framed homeschooling as mere how-to challenges for parents and gave editorial space to homeschool entrepreneurs. Even more legitimate sources, such as Hechinger Report editor Liz Willen, saw in the wake of the coronavirus "a new era of homeschooling."

Yet experts warn that any growing popularity of homeschooling as a result of the pandemic will likely worsen education for students and pose serious problems to the economy and the nation's social well-being.

First, homeschooling is simply not feasible for "most parents," T. Jameson Brewer told me. Brewer is an assistant professor of social foundations of education at the University of North Georgia and a former high school and middle school social studies teacher. A 2017 study he co-authored with Indiana University professor Christopher Lubienski, "Homeschooling in the United States: Examining the Rationales for Individualizing Education," found that many of the benefits of homeschooling that its advocates trumpet are generally invalid.

What undermines arguments for homeschooling most is the fact that homeschooling is only viable for an exclusive percentage of families. "Homeschooling requires a significantly larger financial commitment namely in the way of a foregone salary," Brewer and Lubienski found in their study. "The parent who homeschools during the day is not able to work outside of the home and therefore the decision to homeschool is a sacrifice of a potential source of income."

There are other costs, including transportation (for trips to museums and other outings), meals, utilities and extra-curricular activities that are normally provided by a traditional public school.

In other words, homeschooling is expensive.

In an email, Brewer included an excerpt from a forthcoming book in which he calculated "the typical homeschooling family makes nearly 50 percent more than the typical household in the United States"—a remarkable statistic given that homeschool households normally sacrifice one income. Taking into account the absence of a second parental income, the sole income supporting a homeschool household is three times the national median, according to Brewer.

"The simple costs associated with homeschooling are not available to most families," Brewer told me in an interview. But the income required to support homeschooling is the chief factor that produces any academic advantages attributed to homeschooling.

"Students who are homeschooled would, in all likelihood, achieve at the same academic levels while attending a public school as they do within the homeschooling environment," Brewer and Lubienski contended in their study.

If the income barrier homeschooling imposes can somehow be overcome, another barrier is the lack of teaching expertise parents have.

Homeschool advocates often claim parents are the most natural teachers of children. Their argument is because parents teach their children their earliest lessons—how to walk, tie shoes, ride a bike, even how to read—they are perfectly capable of teaching children more sophisticated knowledge and skills.

Brewer disagrees. "I am a parent and I 'assisted' my children with many of these things … I also help my children put on bandages when they get a cut on their knee from falling down. But it would be negligent of me to think, suggest or practice any type of actual medicine."

Brewer pointed out that teachers, in order to receive certification, have to develop expertise in fields beyond subject-area knowledge, such as early childhood development, curriculum development and instructional methodologies. "What you don't know [about teaching] matters," he said.

He also expressed concerns that the disregard for teaching expertise (which characterizes much of the homeschool movement) "carries over" into other forms of "anti-intellectualism" that have become "endemic" in society, such as anti-vaccinations, anti-evolution and anti-sex education.

While Brewer acknowledged there are homeschool parents of all political persuasions, he finds a strong tendency among these parents to want to isolate their children from a broad spectrum of ideas, whether that urge is driven by a conservative persuasion to resist exposing their children to evolution or world languages or a liberal resistance to the regimentation that often characterizes public schools.

"Public schools are, by definition, artifacts of a societal obligation to fully socialize all children," Brewer explained, and that entails engaging them in the full range of viewpoints and experiences that characterize a pluralistic, democratic society.

Brewer is concerned new technologies may actually make the isolation created in a homeschool environment worse, especially given the algorithmic nature of tech that tends to drive people to information that reinforces their prior viewings.

"If parents are choosing to homeschool for, say, religious or political reasons, the internet and other technologies can lead to a greater influence of echo chambers of information," he said.

Brewer's objections to homeschooling are "not an endorsement of the current status in public schools." He acknowledged "there are serious issues and concerns," such as inequities in the system and problems with overcrowding and unfair practices. But he also expressed concern that an increasing population of parents who are the most capable of helping to address those concerns—due to their relative wealth, education attainment, and other demographic advantages—are the ones who often opt for homeschooling.

None of this is to suggest that parents shouldn't do whatever they can to keep their children's education development growing in the face of the COVID-19 calamity. And of course, school districts and educators are to be commended for employing remote learning strategies, including moving instruction online, so that parents can support their children's learning while they are locked down at home.

But homeschool advocates, and other proponents of public school privatization, who cheerlead for their cause while tragedy unfolds resemble vulture capitalists that have taken advantage of other catastrophes.

"Sometimes disasters lead to vast institutional change," McDonald opined, "such as when Hurricane Katrina decimated New Orleans and prompted the unprecedented creation of a nearly all-charter school system. These systemic shocks can trigger a fresh look at norms and power structures and cause some to question if there is another, better way."

Whether or not you agree that schooling in post-Katrina New Orleans is a "better way" to educate children—and there are serious doubts about that—the recovery of public education in the Big Easy took massive investments, something libertarians like McDonald are highly unlikely to support when this pandemic ends.

Further, the current economic crisis the nation faces is unlikely to be helped if, after the recovery gets underway, there is a massive movement of unemployed parents deciding to stay that way in order to homeschool their children.

Instead, the massive shuttering of the nation's public schools should be understood for what it is—a fiasco to be addressed and overcome, as soon as it is safely and reasonably possible, and an opportunity to renew and reinvigorate the nation's commitment to public education.