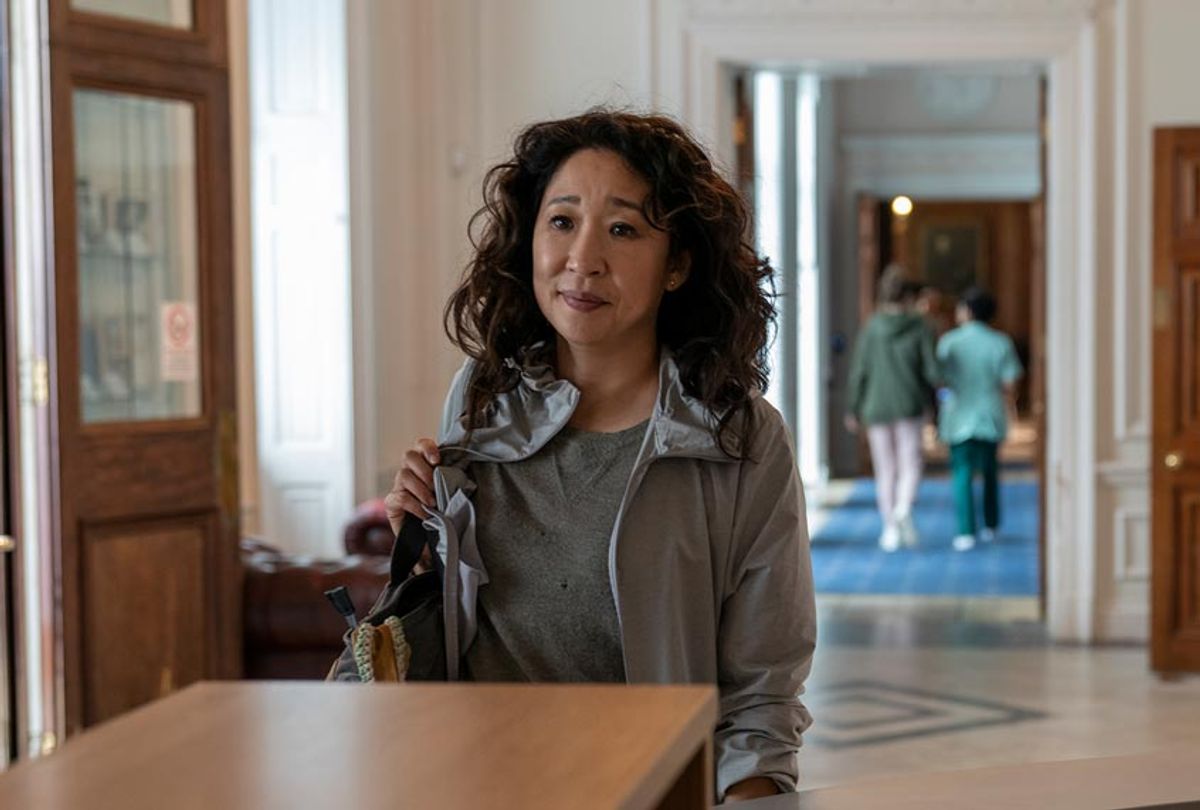 Three seasons in and the title "Killing Eve," which places the verb in the active voice, is still in play because former MI6 profiler Eve Polastri (Sandra Oh) is not yet dead in the BBC America thriller. This, despite the best efforts of international assassin Villanelle (Jodie Comer) to kill, er, Eve, confirming what the trailer and promotional material for the new season have been telling us all along.

With Eve not quite whole and hearty, the hit espionage drama created by Phoebe Waller-Bridge returns, but following what now has become a "Killing Eve" tradition, is now under a new leader. Last season brought on new head writer Emerald Fennell, but she's passed the mantle to Suzanne Heathcote, an acclaimed British playwright who served as Executive Story Editor for AMC's "Fear the Walking Dead" and as a writer/producer for Apple TV's "See."

The show will pick up a little time after the events of last year's devastating cliffhanger finale, in which Villanelle shoots Eve in the back among the ruins of Rome, leaving her for dead (mirroring the finale of the first season when Eve stabbed Villanelle in the stomach). This comes after the two had worked closely together for the entire season investigating the life of tech billionaire-turned-serial killer, Aaron Peel (Henry Lloyd-Hughes).

Now, it appears that Villanelle has landed on her fashionable feet, but naturally can't forget her "ex" or vicitm, as it were. As for Eve herself, she's survived, but what sort of life she's living is the question; at least it appears that her former co-worker Kenny (Sean Delaney) has forgiven her for their falling-out and is checking up on her. Meanwhile, Eve's former boss Carolyn (Fiona Shaw) is dealing with bureacracy to answer for the way she botched the operation last season, and Villanelle's former handler Konstantin (Kim Bodnia) and Eve's mustachioed husband Niko (Owen McDonnell) are both back. New to the cast this season are Harriet Walter as Dasha, a ruthless assassin from Villanelle's past.

Heathcote spoke with Salon about how Eve will emotionally grapple with the devastating events of last season, getting beneath the surface of Villanelle's carefully maintained master-assassin persona, and what advice she has for the show's next lead writer.

What were some of the benefits — and also some of the challenges — of coming into a project that was already something of a cultural phenomenon?

You're absolutely right, it comes as both. The benefits are, particularly in Phoebe and Emerald, you have two people who have been through this very unique job. And, you know, I was very lucky that they were very supportive. And Phoebe and I spoke a lot through the season. And so you really are able to have a support network in that.

It's a show that I love, so it was very exciting to me to dive into a world that I just adored so much and all the things that come with that. I love the characters; you know, I'm a playwright originally, and all my plays have very strong, complex female leads at the center of them. So, writing female characters is kind of my jam.

And the challenges — they come from the positives. You're trying to find new ways to surprise people and keep the world new, while also honoring what the characters have been through.You know, it doesn't always mean you can start with everyone on a high. You have to sort of take what happened to them and really try to find ways to feel the story going forward with that.

You've had a really tremendous career as a playwright. Could you talk a little bit about how writing for theatre differs from writing for television? And how does it inform it?

My playwriting background — I'm very grateful for it, actually. For me as a playwright, and I think most playwrights would probably say this, you really do often start with character. So, as opposed to the plot being what drives the character, it tends to be the character that you come up with first and then it's about what you do with those characters.

Again, what I love about the show is that you have these very flawed, complex women at the center of it. So just delving into them and being able to go deeper into them, emotionally, was what was interesting to me and somewhere I definitely wanted to go this season.

Character insights, as a playwright, is something that I'm always interested in in my plays.

The end of Season 2 left Eve in a pool of blood. It's a really, really dramatic image. Can you tease how she,  and some of her relationships, move forward in Season 3?

I felt that it was very important this season that we really looked at the consequences of actions that had happened prior and for Eve. She has to deal, not just with what's happened to her, but the actions that she's taken herself: the violence at her own hand, and the darkness within her that she had really seen.

I think initially, she feels that she needs to almost protect the world against her. It's about removing herself from the world, and she's in a very specific survival mode. And Sandra [Oh] and I spoke about it a lot, and it's not that she feels sorry for herself or anything like that. It's stronger than that. She just feels, I believe, that she's a dangerous person and that the world is better off with her separated from it.

Then something well beyond her control happens to reel her back in.

Was there a particular character arc, other than Eve's, that you really connected to this season?

Villanelle. In the writers room, we talked a lot about going deeper with that character and getting a glimpse of what is beneath the layers of who she is and making her tick. You know, still maintaining the mystery of her, but at the same time, just seeing more of her.

And then I love Carolyn. She is such a joy to write.

So Season 4 of "Killing Eve" is already in the works. What would you tell the next writer who comes after you? Any words of wisdom?

Ah! Laura Neal ("Sex Education") was actually one of the writers on Season 3, so we know each other; in fact, she was the very last person I saw socially before the lockdown. We went and had a drink, so we chat a lot all the time, anyway. She was in the thick of it this season herself, so she's seen a lot.

But I would just say to anyone in this job that it's about making it your own while remaining true to the characters, and just having as much fun as you can. As trite as that sounds, and I know that sounds trite, you can sometimes forget it. It's hard work. Like it's really, really hard. You just have to remind yourself, what do I want to see? What do I want to write? What do I want to feel?

So it's just about having as much fun as you can while in the midst of the madness.