Bernie Sanders endorses Joe Biden for president: "We need you in the White House"

Alexandria Ocasio-Cortez says she will also support Biden, while cautioning that "he didn't win because of policy" 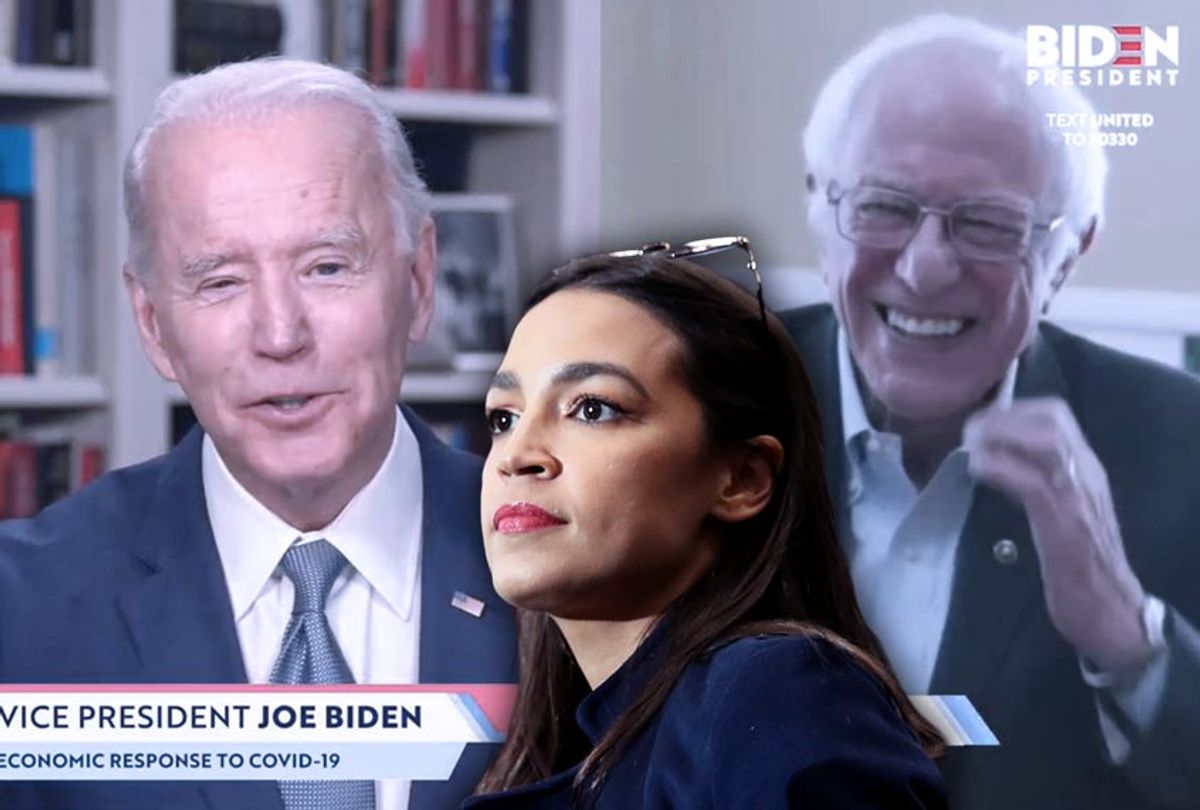 "We need you in the White House. I will do all that I can to see that that happens, Joe," Sanders told the former vice president during a livestream broadcast on Biden's website.

Biden replied, "I think that your endorsement means a great deal. It means a great deal to me. I think people are going to be surprised that we are apart on some issues, but we're awfully close on a whole bunch of others. I'm going to need you — not just to win the campaign, but to govern."

Earlier that day, Rep. Alexandria Ocasio-Cortez, D-N.Y., told The New York Times that the Biden campaign had not yet reached out to her, even though she was one of Sanders' most prominent backers.

"The whole process of coming together should be uncomfortable for everyone involved — that's how you know it's working," Ocasio-Cortez said. "And if Biden is only doing things he's comfortable with, then it's not enough."

After pointing out that Biden won the nomination while rejecting some of the progressive policies championed by Sanders, The Times asked Ocasio-Cortez whether she thought it was realistic that he would "get uncomfortable" on those issues.

Ocasio-Cortez insisted, however, that she would support Biden's campaign.

"I've always said that I will support the Democratic nominee," Ocasio-Cortez told The Times. "But unity is a process, and figuring out what that looks like is part of this whole conversation that I think Bernie and Warren and other folks are a part of, as well."

When asked if she would rally with Biden, Ocasio-Cortez said that she has "never" talked to the vice president "that I know of."

This is not the first time that Ocasio-Cortez has expressed reservations about Biden. She told Vogue in June that she did not view Biden as a "pragmatic choice" and added that "if you pick the perfect candidate like Joe Biden to win that guy in the diner, the cost will make you lose, because you will depress turnout, as well. And that's exactly what happened to 2016. We picked the logically fitting candidate, but that candidate did not inspire the turnout that we needed."

Ocasio-Cortez expressed a similar view during an interview with the Yahoo News podcast Skullduggery last April. When asked about Biden's candidacy, she said it did not "particularly animate me right now."

She added that "I can understand why people would be excited by that — this idea that we can go back to the good old days with Obama, with Obama's vice president. There's an emotional element to that, but I don't want to go back. I want to go forward."

Ocasio-Cortez ultimately endorsed Sanders, explaining in the October speech announcing her decision that "standing up to corporate power, and established interests is no joke. It's not just about standing up and saying these things, but behind closed doors, your arm is twisted, the vise pressure of political pressure gets put on you, every trick in the book, psychological, and otherwise is to get us to abandon the working class."