Voter disenfranchisement and COVID-19 are connected — here's why 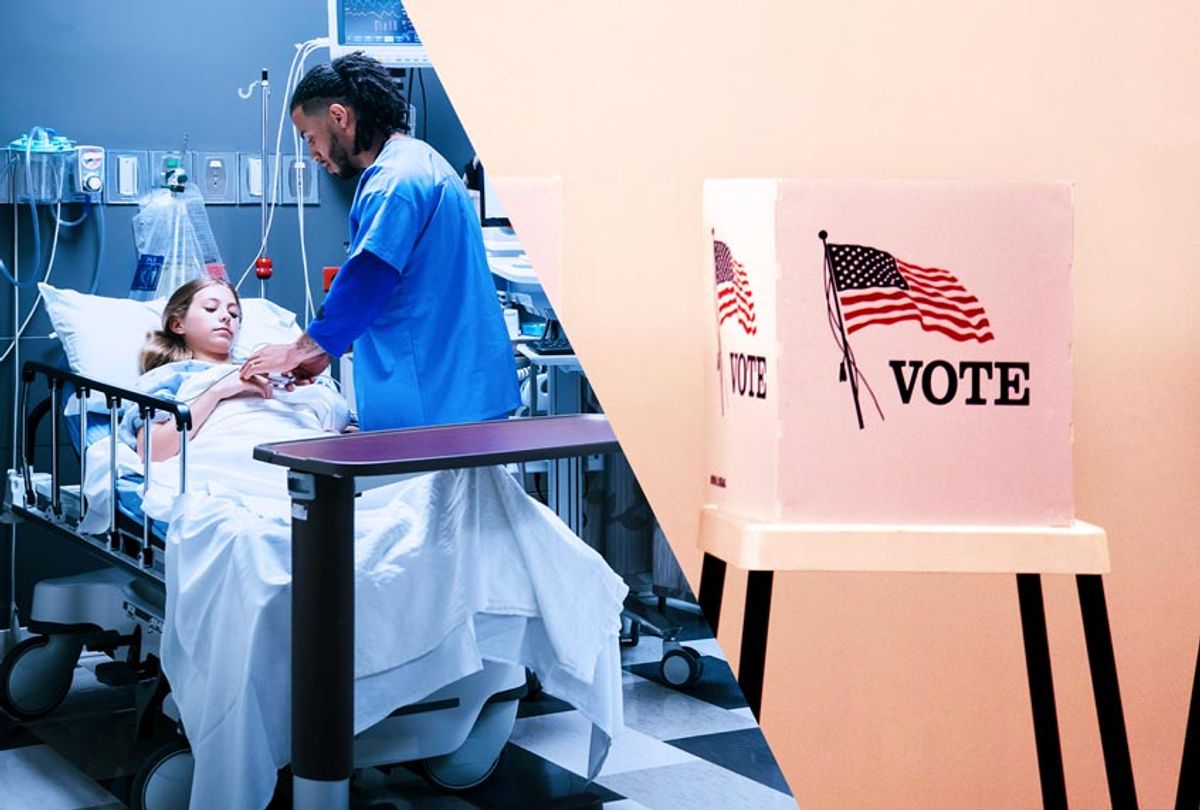 The primary elections happening simultaneously to the coronavirus pandemic have cast a light on how the government's inactions disproportionately impact the health of the most vulnerable — particularly communities of color. Recent studies have found that blacks are dying of coronavirus at far higher rates. In Chicago alone, Blacks made up 70 percent of COVID-19 deaths, but only make up 30 percent of the population of the city.

At the same time, the ongoing Democratic presidential primary has revealed itself as a sham. This was made evident during last week's primaries held in Wisconsin, which were marred by a lack of voting machines, staffing issues, and a pandemic to suppress real-life voter turnout. Many see the voting debacle as deliberate. As Milwaukee's Health Commissioner, Dr. Jeanette Kowalik, explains "They did this to enforce voter disenfranchisement. They did it because they wanted to force black people, poor people, Democratic strongholds to risk their lives." Milwaukee — where Blacks make up 38 percent of the population, yet constitute over half of the coronavirus cases and over 80 percent of the COVID-related deaths — saw the number of polling places dwindle from 180 to five for a city of nearly 600,000.

Impediments to voting, such as fewer polling places and long wait times, make it especially harder for already socially disadvantaged groups to participate in the political process and to support policies that promote their health and overall wellbeing. These processes are undergirded by structural racism—a historical, enduring hierarchy, embedded across society's institutions, norms, and values. Structural racism maintains the powerful and privileged position of whites through the erosion of rights, opportunities, and resources of all other racial groups. Structural racism can be characterized as "inaction in the face of need," and sustains social and health inequities.

Given the worsening pandemic and looming elections, it is critical to highlight how, within the context of structural racism, the COVID-19 pandemic has exacerbated two mutually reinforcing crises: political disenfranchisement and racial health inequities.

From voter suppression to public health

Voter suppression efforts are quintessentially a form of structural racism — as voter suppression is embedded across various institutions, stratifies power and resources, and is supported by ideologies of White supremacy. The ultimate goal of voter suppression is generally to maintain power for an elite group — say, wealthier white men — while repressing the power of people of color.

Historically, the right to vote has been stratified by race, with equal voting rights mandated by law as late as the passing of the Civil Rights Act in 1964. Yet, voter suppression persists and can take many forms – voter identification laws, the closing of polling places in primarily non-white neighborhoods, reductions to early voting, gerrymandering — all of which make it especially difficult for voters of color to access the ballot while not hampering voting for whites to the same degree. Disproportionately suppressing voters of color has been a racist tactic that has continued even after the passing of the Civil Rights Act.

Further, voting disparities have been exacerbated by the 2013 Supreme Court decision of Shelby County vs. Holder. That decision weakened the Voting Rights Act, specifically by reversing the preclearance requirement for voting policy changes for states with a history of suppression. This court decision led to an increase in poll closures, voter identification laws, and cuts to early voting. This helped further concentrate power in the hands of white voters whose political leanings were generally conservative or centrist.

Power and health are interconnected — and so are health and voter suppression. Unhealthy citizens are less likely to vote; illness and disability can make it harder to get to the polls. In turn, voter suppression should be considered a determinant of health because it shapes who is elected and the policies they support — from housing and education regulations, to unemployment and social safety net policies, to environment and zoning laws. These laws then impact people's exposure to risks, their neighborhood and living conditions, and the resources they have to cope with these risks — all of which have consequences for health. Without a political voice, voters of color cannot advocate for policies to achieve health equity. With COVID-19, we see both how voter suppression could have resulted in worse health and how illness, or the fear of it, may suppress the vote.

Currently, voter suppression may have contributed to the policies that make some people more vulnerable than others. For instance, thirteen states that passed suppressive voting laws also decided against expanding Medicaid benefits under the Affordable Care Act, suggesting that voter suppression may reinforce the passing of adverse health policies. Those without health insurance tend to identify as non-white and may be more vulnerable to COVID-19, as they may work in jobs that increase their risk of exposure, have trouble accessing testing and treatment, be more financially impacted by the pandemic, and not have access to paid sick-leave. Social safety net policies that would have benefited many low-wage workers or those who are unemployed could have been implemented had representatives who supported those policies been elected.

Conflicting health and get out the vote messages

Throughout the course of this presidential primary, American voters have been bombarded with conflicting information about COVID-19. The president has repeatedly misled the public on the severity, origins of, and proper ways to contain the novel coronavirus. Meanwhile, health experts gave dire warnings and issued guidelines to prevent disease transmission and identify symptoms. Simultaneously, during mid-March primary elections, political campaigns were reassuring the public that it was safe to vote in person, misrepresenting public health messaging from the Centers for Disease Control (CDC) and the National Institutes of Health — while continuing campaign activities like canvassing and rallies that could potentially facilitate the spread of the novel coronavirus.

Notably, prior to the multi-state March 17th  primary for Arizona, Illinois, Ohio, and Florida, the CDC advised the cancellation of all public gatherings of more than 50 people, in order to slow the spread of the virus. As a response to these concerns, and citing apprehensions from poll workers and voters, Ohio delayed their primary. Despite mounting calls to delay other primaries, Biden and his campaign staff falsely assured the public that the CDC had claimed it was safe to vote and encouraged people who felt "healthy" to vote in person. This not only contradicted messages from health experts, but also suggested that people who felt healthy were incapable of transmitting the disease, a claim that had been proven false.

This put the onus on the public to decipher competing health messages from the CDC, democratic political candidates, and the president. As a result, Illinois suffered lower voter turnout, the closure of polling places in large Latinx communities, and positive coronavirus test results for poll workers. In effect, voters were asked to choose between their right to health and their right to vote.

This choice repeated itself last week in the Wisconsin primary, which was not delayed despite the governor issuing an executive order for residents to stay home. The confusing situation created a contradiction in public health messaging.

The ease with which the primary morphed into an illegitimate sham could have frightening repercussions for the upcoming 2020 presidential election — in particular, the potential for mass voter suppression, in which the Republican party repeat's their strategy in Ohio and bolsters their claims by highlighting Biden's prior claims about the safety of voting in a pandemic.

Public health as a way forward

In light of the current crises, we propose that public health can provide guidance not only on the biomedical factors of the virus, but can also provide clarity about the unequal social and economic consequences of the disease. A health equity approach will pave the path forward to achieve redistribution of the current imbalances of power and resources. Dr. Camara Jones, former President of the American Public Health Association, outlines the principles of health equity (and describes how each should be addressed in response to COVID-19), as the following, "(1) valuing all individuals and populations equally—that is, there are no invisible, undervalued, or disposable people; (2) recognizing and rectifying historical injustices; and (3) providing resources according to need—not equally, but according to need."

Throughout history our institutions and policies have symbiotically ensured that certain groups are denied access to power and resources that improve health. Now, we are seeing that unfold. Consequently, the lives of members of the most vulnerable groups in this country, particularly people of color and those with limited economic resources, will be lost. In fact, COVID-19 is more lethal for communities of color across the country, than for white Americans. These unjust differences in fatalities are driven by the very same unequal systems (political, economic and social) that, throughout history, have excluded, undermined and/or dismissed communities of color.

Now, the American political system is asking people to choose between their right to participate in American democracy and their right to health, a price which the most vulnerable can neither afford to pay, nor not pay, in light of the current pandemic. Thus, COVID-19 is a dual threat—to public health and to our democracy.

The authors would like to thank Dr. Bita Amani and Dr. Chandra Ford for their helpful feedback on this piece.

Mienah Z. Sharif is a Postdoctoral Researcher at the Center for the Study of Racism, Social Justice and Health at UCLA and a member of the Center’s COVID-19 Taskforce on Racism and Equity, studying racism and structural determinants of health across the lifecourse.