Defenders of USPS push back against Trump's attack: "There's no vote-by-mail if there's no postal service" 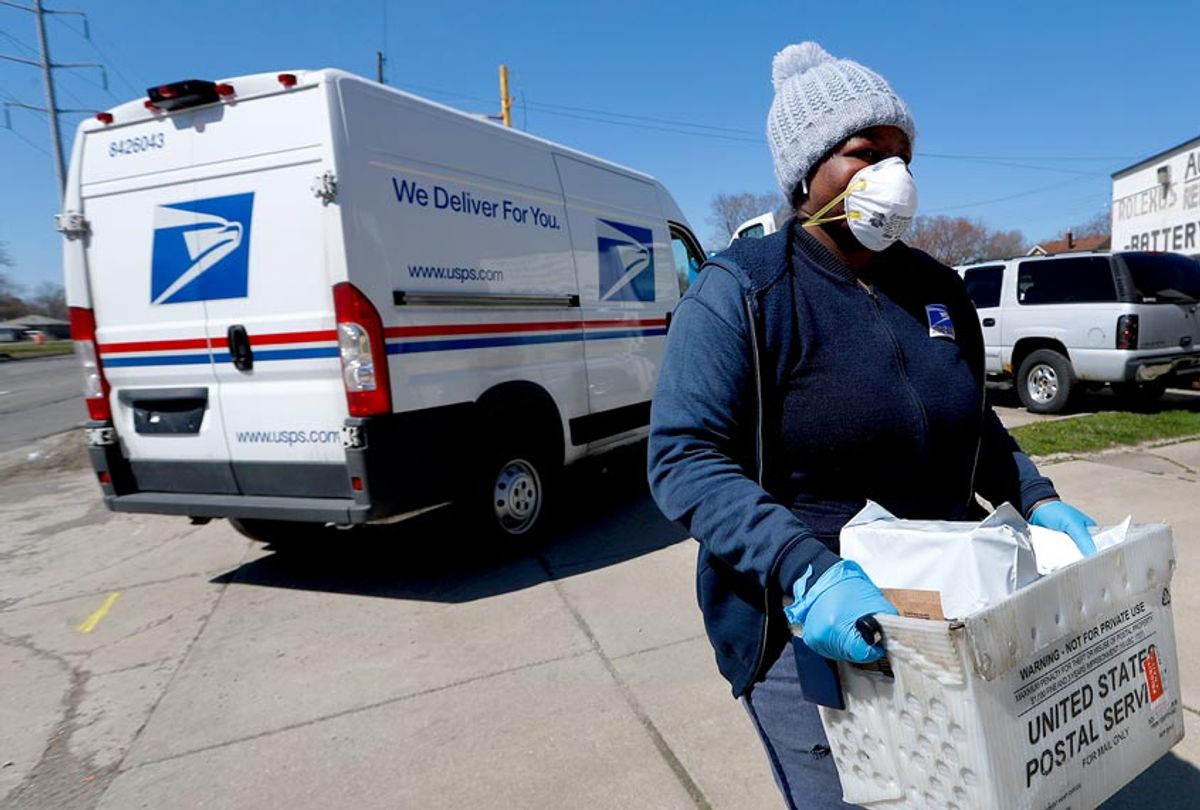 As the Trump administration continues its refusal to save the U.S. Postal Service from financial collapse amid the coronavirus pandemic, people nationwide are stepping up to bolster the vital federal agency by purchasing stamps in bulk and demanding action from Congress and the White House.

Using the hashtags #USPostalService and #SaveUSPS, supporters are encouraging the purchase of stamps and other products from the USPS in the absence of emergency funding from the government.

The viral campaign took off after Postmaster General Megan Brennan last week called on Congress to take immediate action to shore up the USPS. First-class and marketing mail, the service's top two funding sources, have slowed down significantly due to the pandemic.

"We are at a critical juncture in the life of the Postal Service," Brennan said. "The sudden drop in mail volumes, our most profitable revenue stream, is steep and may never fully recover. We now estimate that the COVID-19 pandemic will increase the Postal Service's net operating loss by more than $22 billion over the next 18 months, and by over $54 billion over the longer term, threatening our ability to operate."

According to the Washington Post, President Trump in March personally blocked an emergency funding package for the USPS, claiming that higher shipping rates for private retailers and delivery companies including Amazon and FedEx would create competition for the service and allow it to retain revenue.

After lawmakers agreed to include a $13 billion bailout for USPS in the Coronavirus Aid, Relief, and Economic Security (CARES) Act, the administration suggested it would block the funding.

"You can have a loan, or you can have nothing at all," Treasury Secretary Steven Mnuchin reportedly told Congress, leading to a $10 billion loan for the USPS instead.

The service has gone without federal funding since 2006, subsisting instead on revenue from postage stamps and other products.

Sen. Bernie Sanders, I-Vt., on Sunday joined Brennan in calling on Congress to save the postal service, saying Trump is looking to fulfill a longtime right-wing goal of privatizing mail delivery.

On social media, supporters of the USPS shared how millions of people have relied on the service, which dates back to 1792 and whose existence is enshrined in the U.S. Constitution.

"The USPS is a lifeline for rural communities like mine in [Illinois' 16th congressional district] and we should fight to strengthen it, not let it fail," U.S. House candidate Dani Brzozowski tweeted. "The USPS employs over 600,000 Americans, and over 100,000 veterans. Their jobs are on the line."

The service is a "vital part of the public health response," Association of Flight Attendants President Sara Nelson tweeted, noting that millions of Americans obtain their "life-saving and life-supporting medicines, supplies, food, and other essential goods" through the mail.

In order to save the USPS, advocates said, Congress must take urgent action — and simply leaving it up to consumers to buy postal products, though an inspiring gesture, would not be enough.

"Our public Postal Service needs all American leaders — Democrats and Republicans alike — to provide urgent and ongoing financial support from the Federal Government during this public health and economic crisis," wrote U.S. Mail Not for Sale, an advocacy group, in a petition.

Critics of Trump's refusal to bail out the postal service — while approving a relief package which includes a $500 billion fund for wealthy private corporations to use with little or no congressional oversight — said the attacks on the USPS are likely related to the right-wing push against a vote-by-mail system amid the pandemic.

"There is no [vote-by-mail] if there is no postal service," wrote historian Joshua Zeitz. "Democrats in Congress need to draw a line in the sand."