"Facts and science matter . . . The rule of law matters . . . In other words, elections matter," Obama says 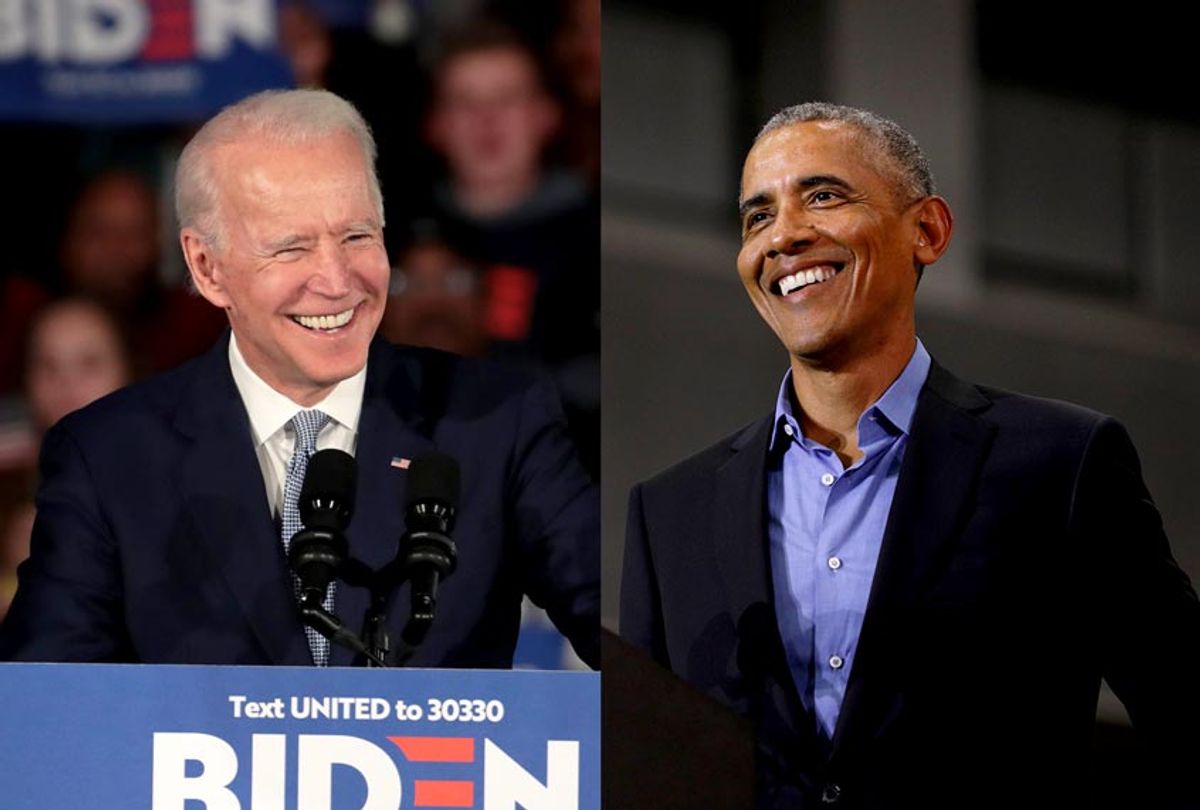 Obama said the "spirit of looking out for one another" seen amid the coronavirus crisis "also has to be reflected in our national government," and the country needs "the kind of leadership that's guided by knowledge and experience, honesty and humility, empathy and grace."

"That's why I'm so proud to endorse Joe Biden," Obama said. "Choosing Joe to be my vice president was one of the best decisions I ever made, and he became a close friend. And I believe Joe has all the qualities we need in a president right now."

Biden was the "perfect partner" when "I needed one the most," because "Joe gets stuff done," he added.

"Joe helped me manage H1N1 (swine flu) and prevent the Ebola epidemic from becoming the type of pandemic we're seeing now," Obama said. "He helped me restore America's standing and leadership in the world . . . Joe has the character and the experience to guide us through one of our darkest times and heal us through a long recovery."

Obama appeared to take multiple shots at President Donald Trump in his remarks.

"I know [Biden will] surround himself with good people: experts, scientists, military officials," Obama said, "who actually know how to run the government and care about doing a good job."

Obama praised the other Democratic candidates who ran against Biden as "talented and decent" with strong track records and platforms.

"And that's certainly true of the candidate who made it farther than any other: Bernie Sanders," Obama said. "Bernie's an American original — a man who has devoted his life to giving voice to working people's hopes, dreams and frustrations. He and I haven't always agreed on everything, but we've always shared a conviction that we have to make America a fairer, more just, more equitable society."

"The ideas he's championed — the energy and enthusiasm he inspired, especially in young people — will be critical in moving America in a direction of progress and hope," he added.

Obama also remarked on the health and economic situation in the country, pointing out that he would not run on the same platform if he ran again today.

"The world is different. There's too much unfinished business for us to just look backwards," he said. "We have to look to the future. Bernie understands that, and Joe understands that. It's one of the reasons Joe already has what is the most progressive platform of any major party nominee in history."

"Even before the pandemic," he added, "it was already clear that we needed real structural change."

The country needs to do more than "tinker around the edges," Obama said.

"We have to go further to give everybody a great education, a lasting career and a stable retirement," he continued. "We have to protect the gains we made with the Affordable Care Act, but it's also time to go further. We should make plans affordable for everyone, provide everyone with a public option, expand Medicare and finish the job so that health care isn't just a right but a reality for everybody."

Democrats "agree" that strong reforms are needed, but that "only happens if we win this election," he warned.

"Because one thing everybody has learned by now is that the Republicans occupying the White House and running the U.S. Senate are not interested in progress," Obama said with a chuckle. "They're interested in power. They've shown themselves willing to kick millions off their health insurance and eliminate pre-existing condition protections for millions more. Even in the middle of this public health crisis. Even as they're willing to spend a trillion dollars on tax cuts for the wealthy. They've given polluters unlimited power to poison our air and our water and denied the science of climate change just as they denied the science of pandemics."

"Repeatedly, they've disregarded American principles of rule of law, and voting rights and transparency," he added. "Basic norms that previous administrations observed regardless of party. Principles that are the bedrock of our democracy. So, our country's future hangs on this election."

Obama's endorsement came one day after Sen. Bernie Sanders, I-Vt., formally endorsed Biden less than a week after suspending his campaign. Obama similarly waited until Sanders left the race in 2016 to endorse Hillary Clinton, his former secretary of State.

Biden claimed last year that Obama did not immediately back his candidacy, because he had asked the former president "not to endorse" him.

"Whoever wins this nomination should win it on their own merit," Biden said at the time.

But Biden has made his close relationship with Obama a focal point of his campaign speeches.

"If you notice, every major historian has written about the presidency and the vice presidency, and they've said of late that no vice president or president has ever been closer than Barack Obama and Joe Biden in American history," he told Iowa voters in January. "That's been the consensus. And there's a reason for that — because we both trusted each other completely. And we knew — and he knew from the beginning — I would never, ever, ever do anything, that was inconsistent with his interest."

Obama stayed quiet on Biden throughout the race while appearing to take shots at candidates with far more progressive platforms.

"My one cautionary note is I think it is very important for all the candidates who are running at every level to pay some attention to where voters actually are," Obama said in November, warning that candidates should not be "deluded into thinking that the resistance to certain approaches to things is simply because voters haven't heard a bold enough proposal."

Longtime adviser Valerie Jarrett told CNN that Obama believed it was "important" to let the candidates "stand on their own two feet" before using his support to rally "a broad spectrum of the Democratic Party — both the progressive and moderate wings."

Obama remains the most popular Democrat in the country, but it remains unclear if he can help Biden reach the young voters who overwhelmingly backed Sanders.

Despite his silence in public, Obama played a larger "stealth" role behind the scenes of the primary race, according to The New York Times, arguing that it was important to "accelerate the endgame" after it became clear that Biden would be the nominee.

Obama's "efforts to ease" Sanders out of the race played a "significant role" in the senator's decision, according to the report. Obama did not "directly encourage" Sanders' opponents to rally behind Biden, though he did have discussions with candidates like former South Bend Mayor Pete Buttigieg before he endorsed Biden.