The president’s name will appear on the memo line of every payment, because he cannot legally sign the checks 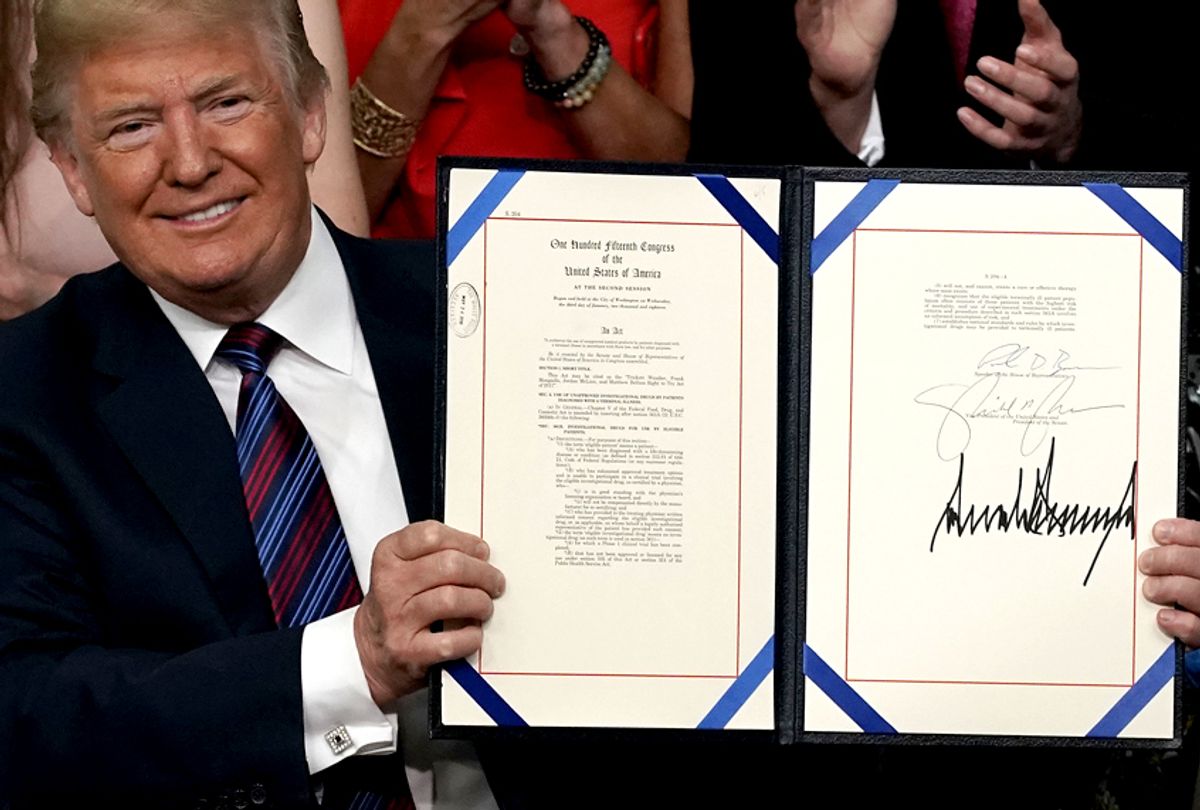 The Treasury Department said on Tuesday that President Donald Trump's name will appear on every mailed stimulus check, a move that senior IRS officials said would delay at least the first round of paper checks.

The Treasury will print "President Donald J.Trump" on the memo line of every paper check, because only career Treasury Department officials can legally sign the checks, The Washington Post first reported. It will be the first time a president's name has ever appeared on a government payment to the public.

Trump previously denied that he wanted to "sign" the checks after it was initially reported earlier this month. Trump pressed Treasury Secretary Steven Mnuchin to let him sign the checks "for weeks," The Washington Post reported, but only career Treasury officials can legally sign the checks. The Treasury decided to print "President Donald J. Trump" below the words "Economic Impact Payment" on the memo line of every mailed check.

The checks are scheduled to be sent Thursday to the Bureau of the Fiscal Service, which will print the checks, but senior IRS officials told The Post that the change is expected to delay the first printing.

"Any last minute request like this will create a downstream snarl that will result in a delay," said Chad Hooper, the president of the IRS' Professional Managers Association.

Speaker of the House Nancy Pelosi, D-Calif., said last week that the checks should be sent as soon as possible without "waiting for a fancy-Dan letter from the president."

A Treasury Department official denied that it would cause a delay.

Hooper said the move was also "an abuse of government resources."

"In this time of need for additional resources, anything that takes our focus from getting those checks out the door and hampers the equitable, fair administration of the tax code is not something we can support," he said.

"Taxes are supposed to be nonpolitical, and it's that simple," Nina Olson, the IRS' former longtime National Taxpayer Advocate, told The Post. "It's absolutely unprecedented."

Olson told the outlet that IRS officials pushed back in 2001 when the Bush administration asked the agency to send a letter along with economic rebate checks seeking to take credit for "giving you your money back."

Though Treasury Secretary Steven Mnuchin said the bulk of the payments will be sent electronically, the IRS is scheduled to begin sending mailed checks to about 70 million Americans in the coming days.

The first wave of checks will be sent electronically to people who filed a tax return in 2018 or 2019 and provided the IRS with their direct deposit information. Paper checks will be sent to those who have not provided their banking details, though the IRS created a page for non-filers to submit their information. It is expected to roll out a portal this week for filers who did not provide their banking information to enter their details.

The checks are expected to be sent out at a rate of 5 million per week, meaning that some people could get their checks until as late as September. The department has said it will prioritize payments to the lowest-income taxpayers first. Single filers earning less than $75,000 per year will get $1,200 ,while married couples earning up to $150,000 will receive $2,400. Parents will also get $500 per child under 17. The payments phase out for people earning more than the threshold.

Trump initially pushed for a payroll tax cut, which would overwhelmingly benefit the rich and take a long time to reach the public. He backed the direct payment plan after it was floated by Sen. Mitt Romney, R-Utah, and Sen. Josh Hawley, R-Mo. The president has since declared the bipartisan plan a "Trump administration initiative."

The decision to plaster the president's name on the checks comes as Trump increasingly politicizes the response to the coronavirus pandemic. He has turned his daily coronavirus briefings into wide-ranging, rally-like events which give him the opportunity to attack targets like the World Health Organization and journalists while pushing false conspiracy theories about voter fraud to rev up his base. He has doled out life-saving ventilators to vulnerable Republican allies facing tough re-election fights.

"If you wonder where your stimulus check is, it is delayed so that Trump's name could be added, even though it is Congress that authorized the payments. This is public money, not Trump's money," former U.S. Attorney Barb McQuade tweeted.

"Apart from inexcusably slowing the checks, this display of ego is a reminder to all of us that the one and only thing Donald J. Trump cares about is . . .  Donald J. Trump," Harvard Law Professor Laurence Tribe added.

"You are getting your money late because the President thinks it is more important that his name be on the check than that you are able to pay your bills on time," Sen Brian Schatz, D-Hawaii,  said. "This is not a rhetorical flourish. The checks are delayed. Because Trump."

"17 million people have lost their jobs. Millions can't pay rent, afford food, and are sinking into debt. And the president is delaying relief for them so he can see his name on a check," Rep. Ilhan Omar, D-Minn., added. "Trump first, America second."