COVID-19 is accelerating the Republican Party’s descent into authoritarianism 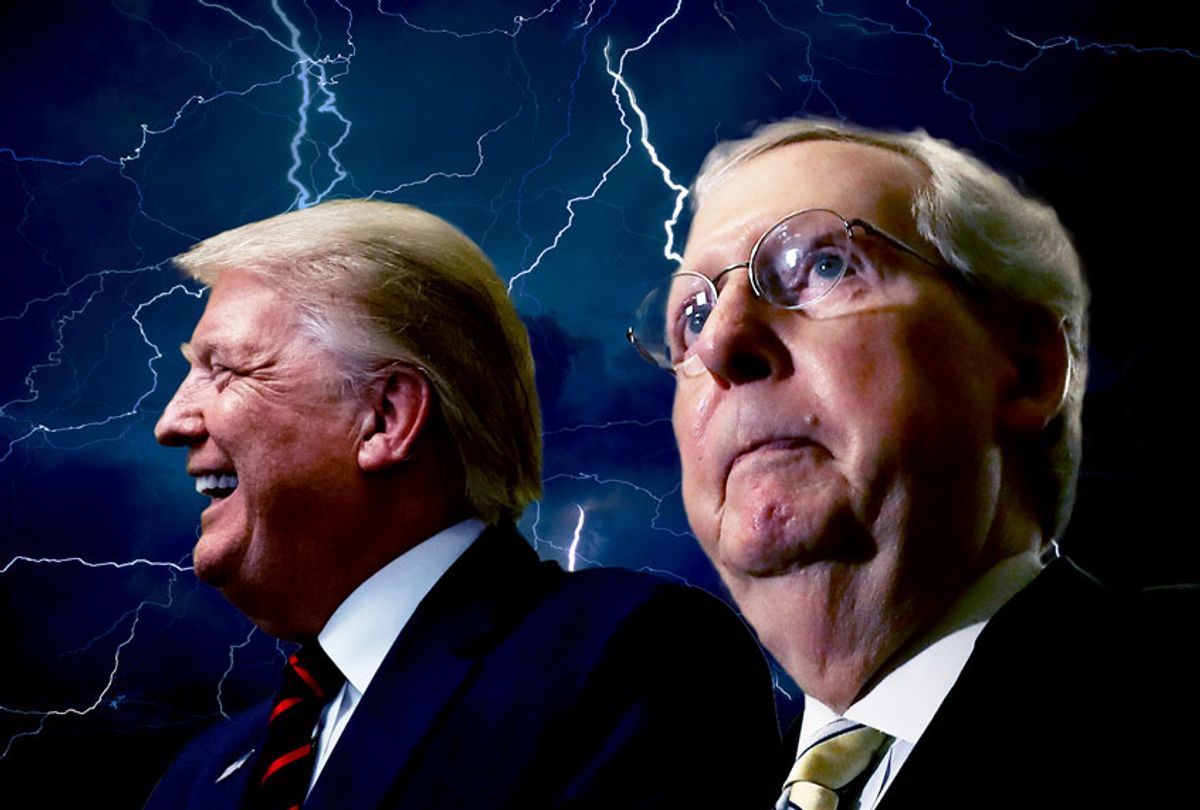 "When somebody's the President of the United States, the authority is total."

That Maya Angelou quote about believing people when they show you who they are gets tossed around quite a bit in reference to the 45th President of the United States, but it seems like no matter how many times Donald J. Trump beats us over the head with the message, there are still a lot of people who don't quite get it.

So allow me to translate: Trump and his allies within the GOP ecosystem are hostile to democracy. Their response to the COVID-19 outbreak clarifies existing authoritarian trends within the regime and the broader Republican coalition and provides a pretext for accelerating them. Most recently, Trump fired both the Inspector General for the intelligence community who complied with the law and passed on a whistleblower complaint about Trump's attempt to strong arm Ukraine to Congress, and the Inspector General originally responsible for overseeing over $2 trillion in pandemic bailout funds. (We'll return to these offenses.)

In "How Democracies Die," Harvard political scientists Steven Levitsky and Daniel Ziblatt provide a checklist of authoritarian behavior which weaken and eventually destroy democracies. They include: Undermining the legitimacy of elections; denying the legitimacy of political opponents; tolerating or encouraging violence and attempts to curtail civil liberties, including or especially the freedom of the press. The Trump administration checks every box.

Once we accept that the United States is functioning more like an autocracy, the bumbled response to COVID-19 starts to make much more sense. And that understanding also allows us to better prepare ourselves for the opposition that's required to defend our democracy.

But first things first: The Trump administration knew months ago that this pandemic was going to be bad.

Classified briefings in November, in January, and again in February warned that massive loss of life, equipment shortages, and widespread economic disruption were likely to result from the unchecked spread of the coronavirus.

Going back a little further, Trump's own Department of Health and Human Services (HHS) conducted a series of exercises from January to August of 2019 called "Crimson Contagion," which modeled a flu outbreak in the United States. The previously undisclosed conclusion was that the country was shockingly underprepared for an outbreak of just the type we're now dealing with.

HHS Secretary Alex Azar was informed by Chinese officials of the seriousness of COVID-29 on January 3. With all of this information in hand, did the Trump administration immediately order and distribute PPEs? Stockpile tests? Start enforcing social distancing? Tell the public? Nope. None of that happened.

South Korea and the United States received their first Coronavirus on the exact same day. South Korea immediately took action to protect its citizenry. Trump laughed it all off, and claimed it was like the seasonal flu and that Democrats and the media were exaggerating the threat to hurt him politically. South Korea has seen 222 deaths. The United States: 34,000 and counting, as of this writing.

The magnitude of this administration's failure to act cannot be understated. Taking action just two weeks earlier, according to the analysis of two epidemiologists featured in The New York Times, could have prevented 90% of the deaths we've seen in the United States.

Instead of useful information, we got denials and obfuscation. Despite classified briefings detailing exactly how bad it would get, Trump continued to hold massive rallies declaring the whole thing a hoax (denial of legitimacy of political opponents/disparaging the media). The President of the United States didn't pursue widespread testing because he thought an increase in the number of confirmed cases would damage his political prospects. The Trump administration took the unprecedented step of ordering HHS toconduct COVID-19 meetings in a classified setting.

What's more, the people in charge made sure they safeguarded their treasure before they bothered to take steps to save lives. We now know that while assuring the public there was nothing to fear, members of Congress like Richard Burr and Kelly Loeffler engaged in insider trading to offload stocks certain to take a massive hit in the coming months. It's unknown whether Trump or his offspring did the same. They have yet to disclose detailed information about their financial interests—another norm crushed under this regime.

And  the GOP buried deep within the CARES Act a provision suspending limitations on how much owners of "pass-through" entities can deduct from their income, providing huge windfalls for the wealthiest Americans. While Republicans in Congress fought against heartier payouts to struggling workers, this provision means on average, the richest Americans will see an average $1.7 million tax break.

It's unlikely given what we know about Trump, his family and his Mar a Lago cronies haven't already sidled up to the trough. Case in point, Trump removed the Inspector General assigned to tracking federal bailout funds before the ink on the emergency legislation had even dried, replacing a veteran watchdog, Glenn Fine, by naming a new Defense Department inspector general and swapping their positions. There's not much preventing him from getting rid of the other members of the oversight panel, should the mood strike him at some future date. Alarmingly, when Trump signed the bill, H.R. 748, into law, he included a statement protesting the oversight, writing, "my Administration will treat this provision as hortatory but not mandatory." He later told reporters that he would provide his own oversight.

Trump continues to use the coronavirus as an opportunity to sow distrust of the media among his supporters. Trump uses his coronavirus briefings, events which Americans tune into hoping for useful information about the deadly pandemic, to slander and delegitimize opponents and the press. Stories of shortages are fake news. Any question daring to question the efficacy of the Trump Administration's response is 'nasty.' He attacks reporters for asking softball questions about empathizing with scared citizens.

Constructing a cult of personality and conflating the personal interests of the dear leader with those of the state are key hallmarks of a dictatorship; this tendency has been exaggerated since the COVID-19 pandemic first hit the United States. Witness the showering of praise by sycophantic officials. It isn't just Vice President Mike Pence prostrating himself at the altar of Trump, but also the Surgeon General and other public health officials.

This pandemic will almost certainly lead to further attempts on the part of the Trump regime and its enablers on the right to consolidate power. This crisis provides the perfect pretext for dismantling civil liberties and institutional guardrails. Trump-friend Viktor Orban exploited the outbreak to grant himself sweeping new powers, including curtailing free speech and postponing elections.

On April 3, while the rest of us were worrying about our health and our jobs, Trump addressed some unfinished business and removed Michael Atkinson as inspector general of the U.S. intelligence community. The President, it should be noted, made no effort to separate his removal of Atkison from his irritation at having been caught extorting an allied government to assist in his re-election effort. And on April 15th, Trump threatened to force a Congressional adjournment through a never before used constitutional power, allowing him to ram through his appointments without any approval whatsoever from the legislative branch. It doesn't matter much that the constitutional argument for this move is tenuous at best – Trump's suggestion is inherently problematic.

Trump is perhaps the most prominent member of the GOP shredding democratic norms, and taking advantage of the disaster for financial gain, but he's not the only one.

We've already seen similar moves in the attempt by Georgia Governor Kemp to use the COVID-19 pandemic as an excuse to shut down elections. Ohio Governor Mike DeWine cancelled the March 17th Democratic Primary, citing health concerns. All seven judges on the Wisconsin Supreme Court judges voted absentee, while voting 4-2 to overturn Governor Tony Evers' last minute order to delay the election in the face of the outbreak.

It is unlikely that the public safety threat of COVID will subside by the national elections in November, therefore making an urgent case for U.S.-wide mail-in voting. Republicans, fearing the results of wider participation, have fought against it. The chair of the Republican Party, Ronna McDaniel, claimed (contrary to all available evidence) that Democrats "want to take away the safeguards that ensure the integrity of the election process."

More ominously, Barr's Department of Justice has already quietly asked Congress to suspend constitutionally protected rights in the event of an emergency, including an outbreak. Among other things, the proposal would allow judges to hold people indefinitely without trial, and would prevent individuals testing positive for the Coronavirus to seek asylum.

With each escalation of his assault on the rule of law, Trump and his supporters within the GOP have faced little unified opposition. Though Trump's indifference has already cost American lives, there are few calls from the media or Democratic leadership for his resignation. He's demonstrably unfit, spewing lies, endangering every person in this country, and there is no organized, meaningful resistance to his perfidy.