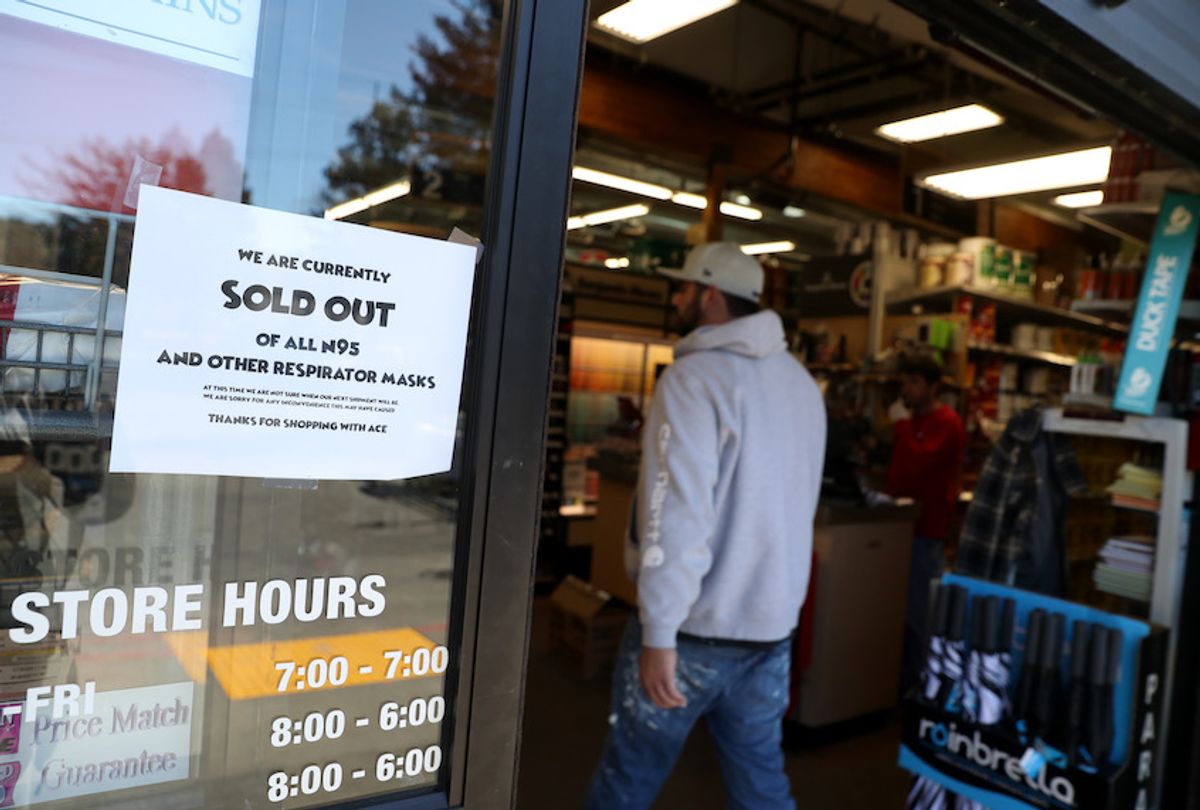 A sign tells customers that all N95 protective masks are sold out at Marin Ace Hardware on March 02, 2020 in San Rafael, California. (Justin Sullivan/Getty Images)
--

The Trump administration awarded an N95 mask procurement contract worth eight times the usual price to a bankrupt company with no employees which has never even manufactured the respirator masks, according to a new report.

The company, Panthera, claims to provide tactical training and "mission support" for the Department of Defense and other government agencies. However, it has no experience with manufacturing or medical equipment, The Washington Post reported this week. Panthera's parent company filed for bankruptcy in the fall, and it has not employed anyone since May 2018.

According to the contract terms, FEMA will pay Panthera $55 million for 10 million N95 respirator masks, or $5.50 a mask. 3M, one of the nation's largest manufacturers, charges the government between $0.63 and $1.50 per N95 mask, depending on the model. Prestige Ameritech, the largest U.S. mask manufacturer, charged FEMA about $0.80 cents per mask in an order of 12 million.

FEMA clarified that Panthera is a distributor — not a manufacturer. A Panthera executive told The Post he had made the arrangements through his military contacts and claimed he would deliver on the contract before May 1 "for certain" and "with a very high-quality product."

FEMA said it complied with federal law in the Panthera purchase, and the contracting officer for the deal "conducted a contractor responsibility determination."

A chronic shortage of N95s has plagued the U.S. since the outbreak began, and demand for the uniquely-configured masks still has not been met, in part because they are difficult to make. The machines that manufacture them take half a year to build and cost upwards of $4 million.

The combination of demand and the U.S. government's laggard response has chummed the market for protective medical equipment, and grifters have been quick to pounce. A Georgia man was charged in mid-April with trying to sell $750 million worth of non-existent masks and other equipment. Major U.S. vendors have caught flak for selling masks to foreign buyers.

In response to questions about persistent mask shortages, President Donald Trump suggested, without evidence, that individuals might be taking the masks "out the back door" of hospitals. The president also often complains that healthcare workers will not sanitize masks for multiple uses.

"We have very good liquids for doing this — sanitizing the masks — and that that's something they're starting to do more and more," the president said. "They're sanitizing the masks." (While FDA guidelines for N95 respirators say they "should not be shared or reused," they stop short of prohibiting it outright.)

The Department of Health and Human Services first notified companies Feb. 24 that it would be placing bulk N95 orders, but it did not act in earnest until a month later. The Trump administration has in recent weeks placed orders for $628 million worth of masks, with HHS accounting for more about two-thirds of those purchases.

"All the traditional procurement rules are out the window," Rick Grimm, director of the National Institute of Governmental Purchasing, which advises state and local governments on procurement, said. Unstable markets are often rife with price gouging and poor products, such as Chinese KN95 masks, which were initially banned by FDA until a dearth of masks in early April forced the agency to accept them. One medical supplies broker told Forbes, "This is the craziest market I've ever seen."

Two days before the KN95 ban was lifted, Salon obtained an email from Robert Hyde — whose text messages with Rudy Giuliani associate Lev Parnas about surveilling U.S. Ambassador to Ukraine Marie Yovanovich made him a target of the impeachment investigation — in which he claimed to have access to 10 million masks, deliverable the next week. He also tweeted photos that day of boxes of Chinese KN95 masks, which were banned in the U.S. at the time.

Hyde told Salon that he would import most of the masks from unnamed Chinese and Israeli suppliers. He also claimed to have a $25 million product order from New York hospitals, though no evidence was provided.

Hyde said he first planned to "collect donations" but took a capitalist approach after learning market prices ran between $1.90 and $6.90 per mask before his own sales markup for target clients: state governments and hospitals.

"Is cost really an issue when people are catching this virus?" he said in an interview. "What's five bucks? What's ten bucks?"

The self-identified "landscaper from Connecticut" and current congressional candidate has repeatedly dismissed the coronavirus pandemic, downplaying the death rate and claiming in a tweet that "we are being lied to" about the virus's lethality. On March 29 he asked, "Are your hospitals overwhelmed, as the panic master's claim?"

Two weeks before that, however, Hyde gained a continuance to a federal grand jury subpoena after claiming to an FBI agent that he had been exposed to the coronavirus at February's CPAC conference. The FBI agent replied, "Lying to federal officials is a federal crime and can be charged as an offense." (The subpoena is in connection to Hyde's texts with Parnas about surveilling Yovanovich.)

In another series of emails and texts, obtained by Salon, a Texas woman named Sheri Aaron pitched a sitting U.S. senator from Virginia on purchasing an array of medical equipment from an anonymous third party, including multiple ventilator models and up to 110 million KN95 masks, at the time banned in the states. Aaron told Salon "the intent was to let those public officials making the calls for assistance aware there may be available supplies from an independent vendor" but did not reveal the name of the supplier.

Kathleen O'Neill contributed to this report.