"They're simply missing in action in handling this epidemic. OSHA has been invisible in this whole response." 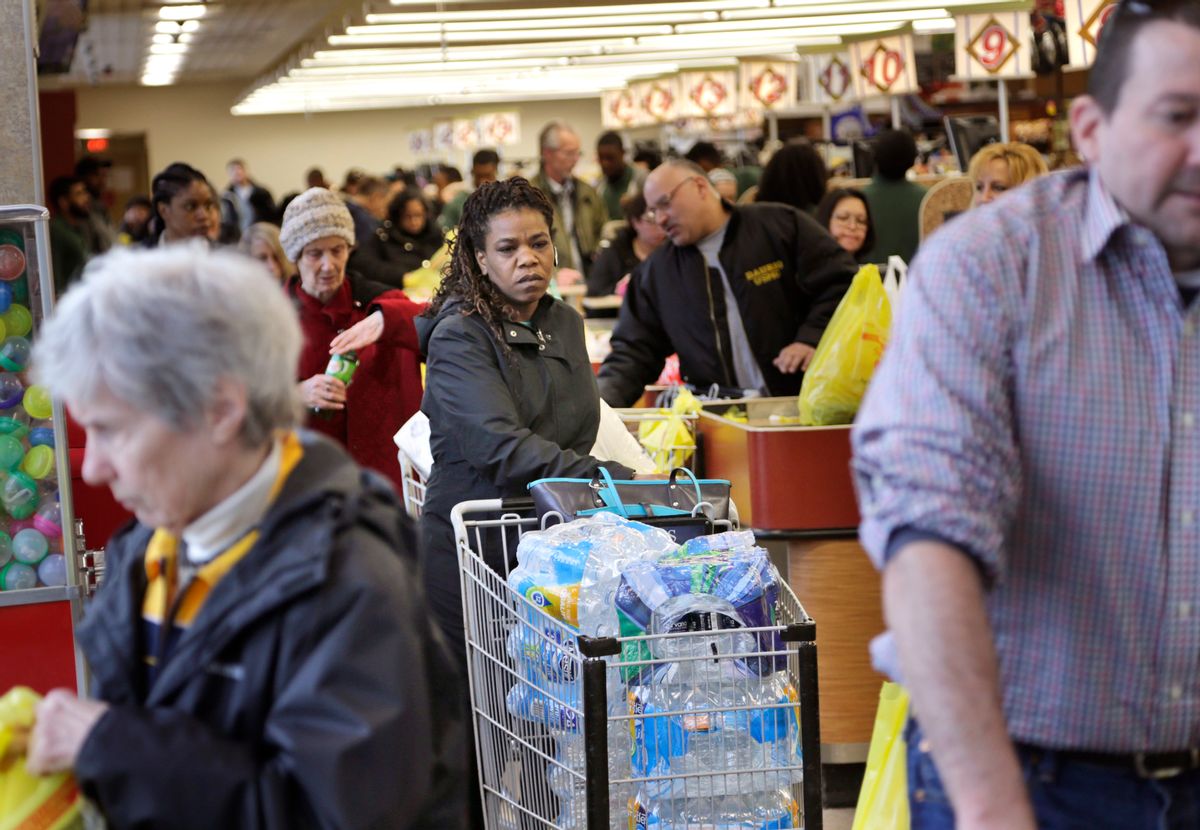 A grocery store is filled with shoppers stocking up on food and other supplies in Paramus, N.J., Monday, March 13, 2017. The Northeast is bracing for a blizzard expected to sweep the New York region with possibly the season's biggest snowstorm. (AP Photo/Seth Wenig) (AP)
--

The Occupational Safety and Health Administration — an agency overseen by Labor Secretary Eugene Scalia — is under fire for failing to uphold its core responsibility to protect workers as the number of frontline employees infected by the novel coronavirus across the U.S. continues to surge, producing what one observer describedas "the biggest workplace catastrophe ever to hit the nation's healthcare workers."

An analysis released Tuesday by the Centers for Disease Control and Prevention found that more than 9,200 healthcare workers have tested positive for Covid-19 and 27 have died as of April 9. "This is likely an underestimation," the CDC acknowledged.

The Washington Post reported Sunday that grocery store workers — who, like healthcare industry employees, have been deemed essential amid the pandemic — have also been hit hard by the coronavirus outbreak.

"At least 41 grocery workers have died so far," the Post reported. "They include a Trader Joe's employee in New York, a Safeway worker in Seattle, a pair of Walmart associates near Chicago, and four Kroger employees in Michigan, as well as employees at meatpacking plants and food processing facilities around the country. Thousands more have tested positive for the virus."

One anonymous 50-year-old grocery store employee told the Post that her workplace "feels like a war zone."

As the devastating impact of the Covid-19 pandemic on frontline workers becomes clearer by the day, critics — including some of the agency's former employees — have increasingly trained their ire on OSHA for refusing to take action to ensure safe and sanitary job conditions. OSHA is currently headed by Loren Sweatt, an appointee of President Donald Trump.

Jordan Barab, who served as deputy assistant secretary at OSHA from 2009-2017, ripped the agency on Tuesday for "sitting on its ass" as workers continue to be infected and killed by Covid-19.

In an interview on CNN Tuesday night, former OSHA chief David Michaels said he would give the agency an "F" grade for its performance during the coronavirus crisis.

"OSHA is simply missing in action in handling this epidemic," Michaels said. "OSHA has been invisible in this whole response."

In addition to Michaels, frontline workers and some current OSHA employees have pressured the agency to use its authority to force employers to comply with federal social distancing guidelines and provide workers with adequate protective equipment. OSHA, however, has thus far refused to heed those demands—which have faced fierce opposition from deep-pocketed hospital lobbyists.

"The CDC has issued recommendations for the public and businesses to follow practices such as social distancing and sanitizing workstations," the Post reported last Friday. "OSHA could make those guidelines mandatory for all employers or for all essential employees but has not done so."

Under the leadership of Scalia, a former corporate lawyer, "OSHA has also decided against issuing safety requirements to protect hospital and healthcare workers, including rules that would mandate nurses and other providers be given masks and protective gear recommended by the CDC when at risk of exposure," the Post noted.

On Monday, OSHA released new guidance that the agency described as an "interim enforcement response plan for coronavirus." The guidance states that OSHA will prioritize inspections of hospitals and other "high-risk" facilities, but the agency did not say that it would require employers to comply with CDC social distancing guidelines.

"If the Department of Labor leadership thinks that asking politely will result in major changes in workplace conditions, they haven't been watching the mounting number of disease cases in workplaces from farms to meatpacking plants to grocery stores," Michaels told Reuters in response to the new guidance.

"In that time many workers have gotten sick and died," Jamieson wrote.