We could soon be harvesting anti-viral antibodies from tobacco plants 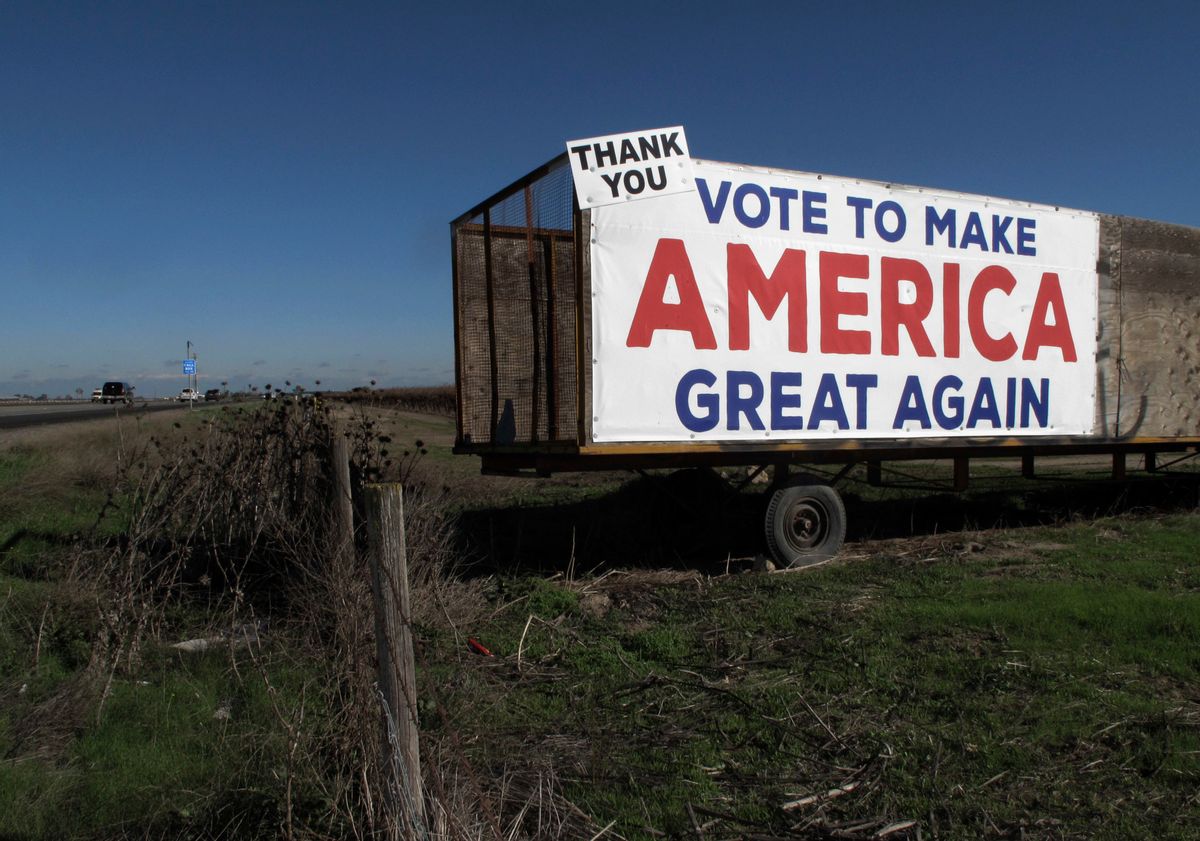 This Dec. 17, 2016 photo shows a Donald Trump campaign sign along a highway near Los Banos, Calif. A California farmer says Donald Trump's campaign vow to deport millions of immigrants who are in the country illegally pushed him into buying more equipment, cutting the number of workers he’ll need during the next harvest. Others in California's farming industry say Trump's tough campaign talk targeting immigrants in the country illegally, including a vast number of farmworkers, spurred them into action, too. (AP Photo/Scott Smith) (AP)
--

With infectious disease outbreaks such as COVID-19 remaining a continual threat, and cancer rates on the rise, we rely on modern medical treatments like antibodies more than ever before. Antibody production is a major source of research animal use. Scientists use what are called "humanized mice," which are mice that have immune machinery to make human antibodies, to create antibodies to human medical treatments. Antibodies function by tagging "foreign bodies" like cancer cells, bacteria, viruses, or anything that isn't human, marking them for destruction by the immune system.

Antibodies produced by mice are used for treating a wide variety of conditions, including cancer, Crohn's Disease, asthma, septicemia, and viral infections. However, obtaining these life-saving antibodies from the blood of mice is expensive, not to mention lethal for the animals themselves.

"Plantibodies" offer a new solution to this problem. These are antibodies made from plants that have been genetically engineered to express human antibodies. They've been in use, under the radar, for a while. Perhaps the most notable plantibody cocktail is the ZMapp Ebola vaccine that was used to try and stem the outbreak in the Dominican Republic of the Congo (though ultimately found to be less effective than other therapies).

Jun-Gyu Park and colleagues from University of Rochester Medical Center recently showed that human antibodies produced in tobacco plants can lower influenza infection rates in guinea pigs. When sick guinea pigs were treated with plantibodies and housed with healthy guinea pigs, they were less likely to transmit the virus to their unprotected cage-mates. The researchers concluded that these particular plantibodies have the ability to protect the animals from catching and transmitting influenza, even when they only took the plantibodies 6 hours before infection (compared to influenza vaccination, which requires 2 weeks or more to become effective).

The same researchers previously isolated an antibody that effectively killed the influenza virus in several cell and animal models. Building on this exciting finding, this research ported the same antibody to be produced in tobacco plants instead in a lab. Given the antibody worked as well against influenza virus in guinea pigs when produced in tobacco plants compared to cell culture methods, this provides an alternative with a much lower manufacturing cost.

There are concerns about plantibodies being allergenic in animals and humans. Because of the slightly different ways that plants produce proteins in comparison to animals, plantibodies may be recognized by a patient's body as being foreign, triggering an allergy-like immune response. In addition, plantibodies cannot be produced in all plants, further limiting options for production.

Crop researchers produce plantibodies by genetically altering corn, alfalfa, tobacco, and a variety of other crops. However, scientists and politicians agreed it would be safest to reduce contamination potential by restricting plantibody production and research to "non-consumptive crops." This would ensure food crops wouldn't be accidentally contaminated with antibody-producing genes.

While it rarely makes headlines, seasonal influenza continues to cause 12,000-61,000 deaths and millions of cases of illness each year. The current influenza vaccine is great, but it comes with a number of problems, like the low number of people who get the vaccine each year, and the ever-changing nature of seasonal influenza varieties circulating. With ever-growing resistance to antivirals, influenza remains a great threat for a future pandemic.

Plantibodies could be an alternative to vaccination, which is often skipped entirely because it's seen as being unnecessary or ineffective, and antivirals, which are resulting in resistance. Plantibody-based vaccines are more stable at a greater range of temperatures compared to standard vaccines, which must be kept at a specific temperature and have a short life. Another fear regarding influenza vaccination is how vaccines are made: using a lot of eggs. This is a problem for those allergic to eggs, and for avian influenza, which can wipe out egg supplies, creating a shortage for vaccine creation come flu season. A plantibody treatment does not face these same crises, and tobacco plants are extremely hearty, non-consumptive crops, making them an ideal plantibody source.' 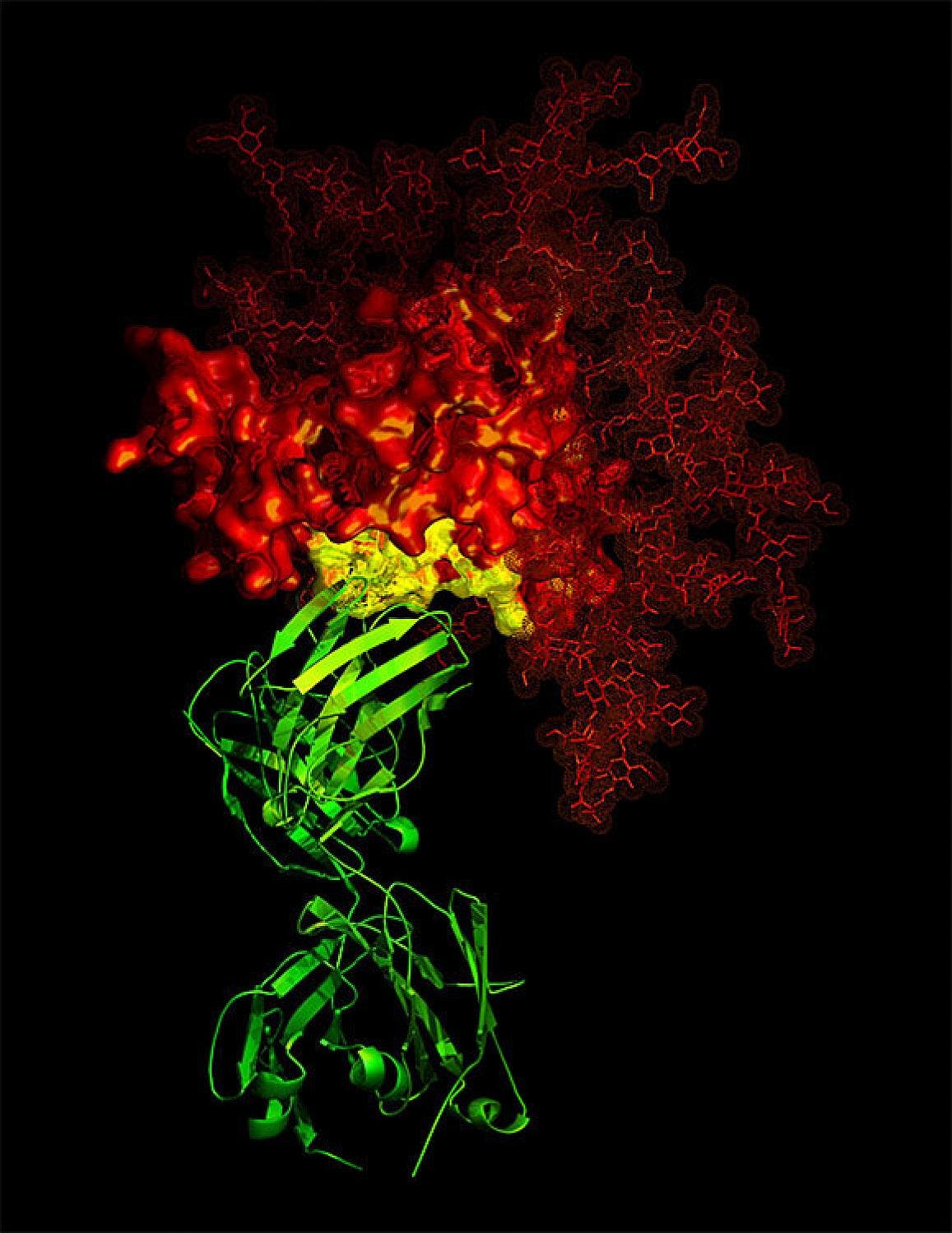 An example of an antibody (green) targeting a critical area (yellow) of a viral protein (red, in this case from HIV).

The finding that guinea pigs not only transmit viruses less efficiently to their cage-mates, but also become less sickened shows another benefit to using plantibodies. Vaccines are intended to prevent us from getting diseases by giving our immune system a chance to build immunity against a dead or pseudo-virus before we come in contact with the real virus. However, being vaccinated against influenza doesn't necessarily mean you won't catch the flu. Mismatches between the vaccine strain and the strain circulating during that particular season, lack of herd immunity from low vaccination, and a host of other problems can still lead to infection. However, if anti-flu plantibodies can make people less infectious if they do become infected, that can limit viral spread on its own.

Plantibody research is of great interest to the medical system, animal ethics groups, and the economy. For ethical reasons, they are better than using mice, ferrets, rabbits, or other animals that traditionally have been used for antibody production. They are also more inexpensive than traditional antibody production because of the limited processing required compared to harvesting antibodies from animals like mice. They can be scaled up and produced in high quantities for clinical use, as was done for the ZMapp Vaccine, making their use a feasible medical treatment.

Plantibodies have the potential to increase accessibility to medical treatments for a variety of ailments which previously required expensive or difficult-to-transport medications — for example, vaccines often have to be kept at a low temperature during transport, which can be difficult in hot or developing countries. From influenza to Ebola, coronavirus to cancer, this new treatment is sweeping the pharmaceutical field, even claiming a line in the $7.2 million Euros Horizon 2020 project, which was awarded to the John Innes Center to fund their research on plantibody development.