Coronavirus conspiracy theories go from the margins to the mainstream

Was it Chinese germ warfare? Are scientists deliberately tanking the economy? These views and more are leaking in 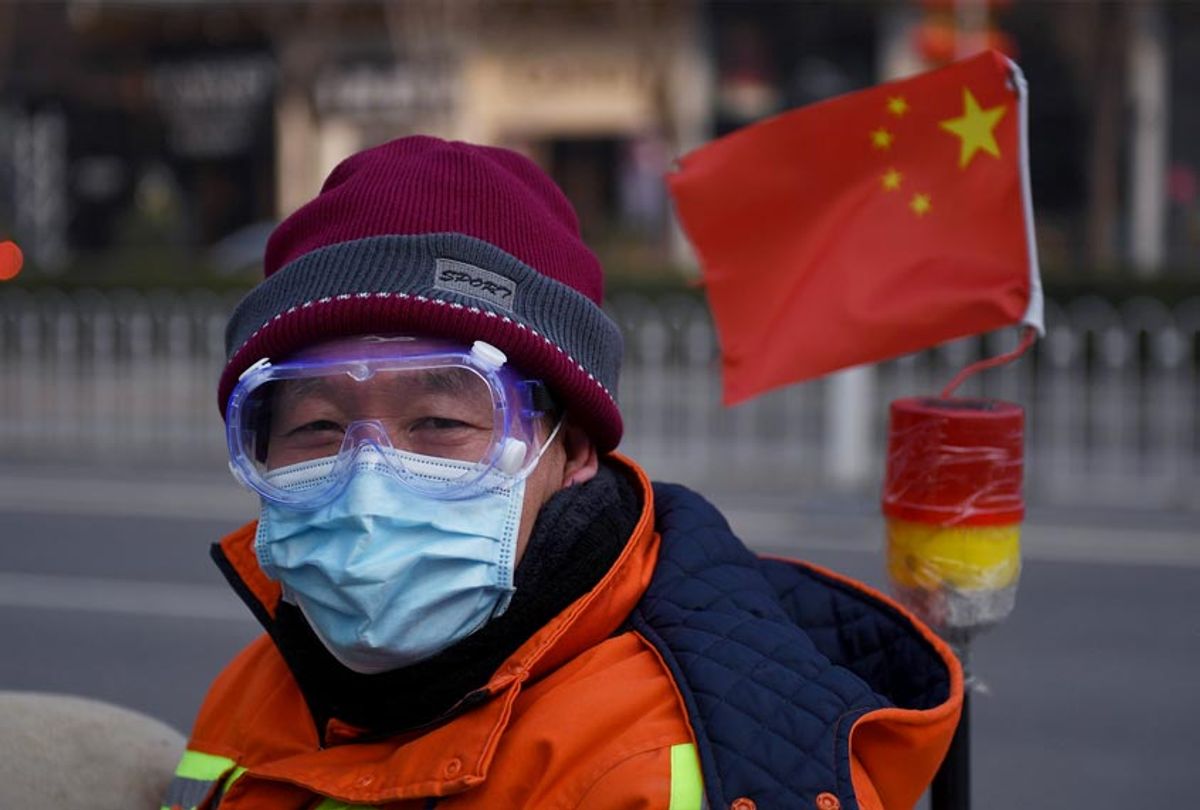 The fact that President Trump attacked the official U.S. state broadcasting outlet, Voice of America, as an organ of Chinese government propaganda (NPR, 4/10/20) is a testament to just how important anti-China rhetoric is to his political strategy in regards to the COVID-19 pandemic. In context, VOA is simply not aggressive enough in pushing the narrative the administration wants to get out there. But the administration has other avenues.

Trumpist quackery takes on a few key forms, one being that the Chinese government is responsible for unleashing the virus on the world as some act of germ warfare, and the other being that scientific wisdom on responding to the crisis is liberal fakery meant to unnecessarily cripple the economy. We can't disregard these as lunatic conspiracy theories on the fringes. These speculations, rumors and outright lies have a way of starting in partisan media and bubbling up to a level where they affect our political discourse and public health.

For example, the South China Morning Post (4/12/20) reported on a theory

spread by Bill Gertz of the Washington Times, whose motto is "Real. Trusted. News." His story was based almost entirely on an Israeli biological warfare expert, one Dany Shoham. It pointed out that the epicenter of the outbreak was just 32 kilometers from the Wuhan Institute of Virology, which houses China's only P4-Level Biosafety Laboratory, the highest-level classification of labs that study the deadliest viruses on earth.

This theory is taken further by Tyler Durden of the right-wing news blog Zero Hedge. He has identified a mainland Chinese researcher at the Wuhan Institute only because he is a "pioneer of global bat immune system research," and that his CV makes him well-qualified to create a bioweapon like the new coronavirus. Twitter has suspended the blog's account following the publication of the scientist's personal details.

On a less outlandish note, the US government-funded Radio Free Asia has just rebroadcast a 2015 report about the Wuhan institute being China's most advanced virus research lab. 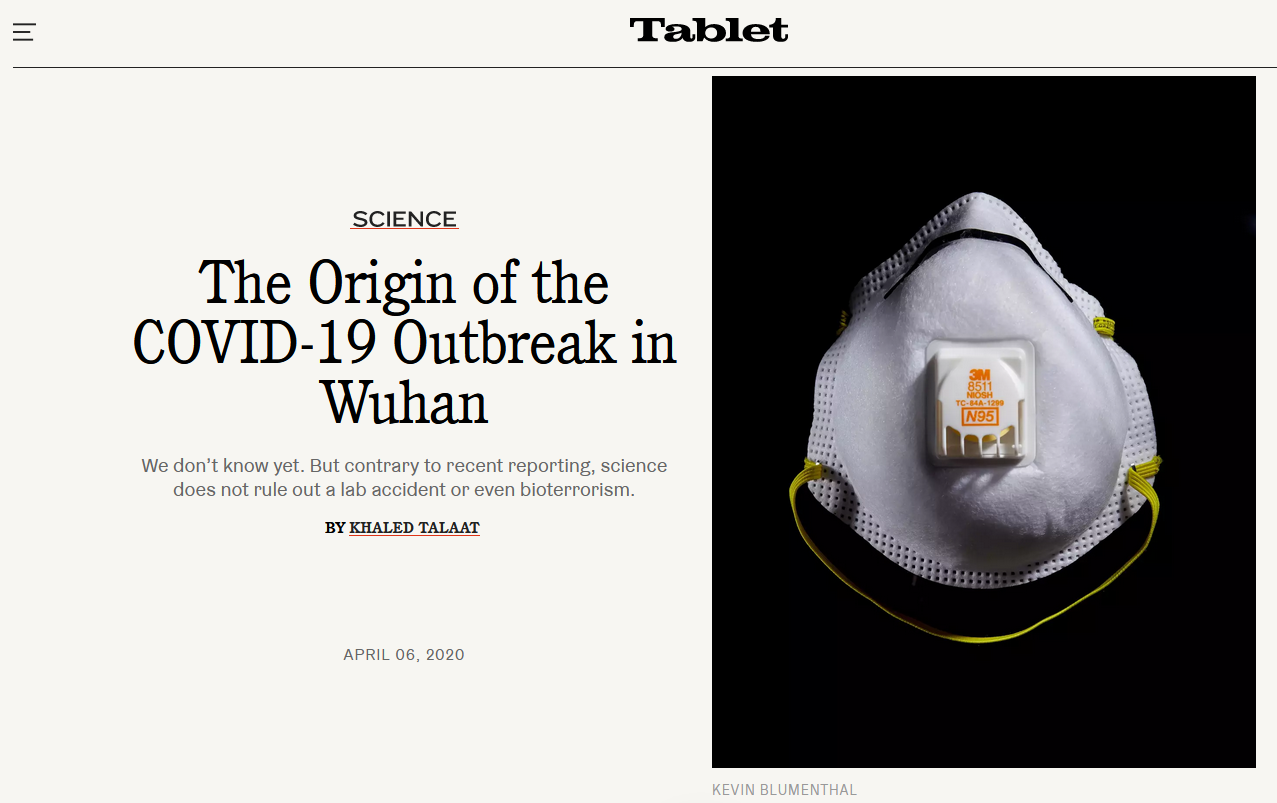 Tablet (4/6/20): "At this point, whether the present outbreak is a result of bioterrorism or not is unsettled, and if it is, it is as of yet unclear when or how the release might have happened."

In a piece in the Jewish magazine Tablet (4/6/20), nuclear engineering doctoral candidate Khaled Talaat explores the possibility that the virus may have originated as a bioweapon. It's mostly speculation, with plausible deniability at the end: "It is possible that the virus could have fully originated or evolved in nature without human intervention in transmission." Nevertheless, the article delivers the alternative theory that the pandemic was not, in fact, the result of a zoonotic jump, but something much more sinister.

It's strange, then, why a Jewish-interest magazine would even run this, considering it seems far out of its usual coverage. But as David Shasha of the Center for Sephardic Heritage notes, given the magazine's general pro-Israel politics, it follows that its editorial line would echo the current administration. The "article reflects the Wuhan meme," he said, pointing to the internet theory that a Wuhan lab is responsible for the virus. "It is a very curious confluence that points to collusion."

Democracy Now! (4/16/20) sharply questioned the notion that the virus might have come from a lab, with disease ecologist Peter Daszak telling Amy Goodman: "I've been working with that lab for 15 years…. There was no viral isolate in the lab. There was no cultured virus that's anything related to SARS coronavirus 2." 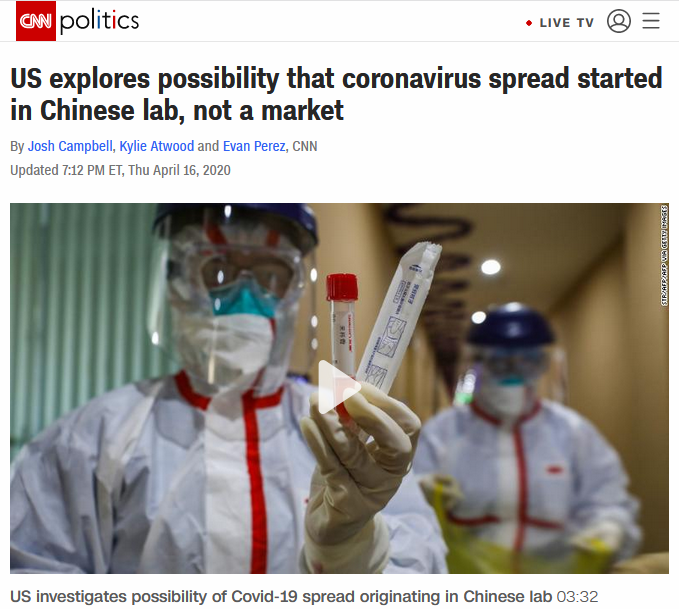 CNN (4/16/20) reported that "the US does not believe the virus was associated with bioweapons research and the sources indicated there is currently no indication the virus was man-made" — but that didn't dissuade the network from promoting the idea in a headline.

But by that point, the story had already made its way to Fox News (4/14/20), and would later surface on CNN (4/16/20), which reported that "the United States government" (which covers a lot of ground) is "looking into the possibility that the novel coronavirus spread from a Chinese laboratory rather than a market" — a formulation that allowed the network to spread a rumor without the need to present any actual evidence. CNN noted that the theory had been "pushed by supporters of the president, including some congressional Republicans," in an illustration of how stories that start out on the margins can find political advocates and make their way into establishment media.

Newsweek (3/29/20) had earlier promoted speculation about Chinese duplicity by reporting that observations of cremations in Wuhan suggested that the government was lying about its number of COVID-19 deaths. (In April, China upped its count of COVID-19 deaths in Wuhan by 50% — NPR, 4/17/20 — much as New York State's death toll jumped by 60% when missed cases were added in — BBC, 4/15/20.) Again, the Newsweek report gave itself an insurance policy:

Math based on urns, assumptions and social media isn't anything to go by. But it offers one estimation of the city's real death figure and further lends credence to the skepticism held by many of the accuracy of the Chinese government's officially reported Wuhan Covid-19 death tally.

But again, it still delivers the propaganda, despite mentioning the weakness of its own evidence. The next paragraph shows just how easily such a speculation can lead into anti-China and anti-Communist fervor:

Republican Sen. Tom Cotton of Arkansas cited the urn deliveries on Sunday to accuse China of misrepresenting the impact of the virus. "A single mortuary in Wuhan reportedly ordered more urns in two days than the Chinese Communist Party has reported total deaths in the whole country," he tweeted. "I'm sure you're shocked by evidence of Chinese lies." 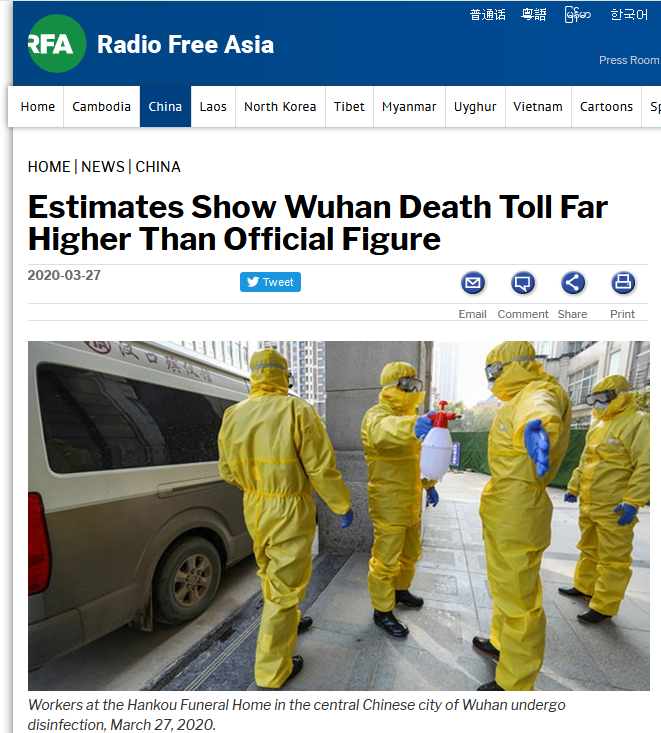 Interestingly, U.S. state media service Radio Free Asia (3/27/20) ran the same story two days earlier. Radio Free Asia exists to promote U.S.-backed narratives in Asia; rather than seeing these theories as part of the partisan fringe, they should be understood as making their way through U.S, state media to mainstream media to Congress.

And the anti-China angle of Radio Free Asia's story is not there by chance. On April 8, its Twitter account shared a cartoon of China using Zoom, the digital meeting platform that has become popular for people working from home, to spy in the United States. This kind of media insinuation has real consequences for U.S. foreign policy in Asia, and could rile up even more of the anti-Asian bigotry that has been on the rise in the U.S. as the pandemic has progressed.

Bethea (whom I have known since junior high school) told FAIR that so-called "medical reporting" in "partisan outlets is more likely to permeate mainstream readerships during a pandemic, because readers are so unusually desperate right now," and that outlets like the Federalist engage in "willful manipulation and fear-mongering, as usual, but in a time of unprecedented fear."

He said that "some of us find ourselves buying the junk reporting, because it represents a kind of life raft away from the paralyzing present moment."

Though it's tempting to brush this off as noise on the margins, the administration clearly listens to far-right organs as much as or even more than mainstream conservative outlets like the Wall Street Journal or Fox News, and outlets like the Hill (4/11/20) show that Trump clearly entertains the idea of easing restrictions and leaving Americans open to viral exposure. Right-wing America takes articles like this seriously, so the idea of even a minority of Americans ignoring social distancing too early still puts the entire country at risk of exposure.

Much like the pandemic itself, this problem will surely get worse before it gets better.