This disaster belongs to Trump, of course — but the Tea Party's nihilistic hatred of government got us here 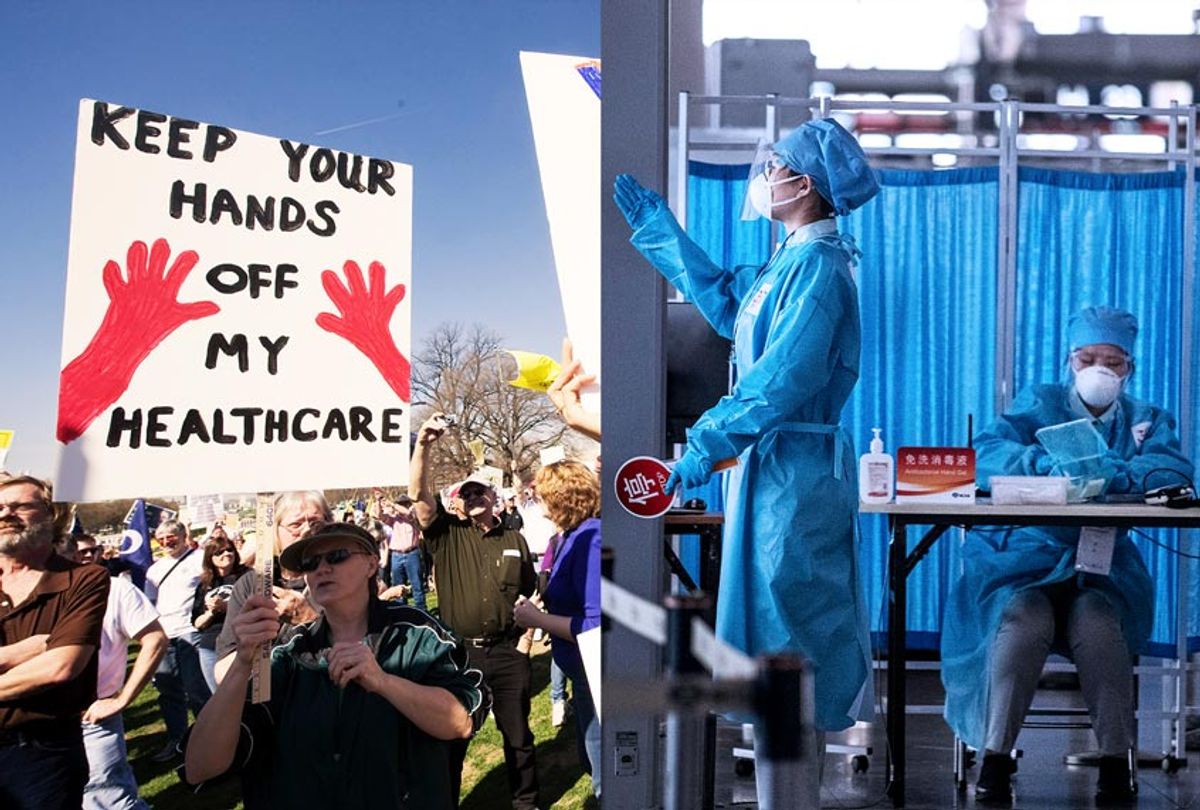 Tea Party supporters demonstrate outside the US Capitol in Washington, DC, on March 20, 2010 against the healthcare bill | Chinese airport security wear protective suits as they wait to check the health of travelers at Beijing Capital International Airport on March 24, 2020 in Beijing, China (Kevin Frayer/Nicholas Kamm/AFP/Getty Images)
--

The catastrophic failure of the United States to prepare itself for the COVID-19 pandemic, and its equally catastrophic failure to mount the kind of "too late but effective" response to a crisis that has often characterized American history — World War II, most spectacularly — has deep roots in recent political and cultural trends.

Dana Milbank of the Washington Post has written the best piece I have read on the pandemic. Milbank connects the dots over the past 21 years, during which time the reckless "we don't need to prepare for anything except war" brand of Republicanism ignored repeated warnings that a pandemic was coming, savaged budgets for agencies like the NIH and CDC, starved state public health capacities and allowed them to wither in half, drove moderate Republicans who supported health-care investment — such as former Sen. Arlen Specter of Pennsylvania — out of the party and presided over a massive shutdown of health care capacity in rural America. Eventually, with the rise of the Tea Party and then the election of Donald Trump, the Republicans surrendered their party to the nihilism of its only remaining principle, articulated by Grover Norquist as "I don't want to abolish government. I simply want to reduce it to the size where I can drag it into the bathroom and drown it in the bathtub."

As Milbank sums it up — do read his piece — we found out that "when you drown government people die."

It's true that other countries with stronger welfare states and no analogy to the Tea Party — including Britain, France, Italy and Spain — also failed to cope with COVID-19 in optimal fashion. But Americans should already have learned this lesson, because the pandemic was not the first example of the price Americans pay for allowing the GOP to shred the domestic safety net. Between the 2010 rise of the Tea Party and 2019, government expenditures on domestic programs declined by one-third — and the results were promptly felt.

America's infrastructure crumbled at an ever accelerating rate, including vital public safety functions: flood control, storm protection and fire prevention. Communities like Cedar Rapids, Iowa, were left unprotected for 12 years after levees were destroyed because right-wing Republicans refused to fund almost a billion dollars of approved repair work. The U.S. Forest Service, charged with protecting 191 million acres with an inadequate budget and fewer firefighters than New York City, simply diverted more than half its fire prevention budget to unsuccessful efforts to fight fires after they started.

Starved of funding and crippled by anti-government congressional and White House interference, enforcement of standards designed to protect citizens from dangerous and irresponsible private behavior collapsed. The FDA utterly failed to intervene in the prescription opioid epidemic, which by 2016 was killing more than 30,000 Americans a year. FEMA, charged with ensuring that local governments prevent construction of new homes in dangerous flood plains, lacks either the resources or the will to prevent the massive expansion of the number of Americans who live in harm's way. Michigan health authorities and the EPA sat by passively while a penny-pinching appointed oversight authority shifted the city of Flint's water supply to a new source, which led directly to tripling the rate of lead poisoning among the city's children.

The annual costs from natural disasters soared, as a destabilized climate and reckless relocation of much of the U.S. population into dangerous areas, rather than away from them, plunged pell-mell forward. Half of all recent U.S. home-building took places in fire-prone areas. Since 2010, the rate of home building in flood plains has outstripped that safe locations — by three times in Connecticut, double in Mississippi.

Then the other crisis for which Tea Party-informed Republicans refused to allow even the most modest preparations, climate change, put these natural and health disasters on steroids. Rising sea levels greatly exacerbated the costs of coastal flooding. Cities like Norfolk, Virginia, concluded that entire neighborhoods were destined to become uninhabitable from higher water. The California fire season has been stretched out by more than two months. Multiple tick species and the diseases they spread are invading huge areas in the East.

The bills for recklessly failing to prepare and prevent keep mounting. Fire losses in California alone reached $12 billion in 2018. The 2019 floods in the Midwest cost $6 billion. In 2017, three of the four most expensive hurricanes in U.S. history — Maria, Irma and Harvey — cost insurers an astonishing $72 billion. Overall, America's 2018 climate disaster bill, as calculated by NOAA, reached $91 billion.

All these costs, of course, will be dwarfed by the catastrophic economic and human losses imposed by the COVID-19 recession.

The Tea Party approach to public safety and protection is rooted in an argument propagated by "Chicago school" economists that while unregulated markets may indeed fail, the likely results of government intervention to protect us from such failures is almost always greater than the risks themselves.

To test the plausibility of this argument — which has been the effective governing philosophy of the United States since Ronald Reagan was elected, even though Presidents Obama and Clinton disagreed with it — it's useful to look at its polar opposite, the Dutch doctrine of zero tolerance for flooding.

After a 1953 epic flood played out more or less the way Americans in low-lying areas expect — inadequate notice, flood control barriers that are washed away or overtopped, heavy loss of life — the Netherlands decided to establish  "zero tolerance" for flooding. Over the next half century a huge network of dams, dikes, sluices and storm barriers was constructed to ensure that the odds that anyone in Holland will die in a flood are below 1 in 100,000 per year. In fact, since 1953 no one in the Netherlands has died in a flood, even though most of the country is below high-water level.

The Dutch place almost no emphasis on rescue and recovery. They do prevention. Every aspect of water management is examined, reexamined and tested. Facilities are rigorously maintained. The current costs are trivial, in national budgetary terms — about $1.5 billion a year! The reason it's so cheap is because prevention almost always trumps recovery. The World Bank estimates that every flood prevention dollar averts the need for $7 to $10 in recovery costs.

That's true of pandemics as well. Milbank reports that avoiding the explosion of the COVID-19 virus in the U.S. would have cost only $4.5 billion a year, and the return on investment from such a bargain is almost incomprehensible. But we have the problem of America's political culture.

Here's what President Trump tweeted about a proposal to protect New York from sea-level rise with a Dutch-style barrier:

A massive 200 Billion Dollar Sea Wall, built around New York to protect it from rare storms, is a costly, foolish & environmentally unfriendly idea that, when needed, probably won't work anyway. … Sorry, you'll just have to get your mops & buckets ready!

Trump may well be right that in this case a sea wall won't work. But note two things: He concedes that the storms will come — just not very often. His suggestion that mops and buckets are all that will be needed after the disaster is Trump's way of avoiding reality: If climate change means higher sea levels, and neither technology nor mops can save Lower Manhattan from being wiped out by higher seas, then perhaps we really do need to follow the Dutch example — and protect ourselves from further climate change.