Trump and the astroturf protests: An ugly, cynical new strategy to divide America

Stoking divisions and driving a new explosion in the pandemic: Republicans think they can win through sheer chaos 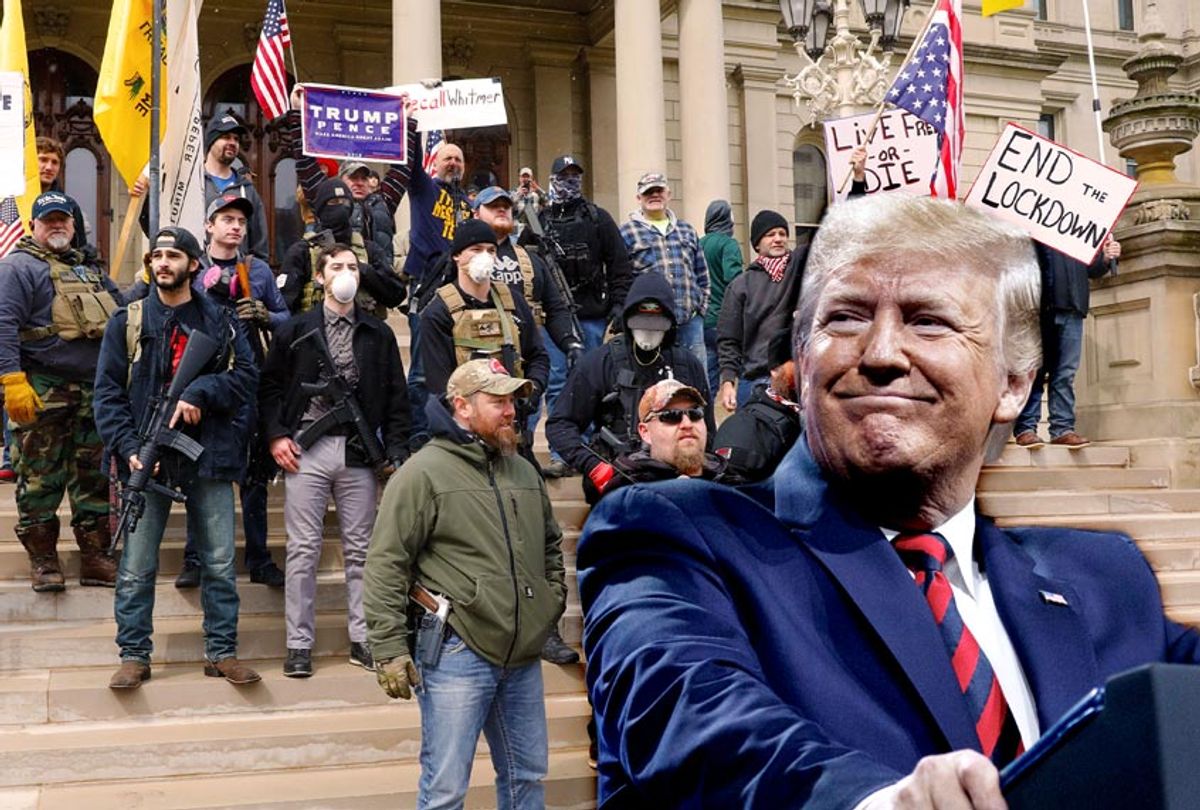 President Trump's daily coronavirus briefing rallies aren't even attempting to be relevant to the ongoing pandemic anymore. To the extent it even comes up, it's entirely Trump bragging about anything that's gone right and blaming others for everything that's gone wrong. If you want to know the latest information about the emergency, you'll need to look elsewhere. These are Trump campaign rallies done for the strict purpose of energizing his base.

If you're reading this, you have probably read and heard vast amounts of reporting revealing the overwhelming failure of the Trump administration in this crisis. Just this weekend we learned that CDC officials were actually embedded with the World Health Organization in January and repeatedly alerted the U.S. government about the coronavirus outbreak, which completely undermines Trump's attack on the organization.

Unfortunately, the foot-dragging and the errors continue. The testing that everyone but Trump acknowledges must be in place before the economy can come back to life is still not available. Hospitals and first responders are still in dire need of medical equipment and protective gear. If the Trump administration pushes people back out of their homes prematurely, there's an excellent chance we'll have another outbreak well before we've recovered from the first one.

It's now obvious that will happen, at least in some places. In Jacksonville, Florida, officials opened the beaches and people flooded back out, with no masks and in close quarters. All over the country there have been small but vocal protests during the last few days, demanding that governors open their states immediately.

As Salon's Sophia Tesfaye has reported, these "protests" are actually organized by astroturf groups modeled on the Tea Party protests more than a decade ago:

FreedomWorks, the instrumental force behind the Tea Party, "is holding weekly virtual town halls with members of Congress, igniting an activist base of thousands of supporters across the nation to back up the effort" led by right-wing commentator Stephen Moore. the Associated Press reported. Other right-wing groups vocally opposing shutdowns include Americans for Prosperity, an organization funded by the Koch brothers, and the conservative Heritage Foundation. There is even a connection to the family of Trump's Secretary of Education, Betsy DeVos. As Michigan's governor noted, the DeVos family foundation helped fund Facebook ads for this week's protest.

Pro-gun activists have gotten in on the act as well. It's an astroturf Tea Party reunion tour. If there's one thing that riles up the right wing, it's apparently the government trying to save lives.

Trump has personally praised the protesters, as has Vice President Pence, even as they both pretend to care about their new guidelines for opening up the country.

All of this seems odd, considering that common sense and all legitimate scientific advice says that prematurely letting our guard down will likely lead to a resurgence of the epidemic, which means shutting down the economy all over again, with even worse consequences. But there's a method to their madness. As chaotic and dysfunctional as they are at governing, Trump and the Republicans are united on their electoral strategy. They've decided that opening up the economy as soon as possible is their ticket to re-election.

According to Politico, conservatives are still convinced that a highly divisive strategy focused entirely on their base voters divisive, is the way to go, even in the midst of an unprecedented public health crisis:

Trump-supported activists are protesting strict stay-at-home orders. Conservative groups' internal polling in red-leaning and swing states show a significant uptick in Americans who favor reopening the country. A growing chorus of Republican lawmakers across the nation are on board.

"If you don't see something start to happen … you're going to see a conservative revolt by our base," said Adam Brandon, president of FreedomWorks, a conservative group which recently polled on reopening the economy. "The worst strategy for him is to keep things shut until August. Trump is basically going to win or lose his election right now, in the next month."

Yes, that would be the same FreedomWorks that is ginning up the protests, along with the other big money groups financed by the likes of Charles Koch. Big-money donors seem to have activated their astroturf groups to get people out in the streets to make sure that Trump feels the pressure from his beloved base to open up the economy. These donors care about preserving their power, privilege and profit margins, but Trump only cares about the November election. They are manipulating him, and his supporters, to make him believe that his ends are aligned with theirs.

Republicans in Congress are doing their part as well. The bill coming up for a vote this week to refill the small-business bailout fund is missing something vital that Democrats and governors of both parties have been begging for: help for state and local governments, many of which are in dire economic trouble and hamstrung by balanced-budget requirements.

You might think that providing them with federal funds to keep the lights on would be a no-brainer. But according to Axios, Republicans will use this prospect as a cudgel to force states to reopen: "The thinking among some Trump administration officials is that many states should be reopening their governments soon and that additional funding could deter them from doing so."

If anyone thinks that depriving aid won't hurt Trump's political enemies more than his allies, they still don't understand how he plays this game. (There's already evidence that more federal aid has gone to red states.) This may end up being the most destructive thing Trump has done, at least in economic terms.

Reality is finding its way into the public consciousness, however. Maybe it's the growing pile of dead bodies — more than 40,000 of them as of Sunday night — or Trump's increasingly unhinged behavior at these coronavirus briefings, but recent polling shows that Trump's rally-round-the-flag bump in support has already dissipated. Gallup has Trump's approval rating down to 43%, from 49% last month, while his disapproval rating is up nine points, to 54%. The latest NBC-Wall Street Journal poll reports that 60% of respondents say that Trump did not take "the threat seriously at the beginning," with a similar number in the Pew poll saying that Trump was "too slow" to recognize the threat. His overall approval average is headed back down to the low 40s, where it's been throughout his entire term.

So it's almost certainly true that the "base strategy" is the Trump campaign's best bet. They will try to run the table again in the swing states and pull off another narrow Electoral College victory. Maybe he'll be the luckiest politician in history and can make that work in the middle of an epic public health emergency that he has botched beyond all measure.

Meanwhile, the country is fracturing in ways I would never have believed possible.

With doctors and nurses and first responders literally dying trying to save people every day, and all of us just trying to get through this nightmare, Republicans have cynically unleashed the same vicious ugliness we saw during the "Obamacare" debates a decade ago. Dividing the country at a time like this is one of the worst things the Republican Party has ever done. How do these people sleep at night?