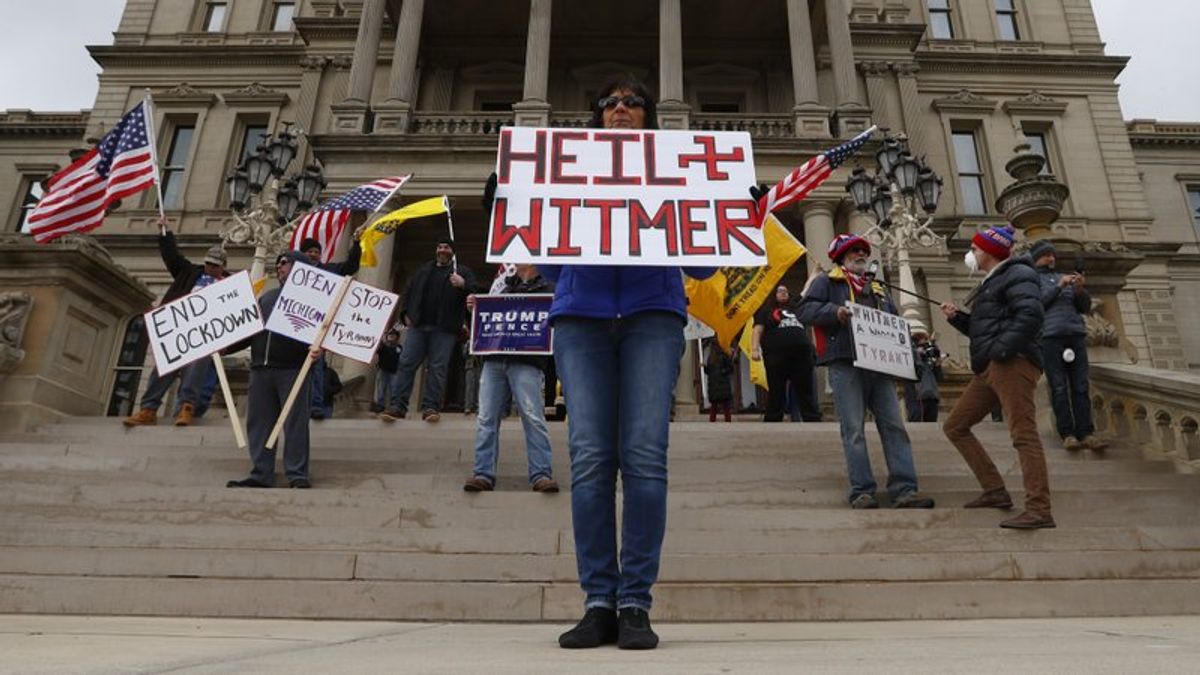 Familiar chants of "Lock her up!" rang out during Wednesday protests at the State Capitol in Michigan, a state Donald Trump flipped in 2016. The day before, protesters carried the "Don't Tread on Me" Gadsden flag, repopularized by the far right in recent years, at a North Carolina rally. In Ohio on Monday, more than 100 protesters swarmed the governor's daily press briefing on the coronavirus response, carrying signs that claimed "the cure is worse than the virus."

This backlash from the far right against attempts to "slow the spread" of the deadly pathogen is a textbook example of what happens when faith in public health experts is undermined — in this case, due to a deliberate, decades-long campaign to erode trust in expertise.

Perhaps all this was to be expected. One of the first signs was the venomous response to workers, like those at Amazon, Instacart and Target who deigned to protest their safety conditions in the midst of a global pandemic. Laborers who called for increased pay and protections to correspond with surge demand were unfairly exploiting a crisis, some right-wing commentators argued. Others in "Trump's death cult," as Salon's Chauncey DeVega has described them, rushed to demand that the powers that be "reopen the country," even as the coronavirus continued to spread, and well before —  shelter-in-place orders had a chance to do their work. The American way, they made clear, means markets must be valued over human lives.

So while Trump's campaign rallies have indefinitely relocated to a socially-distanced White House, it comes as little surprise that his supporters have taken to openly flouting CDC guidelines in order to protest the call for personal sacrifice to help ensure the safety of the community. One unanswered question is whether this is an organic movement or a more organized effort, akin to the AstroTurf Tea Party protests that were prominent on the right during the Obama years.

The protests come just as President Trump's short-lived "rally around the flag" polling bump begins to subside, and as Democratic governors across the nation see their job approval ratings rise. Beginning in Ohio on Monday, then North Carolina on Tuesday and Michigan and Kentucky on Wednesday, with more planned for Arizona in the coming days, these modest gatherings certainly suggest a degree of national coordination. Call it Trump's Tea Party or the right-wing Resistance — no matter how the pushback has been organized, it's clear that the political objective of these protests goes beyond any specific policy outcome.

Protesters against Michigan Gov. Gretchen Whitmer's shutdown orders had promised a car-bound event dubbed "Operation Gridlock," but at least 200 people physically gathered at the steps of the State Capitol in Lansing on Wednesday, armed with Confederate flags, pro-Trump banners and anti-Whitmer signs, some comparing the governor to Hitler. Most protesters did not wear masks. Republican House Speaker Lee Chatfield greeted the protesters by waving an American flag from a window at his Capitol office.

Thousands of people from all over Michigan are converging on our state Capitol today to protest the governor's restrictive "Stay Home" order and get their voices, and car horns, heard. #OperationGridlock pic.twitter.com/bgjH4wKCUQ

Whitmer, a co-chair of Joe Biden's presidential campaign, has become a target of the right after she publicly tangled with Trump over the federal government's inadequate pandemic response. While Whitmer's management the coronavirus outbreak in her state received a 71% approval rating in a poll released this week, Trump's handling of the crisis was rated considerably lower, with only 51% of Michganders approving.

This week, six Republican House members from Michigan released a letter calling on Whitmer to amend her order, accusing her of "needlessly shutting down large sectors of the economy and further restricting the lives of residents." Announcing their plan to defy Whitmer's shelter-in-place orders, four Michigan sheriffs argued the governor was "overstepping her executive authority." Republican National Committee chair Ronna McDaniel tweeted that Whitmer was turning Michigan into a "police state."

"Gretchen, stop auditioning for VP & do your job," she said.

On Tuesday, more than 100 protesters in Raleigh, North Carolina, came together to oppose Democratic Gov. Roy Cooper's stay-at-home order. The protest was organized through a private Facebook group named #ReOpenNC started by a stay-at-home mother who told the Raleigh News & Observer that she is "against mandatory vaccination." The group said it plans to hold weekly rallies, a promise also made by the 100-plus protesters who interrupted Ohio Gov. Mike DeWine, a Republican, on Monday.

Will be forever haunted by this image of protestors in Ohio demanding the governor open businesses back up pic.twitter.com/P0nivaYSsY

So who is behind the sudden sprouting of right-wing resistance? Unlike with the Tea Party movement of the recent past, the mega-donors behind today's right-wing rallies are making no effort to hide their involvement.

FreedomWorks, the instrumental force behind the Tea Party, "is holding weekly virtual town halls with members of Congress, igniting an activist base of thousands of supporters across the nation to back up the effort" led by right-wing commentator Stephen Moore. the Associated Press reported. Other right-wing groups vocally opposing shutdowns include Americans for Prosperity, an organization funded by the Koch brothers, and the conservative Heritage Foundation.

There is even a connection to the family of Trump's Secretary of Education, Betsy DeVos. As Michigan's governor noted, the DeVos family foundation helped fund Facebook ads for this week's protest. While noting that the Education Secretary ended her political spending when she joined Trump's Cabinet, a spokesperson for the family took a swipe at Whitmer. "They understand the frustration of fellow Michiganders, however, as elements of the governor's top-down approach appear to go beyond public safety," Nick Wasmiller told MLive, adding that "Michigan deserves competent governance."

Trump's acting director of national intelligence, Richard Grenell, posted an image to social media on Wednesday suggesting that stay-at-home orders were unconstitutional. That same day, Sen. John Kennedy, R-La., told Fox News' Tucker Carlson, "We've gotta reopen, and when we do the coronavirus is gonna spread faster." Rep. Trey Hollingsworth told an Indianapolis radio station on Wednesday that it was time for lawmakers to put on their "big-boy and big-girl pants" and prioritize "the American way of life" over the lives of actual Americans. "It is not zero evil, but it is the lesser of these two evils," Hollingsworth said, "and we intend to move forward that direction."

It's clear these small groups of protesters share more than a sense of irritability with being inconvenienced. After all, protesters have been beaten, strikers have been shot, and freedom of assembly has been infringed plenty of times in the past — and those crackdowns have been loudly applauded by the same right-wing, pro-capital protesters now complaining about social distancing guidelines. Recall that after Trump's election, Republican state legislatures rushed to pass laws restricting the right to protest. In Arizona, where right-wing protests against shelter-in-place orders are scheduled for this weekend, Republicans tried to pass a bill allowing police to arrest anyone involved in a nonviolent demonstration. Now the same people who rally around a "back the blue" campaign whenever police shoot an unarmed black person or when anti-fascists take to the streets are righteously exercised about civil liberties.

"Are you goons of [Gov.] Cooper or servants of the people?" one North Carolina protester reportedly yelled at law enforcement officers this week.

This redirected right-wing rage comes as Trump continues to change direction, hoping to find a pandemic response that makes him look like a leader. Whether this so-called protest movement is orchestrated by his campaign or not — and that seems highly plausible — ultimately it's a PR stunt conducted on his behalf, meant to avoid a grim new reality as the bodies pile up.