Donald Trump's weird tales: His call to "liberate Virginia" is even worse than you think

Trump's call to "liberate Virginia" from gun safety echoes one of the craziest, nastiest lies of his presidency 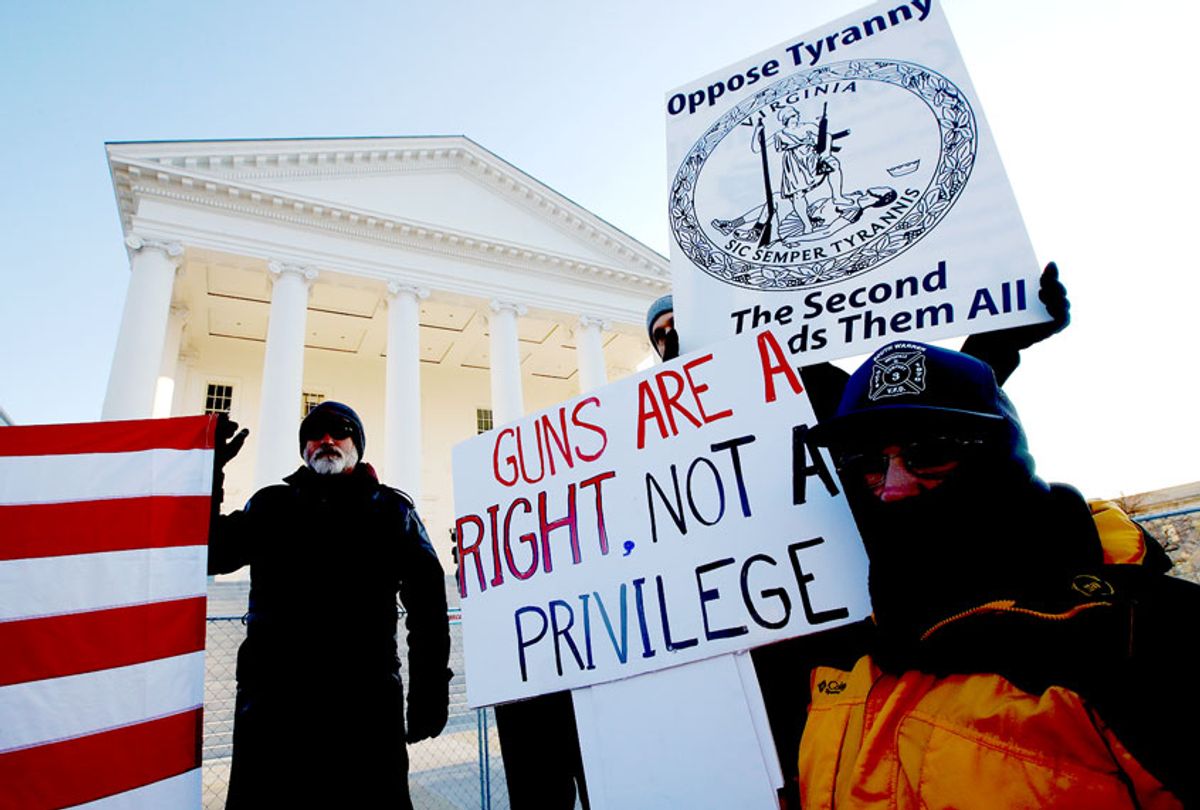 The governor of Virginia, Ralph Northam, is back on Donald Trump's grievance radar. This time it's for supporting a series of common sense gun safety proposals working their way through the newly Democratic-controlled legislature in Richmond.

By way of background, you might recall how the commonwealth's governor was previously attacked by Trump after Northam bungled a remark regarding hospice or palliative care for infants born with catastrophic, terminal diseases and birth defects.

Trump, always fascinated by grisly storytelling and always drawn to concoct outrageous lies, framed what Northam had said as though the governor, as well as Democrats at large, wanted to allow parents to randomly and electively murder their newborn babies. The way Trump continues to describe it in his rallies and on Twitter is that Democrats are fine with parents bringing their perfectly healthy children home from hospitals, placing them in cribs and then killing them somehow, just because, we assume, the parents have decided — whoops! — they didn't want children after all, you know, after nine months of expense, physical discomfort and existential stress.

Obviously Democrats are proposing nothing of the kind, and have never proposed anything close to that psychotic delusion, which could only have emerged, like an "Alien" chest-burster in language form, from Trump's tormented and sociopathic brain. The law he's describing actually allows for humane intervention, when it comes to terminally ill newborn infants. Democrats merely want to ensure parents can decide to forgo extreme life-preserving medical techniques in order to spare terminally ill newborns who may be in severe pain. Northam, despite his fumbled language, was simply saying that parents can authorize palliative care for their newborn infants who are clearly going to die. That's it.

But Trump thinks, or claims to think, that this is all about murdering children — infanticide — which is illegal and will remain illegal forever.

Of course, it doesn't take much for Trump to careen into weird or morbid tangents he barely understands. All it takes is for someone on Fox News or its even loopier baby cousin, OANN, to say something that catches Trump's attention. Trump then steals the idea and runs with it, as if it were his own. Such was the case with Northam and the "murder children in their cribs" crapola. And, of course, the Fox News disinformation machine also triggered the president's recent rants about "liberating" Virginia from the mean Democrats who apparently want to murder infants, keep you locked in your houses for no reason and take away everyone's guns.

None of that is true, no matter how often Trump veers off into his awkward tall tales.

First, it's important to note that there aren't any confiscation laws in the package. No one's taking any guns away from law-abiding citizens. Six of the following gun bills were passed, while one is still in progress — a bill that also happens to include a rule that was already passed at the federal level by a gun-grabbing liberal named Donald Trump.

Assault weapons and bump stock ban The broadest of the Virginia bills, and one that hasn't passed yet, bans the sale of assault weapons, extended magazines and bump stocks. While Trump hasn't proposed banning military-style semi-automatic rifles, he certainly authorized a rule in 2018 not only banning the sale of bump stocks, which are now illegal per federal law, but mandating that existing bump stock owners destroy the deadly accessories or turn them over to the federal government. Trump seldom mentions this one. I wonder why.

It may be germane to note here that prior to the 2017 Las Vegas massacre involving the use of a bump stock, a spokesman for the manufacturer described the accessory as allowing gunmen to "spray [rounds] like a fire hose." Four hundred and thirteen people were shot, and 59 died, in Las Vegas — thanks to a bump stock, which allowed the perpetrator to squeeze off 1,049 rounds within 11 minutes.

Meanwhile, the following proposals were signed into law by Northam on April 10.

Background checks Among the slate of six laws passed is a universal background checks bill, one that includes checks on private and internet sales — a concept that enjoys super-majority support nationwide, across all party affiliations. The most recent Quinnipiac poll, from September 2019, showed 71 percent support for expanded background checks among Republican voters, 96 percent support among Democrats and 85 percent among independents. If this is among Trump's "liberation" grievances, I'm not sure who he's liberating. Most of his voters evidently support it.

Guns and kids Virginia Democrats passed and Northam signed House Bill 1083, a law that stiffens the penalty for leaving unsecured loaded weapons within reach of children. Northam suggests upping the charge from a "Class 3 Misdemeanor to a Class 6 felony." I'm not sure why Trump wants gun owners to get off with a lighter penalty for being this brutally irresponsible with their firearms, but clearly he's OK with kids accidentally shooting themselves or their family-members — which is jarring, given his loop-tape rant about murdering babies in their cribs. According to Children's Hospital, one out of every three homes with children has firearms present, and 89 percent of children who are shot and killed each year are shot accidentally at home. States with Child Access Prevention (CAP) laws have a significantly reduced rate of children being shot in their homes. Trump's against this, apparently.

Child and spousal abusers Trump's also against keeping firearms out of the hands of domestic abusers subject to "final protection orders" — protection orders issued after a jury trial. Trump and his gun-fetish fanboys might be interested to know that a similar law already exists in Virginia, and Northam's amendment merely strengthens it. What we're talking about here is banning child and spousal abusers from owning deadly weapons, for obvious reasons. If you think that's unreasonable, as Trump clearly does, you might be an abuser yourself, or your moral compass might be irreparably busted.

"Extreme Risk Protective Orders" Similarly, another law, signed by Northam, temporarily disallows people from retaining firearms who are deemed by a judge to be immediately dangerous to themselves and others, creating a new category of protection order known as an "Extreme Risk Protection Order." An ABC News and Washington Post poll last year indicated that 86 percent of Americans support similar laws, while only 12 percent are opposed. Again, there's no logical reason to be against such a thing, especially given that background checks, which have super-majority support across all parties, weed out similar kinds of people. I mean, what's the point of background checks, if not to keep firearms away from violent people?

One per month and lost guns. On top of all that, Northam signed a law to restrict gun purchases to one per month, which also seems entirely reasonable. In fact, one per year seems even more reasonable unless you're stockpiling in preparation for doing something awful. Nevertheless, Northam's sticking with every 30 days, or around 12 gun purchases per year (for some reason). Additionally, another law requires gun owners to report lost or stolen firearms to law enforcement.

All told, none of this requires "liberation," as Trump continues to screech. But reality isn't driving Trump's twitchy freakouts or the astroturf protests this week, many of which feature masked gun owners carrying semiautomatic weapons on public land — unrestricted by law enforcement, by the way. Pure Trump-fueled fiction, along with crackpot far-right interests, are driving the protests, and we can expect around 10 percent of the protesters to parade into hospitals within a couple weeks, stricken with COVID-19.

If these gullible, erratic cultists thought about what they were doing for just one second, they'd realize they're not only risking potentially deadly infections themselves, easily transmitted to their families, but also that it's largely Trump's fault the Democrats took over the Virginia statehouse in the first place. If Trump hadn't been so unforgivably incompetent and corrupt out of the gate, the negative partisanship that drove the various special- and midterm blue waves might not have delivered Virginia to the Democrats.

Besides, I've yet to hear from a single protester who believes his or her rights are being taken away by Ralph Northam, or anyone else, elaborate on Trump's declaration that he possesses "total power" over the states. This brand of explicit totalitarianism — Trump said it repeatedly out loud on national television — is evidently fine and dandy, but keeping guns away from child abusers is a liberation-worthy trespass against our constitutional liberties. Only among Trump's cult of suckers does any of this make a lick of sense.