How do workers organize when we can’t go to work?

History tells us that even in times of little work, there are ways to fight back against exploitation 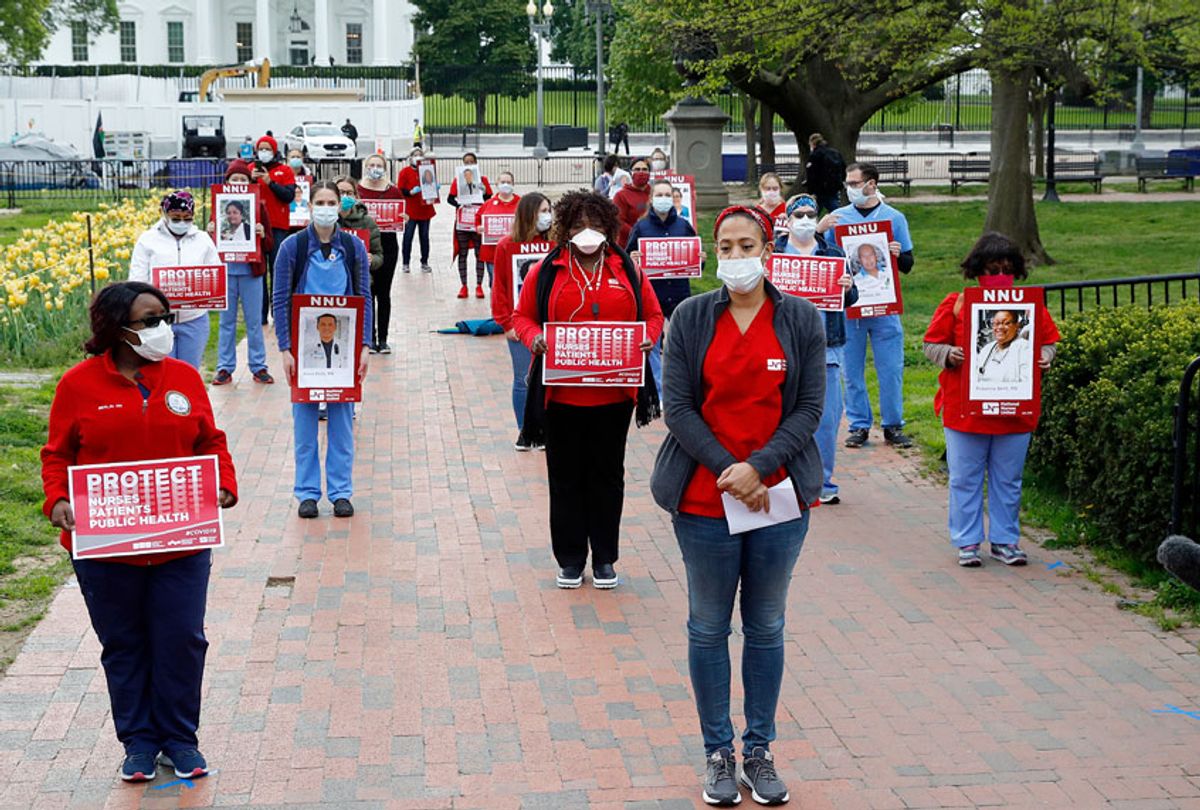 The economist Joan Robinson once wrote, "the misery of being exploited by capitalists is nothing compared to not being exploited at all." Certainly, it's miserable to wear yourself out at work just to line your boss's pockets. But it's even worse to lose your job, and be left wondering how you'll pay rent and put dinner on the table.

Indeed, we're now seeing over 26 million unemployed claims in the US as a consequence of the pandemic, and the numbers keep climbing. These numbers are staggering in terms of the scale of misery they represent. But they also pose a major political problem.

Organizing at the workplace is central to the labor movement, and this isn't just because people spend most of their waking hours at work. It's also because exploiting labor is the basis of capitalist profits. Chris Smalls, who was fired by Amazon for organizing a walkout against unsafe working conditions, put it very clearly in his open letter to Jeff Bezos: "You think you're powerful? We're the ones that have the power. Without us working, what are you going to do? You'll have no money. We have the power. We make money for you. Never forget that."

But there's another reason that for much of the history of the labor movement, organizing people at work had a very meaningful political content. It was also the place where workers could build a different kind of power. By taking over the production process, they could build new, democratic forms of life that were an alternative to capitalism.

In the early 20th century, German and Dutch "council communists" like the radical astronomer Anton Pannekoek argued that the directly democratic workers' councils which had sprung up spontaneously amid the Russian and German revolutions represented a form of organizing that was far more democratic than political parties. What's more, they thought that these councils demonstrated the possibility of workers' "self-management" of production: that is, workers could run the production process themselves, without bosses to control them.

In 1947, the socialist writers C.L.R. James, Grace Lee Boggs, and Raya Dunayevskaya argued that the mass strikes that had led to the formation of the C.I.O. [Congress of Industrial Organizations] during the Great Depression represented an "invading socialist society" that already existed on the factory floor, within and against capitalism.

But the situation changed quickly, as Grace Lee Boggs's husband, Detroit autoworker James Boggs, would describe in 1963 in "The American Revolution." After the Second World War and the rapid economic development that followed, the bulk of the population moved from unionized manufacturing jobs to unorganized service jobs, and automation rendered superfluous much of the labor usually performed by society. A growing mass of unemployed people forced the state to introduce welfare programs to prevent civil unrest, but it still tried to avoid paying for people's survival as much as it could.

Prophetically, Boggs predicted that American society would see a stark polarization, with some people cast aside as "expendables," "surplus people," "displaced persons." Out of this polarization would emerge "a counter-revolutionary movement made up of those from all social layers who resent the continued cost to them of maintaining these expendables but who are determined to maintain the system that creates and multiplies the number of expendables."

The response, Boggs pointed out, would have to be a mobilization of "those who begin by recognizing the right of these displaced persons to live, and from there are forced to struggle for a society in which there are no displaced persons."

For Boggs, this meant going beyond the classical workplace-centered framework. The fact that so much labor was becoming superfluous, he argued, was bringing us to a stage "where work in the factory is also no longer going to be socially necessary for the great majority."

Unemployment and poverty now existed alongside a technological capacity for unprecedented abundance. At this stage, Boggs asked: "Why then should people keep looking for work in order to justify their right to live if there is no longer a social and economic need for them to work?" Why should we continue to tie 'the right to live' to "the ability to produce"?

Instead of seeking control over production, the new movement for the classless society would have to seek to liberate people from work.

This has become painfully clear today as "non-essential" work is shutting down. The small proportion of "essential" work is being transferred onto the most vulnerable and impoverished parts of our population, which society is obscenely exposing to hazardous conditions and treating as "expendable." This is the ugly reality of the "right to work" demonstrations cultivated by Trump.

Meanwhile, many people are losing access to what they need to survive because they can't work — precisely and paradoxically because their jobs have been determined to be "non-essential."

The problem, though, is how do you organize when you've lost the basis for the democratic vision of the workers' councils? C.L.R. James rejected Boggs's analysis for precisely this reason: it meant abandoning the organizational form that was supposed to represent the invading socialist society.

But for alternative ideas we can actually look to the Great Depression, before and alongside the spectacular examples of workplace organizing that yielded the C.I.O. Considering the scale of the economic crisis we're entering into now, studying the 1930s is going to be very useful.

As Geoff Eley points out in his outstanding history of European socialism, "Forging Democracy," in 1929 eighty percent of the members of the German Communist Party (KPD) were unemployed. It's hard to center your politics on workers' councils in that situation. Today, many remember the KPD in a negative light, for the party's sectarian unwillingness to form coalitions against fascism. Still, we also have to appreciate how it dealt with this organizational crisis by launching major movements for gender equality, establishing sexual health clinics and campaigning for the right to abortion and access to birth control.

According to historian Atina Grossman's "Reforming Sex," "it was the organization and resources of the KPD that made sex reform issues public as never before." Being able to safely and legally prevent or terminate pregnancy was crucial for women who found themselves unemployed or underpaid, burdened with increasing domestic responsibilities as public programs of childcare or school lunch were cut.

"With its analysis of women's dual oppression in production and reproduction," Grossman writes, "the KPD recognized that a woman's ability to control her own body was at least as crucial to her active participation in the class struggle as was her integration into the social process of production."

Despite the fact that leftists were frequently wary of alienating the public with the issue of abortion, Grossman points out that the KPD's campaign actually "successfully attracted and mobilized masses of usually skeptical women."

The Communist Party USA centered the struggle against racism: they sent cadres to the South to organize sharecropper's unions and armed defense against lynching; in the urban North, they organized the unemployed and focused on issues outside the workplace, most notably tenants' struggles and rent strikes.

This movement was the biggest in the Bronx, Naison adds, where hundreds and in certain cases thousands of people showed up to prevent the police from taking the furniture. The campaign was followed by Communist-organized rent strikes, which by 1932 "had spread throughout the Bronx so much that landlords were terrified they would no longer be able to run private housing in a profitable manner."

In Alabama, as historian Robin D.G. Kelley recounts, representatives of the unemployed councils stepped in to meet people's needs: "if the water was turned off, communists would figure out a way to turn the water back on. Or if the electricity was turned off, they used jumper cables to run electricity. Or, if someone got evicted from their home, the communists, as a group, would go to the landlord and say, look you have a choice, you need to put that guy or that family back into their house or the next day your house may turn into firewood."

These practices were crucial ways of drawing members to the Communist Parties and demonstrating to the public that the party was concerned with the issues that mattered in their daily lives.

As these examples show, there's no incompatibility between organizing at the workplace and organizing within communities and neighborhoods. This is all part of the rich and varied legacy of the labor movement, and we need to carry that spirit of creativity and experimentation into the present.

The classic lessons of strikes and self-management are still valid and necessary. Labor journalist Sarah Jaffe recently asked: "what if nurses ran the healthcare system?" As she reports, healthcare workers who are on the ground understand the challenges and necessities of fighting the pandemic in a way that management actively tries to obstruct and suppress.

This kind of workplace organizing has to be supplemented with organizing in everyday life. Fortunately, we're seeing efforts to do just that, with calls for a rent strike on May Day and self-organized distribution of groceries and hygienic supplies. Initiatives to defend immigrants from the xenophobic actions of the far right, and to protect access to abortion in conservative states, are just as necessary.

By bridging between the workplace and everyday life, we can start to address the challenge that is posed by unemployment. But even more than that, we can aim at a vision of a society in which our right to live isn't tied to our ability to produce, and in which we cooperate to meet our needs and face the challenges the planet throws at us.