"Your dog loves you for who you are, not who you need to be," says Jennifer Finney Boylan 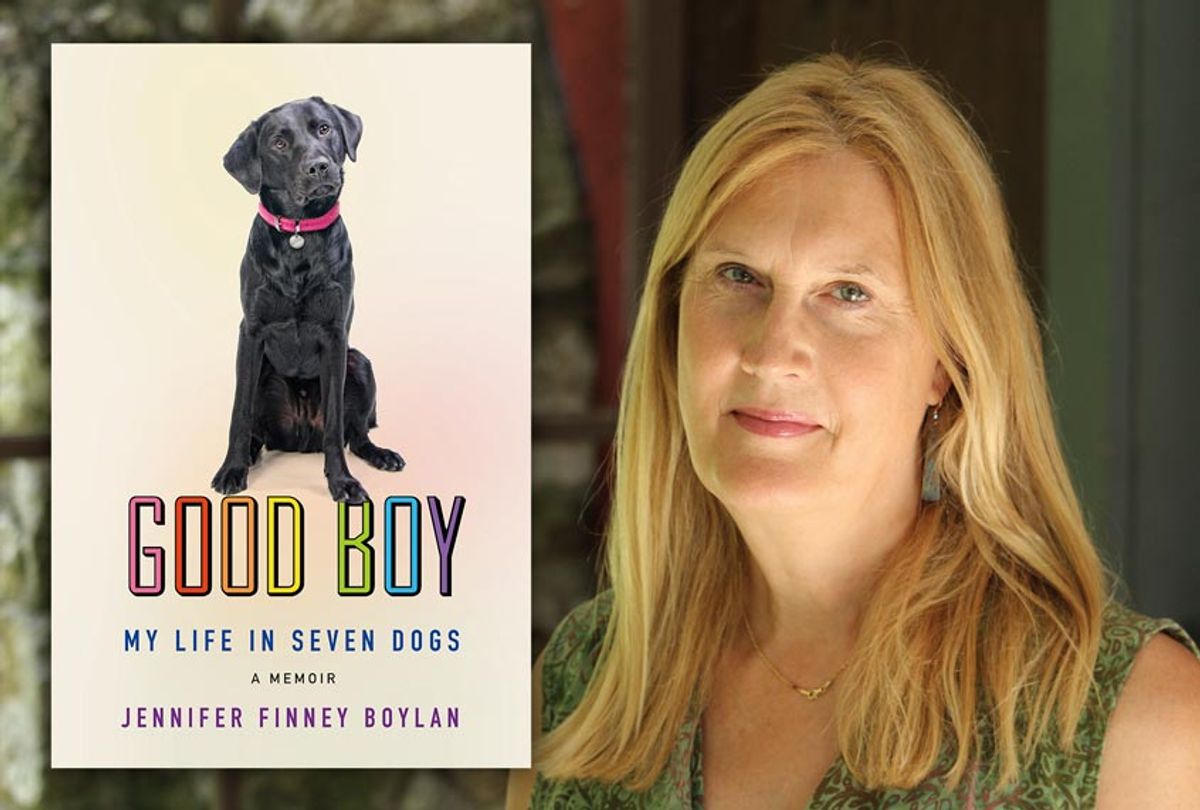 As a child, Jennifer Finney Boylan faced the challenges of coming into a "boyhood," as she describes it. Later in life, as a woman, she reflected on her younger self feeling disconnected from the child she had once been decades ago. "I had never regretted coming out as trans, living in the world without shame or secrets," Boylan writes in her new memoir, "Good Boy: My Life in Seven Dogs." "But there were times when I remembered my younger self the way you'd remember a dear friend you'd lost, for reasons you no longer quite understood."

"Good Boy" is Boylan's journey to better understanding the boy she once was — not through the lens of major events in her life pre-transition, but through her dogs. "This is a book about dogs: the love we have for them and the way that love helps us understand the people we have been," Boylan writes. "This is a book about men and boys, written by a woman who remembers the world in which they live and the way an emigrant might, late in life, recall the distant country of her birth."

Salon spoke with Boylan about her new book, and what dogs teach us about gender, love, loss and ourselves. As always, this interview has been edited and condensed for clarity.

The book stems from an article you wrote about your dog Indigo, which went viral in 2017. What made you want to expand on this idea of learning about yourself through the lens of your dogs? You've also written about how other external factors have taught you about your transgender and queer identity, like your New Yorker piece on Peanuts.

Well, I've become one of the go-to people to talk about transgender issues over the last decade or two, and I've been glad to do that but I don't always want to just tell a transition story. I want to write about men and women, and what makes them tick. And it occurred to me when you write about dogs, you're talking about love, and you're talking about loss. Love, because dogs allow people — men in particular — to express emotions that they might not have a language for; Loss, because to have a dog means to experience a very intense relationship, but also this is a relationship that doesn't last forever. If you're lucky 10 years, plus or minus. In this way, it struck me that writing about dogs was a good way of framing these issues.

Yeah, well it's funny. My father, in some ways, was a very gentle man, but he was also a man who kept emotions close to the vest. He was not a person who expressed love or grief with a lot of ease, like most men of his generation, He was a very kind of Don Draper kind of guy. But, I remember watching a television show about a dog that had died and turning around and seeing my father in tears. And what a profound moment that was for me, knowing that my father was able to express this kind of profound sorrow that he was not able to express it in any other moment in any other way.

I learned something different from each of the dogs that I've had. With Playboy, I learned that in some ways it's okay if everyone hates you, as long as you're really, deeply loved by one person. From my dog Sausage, who I loved when I was 12, but by the time I was 16 I thought she was just completely uncool, stupid. She was a dog of a nerd. And I was no longer a nerd. So from Sausage I learned that sometimes love fades, and it can be hard to keep a promise at one age that you made at another. And then, you know, my sister had this terrible dog who would you know just hump anything, including my grandmother's leg. My grandmother always thought it was very funny and would shout things like, "He's got more spunk than your grandpa."

Yeah, I just remembered that the other day I don't think that line is actually in the book, so I'm gonna give that to you.

I learned that sometimes the happiest people are the ones that make everyone else's life impossible. So I mean, I could go through all seven of these dogs in the book, but each one taught me something a little bit different about love, and about loss and, how that spoke to the boy or the man that I was trying to be at various moments in my life. It's kind of like if you were to think back about all your boyfriends or girlfriends. Over the course of your life, it would it would make for an interesting Menagerie, but it would also remind you who you were at those moments. And in a way, I guess, I think of dogs in the same way.

I love dogs. I'm familiar with the intimate relationship that we have with dogs and how special they are. I have a dog and she's my whole world. Going back to your example with your dad, why do you think it can be almost easier at times for humans to be vulnerable with a dog than maybe it is with other humans?

I don't know. It's like you have a get out of jail free pass with dogs. You can blubber over a dog. You can cry over a dog. It's just different rules. It's almost as if these relationships take place on the unconscious level.

Totally. The book is structured around the dogs you've had pre-transition and the kind of pivotal moments of your childhood and early adult life. Can share more about the decision to structure the book like that?

It wasn't a difficult decision. I wanted to write about different moments in my life. And so I tried to think of the way in which different moments in my life were really frozen in time by moments that I shared with those dogs. There's your public self and there's your private self and your dog. Your dog really knows your private self, in some ways, and if you're a transgender person, so much of who you feel yourself to be, at least if you're a person like me who came out fairly late in life, is hidden. So it's kind of like the only person who knew who I was for the first 40 years of my life were these dogs.

Was it obvious to you that these dogs had these meaningful lessons to teach you as a kid?

Oh no, not at all. It was not obvious to me. The way I work is I sketch out a project without really knowing where I'm going. And then I kind of look at it, and I think okay well what is this? And then I read it again. And then I read it again and again. I'm kind of a furious rewriter, which maybe means that in the end it takes me longer to get anything done, than it would be if I had planned it all out in advance, but I find that I don't really understand the story that I'm trying to tell until I've actually told it, thought about it, revised and, and the stories that I tried to tell come out of that process.

So what I knew from the beginning was that I wanted to write about dogs because I love them. And it occurred to me that I've had like nine or 10 dogs in my life and it struck me that there are a lot of stories. I mean if you ask people about their dogs you're gonna start hearing stories, it's an easy party trick to ask people about their pets. And when you hear the stories, it doesn't take very long before you realize they're not really talking about their dogs, they're talking about themselves. So, that's what I figured I'd start writing the stories, and then see what emerged, and then what emerged over time was, in fact, a portrait of boys and of men, and that struck me is really interesting so that's what I wanted to kind of dig down on when I began the revisions and let the real story come up.

One big theme in the book is acceptance. Can you share with our readers how you think they can accept themselves, by taking a page from our canine friends?

Well, your dog loves you for who you are. What's that song? It's a Sly & The Family Stone song, "Everybody is a Star." The lyrics are: "I love you for who you are, not the one you feel you need to be." Your dog loves you for who you are. I have a number of relationships, well, not many, but some that never really recovered from my transition. I transitioned when I was 40. Now I'm 61. And there are some relationships that have never recovered. They're people who just couldn't make the leap with me, and other people who only now, almost 20 years later, we're repairing the damage in the relationship that took place in 2000.

And yet, meanwhile, I came down the stairs [in heels], before my public transition, and my dog Lucy — who was, you know, kind of a resentful smart-aleck of a dog — she looked at me for a second, and then she was like, "Oh, it's you, right." And so it took Lucy about five seconds. And for some human beings it's taken 20 years.

So, I mean, I wonder about that. Why is it that there's some things that are so obvious to dogs that are so elusive, and unknowable to human beings? And we're supposed to be so much smarter than our dogs, and yet our dogs can be more emotionally intelligent. All your dog wants is to be loved by you. In some ways the task of life is not that complicated: love other people, and allow yourself to be loved. Does it really need to be more complicated than that?