Did Nancy Pelosi make a tactical error with McConnell? "Just calm down," she says

Could Democrats have gotten more from Mitch? "It's no use going on to what might have been," says speaker 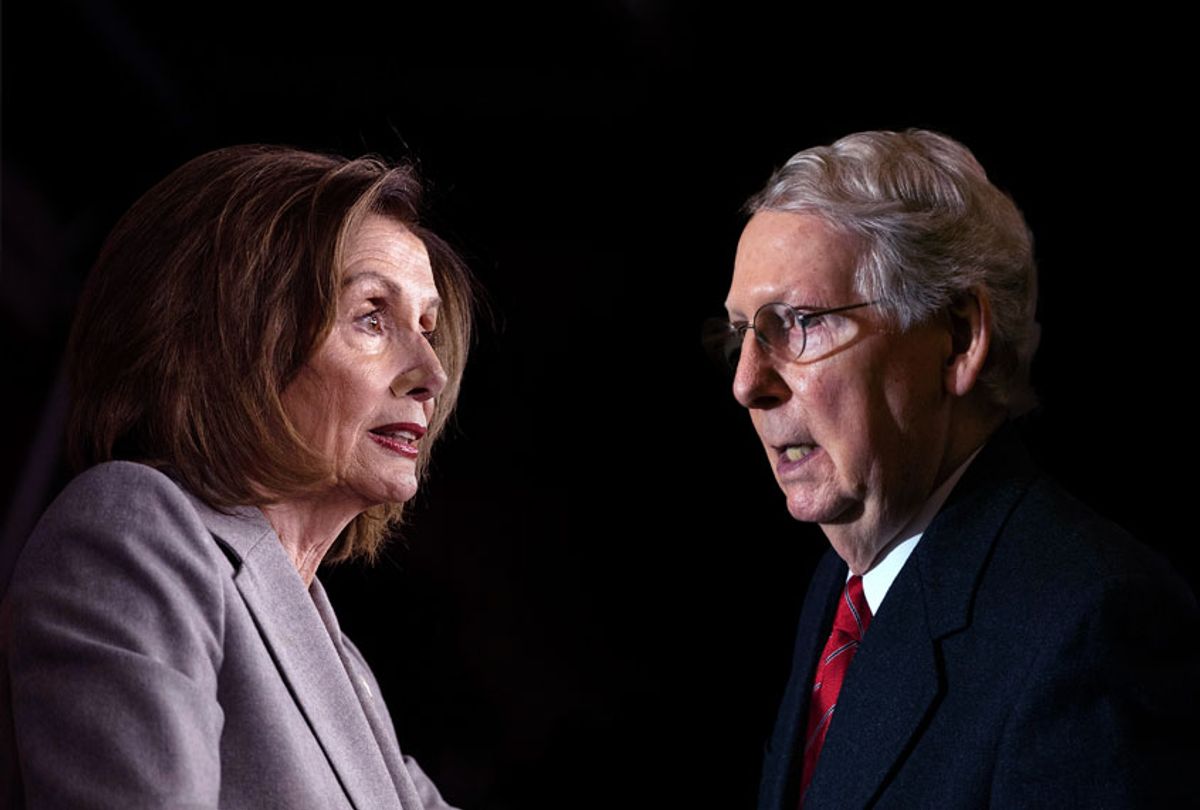 Amid growing criticism from progressives and increased anxiety among the nation's working families, small business owners and local and state governments that economic relief from the coronavirus pandemic will come too late and be too little, House Speaker Nancy Pelosi on Sunday told television viewers to "just calm down" when asked if she had erred in her legislative strategy with the Trump White House and Senate Majority Leader Mitch McConnell.

Asked by CNN's Jake Tapper on "State of the Union" if she had made a "tactical mistake" by allowing an "interim" piece of coronavirus relief package — known as COVID 3.5 — to pass last week without much stronger support for state and local governments, Pelosi deflected on the premise.

"Just calm down," Pelosi said. "We will have state and local and we will have it in a significant way. It's no use going on to what might have been."

Pelosi argued that Democrats "made the most of" the interim package — moving McConnell to a large expansion of the Paycheck Protection Program (PPP) for small businesses — but promised once again that a larger package was on its way.

Pelosi said local and state lawmakers, including New York Gov. Andrew Cuomo, are right to be frustrated in terms of lack of emergency funding for local governments. "They should be impatient," Pelosi said, "and their impatience will help us" get a bigger package and more funding in the Democrats' CARES 2 package, now being drawn up in the House.

While McConnell was pilloried last week for suggesting that states should be sent to bankruptcy as opposed to receiving funds, Democrats have said a large aid package to state and local governments will be a key part of their CARES 2 legislation.

As Common Dreams reported Friday in the wake of President Trump signing the COVID 3.5 bill into law, progressive advocates said the Democrats' repeated kicking of the can down the road is no longer acceptable.

"'Just wait until the next bill' is not good enough anymore," Morris Pearl, chair of the Patriotic Millionaires, said in a statement. "If these are truly legislative priorities for members of Congress, as they should be, they need to start fighting for them."

In a letter (pdf) to Pelosi and Senate Minority Chuck Schumer at the end of last week, nearly 50 progressive advocacy groups said that as Republicans attempt to exploit the coronavirus crisis to "further enrich their already-wealthy donors, and undermine democracy," Democrats "must put forth and fight for a relief package that puts people first."

"We need Democrats to be bold and fearless in fighting for our families and our communities, advancing solutions that are commensurate with the scale of the crisis we face and helping us build toward a better future for ​our people, our economy and our democracy," the groups wrote.