Eric wants you to stock up on "quarantine wine" from Trump Winery, which his dad's immigration ban didn't impact 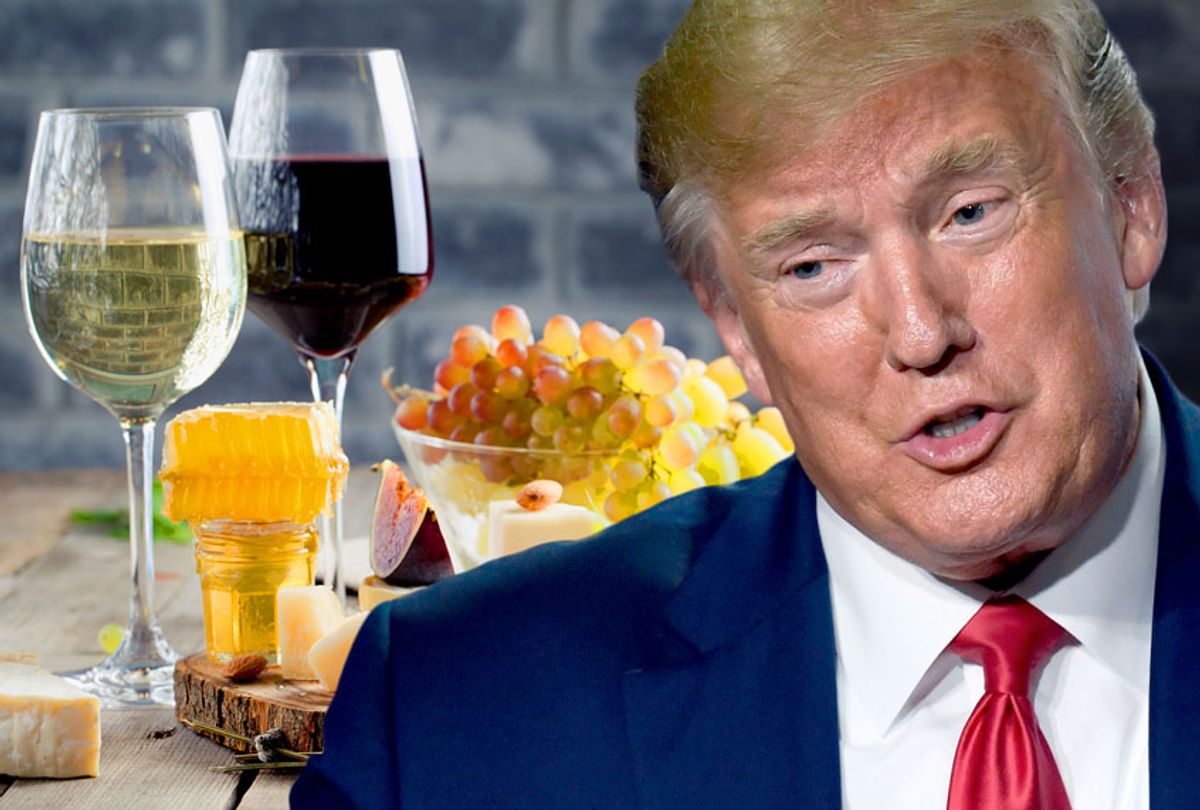 On the same day that President Donald Trump ordered a temporary halt on some green cards, his second son promoted Trump-branded "quarantine wine" on social media.

Though he initially vowed to "temporarily suspend" all immigration to the country, the president ultimately signed a more limited order. The ban did not suspend the visas for agricultural workers from which Trump Vineyards benefits.

"The team at @TrumpWinery has you covered if your quarantine wine supply is running low! Check us out," Eric Trump wrote on Twitter. His tweet featured a bottle of Trump rosé in front of a bouquet of roses.

According to its 2017 visa application, Trump Vineyards, which the president owns, pays legal migrant laborers $0.15 per vine pruned under H2-A visas granted annually by his own administration.

Several of the president's businesses have closed since shutdowns began in earnest last month, and his private company, the Trump Organization, even asked his own administration for a break on rent payments to its Washington hotel amid the coronavirus pandemic.

"Just treat us the same," Eric told The New York Times. "Whatever that may be is fine."

Trump Vineyards is eligible to access a $9.5 billion agricultural federal relief fund during the pandemic, which has a carveout for grapes, though the company told the Associated Press that it did not plan to apply.

Neither the Trump Org. nor Trump Winery immediately replied to Salon's requests for comment.

The president, whose brother died of alcoholism, is a notorious teetotaler who "doesn't like drinkers." He bought the winery's Charlottesville property for pennies on the dollar in 2011. Though he owns the vineyard that supplies the winery, he does not own the winery itself, which he gave to Eric as a pet project. He appears to even charge his son rent, according to financial documents.

This highlights what appears to be purposely constructed confusion between what the president does and does not own. The work visas are granted to a company called Trump Vineyard Estates LLC, which President Trump (Trump Org.) owns — not Trump Winery.

The Trumps maintain that the president is not associated with the winery, whose website carries this disclaimer on its legal page: "Trump Winery is a registered trade name of Eric Trump Wine Manufacturing LLC, which is not owned, managed, or affiliated with Donald J. Trump or any of his affiliates."

However, one of the president's business affiliates is his son, Eric, and the winery's website was built by Trump 2020 campaign manager Brad Parscale. The winery also boasts a luxury hotel, and online bookings link out to the winery's page on the Trump Org. site, which does not include the same ownership disclaimer.

Though the president initially said he would not access any Trump Org. funds during his administration, he quietly changed his Trump Organization contract a month after his inauguration, which allowed him to withdraw money at any time without disclosure.

The Trump administration has granted Trump's vineyard business dozens of hard-to-get migrant laborer visas over the past three years, which helped the president profit off of the backs of about 30 non-American workers. He has also increased H-2B visas, which benefit many of his other properties, while increasingly rejecting visas for skilled technology workers.

The vineyard reportedly knowingly and continually uses undocumented laborers. According to an audio recording obtained last year by the Washington Post, the operation waited until the harvest and the grueling pruning season had passed to fire a group of undocumented laborers — a year after the Trump Org. vowed to crack down on illegal labor at its businesses.

"So when we looked at your forms and documents, some of the documentation did not seem genuine or was insufficient," Kerry Woolard, the winery's general manager, told one employee, whose name Eric had drawn to in a $500 raffle weeks before. "Do you currently have legal permission to work in the United States?"

"No," the worker replied.

"So, unfortunately, this means we have to end our employment relationship today," Woolard told him. "We're very sad. You've been wonderful. If your employment status ever changes, you're welcome back, of course."

Eric also used the occasion of his father's impeachment to promote his wine.

Following former Ambassador Gordon Sondland's revised testimony in November, which accused the president of arranging a quid pro quo with Ukrainian government, Eric tweeted, "It's a perfect day for a nice bottle of this. These people are — insane….."