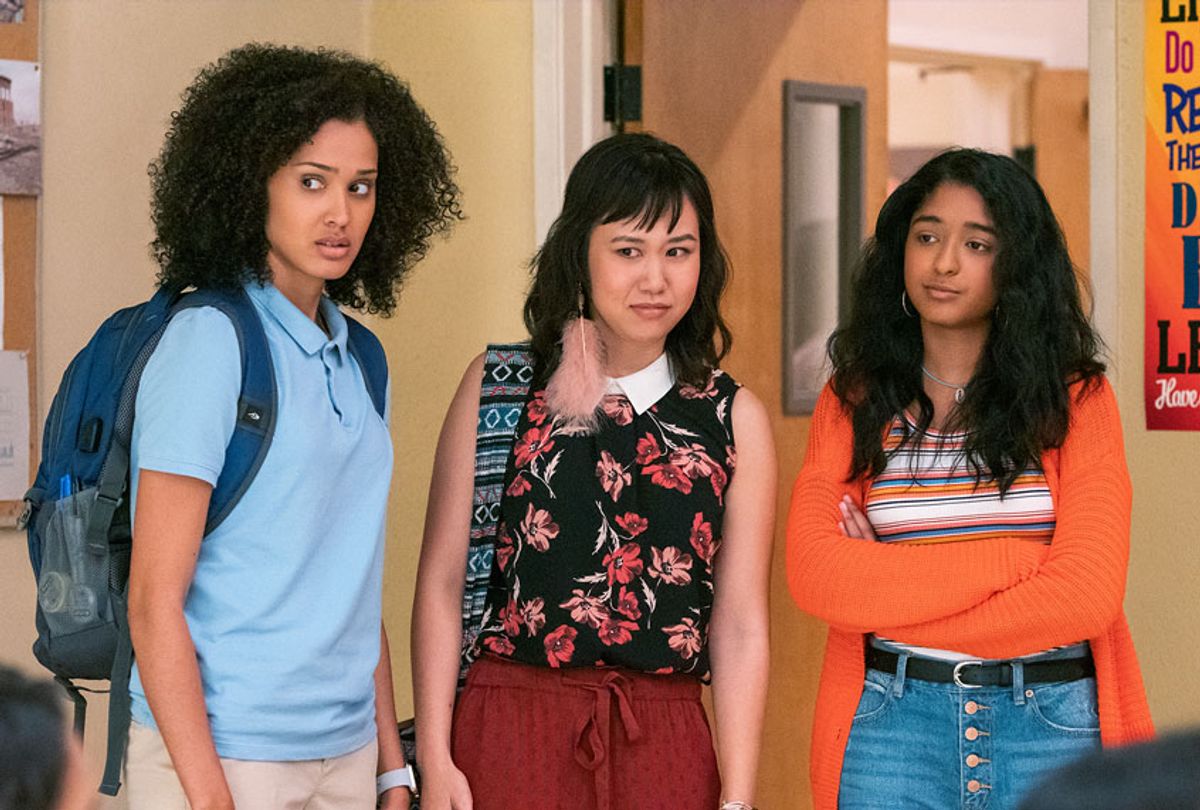 Lee Rodriguez as Fabiola Torres, Ramona Young as Eleanor Wong, and Maitreyi Ramakrishnan as Devi Vishwakumar in "Never Have I Ever" (LARA SOLANKI/NETFLIX)
--

Mindy Kaling is obsessed with romantic comedy films, and frankly the world is better off for it. As a producer, writer and star who first paid homage to the genre in her long-running Fox (then Hulu) comedy "The Mindy Project," Kaling demonstratively has enough respect for romantic comedies to imitate the traits that make them classics of a kind. At the same time, however, she lovingly skewers all the unrealistic expectations these movies seed in actual men and women, and boys and girls, who watch them.

This makes her new Netflix comedy "Never Have I Ever" a familiar and yet fresh and much-needed revelation, in that it centers the very people generally sidelined in such movies. I can only think of a few films that achieve something similar, and do it as well, 2019's "Booksmart" being one of them. But even that doesn't feature a cast mostly composed of non-white performers or a young woman of Indian descent as its romantic lead.

With "Never Have I Ever," Kaling delves into awkward teenage years by way of the very awkward 15-year-old Devi Vishwakumar (Maitreyi Ramakrishnan), a teen being raised by a very strict mother, Nalini (Poorna Jagannathan), and constantly compared to her ravishing cousin Kamala (Richa Moorjani).

Devi is a nerd through and through, a high-achieving, chronically unfashionable brainiac flanked by her loving but similarly socially challenged best friends Fabiola (Lee Rodriguez) and Eleanor (Ramona Young). Together the trio exists in a social bubble, generally invisible save for Devi spontaneously losing the use of her legs for three months following the sudden death of her father Mohan (Sendhil Ramamurthy).

Not even this psychosomatic ailment gains her much sympathy or friendly understanding at school, least of all from her academic rival Ben Gross (Jaren Lewison). As they enter sophomore year Devi is determined that she and her friends are going to improve their odds by hooking up. This becomes particularly crucial once Devi sets her sights on swim team stud Paxton Hall-Yoshida (Darren Barnet), especially given that her desire to gaze upon him a few months before the first day of the new school year leads to her regaining the use of her legs.

But she's almost motivated after she finds out why her classmates have nicknamed the three friends the U.N. It's not racist, she finds out. Instead, it has more to do with their . . . lack of perceived sexual desirability. Devi's response is to march up to Paxton, confess her desire for him, and ask him to sleep with her – just sex, no strings attached.

Girls like Devi, while not unheard of in the sex comedy cinematic world, are rarely at the center of it. I'm not just talking about the overwhelming whiteness of the genre, but the specific type of girl who gets chased or who even gets featured.

Which is to say, girls like Devi are rarely if ever seen in these movies. Even when they're the lead of a romantic comedy, they're portrayed as unconventionally quirky wallflowers, interesting for reasons having nothing to with their GPA. This Molly Ringwald type pines away silently for a boy, hoping he'll notice her, sometimes attracting attention she doesn't want. Maybe he eventually does notice her.

Or maybe she ends up with the Duckie, a dude who is on her social level who she's otherwise friend-zoned. If and when that happens, the audience is generally made to understand that the pair are probably going to start things slow.

Leap to the other end of the spectrum and you'll find Alyson Hannigan's character in "American Pie," the band-camp-obsessed geek who is the hero's prom date of last resort, and who ends up being the most sexually experienced and aggressive one in school – which, naturally, plays as a joke because who'd have thought it? She's such an un(blank)able geek.

Each of these character types were brought to us by men, by the way.

In Devi, Kaling and her co-creator Lang Fisher answer these longstanding tropes with a realistic teen girl who isn't popular but doesn't shrink inside of herself either. Devi is exceedingly normcore with a touch of unhinged behavior to keep everyone on their toes; her lack of predictability makes her charming to her too-hot quarry, and his lack of perceptiveness makes him unable to recognize that this weird girl who keeps coming around is in fact suffering.

The mournful undertones in "Never Have I Ever" cast Devi's frantic struggle sympathetically. Throwing herself in the direction of a boy who barely knows she's alive is a potent distraction from mourning her father's death. Her therapist (Niecy Nash, slightly underutilized but wonderful whenever she pops up) can't seem to break through the shields Devi has put up and can only help her notice the cracks in her calm.

She's also there to help the viewer recognize that Devi's supposed boldness that manifests as a horniness is in part an outgrowth of her quiet breakdown..

Highlighting this part of the story is the curious choice to have tennis legend John McEnroe narrate Devi's inner thoughts with the cheer and verve of a sporting match. McEnroe, we're told in the first episode (by way of a dream where Mohan reappears to Devi) was her father's favorite athlete because he admired McEnroe's aggressiveness.

To the viewer, the tennis legend-turned-sports commentator's constant presence might be seen as a stroke of inspiration. For Devi and any other women raised to prioritize control and desire suppression above all, expressing confusion and anger, or intentionally making risky decisions are choices men can get away with. These qualities may even be perceived as power moves.

Looking at it another way, though, hearing the voice of an old guy white guy delivering the color commentary on a teenage girl's quest to lose her virginity may understandably come off as creepy.

Regardless of how this choice strikes you, when viewed in relationship to the entirety of "Never Have I Ever" the narrative choice isn't enough to sink it. At worst it takes getting used to; besides, Ramakrishnan's charming performance far and away overrules any weaknesses in the series. She plays Devi with an evocative combination of cleverness and sensitivity that sails through each episode, and the ensemble surrounding her matches that energy perfectly.

"Never Have I Ever" also skillfully interweaves Devi's identity as the daughter of Indian immigrants through the heart of the story. But where other works might have pitted her family's heritage against some perception of so-called Americanness, "Never Have I Ever" treats the Vishwakumar family's experience as a marriage of cultural tradition and the celebration of the possibility America affords; Mohan's adoration for his only daughter is partly a reflection of his love for all things American, Californian more specifically.

This doorway allows the writers to expand their focus beyond Devi's teenage misadventures to delve into Nalini's and Kamala's separate efforts to figure out who they want to be versus who they are expected to be. Jagannathan and Moorjani channel enough complexity into their performances to make their characters' respective emotional evolutions as vital to the story's success as Devi's circuitous trek.

Through them and, to a lesser degree, the concurrent revelations Fabiola and Eleanor experience while their friend is busily finding herself, "Never Have I Ever" becomes a smart, heartfelt guide to several versions of a woman's awakening, acknowledging that for women expressing desire and feelings can be a trickier business than TV or film typically presents.

Students of the rom com and teen sex comedy will find a lot to enjoy about it even if they see a few obvious moves coming from the first episodes; Devi's behavior might be unpredictable, but the season's eventual outcome is not. Even that has its appeal right now, though. Devi, in a fit of desperation, tells Fab and Eleanor that they are "glamorous women of color who deserve a sexy high school life," and she's right. Everyone does, even in their own minds and memory. It's nice to see someone acknowledge this, and the fact that it's Kaling doing the deed makes enjoying the story that much sweeter.

"Never Have I Ever" is currently streaming on Netflix.