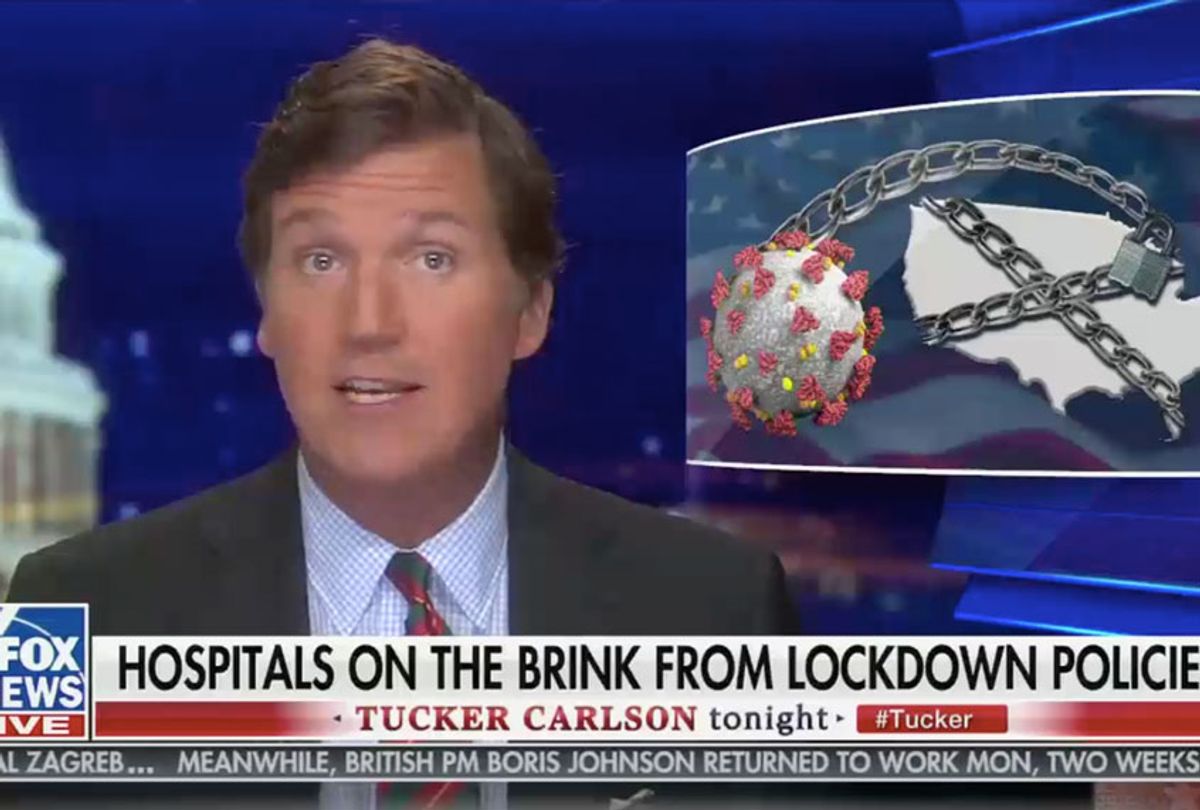 Fox News host Tucker Carlson argued on Monday that the new coronavirus was not "nearly as deadly as we thought" as he contradicted experts by claiming that the flattening of the curve of infections was not the result of government lockdowns.

"Six weeks later, we are happy to say that curve has been flattened. But it's likely not because of the lockdowns. The virus just isn't nearly as deadly as we thought it was — all of us, including on this show. Everybody thought it was, but it turned out not to be," Carlson said of a virus whose spread has caused more than 50,000 people in the U.S. in a matter of weeks. "Hospitals never collapsed. Outside of a tiny number of places, they never came close to collapsing — at least not from an influx of infected patients."

Though the number of patients did not hit the projected levels in most hospitals, some New York hospitals where the virus hit hardest were quickly overwhelmed even after the lockdowns began.

Dr. Anthony Fauci, the top infectious disease expert in the country, has both argued that the lockdowns and social distancing guidelines absolutely worked and questioned why they were not implemented on a national scale. Fauci also said that lockdowns could have saved more lives if they were implemented two weeks earlier.

Carlson argued that the virus was not "nearly as deadly" as first thought, though scientists have repeatedly argued that the actual death rate would be much lower than the reported death rate because many cases of the virus were undiagnosed and some cases were asymptomatic. An antibody study in New York found that nearly 25% of city residents had been infected and recovered. This means that the death rate is considerably lower when measured against the total population believed to have been infected as opposed to only measuring the number of deaths against confirmed cases.

Though the death rate is clearly lower than the official tally, the number of deaths from the virus has likewise been underestimated. New York, for example, recently added nearly 4,000 people believed to have died from underlying conditions triggered by the coronavirus to its death toll. Even this toll only includes patients who died at hospitals or nursing homes. New York Mayor Bill de Blasio said that the city has been unable to fully count the number of deaths at home.

"I am assuming that the vast majority of those deaths are coronavirus related," he said earlier this month. "It's understandable in a crisis that being able to make the confirmation is harder to do with all the resources stretched so thin."

An analysis by The Washington Post found that the U.S. reported about 15,400 excess deaths in the early weeks of the crisis — nearly two times as high as the number of deaths attributed to the coronavirus at the time.

"The excess deaths are not necessarily attributable directly to COVID-19, the disease caused by the coronavirus," the outlet reported. "They could include people who died because of the epidemic but not from the disease, such as those who were afraid to seek medical treatment for unrelated illnesses, as well as some number of deaths that are part of the ordinary variation in the death rate."

Gov. Andrew Cuomo, D-N.Y., agreed last week that the official death count was "not an accurate total number of deaths, in my opinion."

"That number is going to go up," he said. "Those deaths are only hospitalization or nursing home deaths. That does not have what are called at-home deaths."

"Thus, I would probably add about 15% or so to the known death toll," she said in an email to city officials obtained by The Post. "However, no city or state will be factoring this in or reporting it, so I don't think we should either. We should just assume that the deaths are about 15% more than we can count but not include them in official modeling, because we will never really know."

Avegno told the outlet that she was concerned that an undercount of deaths would give officials a false sense of security.

"I worry that the numbers give them a false sense of security that they may be communicating to the public," she added. "They may think the number of cases is more limited but they are not testing widely enough to know."