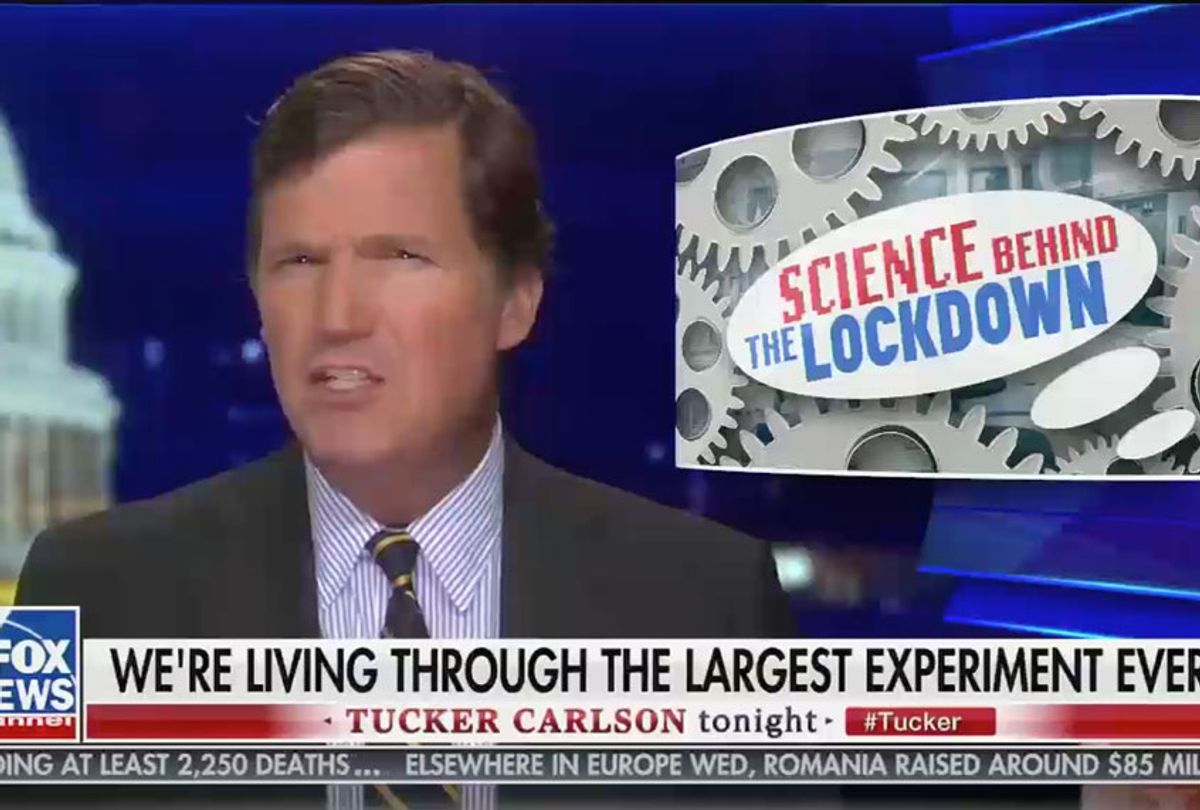 During the months when Donald Trump thought he could somehow defeat the novel coronavirus by lying, minimizing it and calling concerns about the coming pandemic a "hoax," most Fox News hosts were right there with him.  The one major exception, however, was popular prime time host Tucker Carlson. While Sean Hannity kept calling the coronavirus crisis a "hoax" and Laura Ingraham described people concerned about it as "panic pushers," Carlson actually criticized Trump and his Fox colleagues for "minimizing what is clearly a very serious problem," arguing that the virus was "a major event" that "will affect your life." The fact Trump made a reluctant pivot and began to admit that the coronavirus was a real threat — even though he's still trying to cover up the spread of the disease — is likely due to Carlson's pressure.

In fact, the difference between Carlson's approach and that of his fellow Fox News hosts, especially Hannity, was so pronounced that it likely altered the course of the disease. A new study shows that communities that favored Hannity's show over Carlson's show had more cases of COVID-19 and more deaths. The reason is simple: Because Hannity downplayed the seriousness of the coronavirus, his viewers were less likely to follow stay-at-home recommendations and therefore more likely spread the disease.

Don't get too soft on Tucker, however. He wasn't motivated by a real concern about the safety of his audience, much less about Americans at large. He simply took a more opportunistic attitude, viewing the inevitable panic and instability that would result from the pandemic as a chance to push his white nationalist views by blaming immigrants. He encouraged people to embrace racist frames that implied people of color were dirtier than white people, and encouraged Trump to use the pandemic as an excuse to shut down immigration. Trump has taken that advice, although his ban — which only affects people seeking green cards, not those seeking temporary work visas — has already been criticized by Carlson, who thinks it doesn't go far enough.

But now even Carlson's racism-inflected willingness to take the coronavirus seriously has abruptly ended. Starting at the beginning of April, even after his Fox News colleagues had begun to take the virus more seriously, Carlson switched gears and moved toward a denialist viewpoint. He started attacking public health officials for the stay-at-home orders and saying the economic results of the lockdown were worse than the disease.

(This argument, it should be noted, is entirely false. The notion that the economy would be doing fine with a highly contagious and often deadly disease ripping through the population is asinine. Evidence shows that the economy will not rebound, even if politicians remove the lockdown orders. And, as I've repeatedly argued, workers who stay home because they're sick aren't any more productive than workers who stay home because they're under lockdown.)

As happened with his emerging white nationalism, Carlson's denialist stance towards the coronavirus has only grown more extreme in the past few weeks. Last week, he praised the astroturfed protesters who swarmed state capitals, armed with rifles and Confederate flags, to portray the lockdowns as an elite conspiracy to destroy Trump.

"Mass quarantines, they tell us again and again, are the only way to save lives, but that's a lie," he said, bizarrely suggesting that quarantines have "never been done" and saying that we "have spent trillions of dollars and crushed millions of people, purely on the guess that a nationwide lockdown would save us from the coronavirus."

Carlson is lying, which should be obvious without even doing a moment's worth of historical research. If quarantines are a brand new thing that no one has ever considered before, why do we have a word for the practice? How is it that the word for this novel, unheard-of practice is so common that everyone knows what it means? How many other words does the English language have for things that don't exist and no one has ever heard of?

Humans figured out quarantines worked before they even knew why they worked. The CDC website I found after a Google search for "history of quarantine" explains that the "practice of quarantine, as we know it, began during the 14th century in an effort to protect coastal cities from plague epidemics," by holding ships at anchor for 40 days before docking. The website for PBS' "Nova" dates the practice back to 549 A.D. Boston first instituted maritime quarantines in 1647. Federal management of quarantine orders dates back to the 19th century.

Famous works of literature — including the Bible, with its references to leper colonies — have references to the practice. "The Decameron" by Giovanni Boccaccio, one of the most famous literary works of the Renaissance, is about people telling stories to pass the time as they shelter in place to avoid the bubonic plague. "The Plague" by Albert Camus tells the story of a plague and quarantine measures in a 1940s setting. Why do Romeo and Juliet die in the famous Shakespearean play? Because a messenger with a letter outlining the plan for their survival is waylaid by a quarantine. (Those of us still awaiting Amazon packages can relate.)

Tucker claims he's the protector of the great traditions of "Western civilization," mind you, but when it comes to actual history, he's decided to play ignoramus.

Of course, it's hardly news that Carlson thinks his audience consists of illiterate morons who don't know any history prior to 1982, but even for him this is a stretch. People know how disease spreads and why reducing exposure works. Polling shows that not only are Americans broadly supportive of the shelter-in-place orders, but that even a majority of Republicans aren't keen on ignoring well-established germ theory just because Fox News tells them to.

Still, Carlson is doing this for a reason: He needs to give his audience some excuse to claim that none of this is Trump's fault. (Narrator: It is Trump's fault.) He's offering them a conspiracy theory that these lockdowns aren't an authentic attempt to slow the spread of a deadly disease, but an invented crisis aimed at bringing down Trump. It's true that Carlson hasn't come out and said that, but it's the only real conclusion one can draw from his accusation that thousands of public health experts, bureaucrats and elected officials are working together (and none are blowing the whistle!) to crash the economy in order to grab "godlike power" for themselves.

There is no small amount of projection in his rant, in which he complains that "mediocre people" are trying to control "when people can get married, which medical procedures you are allowed to have." The people who are actually interested in doing that are, of course, Republicans who would like to ban same-sex marriage and abortion. But of course, accusing your opponents of doing what you are actually doing is exactly what right-wing conspiracy theorists do.

Carlson's full-blown Alex Jones-style conspiracy theories aren't just a threat to our democracy. They're a threat to the health of his viewers. As the study mentioned earlier in this piece has shown, many Fox News viewers are willing to break the stay-at-home orders to demonstrate their loyalty to Trump and faith in Fox News. Some have already died because of this. Tucker Carlson clearly doesn't care how many of his own viewers get sick and die. He has a larger agenda: Create some explanation, no matter how preposterous, that deflects the blame for this national catastrophe away from Donald Trump.