Who'd a thunk it? Right-wingers are a bunch of spoiled brats who start whining over the slightest inconvenience 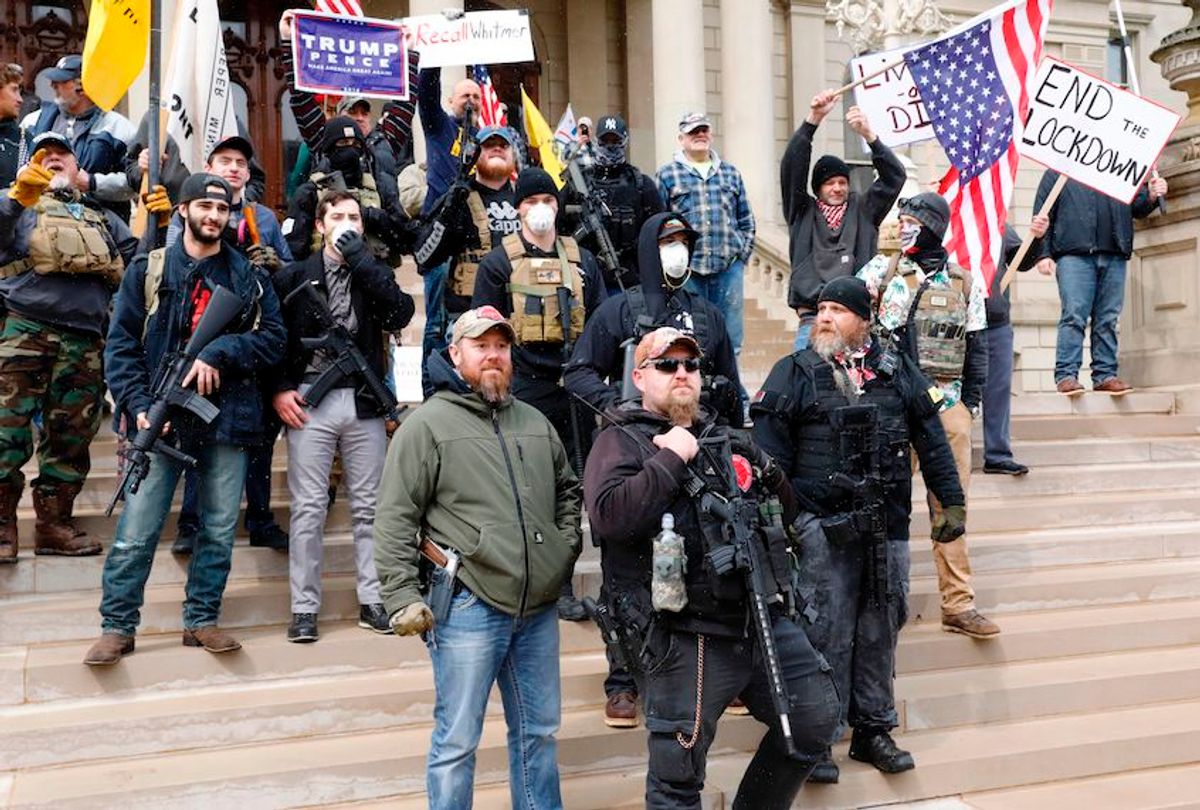 People take part in a protest for "Michiganders Against Excessive Quarantine" at the Michigan State Capitol in Lansing, Michigan on April 15, 2020. (Jeff Kowalsky/AFP via Getty)
--

On Wednesday, a crowd of right-wing nuts — complete with their oversized but underworked utility vehicles, Confederate flags, guns and other such overcompensation accoutrements — descended on the State Capitol in Lansing, Michigan, to whine about the temporary pause to dinners at Applebee's and accidental brushfires at gender-reveal parties. The deep fear of emasculation driving the protest was not particularly subtle at this protest, as the crowd chanted "Lock her up" at Gov. Gretchen Whitmer, a Democrat who is accused of no other crime other than making deeply insecure men fuss about a woman in power.

The ostensible purpose of the protests was to pressure Whitmer to relax some of the restrictions on businesses and movement under the coronavirus lockdown. In reality, of course, this is happening because a bunch of Fox News-loving Trump supporters have been poisoned by propaganda that has convinced them the coronavirus is overblown or a hoax, all being spread by the libs to destroy Trump's chances at re-election.

Well, that, and the fact that they're a bunch of sexists who hate having a female governor, which goes a long way toward explaining why the Michigan protest was bigger than others in Ohio or North Carolina, whose governors are male.

The immense Trump propaganda infrastructure is marshaling these folks for one simple reason: This crisis is Trump's fault, and he desperately needs someone to blame for his failures, which have led to the spread of the virus and the collapse of the economy. So these numbskulls are being organized to protest the governors who are trying to clean up Trump's mess, which is a little like protesting the doctors who are treating patients who got sick because Trump refused to do anything serious to limit the spread of the virus.

Oh wait — they did that, too, by blocking ambulances trying to take patients to the hospital.

The protest is incoherent. Everyone wants to reopen the economy, but the main reason we can't is because Trump, in his incompetence and malice, has persistently refused to take steps to institute the widespread testing that's necessary before lockdowns can be eased. If these conservatives want the economy to restart, they should stay home, stop watching Fox News and give money to any Democrats running for anything, because the only way this country can survive this is with competent leadership that's willing to do what needs doing.

That incoherence goes even deeper than the immediate idiocy of blaming the people who are trying to fix the problem instead of the orange menace in the White House who caused it. These protests also lay bare the larger incoherence of the right-wing mythology that conservatives are rugged individualists who are tougher and better prepared than those supposedly soft, effete liberals in the big cities.

Right-wingers love to talk a big game about how tough they are, compared to the avocado-toast-eating class, but what Wednesday's protest revealed was a bunch of spoiled brats ready to fall apart in the face of even the slightest inconvenience.

Rosanne Ponkowski, one of the protest's organizers, complained to the Daily Beast, "We can't take our boats on the water if they have an engine" and added, "We can't buy paint and go paint our house."

Other massive infringements on liberty: The inability to buy patio furniture, Legos or bug spray. It's not easy to hire somebody to mow the lawn. You literally can't make this stuff up.

What is immediately clear is that these "rugged individuals" fall apart completely at the first sign of even the slightest hardship. For all the History Channel documentaries about World War II they might consume, they aren't exactly the hard-bitten warriors they dream themselves to be. Instead, they're a bunch of whiny babies who have spent their entire lives in the consumer bubble, and react to the prospect of giving up fishing for a few months as if their legs were being forcibly amputated.

Turns out that these individuals are, in fact, highly dependent on the communities they live in, so much so that a few weeks of needing to curtail shopping and socializing has led to a total meltdown.

The obvious truth here is that times are hard on everyone. That's especially true for the 22 million Americans who've filed for unemployment, the more than 600,000 who are sick, and the families of the nearly 30,000 people who have died from this virus. But there's plenty of room to feel compassion for the rest of us who are going stir-crazy, who are fighting with family members or who are suffering from social isolation.

Hell, there's nothing wrong with being grumpy that you can't get your garden planted in time this year or that you can't go fishing. People deserve pleasure, especially during a crisis when the small things are often what keep us going. State governments should certainly strive to write quarantine regulations that strike a balance between public heath needs and ordinary people's desire to find joy in their daily lives.

But it's really rich for the self-proclaimed "rugged individuals" of America to be such big, whiny babies in the face of this.

We're forever hearing from right wingers how the rest of us need to toughen up a little. People on food stamps just need to "get a job," even though most food assistance recipients already have one. If millennials can't afford to buy houses, it's because they're over-indulged hipsters who eat too much avocado toast. (Reality: They're trapped by soaring housing costs and saddled with too much student debt.) A woman who doesn't want to be forced into childbirth should have just kept her legs shut.

Right-wing America have little sympathy for millions of their fellow citizens who face real hardship, but an endless amount of self-pity because they have to skip a fishing trip. No wonder they love Trump, a man who can't be bothered to care about Americans dying, but is in full-blown panic mode because he might not get re-elected.

In reality, this pandemic has exposed how we're all in this together and none of us are "rugged individuals." We need those health care workers and grocery store employees and teachers. We are all dependent on each other, not just for the basic necessities of life, but the luxuries like boating and gardening. Right wingers have spent decades denying this fact, clinging to their Ayn Rand fantasies that they're not dependent on the rest of us and are under no obligation to pay their taxes or by treating others with decency and compassion.

But it turns out that conservatives are more dependent on the system that all the people they deplore as weak, so much so that a minor interruption in their daily life causes a full-blown temper tantrum like the one we witnessed in Michigan this week. More are coming, we can be sure of that.