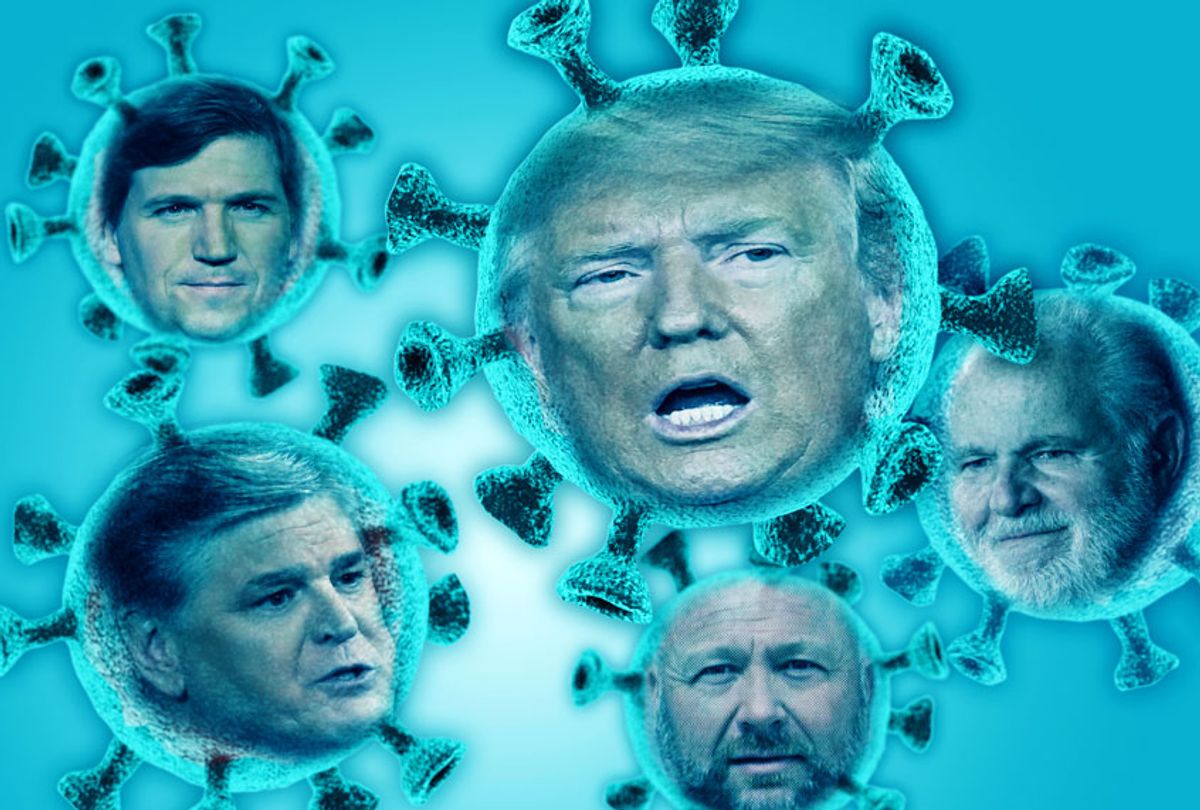 Donald Trump and the massive propaganda apparatus around him — call them "TrumpLand" — cannot decide what lie to tell about the new coronavirus, COVID-19, that is now exploding into a global pandemic. Simply not lying is of course not an acceptable option. The unofficial motto of the Trump administration is quite clearly "Lie about everything, all the time, even for no apparent reason." In this case, Trump is facing a very real PR crisis, and the first instinct of this president and his advocates is always to find some way to lie themselves out of their latest pickle.

The problem this time, as many people have noted, is that you can't lie your way out of a pandemic. Even China, which is an authoritarian one-party state that lies to its population constantly about everything, was unable to bamboozle the public about the virus. (And the epidemic there appears to be receding.) Trump, still saddled with a free press, is stuck snarling "Fake news!" at CNN's Jim Acosta, when the latter pointed out that Trump's lies conflict with the statements of health experts.

So what we're experiencing is a bunch of liars who are way in over their heads, scrambling around like cockroaches, trying to grasp the One True Lie that will somehow make this whole problem go away. It's not working out, but here are some of the falsehoods they've been trying.

1) The mainstream media is blowing this out of proportion in order to hurt Trump! This was, by far, the favorite TrumpLand take early in the coronavirus crisis, when the president's inner circle still hoped they could fool America into thinking there was no crisis. This wasn't just the standard line from Fox News, but also from Trump himself, who told a rally stuffed with his base of elderly, high-risk individuals that coronavirus panic was the "new hoax" concocted to hurt him. (Note: The previous "hoaxes" he compared it to — his collusion with Russia, his blackmail scheme against Ukraine — were also completely real.)

In recent days, Trump's continued instinct to downplay the seriousness of the disease — such as saying that his "hunch" tells him it's not that serious — has given way to a very reluctant admission that the coronavirus is a problem. But for the right-wing punditry that has assigned itself the task of lying relentlessly on Trump's behalf, the dream that they can make disease go away with a heavy application of bullshit won't die.

Sean Hannity of Fox News has spent most of this week trying to minimize the dangers of the disease, continuing to use the word "hoax," pretending that the lack of coronavirus testing indicates an absence of new cases, calling the whole situation a "fraud" and, as a last resort, waxing "philosophical" about how "we're all dying" anyway, so there's no need to ramp up the response.

Rush Limbaugh, recently bestowed the Medal of Freedom by Trump, has gone full tilt into denying that the situation is serious. He keeps saying this is "exaggerated and built-up" and insisting that the coronavirus is nothing more than a "common cold," When presented with evidence that COVID-19 is perhaps 10 times as deadly as the flu, Limbaugh responded with "who cares," claiming that a 1% fatality rate is no big deal. (Limbaugh is battling advanced lung cancer, and ought to know that the risks are significantly higher for people with underlying respiratory illness.) One percent sounds small, but projections suggest that as the virus spreads throughout the U.S. population, we could see many thousands of deaths.

Tomi Lahren of Fox Nation, always trying to hog the spotlight by out-stupiding her fellow right-wing pundits, declared that she is "far more concerned with stepping on a used heroin needle," a disaster easily prevented by watching where you're going.

2) Trump has this under control! Reporting by non-propagandistic outlets has made it clear that the coronavirus is much worse than it had to be because of Trump's incompetence. The administration's many failures are far too numerous to recount here, but suffice it to say that more energy was put toward dimwitted efforts to spin this situation than toward actually fighting the virus spread.

On Wednesday night, Trump did his Trumpian thing and went big: He banned travel from Europe (making sure to exempt any travel from which he might personally profit). This was widely criticized as an ineffective gesture, meant to look tough without actually doing the hard but more effective work of actually getting people tested.

Meanwhile, the propaganda troops are out there, bowing and praising Dear Leader for his brilliance and courage in this crisis. Elisabeth Hasselbeck went on "The View" to gush that she feels "comfortable and confident" about the situation, thanks to Trump's "strong leadership" — and, of course, because of prayer. (Prayer is not as successful as soap and water as a disinfectant.)

Tammy Bruce on Fox Nation claimed that the "president's gotten the country healthy, healthy enough of course to withstand this." I don't know what that means.

Laura Ingraham bit down hard on this nonsense, declaring, "In times of crisis, it helps to have a president who makes his own decisions, who marshals the right resources, and surrounds himself with the most competent people to do the job." All of which might technically be true, but none of which even remotely applies to the president she was actually talking about.

It's unclear how much Trump supporters are buying this nonsense. They elected Trump because they liked his racism, his misogyny and his general trolliness, not because they mistook him for someone who was either honest or competent.

3) Racism will fix everything! From the get-go, Tucker Carlson of Fox News has been pushing for TrumpLand to respond to the coronavirus by stirring up fear of Asian-Americans and immigrants. While his fellow propagandists were still trying to pretend the epidemic was a hoax, Carlson acknowledged the disease was real and blamed it on "identity politics". On Wednesday night, he kept that up, insisting on calling it the "Wuhan virus" in order to stoke racist fears and inform Americans of the true "significance of this virus". In response to Rep. Ilhan Omar, D-Minn., correctly noting that viruses don't have nationalities (it's true — they can't even get passports!), Carlson said, "Oh, shut up."

He did not explain why he thought a virus might have a nationality, however.

This is a global pandemic that doesn't check your racial identity before infecting you, but that hasn't slowed down the rush to make this into Scare Old White People About Racial Diversity Hour. Trump's hyper-focus on travel bans over testing is a big part of this. Trump has also been trying to link the virus to his desire to build a border wall with Mexico, which assumes that a) Canadians can't get coronavirus (they can) and b) that walls kill viruses. (As usual, I would like to remind readers that inexpensive soap and water are your friend, and no walls are necessary.)

Trump's bizarre Oval Office speech continued on this theme, with Trump emphasizing that this is a "foreign" virus and blaming Europe for the problem, instead of his own incompetence that's allowing it to spread the old-fashioned way, from American to American.

4) Buy my snake oil! In right-wing media, everything is viewed through the lens of how it can be used to separate fools from their money, and the coronavirus outbreak is no exception. Sure enough, conspiracy theorist Alex Jones, fresh off a recent DUI arrest, was on the air, claiming that his — wait for it — toothpaste would protect viewers from COVID-19. (Readers, this toothpaste is discounted to $8 from its usual $15. A tube of Colgate at the store continues to cost $2.)

Meanwhile, disgraced televangelist-cum-snake oil salesman Jim Bakker is getting sued by the state of Missouri for claiming that his "Silver Solution" would cure the coronavirus.

Fun fact: The main ingredient of both the Alex Jones toothpaste and the Jim Bakker snake oil — colloidal silver — has been known to turn people blue. No, really. Blue like a Smurf. So not only is it foolish to waste your money this way, you run the risk of marking yourself for life as hopelessly gullible and also blue. So don't do it.

It's fun to laugh at right-wing shenanigans, but of course this entire situation is deadly serious. There's the clear potential that thousands of people may die and that hospitals and other health-care facilities will be overrun. The more Trump flails, mostly in an effort to calm the financial markets (since he clearly doesn't care about people dying), the worse it will get. The Dow and other market indexes keep plunging as traders realize that it is a bad thing to have a half-literate, sociopathic narcissist, whose only successful job was being a game show host, as president.

All the lying is not boosting confidence. It's only creating more panic, as people realize that Trump is playing his usual games, this time literally with public health and well-being. Literally, the best thing Trump could do right now is to shut up and let the few functional adults who remain in the administration handle this. Maybe he could let House Speaker Nancy Pelosi be the face of federal response, to give people the impression that someone competent is in charge? Of course not — that would require some humility, something this president has never experienced.