With the gaps filled in, Trump's plot to extort Ukraine into helping him rat-f**k Biden in 2020 becomes clear 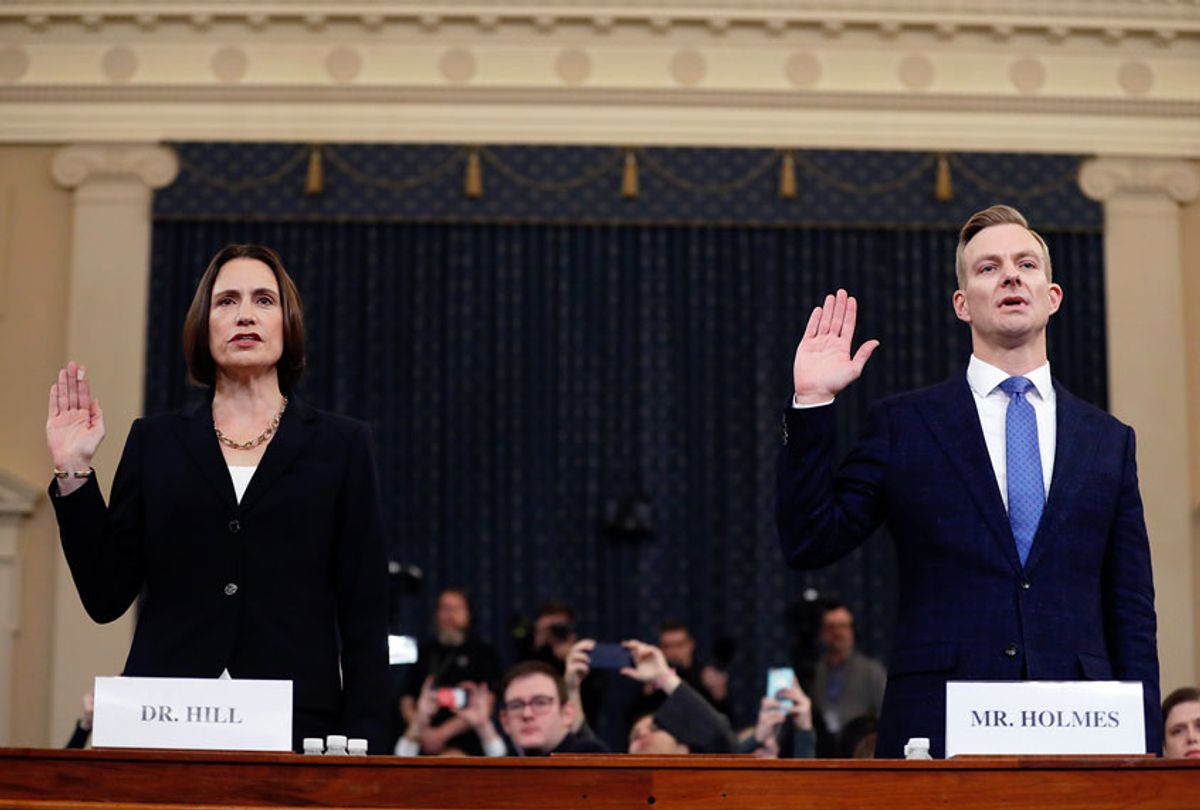 Former White House national security aide Fiona Hill, left, and David Holmes, a U.S. diplomat in Ukraine, are sworn in to testify before the House Intelligence Committee on Capitol Hill in Washington, Thursday, Nov. 21, 2019, during a public impeachment hearing of President Donald Trump's efforts to tie U.S. aid for Ukraine to investigations of his political opponents. (AP Photo/Andrew Harnik)
--

After the explosive testimony of Gordon Sondland — the EU ambassador and major Donald Trump donor — on Wednesday, it was hard to imagine how Democrats might build on it in Thursday's hearing. On the surface, the witnesses seemed less significant: Fiona Hill, the former Russia director for the National Security Council, and David Holmes, a U.S. diplomat working in Ukraine.

But, nope, it was another day of riveting testimony that made excruciatingly clear that the entire Ukraine extortion scheme was directed by President Trump — and was not, as Republicans have begun desperately hinting, some "freelancing" by Trump's subordinates in which he somehow played no part.

To add to the excitement, Hill basically warned Republicans that their efforts to protect Trump are turning them into stooges of Russian President Vladimir Putin.

Most importantly, Hill and Holmes filled in the final holes that allowed the full story of Trump's extortion scheme to come fully into view. None of the Republican claims that Trump's behavior was ambiguous enough to allow for an innocent explanation hold water.

Holmes' testimony helped build on Sondland's from Wednesday, clearing up how much Trump was in charge of the plot to use military aid and the promise of a White House visit to pressure Ukrainian President Volodymyr Zelensky to go on CNN and declare "investigations" into Trump's potential 2020 election rival, former Vice President Joe Biden. As Holmes noted, it was clear for months that Trump's lawyer, Rudy Giuliani, was messing around in Ukraine as part of a scheme to cook up a conspiracy theory about the Bidens, due to Giuliani's "frequent public statements" and the placement of a story by New York Times reporter Ken Vogel that seeded this conspiracy theory.

Holmes explained that he and other diplomats were well aware of Trump's irrational dislike for Ukraine and spent time trying to convince him to see the country in a better light, to no avail. In June, it became clear to Holmes that the only thing Trump cared about was "the Burisma/Biden investigations that Mr. Giuliani and his associates had been speaking about in the media since March."

Holmes also told the House Intelligence Committee that just a day after Trump's infamous July 25 call with Zelensky, Holmes was shut out of a meeting between Sondland and Zelensky's aide. Right after that meeting, Holmes overheard a phone call between Trump and Sondland in which Trump said, "So, he’s gonna do the investigation?" and Sondland replied that Zelensky would do “anything you ask him to."

Afterwards, as has been previously reported, Sondland confirmed to Holmes that Trump doesn't care about Ukraine, but was only interested in using the Ukrainian government for his own political advantage.

Hill, for her part, used her opening statement to call out Republicans for letting their loyalty to Trump turn them into foot soldiers for Putin's agenda.

"In the course of this investigation, I would ask that you please not promote politically driven falsehoods that so clearly advance Russian interests," Hill pleaded.

This was a clear shot at House Intelligence ranking member Devin Nunes, R-Calif., who has been used his time in the impeachment hearings to back up Trump's wild claims that he was the victim of a Ukrainian conspiracy to manipulate the 2016 election in favor of Hillary Clinton. This conspiracy theory, as Democratic members reminded the public during witness examination, is also one that Putin has been pushing since Trump's inauguration.

With Holmes and Hill's testimony added to the pile, what seems to have happened has come into view: Trump, fueled by Putin-friendly right-wing conspiracy theories and his own unwavering and mysterious pro-Russia bias, decided long ago that he views Ukraine as a personal enemy. Giuliani, motivated by a desire to play gangster and an eye toward personal profit, thought he could stoke and exploit Trump's paranoia for his own gain. Together, they concocted a scheme to pressure the Ukrainian leadership into backing up Trump's favorite conspiracy theories, which Trump believed would help him win re-election. Along the way they had to remove the U.S. ambassador, Marie Yovanovitch, who they feared would get in the way, and also cultivated relationships with corrupt Ukrainians who were eager to help.

But the election of Zelensky, who ran on an anti-corruption platform, was a threat to their plans. So Trump's plotters turned up the heat, using the Ukrainian need for U.S. military support in their conflict with Russia as leverage to remind Ukrainian leaders that they were in no position to thwart Trump's desires, no matter how shady or illegal those might be.

It almost worked. As Holmes testified, Zelensky was preparing to give "the requested CNN interview," in which Trump expected him to insinuate Biden was dirty, in exchange for the promised aid. If House Democrats hadn't opened this investigation, we would currently be hearing about a "scandal," likely still being pimped by Vogel at the New York Times, based on false allegations against Biden. And the crimes committed by Trump and numerous others would have remained unreported.

Giuliani, it appears, still hasn't let go of all this — he's still out there, insisting that he will finally make his conspiracy theory against Biden stick.

After a lengthy break for lunch and a House vote, all that an increasingly listless Nunes could do was, in weary tones, to run down his list of conspiracy-theory buzzwords — "Alexandra Chalupa," "the Steele dossier" — while rattling papers around and acting busy. House Republican counsel Steve Castor, with barely any more enthusiasm, walked through some similar paces, trying to bolster the weak talking points that Fox News and Republican politicians are clinging to in order to justify defending Trump.

It's clear now that Nunes and the Republicans have nothing. They know that Trump is guilty and that defending him will be read by the majority of the public as a cover-up. They're just counting on the fact that our electoral system is built such that their party can hang onto power without actually winning a majority vote.

Of course they won't listen, but Republicans should really heed Fiona Hill's words of warning. By backing Trump to the hilt, Republicans are backing Putin's agenda. There is literally no way to do the former without doing the latter.

Trump's extortion scheme was no doubt primarily motivated by his personal interest and, frankly, by the sheer pleasure he takes in cheating and using his power to bully others —including other nations' leaders — who he sees as less powerful than himself. But it's also clear that this entire scheme also goes back to Trump's unshakeable affinity for Putin and Russia's authoritarian government. Trump's loathing of Ukraine appears to stem from Putin. His actions in Ukraine served Putin's ends. His undermining of American democracy and his eagerness to cheat in elections serves Putin's aim of reducing international faith in democracy.

There's no way to back Trump without backing Putin. Republicans have made their choice.