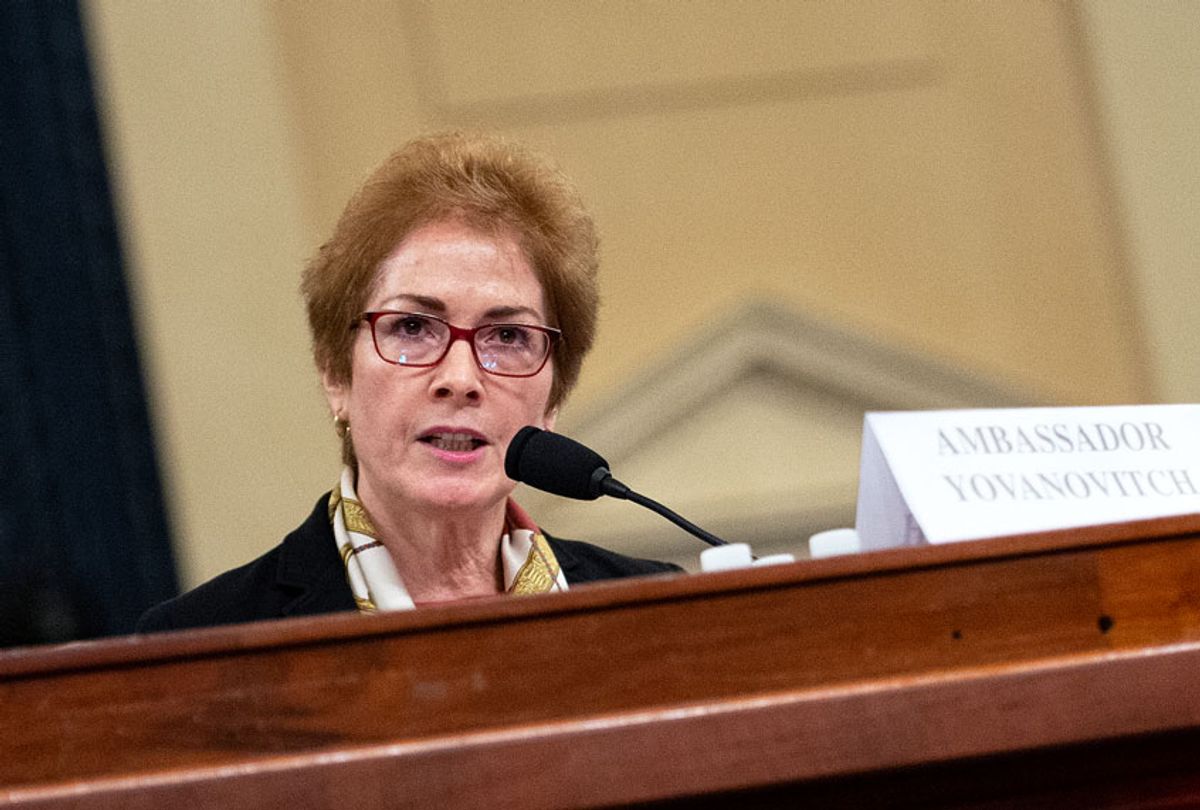 In the morass of conflicting and often incomprehensible Republican defenses of Donald Trump, there is just one that seemed like it might have legs — especially after Rep. Will Hurd, R-Texas, spoke during Wednesday's impeachment hearing. That would be the claim that Trump withheld military aid from Ukraine not to strong-arm that nation's leaders into boosting his re-election campaign, but because of a generalized opposition to "corruption" in that nation. This was laughable on its face, since Trump's clear and public stance throughout his political career has been pro-corruption. But sure, it might be enough to bamboozle some Americans who don't follow politics closely and somehow missed hearing that their president is a grifter.

Friday's hearing, which featured Marie Yovanovitch, the former U.S. ambassador to Ukraine, should be enough to kill the last remaining tendrils of any good-faith claim that Trump was motivated by some — don't laugh now — deeply felt objection to corruption in Ukraine.

"In her time in Kyiv, Ambassador Yovanovitch was tough on corruption, too tough on corruption for some, and her principled stance made her enemies," House Intelligence Chair Adam Schiff, D.-Calif., said in his opening statement. "And Ambassador Yovanovitch did not just 'piss off' corrupt Ukrainians, like the corrupt former prosecutor general Yuri Lutsenko, but also certain Americans like Rudy Giuliani, Donald Trump's personal attorney, and two individuals, now indicted, who worked with him, Igor Fruman and Lev Parnas."

In her own opening statement, Yovanovitch carefully laid out the case that she was fired over her anti-corruption work in Ukraine, because "Ukrainians who preferred to play by the old, corrupt rules" had found similarly corrupt Americans and "succeeded in orchestrating the removal of a U.S. ambassador" — if you're keeping score, that would be Yovanovitch herself.

Despite efforts by Republicans to suggest there was some legitimate reason for Trump to remove Yovanovitch from her post, her testimony made clear that Trump, Giuliani and some of Giuliani's sleazy associates zeroed in on her specifically because they saw her anti-corruption views as a direct threat to the schemes they had for Ukraine.

Yovanovitch doesn't seem to have known, while she was at her post in Kyiv, that Giuliani was trying to leverage Ukrainian connections in a scheme meant to level false accusations at former Vice President Joe Biden. But it's apparent that Giuliani and his goons saw her as a general threat because of her strong anti-corruption views.

Far from being opposed to corruption in Ukraine, Trump appears to have been instinctively drawn to the most corrupt people in the country, and ended up firing his own ambassador in hopes that such corrupt figures could help him cheat in the 2020 election back home.

That in itself is alarming enough. What also came across during the hearing was the personal malice with which the campaign against Yovanovitch — regularly and correctly called a "smear campaign" — was conducted. For months, Giuliani, a corrupt Ukrainian ex-prosecutor named Yuri Lutsenko, Giuliani's shady fixers, then-Rep. Pete Sessions, R-Texas, Donald Trump Jr. and the president himself spread vicious lies about Yovanovitch, eventually driving her from her post.

The nastiness against Yovanovitch continued after she was driven from the office. During his infamous July 25 call with Ukrainian President Volodymyr Zelensky, Trump referred to her (not by name) as "bad news" and said, "Well, she's going to go through some things."

"It didn’t sound good. It sounded like — a threat," Yovanovitch said during the hearing.

Even during Friday's hearing itself, Trump kept up the vitriol, going on Twitter and blaming Yovanovitch personally for not being able to single-handedly end the civil war in Somalia when she was posted there. Schiff read the tweet aloud to Yovanovitch, calling it "witness intimidation," which could in itself be an impeachable offense.

The ugliness of Trump and his allies toward Yovanovitch is deeply weird on its surface. It's one thing for a criminally minded conspiracy of the sort Trump and Giuliani were running to coldly remove anyone they see as a threat to their schemes. It's another thing to get so obsessive, personal and vitriolic about it.

Ultimately, the most obvious explanation for the depths of animosity goes back, as so many things do with Trump, to gender. The hatred towards Yovanovitch and the glee that her Trumpian detractors took in bashing her had a tone familiar to anyone who has seen misogynist gang-ups on social media, such as the Gamergate attacks on online feminist bloggers. For men who hate women, having perceived "permission" to attack one tends to cause them to go buck-wild, and that is obviously what was happening — and continues to happen — with Yovanovitch.

This wasn't a #MeToo story, but it's not hard to see the parallels. Yovanovitch was removed for politically corrupt reasons, but it's clear that Trump and his buddies also just straight up enjoyed taking a woman down a peg.

Yovanovitch's visible pain at being the target of a misogyny-tinged public assault on her character and career was powerful stuff, especially as she is just the latest in a long line of women who bravely, even while trembling, recount their stories of abuse by Trump and his fellow pigs before a national audience. Yovanovitch is such a sympathetic character that Republicans clearly decided the best way to discredit her was to avoid talking about the larger issues of corruption, and instead to attack her right to be perceived as a victim.

One after another, Republicans on the committee fussed over the fact that Yovanovitch still has a job and has had continued access to prestigious job opportunities, trying to reduce the natural sympathy people can experience when they see someone who feels hurt because she's been treated unfairly. The idea was clearly to paint Yovanovitch as spoiled and ungrateful — ironically, leaning on sexist stereotypes to try to wave away any concerns that sexism fueled her mistreatment.

Ultimately, these attacks — like all other Republican defenses of Trump — don't make sense. While it's distressing to see how badly Trump hurt this woman personally, that's not really the issue here. The issue here is that Trump is a corrupt criminal, not that he's an asshole. While he no doubt took pleasure in harming a woman, the bigger problem is why he was doing it, which was in service of a larger campaign to recruit corrupt Ukrainians to help him cheat in the 2020 election. Her pain is compelling, but it's ultimately beside the point.

Yovanovitch herself made this point in her statement, arguing that her removal "should concern everyone in this room" because  "shady interests the world over have learned how little it takes to remove an American ambassador who does not give them what they want."

She will now be subject to an absolute flood of misogynist abuse, similar to the one Christine Blasey Ford endured when she stepped forward to accuse Brett Kavanaugh of sexual assault. It will get personal. She will be called whiny and vindictive, and painted with all sorts of reductive sexist stereotypes. In the face of this, it's important to understand that at the end of the day, this isn't about Marie Yovanovitch. It's about the fact that Trump is a criminal — and he hated her because he saw her as a woman who wanted to prevent crimes.