It's Atticus Finch vs. Cthulhu in the showdown of the century. GOP's bold defense of Trump: LOL, nothing matters 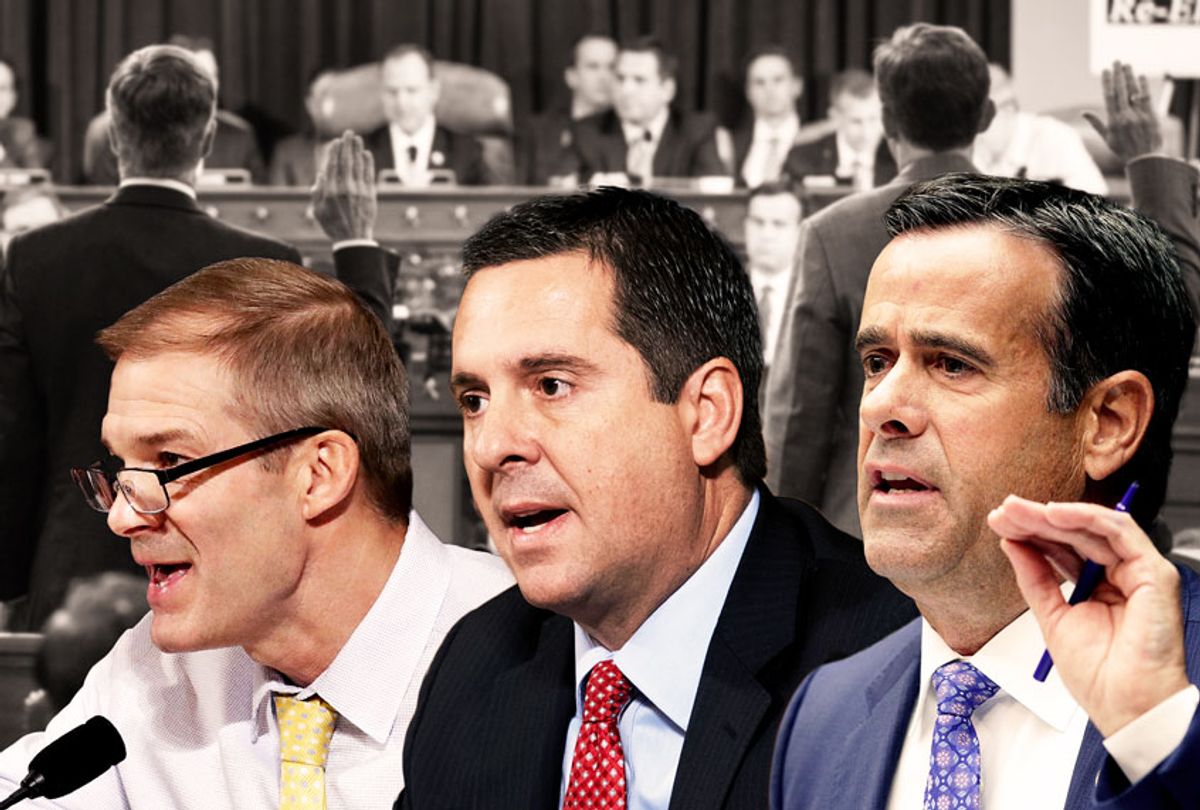 Watching the incoherent, 52 Pickup-style performance of Republicans on the House Intelligence Committee on Wednesday — which seemed less calculated to defend President Trump for his obvious crimes than to convince onlookers that President Trump is a fictional character, crimes are not crimes and that nothing, strictly speaking, can be said to exist at all — I was reminded of two things. Neither of them was directly relevant, but that’s where we are.

I started thinking about “Dialectic of Enlightenment,” the 1947 philosophical treatise by Max Horkheimer and Theodor W. Adorno that pretty much launched the field now known as “cultural studies.” A lot of semi-educated right-wingers, not coincidentally, appear to believe that the “Frankfurt School” (to which Horkheimer and Adorno belonged) essentially ruined liberal arts education in America in the ensuing decades and turned it into a system of indoctrination in “cultural Marxism.” It’s a better-developed anti-Semitic conspiracy theory than most (and yes, that’s exactly what it is), which falls apart mostly because the people who believe it are relying entirely on Glenn Beck’s SparkNotes versions of the books in question and have no idea what they’re talking about.

I feel pretty sure that Jim Jordan and Devin Nunes haven’t read “Dialectic of Enlightenment,” although after their own fashion they are both acting it out. Jordan had apparently gotten A-1 sauce on his blazer in the lunchroom yet again, and on Wednesday had the perennially pissed-off demeanor of the manager who makes you really, really sorry that you asked to speak to him. He is, after all, a former Ohio State wrestling coach (who had absolutely no idea that many of his wrestlers were being sexually abused by a team doctor), and in a more jovial mood I bet he’s ready to get down on the living room floor and have at it on a moment’s notice, at great risk to the china cabinet or the Christmas tree. Did I just explain the no-jacket policy?

Devin Nunes, on the other hand, has been the recipient of numerous Melvins from Jim Jordan. I guess I mean that rhetorically. But even to someone of Jordan’s Ohioan masculine density, Nunes must seem painfully dim. Now the ranking member of a committee he used to chair but never will again, Nunes delivered a vicious but small-minded litany of all the whiny excuses Trump has deployed since before his election: Democrats are pursuing a partisan witch hunt, there was no collusion and no obstruction, the Mueller report was a dud and now the DeepState NeverTrumpers of [checks notes] the Trump administration have cooked up a new pretext for their “scorched-earth war against President Trump.”

Perhaps more to the point, Devin Nunes is suing a cow. OK, not a real cow, but someone who is pretending to be one of his cows on the internet. Nunes used to be a dairy farmer in Tulare County, California, you see, and apparently he’s sensitive about that. I have spent a lot of time in rural California and have been to Tulare County. Other places that aspire to be known as “the middle of nowhere” or perhaps “West Bumblefuck” can only bow down in wonder. There are cows there and apparently none of them is actually using Twitter to mock Devin Nunes, who either does or does not grasp that suing an imaginary cow is the most Devin Nunes thing imaginable.

But I digress. The central premise of “Dialectic of Enlightenment” is that the 20th-century notion of progress, in which we move from the age of myth (meaning religion and superstition and so on) into the age of Enlightenment, when the light of reason shines upon all mankind and we put away childish things and everything’s up to date in Kansas City, is pretty much an illusion. It’s not that Horkheimer and Adorno were against the Enlightenment, by any means. The way they put it is that myth always contained a form of enlightenment (a functional way of understanding the world) and the age of Enlightenment created its own self-justifying myths. They had only recently left Germany, a nation known around the world for its poetry, philosophy and music that was pretty much the apex of Enlightenment Europe until, oh, around 1933 or so.

I can see Jim Jordan eyeing me impatiently, considering a takedown that might endanger many of his Gammy’s Hummel figurines. What I’m saying, Congressman, is that your party has completely abandoned any pretense of “conservative” thought or ideology and has weaponized an extreme form of nihilism in service to a corrupt, mendacious and overtly racist president. If Americans haven’t already grasped that Republicans place no value on facts or truth or any consistent shared notion of objective reality, that should have been made clear to anyone who watched Wednesday’s hearing.

This was absolutely an attack on the underlying values of the Enlightenment, an exercise in “deconstruction” and postmodern relativism more sweeping than anything contemplated by Jacques Derrida or his even more indecipherable critics and acolytes. It went far beyond the observation that Adam Schiff and the Democratic majority doggedly tried to pursue the facts (yes, garnished with doses of political spin) while Republicans told a bunch of lies. We’re all used to that by now. But Republicans didn’t even try to tell the same lies, or even to pretend with any sincerity that their lies were true. Their point, if we can call it that, was everywhere and nowhere, both grand and meaningless: Consistency is not a virtue, truth is whatever we make up on the spur of the moment, everything is basically bullshit.

Some Republicans on the committee bought partway into Trump and Rudy Giuliani’s painfully elaborate conspiracy theories about how the Ukrainians hacked the Democratic Party in 2016 and blamed it on the Russians, with help from renegade Trump-haters in the CIA and the FBI. (Or something! Who gives a shit?) Others argued precisely the opposite, skipping over that part entirely and arguing that no one had ever supported the Ukrainian government more vigorously, or armed its patriotic struggle against Russian oppression more forcefully, than Generalissimo Donald Trump, scourge of corruption and defender of freedom. We were reportedly and scornfully told that the Obama administration had given the Ukrainians blankets — as if they were a bunch of girly-men who couldn’t handle the cold! Have they no borscht? No vodka?

So who are we blaming for the computer hacks and data dumps and social-media agitprop of 2016, exactly? Is Ukraine a nation of devious NeverTrumpers and bedroom-dwelling computer geniuses, with Hillary Clinton’s email server stashed in a pit below the turnip cellar? Or a nation so deeply grateful for the Trump administration’s limitless generosity that it almost (but not quite!), and entirely of its own accord, launched multiple investigations of things that had not happened? There’s simply no way to know these things — or to know anything — in a world where a servant of the people can be so cruelly abused by an imaginary cow.

All this creates a perplexing dilemma for the Democrats, or what in Cultural Marxism groupthink seminars we might have called an epistemological crisis. I don't see any real argument that Adam Schiff and his forces should do something other than they’re doing, which is to build a careful case against Donald Trump based on factual evidence, constitutional authority, due process, the rule of law and whatever other homilies you want to throw out there. I mean, they're Democrats: More or less well-intentioned pedantry, with a side of smug, is what they do.

But what if all that stuff is just pathetic and lame and totally doesn’t work anymore? Democrats are running the risk of becoming straight men to a grand, dark cosmic joke: If the prosecutor in the impeachment proceedings is Atticus Finch, the defense attorney is Cthulhu.

The other thing that kept going through my mind during the first day of impeachment hearings was Bob Dylan’s great 1968 song “All Along the Watchtower,” which Jim Jordan has probably heard at some point. (I’m not crediting Devin Nunes with any cultural breadth whatever. “What a Fool Believes” by the Doobie Brothers? Possibly that.)

As with most Dylan songs, the actual points of reference for “All Along the Watchtower” are obscure, but it’s clearly a testament to the social and cultural disorder of its moment. An especially adept conservative might tell us it captures the mood after the spreading virus of cultural Marxism has worked its dark magic.

“There must be some way out of here,” said the joker to the thief
“There’s too much confusion, I can’t get no relief
Businessmen, they drink my wine, plowmen dig my earth
None of them along the line know what any of it is worth”

The question we face with the impeachment of Donald Trump in 2019 is not whether the president is guilty of various “high crimes and misdemeanors.” Everybody knows the answer to that — with the possible exception of Devin Nunes, who thinks it is not all that funny that Jim Jordan keeps putting weird things in his shampoo. The question is more along the lines of whether there’s some way out of here, and what any of this is worth.