Don't fall for Trump's false dichotomy: It's not a choice between human lives and the economy 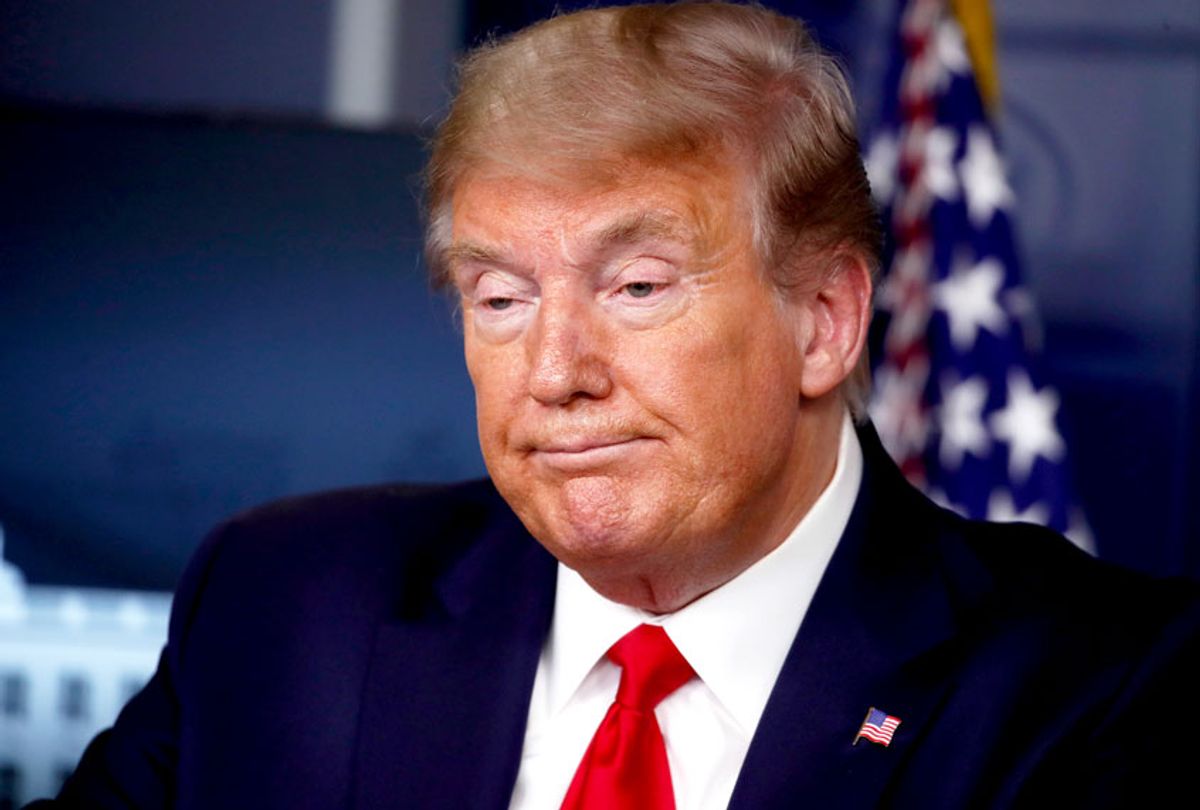 Donald Trump and his allies desperately want people to believe there's a conflict between saving lives and saving the economy. In Trump's daily propaganda dump disguised as a "coronavirus briefing," the runner-up in the 2016 popular vote spends much of his time fantasizing about how he will soon "reopen" the economy and hinting that governors have overreached by instituting mandatory lockdowns to prevent the coronavirus from spreading. Republican politicians are assisting Trump is promoting this vapid dichotomy, demanding congressional investigations into the shutdowns and claiming that letting people die is a reasonable price to pay for (supposedly) rescuing the economy.

This effort at pitting lives against jobs is bolstered, of course, by Fox News and other right-wing pundits, who are hyping the idea that we need to let the coronavirus run rampant through the country in order to save the economy. Over the past week, right-wing astroturf groups linked to the DeVos family and other big donors have staged anti-lockdown protests, aimed at reinforcing this economy vs. lives framework. Trump and Fox News unsurprisingly jumped in, cheering on the protesters and using these tiny groups of knuckleheads as evidence that the country must make a stark choice

Spoiler alert: This "choice" between saving lives and saving the economy is a false dichotomy. In fact, it isn't a choice at all. You can't do one without the other.

For one thing, there's simply no way to "reopen" the economy without first containing the virus. The scenario Trump is envisioning, where the coronavirus spreads rapidly without impacting daily life — especially work — is a childish fantasy. Letting the virus run rampant so millions more people get sick will, in itself, crash the economy. We can't sideline all the people who will get sick and catastrophically overload the health care system without causing severe economic damage. As bad as this lockdown is for the economy, the economy will probably be much worse off if it's lifted prematurely.

More importantly, we already know how to save lives and rescue the economy: A combination of mass testing, of the sort used in South Korea, and a massive government bailout on the scale of a new New Deal.

Donald Trump, to this point, opposes all the strategies that we know would allow us to restart the economy. Mass testing would make a huge difference, but Trump hates that idea, because he wants to keep the numbers of confirmed COVID-19 cases artificially low, which he thinks will help his re-election prospects. A large-scale government bailout of workers is a non-starter for Republicans, who believe government should only go deeper into debt in order to make the richest people a whole lot richer.

But Trump, while a stupid man in most ways, understands one thing keenly, which is that the mainstream media loves a conflict, especially one that causes delicious-sounding ethical debates, such as an existential choice between saving human lives and saving the American economy. So they are far too willing to adopt Trump's framework, even though the actual evidence shows there's really no conflict at all.

All weekend long, the news shows adopted this lives-vs-the-economy framework, challenging one Democratic politician after another about which we should choose.

Unfortunately, some Democratic politicians took the bait. Michigan Gov. Gretchen Whitmer — whose state was hit hardest with the astroturf protests — quipped on "Good Morning America," "It's better to be six feet apart right now than six feet under."

This kind of rhetoric makes liberals feel good about how righteous they are, but ultimately it could backfire. If the lockdowns work, then the death toll will fall short of the worst projections — but the unemployment rate will still be at eye-popping levels. Voters may start to feel swayed by conservative claims that saving lives wasn't worth the economic damage.

For that not to happen, leading Democrats and the media need to stop reinforcing Trump's false dichotomy, and instead reframe the discussion in terms of how you simply can't rescue the economy without defeating or containing the pandemic first.

One way to do that is to refocus the discussion on the fact that Trump himself is the main reason for this economic catastrophe, since he has he's slow-walked the mass testing that is the only realistic path toward a society where people are willing and able to go out in public without fear of severe illness and death.

House Speaker Nancy Pelosi modeled how to do this on "Good Morning America," declaring that Trump's embrace of the protests was a "distraction" from the real problem, which is that his administration "has not appropriately done testing, treatment, contact tracing and quarantine."

"The key that opens the door to the economy is testing, testing testing," Pelosi added.

Virginia's Democratic governor, Ralph Northam, also did a good job in a CNN interview, responding to Trump's provocations by saying, "Our president has been unable to deliver on tests."

That's the best way to sidestep the false dichotomy between saving lives and saving jobs. Democrats need to emphasize that one cannot be done without the other, and that Trump and the Republicans are the main obstacle to both goals. Indeed, it would be much better if Democrats would hammer home phrases like "false choice" and "false dichotomy" and scold reporters for accepting Trump's false premise that we can somehow save the economy before the virus is even remotely under control.

In reality, it's Democrats, not Republicans, who are focused on doing what it takes to fix the economy. The Democratic-controlled House is moving to pass another coronavirus aid package on Wednesday. Aid of that sort will be far more effective at boosting the economy than Trump's harebrained notions about "reopening," which will only cause a sharp spike in disease that would result in more economic damage. These protests and Trump's fantasies about magically relaunching an economic boom are pointless distractions from the real work that Democrats are actually doing to help people both survive and thrive.

Honestly, it's not even clear that Trump actually wants the economy "reopened." He talks a big game and encourages these moronic protests, but his administration has continued to officially support the state lockdowns.

For Trump, it might be even better if "reopening" remains a fantasy. If he actually pulled it off, his supporters might be forced to see with their own eyes that letting millions of people get sick only makes things worse, and is nothing like the economic boon their orange master promised.

But both the press and Democrats must stop rolling over for Trump's propaganda push. A healthy economy requires a healthy public. There's no way to return to "normal" if millions are sick and people are too afraid to use public transportation, go to stores and restaurants, or travel.

Instead of playing along with Trump's false dichotomy, journalists, pundits, and Democratic politicians need to relentlessly remind the public that economic recovery is physically impossible without containing the virus. If people believe there really is a choice between saving lives and saving jobs, they may start desperate enough to choose the latter. It's always easy to believe you won't be the person who dies of COVID-19.

The only way to fight back is to make it clear to voters that jobs won't come back — and literally can't come back — without containing the virus. There is no "normal" life when millions are sick. Donald Trump is simply lying, as usual, when he says otherwise.