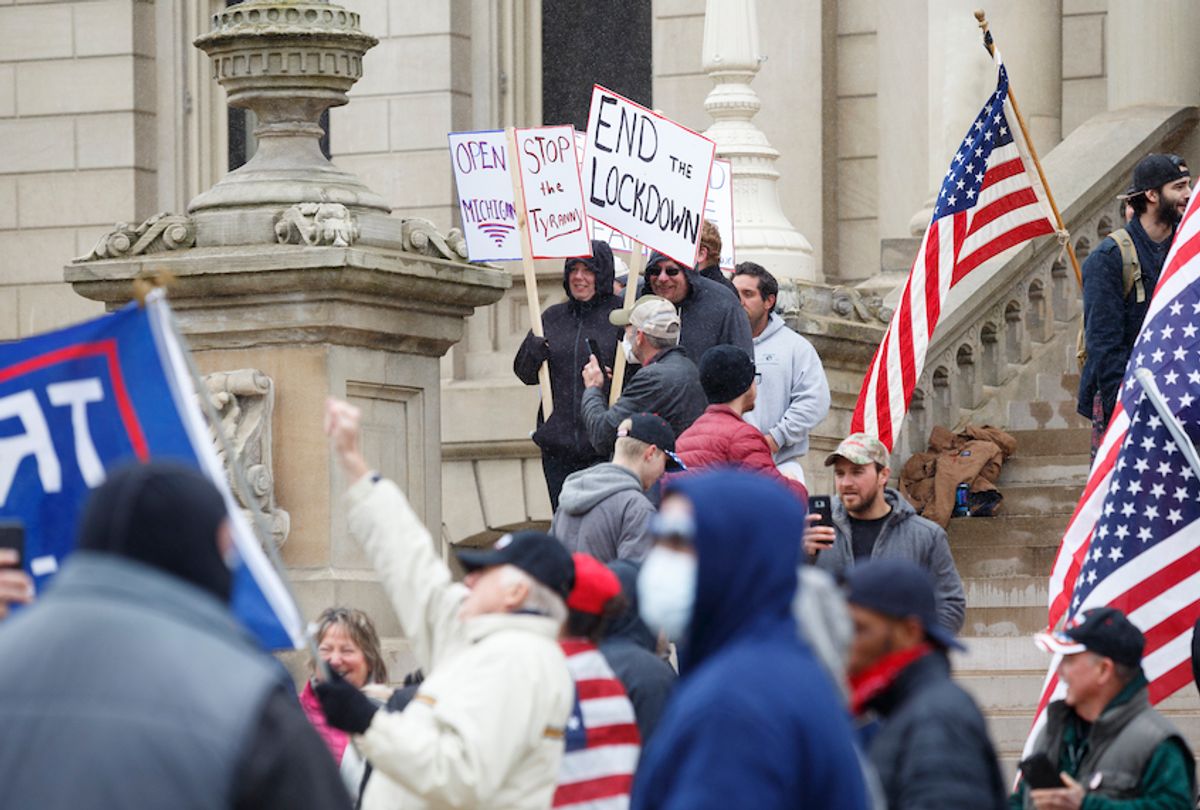 Protesters rallied around the country this week against stay-at-home orders forcing nonessential businesses to shut down, but Michigan's governor warned that they may have backfired by creating "a need to lengthen" the lockdowns.

Protesters in at least six states planned to protest restrictions aimed at containing the spread of the new coronavirus this week. In Michigan, a conservative group linked to Education Secretary Betsy DeVos' family organized "Operation Gridlock" to protest restrictions on nonessential businesses and Gov. Gretchen Whitmer's recent order barring travel between homes. The state is among the hardest-hit by the coronavirus pandemic, reporting more than 27,000 confirmed cases and 1,909 deaths.

Some protesters, several of whom wore pro-Trump gear, gathered on the capitol steps as many remained in their cars. Demonstrators chanted "recall Whitmer" and "lock her up," a chant normally usually used by Trump supporters in reference to his 2016 Democratic rival Hillary Clinton.

Whitmer, who has feuded with President Donald Trump over the delayed federal response to the crisis, argued that "it wasn't really about the stay-at-home order at all."

"It was essentially a political rally — a political statement that flies in the face of all of the science and all of the best practices from the stay-at-home order that was issued," the Democrat told MSNBC on Wednesday.

Whitmer said the cars "were blocking one of our hospitals, so an ambulance literally wasn't able to get into the bay for ten minutes."

"We know that this demonstration is going to come at a cost to people's health," she said. "The sad irony of the protest is that they don't like to be in this stay-at-home order, but they might have just created a need to lengthen it."

Other states saw smaller protests against the coronavirus restrictions.

Kentucky Gov. Andy Beshear, a Democrat, had his news briefing interrupted Wednesday by dozens of protesters. The small group chanted, blew horns and shouted into a megaphone to drown out the governor's comments. The protesters chanted "we want to work" and "facts over fear."

Scientists and business executives alike have repeatedly argued that the economy cannot simply reopen if the risk of infection remains high.

"We do have some folks up in here in Kentucky today – and everybody should be able to express their opinion – that believe we should reopen Kentucky immediately, right now," Beshear said at the briefing. "Folks, that would kill people. That would absolutely kill people."

Dozens of protesters also gathered outside of Ohio Gov. Mike DeWine's Monday news briefing to call for an end to the state's stay-at-home order. DeWine, a Republican, has also received criticism from his own party for issuing a stay-at-home order, according to the Columbus Dispatch.

DeWine told MSNBC that he would not reopen the economy until medical experts deem it safe to do so.

Dozens of individuals also gathered in Utah to protest the business closures, carrying signs like "Resist like it's 1776" and "America will never be a socialist country," according to KSL-TV.

The state's stay-at-home order was set to expire this week, but Gov. Gary Herbert, a Republican, extended it through May 1.

"I've come to the conclusion that in order for us to slow the spread and to get back on our feet socially and economically, this is not the time" to reopen, he said earlier this week.

At least one protester was arrested in North Carolina after about 100 protesters gathered in Raleigh to protest the state's stay-at-home order. The Raleigh Police Department warned that "protesting is not listed as an essential function."

Gov. Roy Cooper, a Democrat, said Monday that reopening the economy prematurely would be disastrous.

"Some people want to completely obliterate these restrictions," he said. "It would be a catastrophe. The numbers are very clear that the interventions that we've entered into — social gatherings, limitations on bars and restaurants, the stay at home order — those kinds of things are working."

Protesters are also set to demonstrate against the restrictions Thursday in Virginia.

Gov. Ralph Northam, a Democrat, extended the business closures Wednesday through May 8.

"As we have seen from our data and models, social distancing is working, and we are slowing the spread of this virus," he said. "But it is too early to let up. By extending this order to keep certain businesses closed or restricted, we can continue to evaluate the situation and plan for how to eventually ease restrictions so that our businesses may operate without endangering public health."

Former Obama aide Tommy Vietor argued that the protests' ties to conservative groups like the DeVos-linked Michigan Freedom Fund show that the demonstrations are just "astroturf" efforts "paid for by billionaires."

"Using your right to peaceably protest in such a manner as to spread a virus which may endanger your life, the lives of your friends, family and neighbors, and the lives of countless food service, law enforcement and healthcare workers does not make you a patriot," she said. "A 'patriot' is defined as a person who vigorously supports their country and is prepared to defend it against its enemies. The enemy here is the virus-not each other."