Reopening the economy on Easter may kill 1.2 million. Waiting another six weeks would reduce deaths to just 82,300 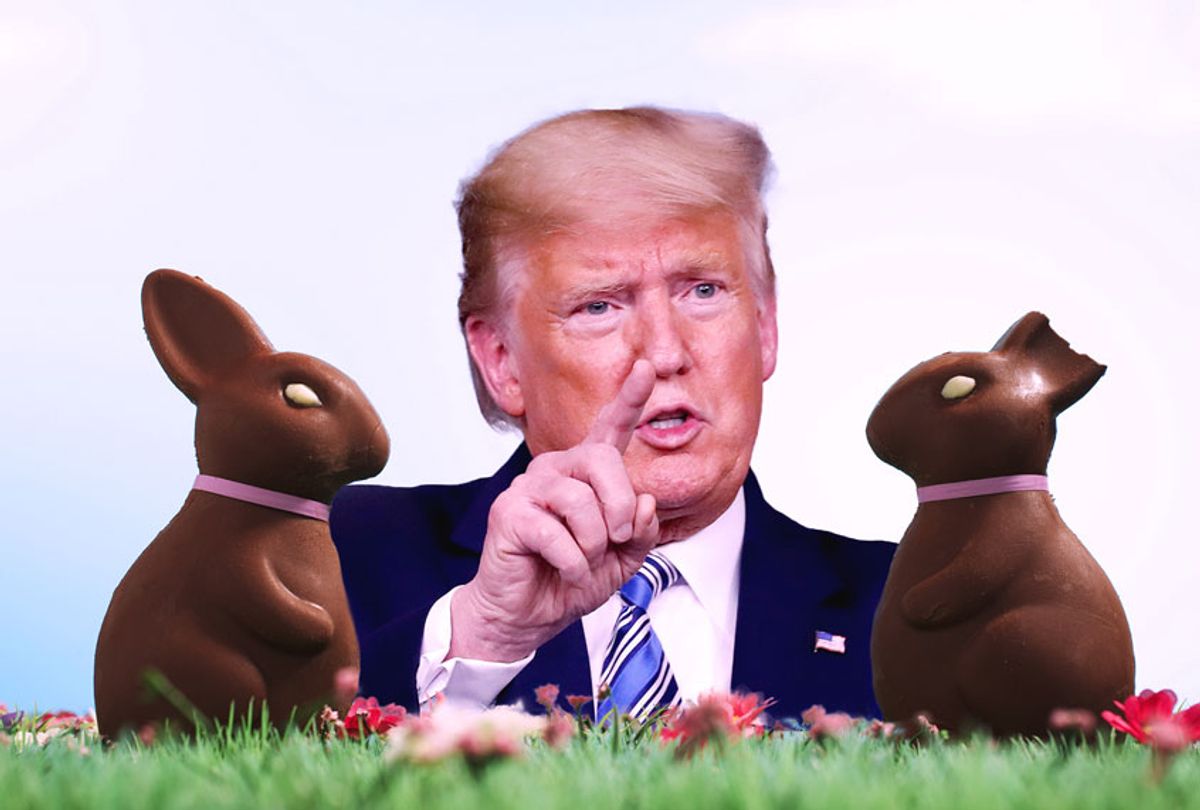 President Donald Trump's plan to lift coronavirus restrictions by Easter against the advice of medical experts would result in hundreds of thousands of additional deaths from the new coronavirus, according to a model epidemiologists built for The New York Times.

Though individual states will make their own calls, Trump says that he wants to ease restrictions intended to slow the spread of the coronavirus and see "packed churches all over our country" on Easter Sunday. But the scientific modeling shows that waiting and continuing closures and restrictions just two additional weeks would save hundreds of thousands of lives. Likewise, keeping restrictions in place for two months could prevent 1 million deaths.

But if the restrictions were kept in place for 30 days, the number of infections would fall to 75 million, resulting in 717,600 deaths, according to the model.

"These numbers offer a false precision, for we don't understand Covid-19 well enough to model it exactly," wrote The Times' Nick Kristoff and Stuart Thompson. "But they do suggest the point that epidemiologists are making: For all the yearning for a return to normalcy, that is risky so long as a virus is raging and we are unprotected."

Dr. Tom Inglesby, a health security expert at Johns Hopkins University, told The Times that anyone calling to ease social distancing restrictions "needs to fully understand what the country will look like if we do that." The virus would "spread widely, rapidly, terribly, and could kill potentially millions in the year ahead, with huge social and economic impact."

Dr. Larry Brilliant, an epidemiologist who runs the group Ending Pandemics, agreed that if restrictions are lifted by Trump's Easter deadline "history would judge it an error of epic proportions."

Dr. Anthony Fauci, the director of the National Institute of Allergy and Infectious Diseases, offered a reality check on Trump's plan during an interview with CNN on Wednesday.

"If you keep seeing this acceleration, it doesn't matter what you say," he added. "One week, two weeks, three weeks — you've got to go with what the situation on the ground is."

Fauci has warned White House officials and Republican lawmakers that restrictions need to be tightened, not loosened, The Washington Post reported.

"It would be a major mistake to suggest any change of course when it comes to containment," Sen. Lindsey Graham, R-S.C., told the outlet. "I just spoke with Dr. Fauci. He believes that, if anything, we should be more aggressive and do more . . . You can't have a functioning economy if you have hospitals overflowing. People aren't going to go to work like that."

The pushback appears to have made an impression. Top White House economic adviser Larry Kudlow, who echoed Trump's call to restart the economy sooner rather than later, admitted that Easter Sunday was an "aspirational target" and "not a hard and fast" deadline.

"We don't want to destroy the economy. On the other hand, we've got to take care of the health and safety of all Americans," Kudlow told The Hill. "To me, the two should go together. They go hand in hand. Health safety; economic safety. Health security; economic security."

But a growing number of conservatives are insisting that helping the economy is worth letting higher numbers of people die.

"No one reached out to me and said, 'As a senior citizen, are you willing to take a chance on your survival in exchange for keeping the America that all America loves for your children and grandchildren?' And if that's the exchange, I'm all in," Texas Lt. Gov. Dan Patrick told Fox News this week.

"Even if we all get sick, I'd rather die than kill the country," Glenn Beck said on his BlazeTV show.

The Wall Street Journal's editorial board made a similar argument last week.

"No society can safeguard public health for long at the cost of its overall economic health, " the editorial board wrote, "Even America's resources to fight a viral plague aren't limitless — and they will become more limited by the day as individuals lose jobs, businesses close, and American prosperity gives way to poverty."

The calls to let higher numbers of people die in order to save the economy have drawn alarm from both Democrats and Republicans.

Peter Wehner, who serves as a senior fellow at the Ethics and Public Policy Center after three stints in Republican administrations, questioned how these conservatives can call themselves "pro-life" while urging policies that will result in mass death.

"There's an attitude toward the elderly of 'Let them eat cake,'" he told The Washington Post. "This is very odd for the pro-life party that for so long it pushed a certain ethic."

"We need to remember that some of the people who are suggesting this are the same people who said there was no problem, and this was just the common cold," Wendy Parmet, a Northeastern University law professor who specializes in health care and bioethics, told Stat News. "Hundreds of people in this country have died since then."

Some of Trump's loyal supporters in Congress have also publicly warned that the president's plan would harm, not help, the economy.

"There will be no normally functioning economy," said Rep. Liz Cheney, R-Wyo., "if our hospitals are overwhelmed and thousands of Americans of all ages, including our doctors and nurses, lay dying because we have failed to do what's necessary to stop the virus."