"Those of us who are 70 plus, we'll take care of ourselves," Dan Patrick says. "But don't sacrifice the country" 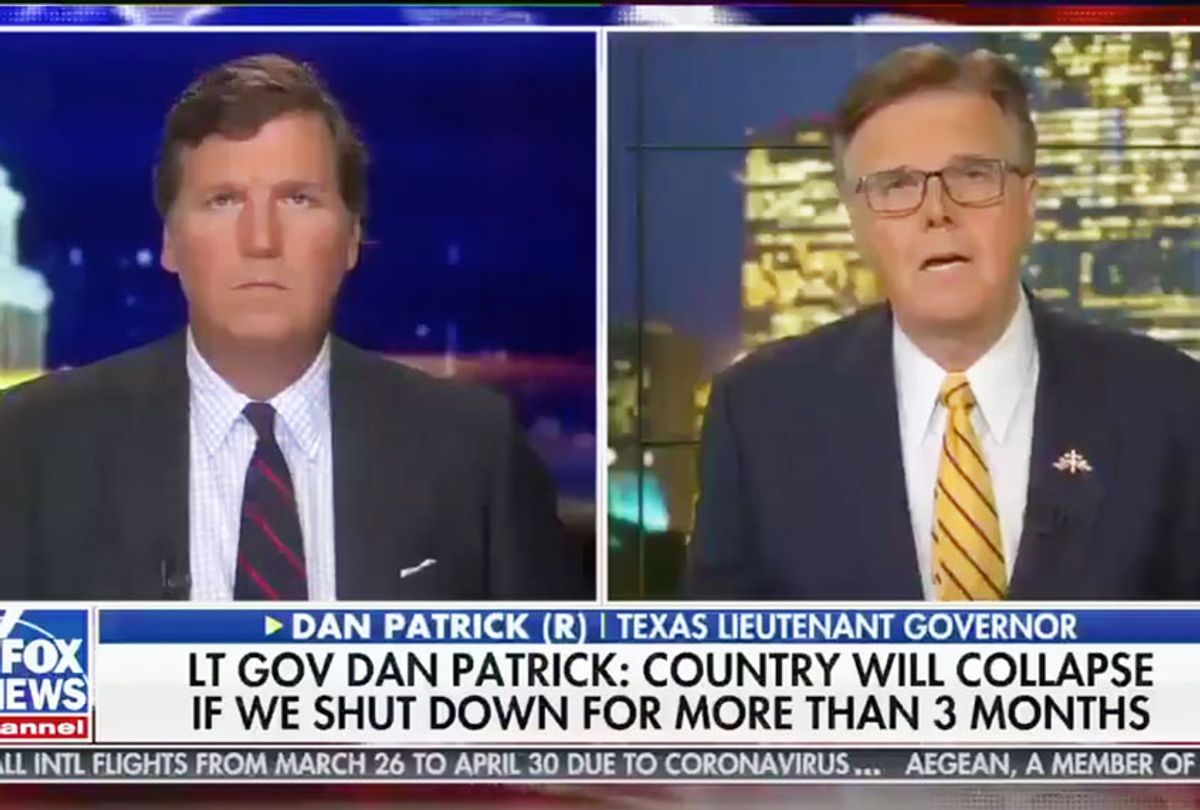 The Republican lieutenant governor of Texas suggested to Fox News host Tucker Carlson on Monday night that the government should prioritizing saving the economy over the lives of senior citizens amid the coronavirus outbreak.

"No one reached out to me and said, 'As a senior citizen, are you willing to take a chance on your survival in exchange for keeping the America that all America loves for your children and grandchildren?' And if that's the exchange, I'm all in," Dan Patrick said to Carlson. "And that doesn't make me noble or brave of anything like that. I just think there are lots of grandparents out there in this country like me — I have six grandchildren — that what we all care about. And what we love more than anything are those children. And I want to live smart and see through this, but I don't want the whole country to be sacrificed."

After claiming that he had spoken to "hundreds of people" who were worried about "an economic collapse," Patrick added that "my heart is lifted tonight by what I heard the president say, because we can do more than one thing at a time."

Trump announced Monday that "we are going to be opening up our country for business, because our country was meant to be open," echoing the frustrations of conservative pundits at the prolonged economic shutdown. The president first revealed Sunday that he would reassess the economic lockdown after a 15-day period, a move experts warned might not be long enough to contain the pandemic.

"My message is: Let's get back to work. Let's get back to living. Let's be smart about it," Patrick said. "And those of us who are 70 plus, we'll take care of ourselves. But don't sacrifice the country. Don't do that. Don't ruin this great American dream."

Carlson then asked Patrick, "You're basically saying that this disease could take your life, but that's not the scariest thing to you? There is something that would be worse than dying." Patrick affirmed that statement.

Carlson and Patrick are not alone in arguing that the economic shutdown has caused more harm than good. New York Times columnist Thomas Friedman wrote Sunday that "either we let many of us get the coronavirus, recover and get back to work — while doing our utmost to protect those most vulnerable to being killed by it. Or, we shut down for months to try to save everyone everywhere from this virus — no matter their risk profile — and kill many people by other means, kill our economy and maybe kill our future."

Friedman's colleague Bret Stephens made the same argument on Friday, writing that if the economy was shut down for months, "we might face not a recession but a full-blown depression, which would be financially ruinous for hundreds of millions and have its own disastrous knock-on effects in mental, emotional and physical health, including for the elderly and sick who already face the greatest risks from the virus."

Dr. Eric Feigl-Ding, epidemiologist and senior fellow at the Federation of American Scientists, warned against such logic in an interview with Salon.

"I think public health always needs to come first, because this epidemic, if we keep it unchecked, will actually do way more harm to our economy in terms of health care costs, in terms of suffering to the labor force, in terms of so many other economic and dimensions of health care," he said Monday. "I think we have to pay some short-term pain for long-term gain here. And I only wish we had done this sooner, because it's like a wildfire. If you let the wildfire get out of control, you're going to have to throw away more resources around it and do a lot more painful things."