Viewers of Sean Hannity more likely to die from COVID-19 than those of Tucker Carlson: study

Viewers of Hannity, who initially downplayed the threat of COVID-19, had a higher death rate than those of Carlson 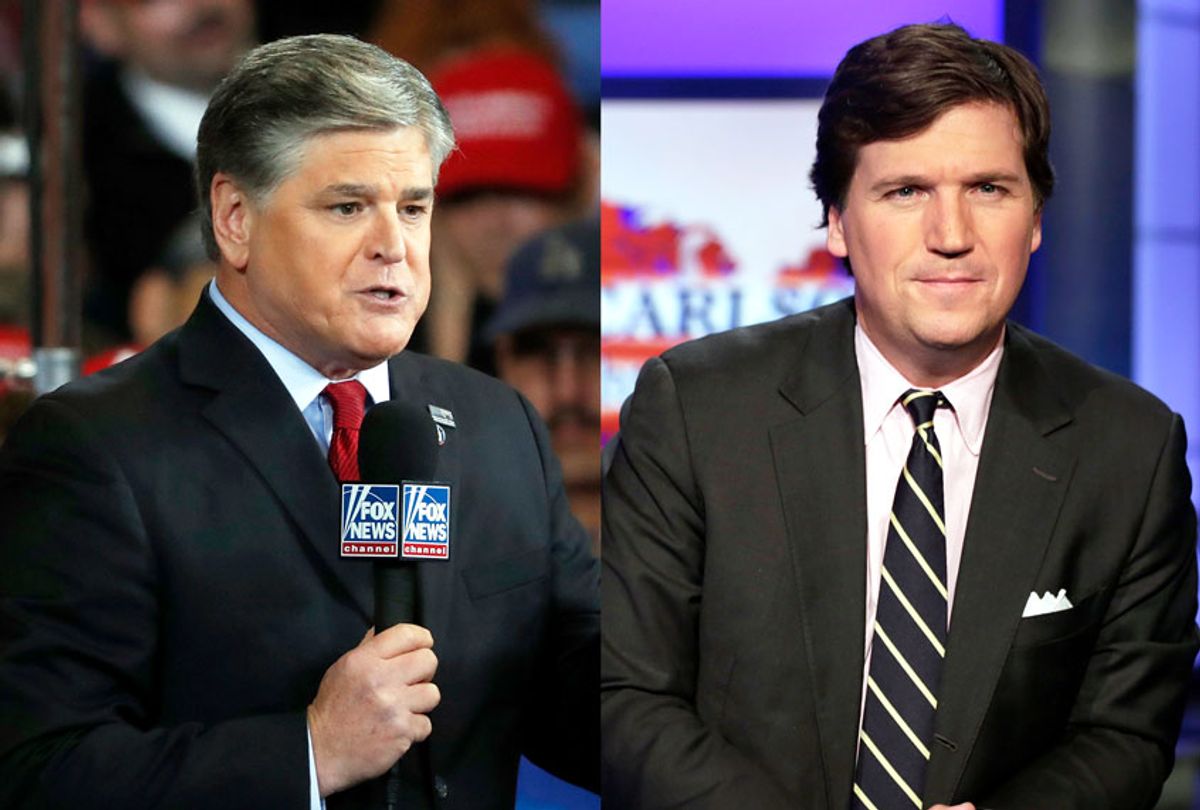 This article has been updated with a statement from Fox News.

A new study from the University of Chicago's Becker Friedman Institute for Economics found that "greater viewership of 'Hannity' relative to 'Tucker Carlson Tonight' was strongly associated with a greater number of COVID-19 cases and deaths in the early stages of the pandemic."

Fox News host Sean Hannity has been heavily criticized for echoing President Donald Trump's initial attempts to downplay the threat posed by the new coronavirus. Meanwhile, Tucker Carlson, his colleague at the right-leaning network who has framed the issue in more nationalistic terms, has been credited with convincing the president to take the pandemic seriously.

"Carlson warned viewers about the threat posed by the coronavirus from early February, while Hannity originally dismissed the risks associated with the virus before gradually adjusting his position starting late February," the researchers wrote in the working paper.

The two hosts diverged greatly on the issue in February. While Hannity expressed optimism that "zero people in the United States have died from the coronavirus," Carlson warned viewers that the virus could kill 1 million people across the country.

The researchers commissioned a poll of more than 1,000 Fox News viewers, which found that Carlson's viewers were more likely to change their behavior earlier than Hannity's viewers.

The researchers then compared the death rate in counties that favored either host, finding "approximately 30% more COVID-19 cases" in areas that preferred Hannity than those that watched Carlson.

"Already by mid-March, we see a statistically significant difference — that there are greater case loads in places that favor Hannity over Tucker," researcher David Yanagizawa-Drott told The Chicago Tribune. "Then weeks later, we see a similar trajectory increase for deaths."

After Hannity's "shift in tone," however, "the diverging trajectories . . . began to revert," the study said.

The researchers argued that their findings were consistent with "misinformation being an important mechanism driving the effects in the data."

Polls have similarly found that Fox News viewers as a whole are far more likely to believe the threat of the virus is exaggerated. Another poll showed that Republicans, in general, were less likely to change their behavior in response to the threat than Democrats.

The attempts by certain Fox News opinion hosts to downplay the virus early in the outbreak came in stark contrast to steps the network's executives and owners took to protect themselves against the virus.

"The selective cherry-picked clips of Sean Hannity's coverage used in this study are not only reckless and irresponsible, but down right factually wrong," a spokesperson for Fox News said in a statement. "As this timeline proves, Hannity has covered Covid-19 since the early days of the story. The 'study' almost completely ignores his coverage and repeated, specific warnings and concerns from January 27-February 26 including an early interview with Dr. Fauci in January. This is a reckless disregard for the truth."

Hannity likewise defended his coverage of the virus in an interview with Newsweek earlier this month, arguing that his January interview with Dr. Anthony Fauci, the top infectious disease expert in the country, showed that his viewers were getting accurate information.

"Go to my web site, and you'll see irrefutable evidence that I have taken this seriously way before most in the media did. I warned in January that it was dangerous because it was highly contagious, but some people were asymptomatic, so it would spread quickly," he said, though he also argued months later that the flu was "much more dangerous" than the new coronavirus and compared the associated death rate to the murder rate in Chicago.

Hannity's comments came in response to a letter from 74 journalism professors to Fox owner Rupert Murdoch and CEO Lachlan Murdoch calling on the network to stop spreading "misinformation" about the virus.

"The misinformation that reaches the Fox News audience is a danger to public health. Indeed, it is not an overstatement to say that your misreporting endangers your own viewers — and not only them, for in a pandemic, individual behavior affects significant numbers of other people as well," the letter said. ". . . Inexcusably, Fox News has violated elementary canons of journalism. In so doing, it has contributed to the spread of a grave pandemic. Urgently, therefore, in the name of both good journalism and public health, we call upon you to help protect the lives of all Americans — including your elderly viewers — by ensuring that the information you deliver is based on scientific facts."