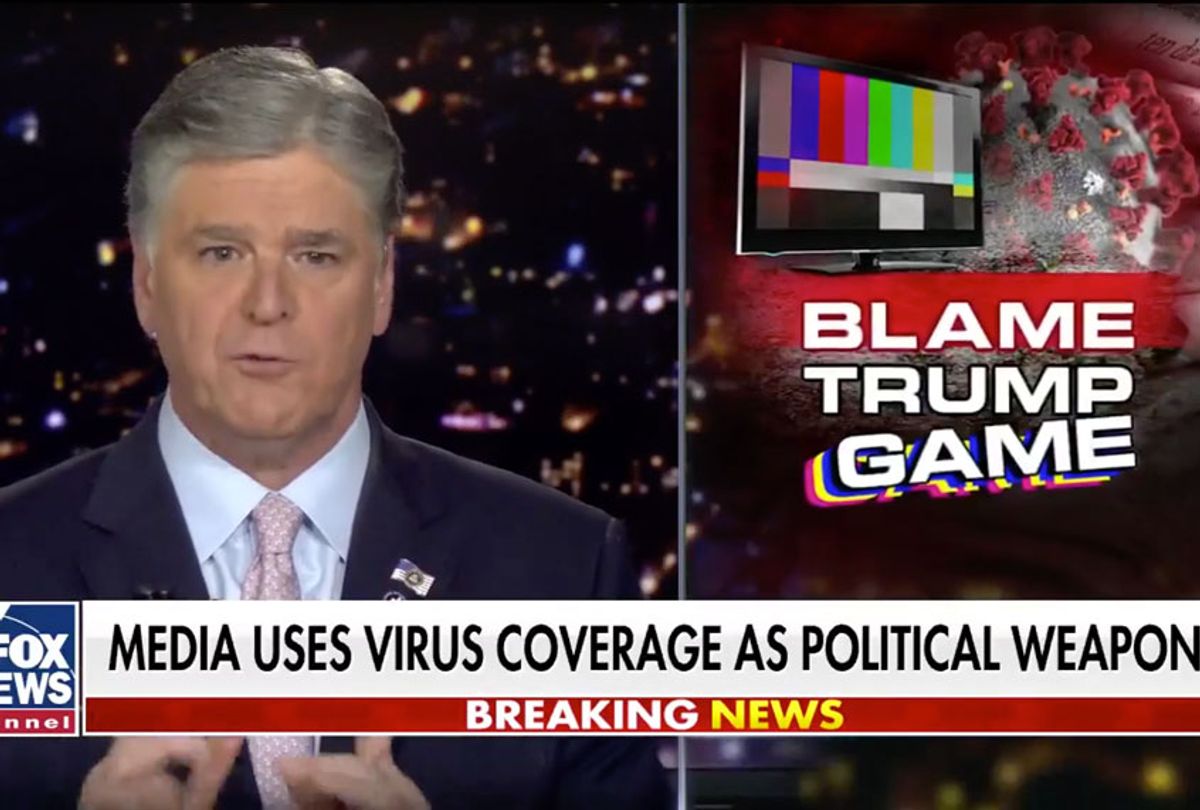 Fox News announced the cable channel's response to the COVID-19 "crisis" in an internal memo urging employees to prepare for the worst as some of its biggest stars downplayed the threat of the novel coronavirus to viewers.

The network told its employees that it was "instituting telecommuting," reducing studio bookings, canceling the audience of "The Greg Gutfeld Show" and "reducing the staff footprint at our headquarters" in response to the virus, according to a copy of the memo obtained by CNN's Oliver Darcy.

"Various departments have also been asked to cancel all in-person meetings and summits and conduct business via Skype or by phone. We have also limited outside vendors from entering the building," Fox News CEO Suzanne Scott and network president Jay Wallace said in the memo. "Programming changes will be enacted in the coming days on some of our platforms — our programming leadership team is working on this now and will communicate that accordingly."

The memo went on to describe the pandemic as a "crisis" despite network hosts' dismissals of prior warnings as "mass hysteria."

"Please keep in mind that viewers rely on us to stay informed during a crisis of this magnitude, and we are providing an important public service to our audience by functioning as a resource for all Americans," the memo said.

The memo comes as President Donald Trump faces heavy criticism for repeatedly trying to downplay the threat of the virus, which has exploded in the U.S. but has been impossible to fully track due to delays and limitations with testing. Some of the network's pro-Trump hosts have similarly tried to convince viewers that concern over the spread of COVID-19, which has killed at least 41 people in the U.S. and more than 4,900 people around the world, is just a media plot to smear the president.

Fox Business host Trish Regan claimed Monday that the coverage of the administration's botched response to the spread of COVID-19 was like "impeachment all over again."

"This is yet another attempt to impeach the president, and sadly, it seems they care very little for any of the destruction they are leaving in their wake," she said, accusing the "liberal media" of using the pandemic to "demonize and destroy the president."

Regan's comments came shortly before Dr. Anthony Fauci, the director of the National Institute of Allergy and Infectious Diseases, acknowledged to Congress that the Trump administration failed to meet the capacity for COVID-19 testing in the U.S. The U.S. has tested fewer people per capita than almost every developed country and has tested fewer people in total than South Korea regularly tests in a single day.

"The system is not really geared to what we need right now," Fauci told Congress on Thursday. "That is a failing. Let's admit it."

Fox News host Sean Hannity, Trump's biggest defender on the network, declared this week that he is "over" it.

"If you are over the mass hysteria, if you're over politicizing and weaponizing of the coronavirus, you are not alone," he declared.

Hannity compared the coronavirus death rate to that of the flu, which has a far lower death rate. But one day earlier, Fauci said live on Hannity's show that COVID-19 is 10 times deadlier than the flu.

Hannity also echoed Trump's claim that concern over the outbreak was a media "hoax."

"In the end, the mob in the media — well, they will be advancing their new conspiracy theory and their newest hoax," Hannity said Wednesday. "The coverage we are seeing from the media and the mob is beyond despicable and political."

Fox News host Laura Ingraham similarly complained about media "panic pushers," while colleague Pete Hegseth falsely claimed that Democrats and journalists were "rooting" for the virus to "drag down the presidency of Donald Trump."

And the false and inaccurate claims weren't only disseminated by the network's opinion hosts. News anchor Martha MacCallum also compared COVID-19 to the flu without noting that it kills at a far higher rate.

"You know, when you think about how many people die of the flu and everyone just goes about their business — 30-something thousand people. And this situation — you are just wondering," she said Monday.

The flu has a death rate of 0.1%, while COVID-19 has a current death rate of 3.4%, according to the World Health Organization. However, experts expect that number to go down as more unreported mild cases are identified.

"The mortality for seasonal flu is 0.1%, so even if it goes down to 1%, it's still 10 times more fatal," Fauci told Congress this week.

Fox News host Jeanine Pirro, an outspoken supporter of the president, tried to spin this fact.

"Now, they say the mortality rate for coronavirus is higher than a flu," she said Saturday. "But consider though, that we have a flu vaccine. And yet, in 2019, 16,000 Americans died from the flu. Imagine if we did not have the flu vaccine. The flu would be a pandemic. So all the talk about coronavirus being so much more deadly doesn't reflect reality. Without a vaccine, the flu would be far more deadly."

But there has been a flu vaccine since the 1930s, and there is not one for COVID-19. Despite Trump's claims that a vaccine could be available "over the next few months," Fauci explained in a televised meeting with the president that such a timeline was impossible.

"You won't have a vaccine. You'll have a vaccine to go into testing," Fauci said, adding that a vaccine would not be available to the public for "a year to a year and a half."

The leaked internal memo shows that the network has told its staff very different things than its on-air hosts did to viewers, who are on average around 65 years old and have a higher risk of severe illness from the virus.

Even some Fox News staffers have complained that the network's coverage could harm their very own viewers.

"The attempt to deflect and blame the media and Democrats," one Fox producer told CNN's Brian Stelter, "from Trish Regan, Sean Hannity, Laura Ingraham, Lou Dobbs, Jesse Watters and Greg Gutfeld — instead of addressing the coronavirus — is really irresponsible and hazardous to our viewers."