What chimpanzees (and primitive cultures) could teach Trump about leadership 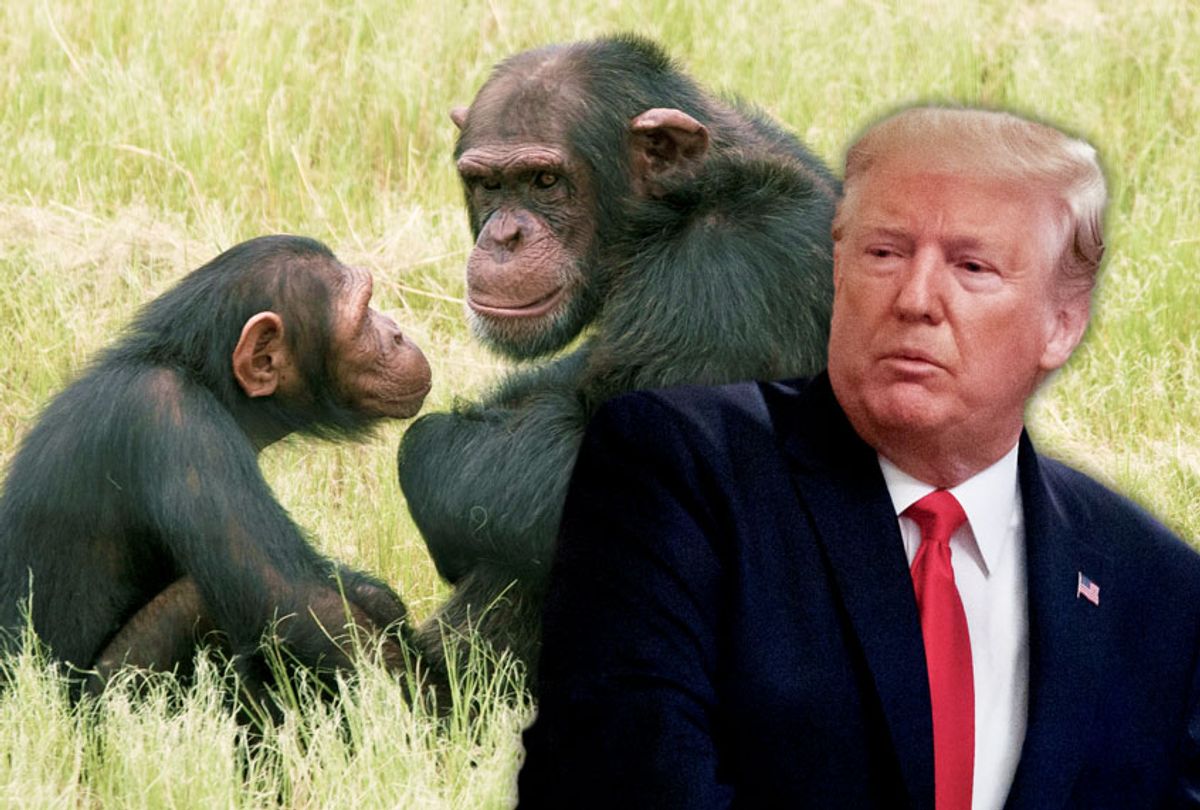 In this time of global pandemic, when life and livelihoods are under threat and our normal routines are on pause, it seems useful to stop and consider what kind of leadership America has, circa 2020.

When I reflect on leadership, what first comes to mind is the clang and bang of a stick in hand smashing against a metal garbage-can lid. It's the story of a chimpanzee in the wild who gets his hands on that cymbal-like object — something not of his world, but belonging to the humans observing him — to create a sound-spectacle that led to his artificial rise in the group's dominance hierarchy. In a sense, he was a fake "alpha animal." He made a ruckus and harassed other chimps, but didn't do anything in the service of the group.

Such artificiality is in contrast to normal chimpanzee life, in which an Alpha's primary function is to provide a direction for achieving group security and for establishing a relatively peaceful coexistence between members. For the most part, chimpanzee life is occupied with foraging, grooming each other, taking care of the young and relaxing. Yes, an approach by the Alpha can spatially displace another, usually without a serious confrontation. However, the assumption of chimpanzee life — unlike, say, in hamadryas baboon societies — is not that every approach by another is a potential do-or-die threat. Of course, chimps have minor skirmishes and, as we now know, in rare instances also exhibit cannibalistic behavior when winning a fight with a chimpanzee from a rival group who threatens territory. Normally, however, everyday life is not one of defensive hyper-vigilance. There is not a great deal of spectacle surrounding the dominant one. More typical is to see group members checking in with an Alpha simply by orienting to him. His power is more assumed than constantly tested, and that power is expected mostly to benefit the group. If he fails at establishing this regard, it's typical that beta-males and high-status adult females will eventually act to usurp or rehabilitate him.

Fake or incompetent chimpanzee leaders are rare, and when they appear they don't last long. In chimpanzee life there is no offstage, no speechwriters and no teleprompters. There are no Michael Cohens or Paul Manaforts.

The second leader I think about when thinking about leadership is a human: Franklin Delano Roosevelt. Unlike Jimmy Carter, who rejected the trappings of the presidency and lost some support for doing so, FDR was a man who loved the pomp and circumstance surrounding the American presidency. But he was also the kind of leader who exhibited great courage and empathy at a crucial time in American history, between the Great Depression and the Second World War. FDR created the New Deal because he was the real deal — a good leader. Only after Carter's presidency, when he became a widely admired philanthropist, did his star rise again. FDR's popularity has remained constant over time.

Ronald Reagan, on the other hand, was a variation on the dimension of fake-to-real. Reagan's true nature was that of a performer. As a staunch anti-communist he was nevertheless able to take "a walk in the woods" with Mikhail Gorbachev and admonish him in Berlin, "Mr. Gorbachev, tear down this Wall" — both actions helping to thaw the Cold War.

Yet Reagan was a man who believed — or half-believed — that because he had played a World War II fighter pilot in a B-movie, he really was such a warrior. In all his expressions, Reagan was aided by his speaking voice that sounded as if it embodied the words, "Amber waves of grain." Speaking at Normandy for the 40th anniversary of the D-Day invasion, when Reagan referred to the "Boys of Pointe du Hoc" — the men who scaled the cliffs — and called them "the best damn kids in the world," he, for a moment, became the father of our country. He had that kind of natural performance skill that was an authentic display of who he was. Reagan as a fake-real, a fighter pilot in a B-movie, took center stage in real life as the leader of the free world. History alone can evaluate Reagan's accomplishments as Alpha.

Lastly, my mind of course veers to that square peg we now have in our Oval Office, Donald J. Trump. With Trump it's always "Me First," not America first. In that way, he is being his true self, but his true self is callous, selfish and greedy. He's real, but a fake leader, He's not the good kind of leader: smart, strong and kind. Trump sure makes a lot of noise, and now in addition to his usual tweet scaldings, he has his daily televised coronavirus briefings, spewing out his lies, misperceptions and, perhaps, self-deceptions.

Instead of promoting unity, Trump often pits one group of Americans against another. Moreover, he is hyper-vigilant for personal slights and compliments, and those seem to take priority over scanning the world for real or potential risks to our Constitution and national security. Chimpanzees would find President Trump poor at leadership.

Trump rightfully wants to provide hope to the American public, but in this time of pandemic, that cannot come at the price of denying science. It can be said that the primary survival strategy of primal life is minimizing loss before maximizing gain. Truth and wisdom in the service of "the people" counts more than hoped-for votes and pats on the back. Wisdom implies the ability to deal with complexity and contradiction, not seeing everything in black or white terms. Trump's default setting is, "If you're not for me you are against me." In contrast, in primitive tribes one can sometimes observe rituals of temporary status reversal, in which group members mock and ridicule their leader as a way to both seriously and playfully let off some steam. Trump would not be able to tolerate such a break in power relations. He demands submissiveness and has no sense of playfulness. Have you ever seen Trump smile, save when he thanks his minions for attending his rallies?

The primal world is adapted to Its environment

The leaders of primitive tribes learn from the oral history of their group and are deeply embedded in and adapted to their environment. They know how to "read" the forest and see telltale indicators of what is not visually manifest. These people live with their feet on the ground. They have not created the technologies to land a fellow tribesman on the Moon. Nevertheless, for all the hardship endured by being totally exposed to nature, primitive people have a certain calming certainty in the world they inhabit. That is something we moderns, so removed from direct experience of our environment, can't appreciate. What we could appreciate, perhaps, is the ability to say about our next president what one New Yorker recently said about her building's doorman, who had died from the coronavirus: "He was a mensch who appreciated the ironies." That says a lot. If chimpanzees spoke English, they would know that says a lot, too.

Bob Deutsch holds a Ph.D. in cognitive neuroscience. He has studied chimpanzees while supported by the New York Zoological Society and taught anthropology at the City University of New York. Before spending a decade as a State Department analyst, he studied preliterate tribes in Irian Jaya and Amazonia. He has written for the Chicago Tribune, the Atlanta Journal-Constitution, HuffPost and Forbes, and has appeared on ABC's "Good Morning America" and PBS' "Rights & Wrongs."