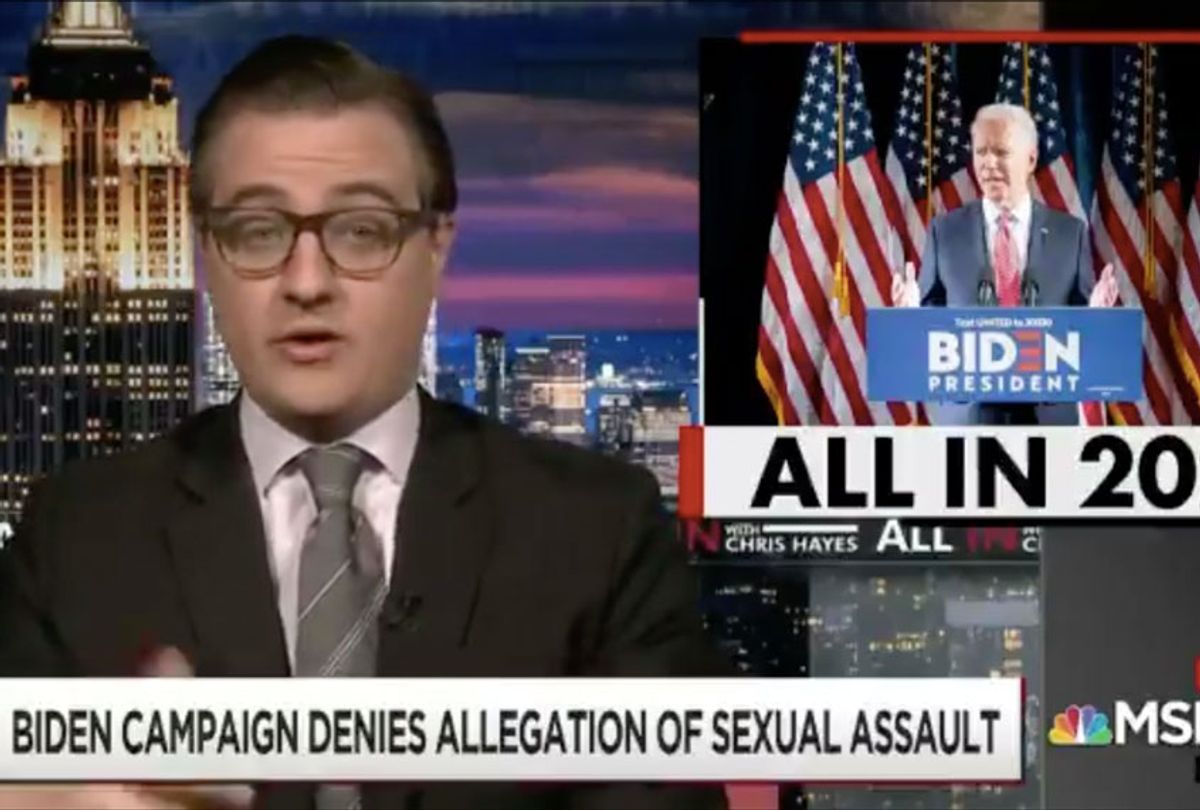 Former Biden Senate staffer Tara Reade alleged last month during a podcast interview that Biden pushed her against a wall and digitally penetrated her during an encounter in 1993, Salon's Amanda Marcotte reported before other outlets like The New York Times and Washington Post covered the accusations.

While the Biden campaign has denied the allegations, the former vice president has not personally addressed them. The claims gained traction this week when two women — a former neighbor and a former colleague — came forward to corroborate elements of the story in Business Insider.

Hayes on Wednesday interviewed New York magazine's Rebecca Traister, who criticized Biden in a recent essay for not addressing the allegation.

"What this is creating is a kind of a perfect storm where the women who are being asked to support his opponent are now being asked to answer for these charges, in part because of the vacuum created by Joe Biden, who is not yet really directly answering these questions," Traister told Hayes. "And certainly not doing what I wish he would, which is to say: 'Please direct your questions about these allegations to me — and not the women that are out there offering their support to my candidacy.'"

Traister referred to former Georgia gubernatorial candidate Stacey Abrams and New York Sen. Kirsten Gillibrand, who came out in defense of the former vice president this week. Both are believed to be in consideration to be Biden's running mate.

"The man in question — the nominee, the former vice president — is going to have to address them," Hayes said. "And not have Stacey Abrams or anyone else — or Kirsten Gillibrand — do that."

Abrams cited The New York Times' coverage of the allegations in an interview with CNN earlier this week.

"The New York Times did a deep investigation, and they found that the accusation was not credible," she claimed. "I believe Joe Biden."

"Our investigation made no conclusion either way," a spokesperson for the outlet said in a statement.

Though the allegations against Biden have now been widely reported, many of the Democrat's supporters called for MSNBC to "#FireChrisHayes." Some even alleged that Hayes was a Russian plant.

But Hayes also drew praise from those on the left who have been critical of mainstream media for, until recently, ignoring the allegation.

"I am consistently impressed with @chrislhayes' willingness to do what is right and buck the undoubtably weighty influence of network television," Emma Vigeland, a reporter for The Young Turks, said. "It's not close — he is *the* best host working within a system that doesn't necessarily incentivize his instinctive truth telling."

"Chris Hayes has been one of the media's most virulent, relentless & arguably effective Trump critics -- an all-consuming loathing for the President -- but #FireChrisHayes was trending because he covered the sex assault allegations against Biden. Shows what MSNBC has cultivated," Glenn Greenwald, a former Salon columnist and the co-founder of The Intercept, tweeted. "Also, with this completely deranged backlash against [Hayes] for the crime of covering what a news story - one that just happens to be unfavorable to Dems - you see the extreme career incentives for cable hosts never to tell their audiences anything they don't want to hear."

"Tara Reade deserves to be heard, and voters deserve to hear her. They deserve to hear from Joe Biden, too," the editorial board wrote. "There are, at the moment, no clear conclusions. There may never be. But that is no excuse for not searching."

"President Trump has been credibly accused of sexual assault, including rape, by dozens of women," it added. "It may seem unfair to hold Mr. Trump's likely rival in the 2020 race to a standard that Mr. Trump has failed to meet again and again. But Mr. Trump shouldn't be allowed to set that standard. A better man could."

While some Biden supporters, like Sen. Amy Klobuchar, D-Minn., said that the allegation should be investigated, Speaker of the House Nancy Pelosi, D-Calif., offered Biden her unconditional support in a Thursday interview with CNN.

"I have great sympathy for any women who bring forth an allegation, and I'm a big strong supporter of the #MeToo movement," Pelosi said. "I think it's made a great contribution to our country, and I do support Joe Biden. I'm satisfied with how he has responded. I know him. I was proud to endorse him on Monday — very proud to endorse him — and so I'm satisfied with that."

Pressed by CNN host Alisyn Camerota on why Biden had not addressed the allegation himself, Pelosi said it was a matter that the former vice president "has to deal with."

"But I am impressed with the people who worked for him at the time saying that [they] absolutely never heard one iota of information about this. Nobody ever brought forth a claim or had anybody else tell them about such a claim," she added. "But again, we have an important election at hand."