Fear and loathing in the Rose Garden 2020: A journey into the heart of the American nightmare

Is my veep eating pages out of the Bible? Is that little suck-up Jared stealing my lines? Time for more Adderall 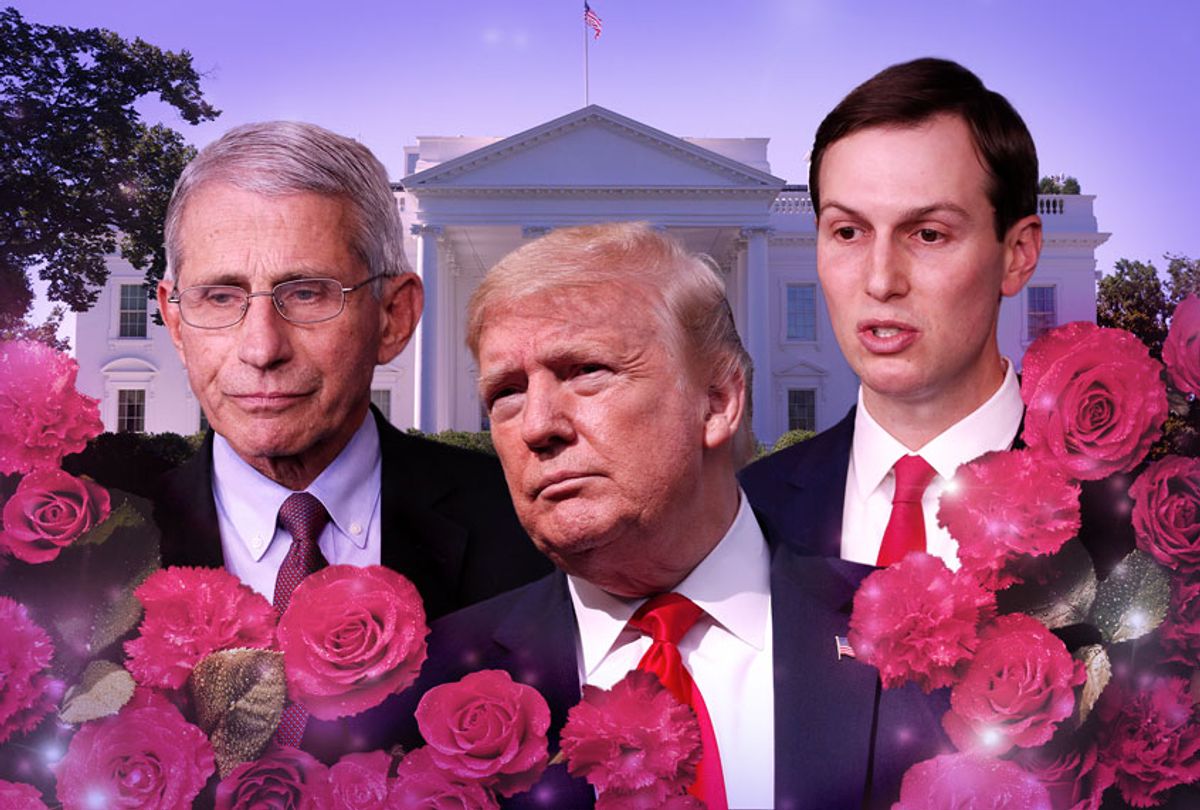 We were somewhere outside the Oval Office on the edge of the reality-based community when the drugs began to take hold. I remember saying something like, "I feel a bit lightheaded, maybe you should lead the briefing today..." And suddenly there was a terrible roar and the sky was full of what looked like huge bats, all swooping and screeching and diving all around us, and a voice was screaming, "Holy Jesus! What are these goddamned animals?" and then I realized it was my voice, and the bats were coming out of my own mouth.

Then it was quiet again. My vice president had taken off his suit jacket and shirt and was ripping pages from his Bible and slapping them onto his bare chest to facilitate protection from the women in the Fake News media he knew would be ogling him. "What the hell are you yelling about?" he muttered, his eyes shifting nervously, looking for his wife, who he knew would be looming somewhere in the background protecting him. "Never mind," I said, approaching the podium. No point in mentioning those bats, I thought. The poor bastard will see them soon enough if his wife doesn't grab him by the ears and frog-march him away from women.

It was almost 6:00 p.m., and we still had another two hours to go. They would be tough hours, I knew from experience. Very soon we would be completely twisted up in yet another web of my lies and half-truths and outright lunacy, but there was no going back, and no time to rest. We would have to ride it out, just as we had done every day since the death toll forced these bloody briefings on us. The White House press was arrayed on the grassy lawn of the Rose Garden like a squad of Taliban terrorists, ready to attack, and the Task Force was lined up before them like a collection of performing penguins: Acting cabinet secretaries nobody has ever heard of, and Doctor Shoulder Scarf, so exhausted she looks like somebody took a two-by-four to her, and some pals of Lou Dobbs', and a guy with a muskrat on his head who was on TV around the clock advertising pillows, and a couple of oil company oligarchs I personally threw in to boost their stock prices, and there appeared to be a frightened little dude with shaking hands down at the end of the row who I'd never seen before, and nobody seemed to know who he was, or what he did, but he looked a lot like Stephen Miller, so I let him stay.

We had just filed out of the Oval Office, from a meeting where we discussed what an incredible job I have been doing. It wasn't easy coming up with new superlatives. The top of the Resolute Desk looked like a cross between a fast food drive-through and a police narcotics lab. There were two gigantic jugs of Adderall, six Big Macs, two tubs of KFC Extra Crispy, a case of hydroxychloroquine, three Quarter Pounders, six prescription bottles of Valtrex, four extra large cups of fries, a salt shaker half full of cocaine, and a whole galaxy of multicolored uppers, downers, exaggerators, laughers, screamers . . . Not that we needed all of that to confront the media, but once you get locked into a serious binge of prevaricating and lying and general ugliness, the tendency is to take it as far as you can.

"I know what you can tell them," Jared shouted from the other end of the row as we took our positions. "We've achieved all the different milestones that are needed! The federal government rose to the challenge, and this is a great success story!"

That worthless little suckass! He stole my line!

The only thing that really worried me was my iPhone. There is nothing in the world more hopeless and irresponsible and depraved than a president in the depths of a Twitter binge, and I didn't know how long I could go without seizing it in my fist and scrolling through the day's QAnon retweets. I knew I'd be into that rotten stuff pretty soon…

Yes! It was time to excuse myself to duck back into the Oval and let the guy from Walgreens grovel: "I have no idea what I'm doing here, Mr. President, because we have done absolutely nothing to establish any testing drive-throughs in our parking lots, and we're completely out of toilet paper and hand sanitizer, but I was glad to respond to your call, Mr. President, because I want the fucking golf courses opened up so I can get back on the links, and the vice president has told me you're the man who can do it."

I had sampled almost everything but the Adderall, and now it was time for a fistful of those babies and a long snort of tweets. Do the next hour and a half of the briefing sounding like I'm jackhammering concrete, and the press won't say a thing. I stand up there every day with my eyeballs ping-ponging and my hands flying uncontrollably from side to side saying everything is "very strong," and "very powerful," and everything will happen in a "very short period of time," and "Our death totals, our numbers — per million people — are really very, very strong, and we're very proud of the job we've done," and I'm telling you, that's all it takes. Just keep the lips moving and the hands waving and the tie flapping and the lies coming. I've been babbling this shit for weeks, and I'm attacking them for being lazy and stupid and wrong and un-American, and I'm lumbering around the podium in a kind of spastic stupor, and the fake news just keeps treating me like I'm normal and coming back for more.

The only way to keep alert dealing with these fuckers is to do up a lot of Adderall — not all at once, but steadily, just a fistful at a time, enough to maintain the focus as the fake news recovers from the last riff of lies, giving me time to rummage through the old brainpan for a new spate of gibberish. How long can I maintain this? I remember thinking, around about the time the death total passed 30,000, how many have to die before they see the bats flying out of my mouth, swooping around the Rose Garden, blackening the sky? The only conclusion you can come to is that it's working. All you have to do is choke down another couple of Big Macs and gobble up more Adderall and keep the cruelty and incompetence and illiteracy coming. It's like a drug for them. The bats keep flying and they keep writing down everything I say. It's like a miracle. They can't get enough of it.

(With apologies to my old friend, Hunter S. Thompson.)