Everything Trump does is about trying to win the election. But his new plan is cruel and stupid — and won't work 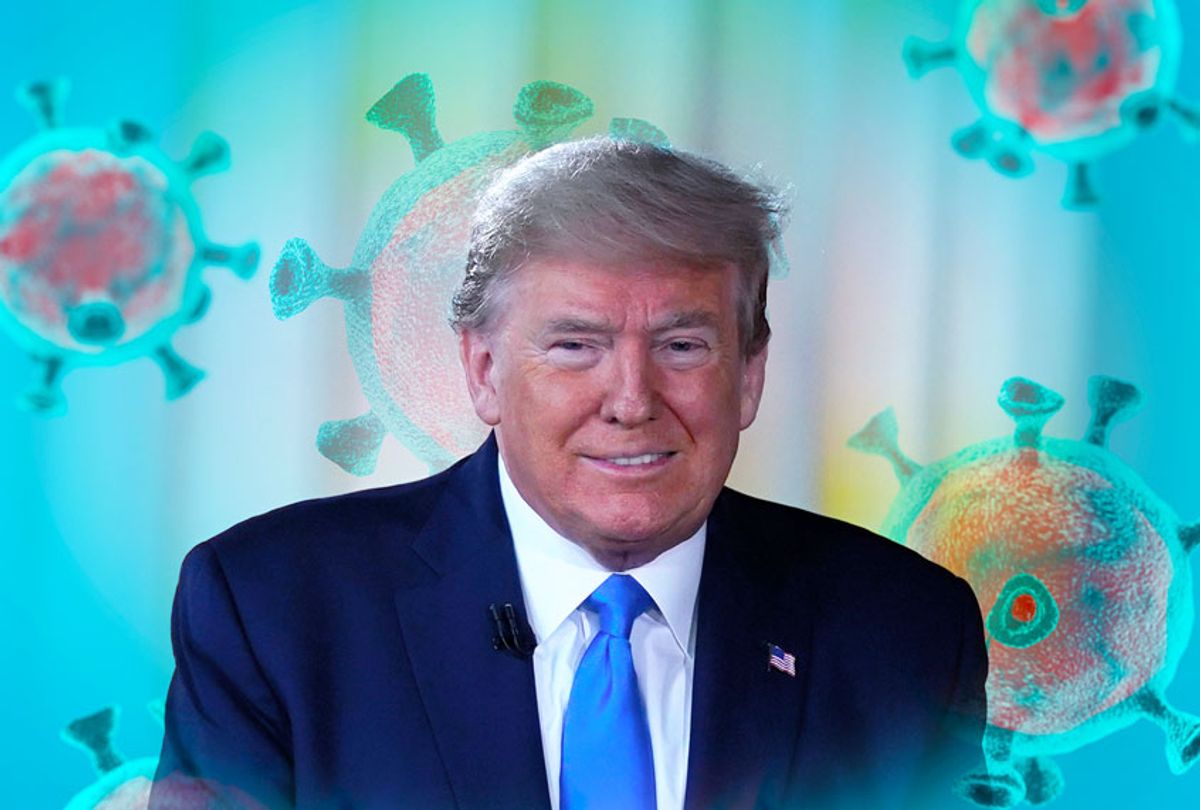 Every ridiculous action taken by Donald Trump makes a little more sense when viewed through the prism of re-election. Every terrible decision, every whiny outburst, every childish tweet is issued with the goal of helping Trump get re-elected, and of course re-election explains his horrifyingly incompetent response to the COVID-19 pandemic.

Rather than safely and sanely handling the crisis, Trump continues to desperately rush things along like a Mountain Dew-guzzling little boy in the back seat of his parents' car chanting, "Are we there yet?" Trump doesn't know much, but he at least understands that the deeper the economy collapses into a historically massive recession, the worse his chances for re-election get, even with Russia's help, even with disgruntled Bernie supporters refusing to vote for Joe Biden, even with voter ID and the possibility of limited mail-in ballots, and even with his $1 billion disinformation "Death Star" across the Potomac from Georgetown.

Trump knows that if he loses the election, he will likely be indicted or sued or both, and we're not just talking one indictment or one lawsuit, but a stack of them so stratospherically high that prosecutors and lawyers alike will require the Space Force to grab from the top of the pile.

Consequently, every action and every blurt is geared toward making sure Trump wins. He hopes to achieve this by: 1) gratuitously praising himself despite his maliciously ineffectual handling of the pandemic, and 2) hastening the "reopening" of the economy through relaxing stay-at-home restrictions and encouraging his followers to take to the streets in protest.

Why? He thinks it'll help him secure a second term.

As long as his brainwashed fanboys are fed a constant diet of Trump's ceaseless brags and knee-jerk indulging of his disciples' self-destructive nincompoopery, he figures he can secure at least 45 percent of the popular vote, while the rest of the votes he needs to win are Moneyballed in key swing districts using targeted disinformation on Facebook.

We've all witnessed it, often in real time — his "LIBERATE MICHIGAN!" shriekings and other all-caps rally yelps aimed at the sometimes heavily-armed mobs of "very good people" gathering at statehouses across the nation. These are clear and unequivocal presidential endorsements for violating stay-at-home orders, and anyone with functioning gray matter knows it.

Trump obviously wants these increasingly berserker protests to continue in hopes of forcing governors to, like Trump, ignore experts and reopen businesses and schools prematurely. Again, why? It's partly so he can blame the governors, especially the blue-state ones, for any subsequent spikes in the numbers. It's also because the protests amplify the grievances of his base, which is good for turnout. Most important, the protests might expedite the supposedly triumphant resurrection of the economy. Trump knows these are all key ingredients for a successful November election.

What the easily-led hordes of torch-wielding townspeople from "The Simpsons" don't understand is that their doughy messiah is driving them at ludicrous speed directly toward a brick wall.

First, we learned on Monday that one of the most cited forecasting models for the COVID-19 death toll, compiled and issued by the Institute for Health Metrics and Evaluation at the University of Washington, was recently revised upward from around 72,000 American deaths to 135,000. A professor working on the model cited several reasons for this, including the "premature relaxation of social distancing." Meanwhile, the Penn Wharton Budget Model projects an additional 233,000 deaths, or around 350,000 total deaths, if all the states were to entirely drop restrictions.

Likewise, and most shockingly, the Centers for Disease Control and Prevention has reportedly revised the projected daily death toll in the U.S. from 1,750  to 3,000. In other words, Trump's own CDC is forecasting this 70% increase in the death rate while Trump himself screams liberation slogans from his haggard bully pulpit.

Once again, knowing the CDC's new numbers, we're faced with questions: What did the president know and when did he know it? Is he continuing to push for a hasty end to stay-at-home orders knowing the daily death-toll projections have shot up? Does he realize the damage he's inflicting, even among his own supporters?

Predictably, any reporter who asks him such questions will be confronted with another crazy-eyed tantrum — more crying and whining by the president about how "viciously" he's being treated. By the way, one more question. Who's more vicious: a reporter asking a tough question or Trump encouraging his own people to break the rules and stage public protests, knowing the virus is getting worse and some may die for doing what their Mad King tells them to do?

The great irony — the one the protesters clearly can't grasp — is that Trump's increasingly jittery demands to reopen will only serve to extend the duration of the pandemic, worsening the death toll and requiring continued distancing, perhaps through the summer and beyond. After all, we're still near the peak of the pandemic on a national scale with no end in sight, yet these badly deluded idiocrats are acting as if the war is over, even while the proverbial bombers are still buzzing through the air above Pearl Harbor.

The other not-insignificant irony is that while Trump, driven by re-election fever, infusion-pumps a cockamamie reopening scenario into the tenderized skulls of his supporters, potentially killing some of them and extending the economic crisis, he still has a really good chance of losing the election anyway. It's a huge gamble for Trump:  What he's framing as tremendously strong action is, in reality, a bungled and botched response made worse by his foolish insistence on premature reopening. As though trapped in quicksand of his own making, the more he struggles to prop himself up with a facade of strength, the more brutally inept he looks to any non-cultist who's paying attention.

During this harrowing episode in our national history, we're faced with two unprecedented calamities: an economic crisis and a health care crisis. Each one is being aggravated by a garishly costumed villain in the White House who lacks any interest in a rational, sustainable resolution. Sadly, this villain also possesses a base of loyalists who simultaneously recognize him as a serial liar while also insisting he's the only government official who's telling the truth. No wonder they're so unspooled.

The Trump fanfic on display around the clock on Fox News and elsewhere continues to bash up against reality — and it's the suckers who believe in these obvious fantasies who will become the next round of victims as the virus juggernauts into the red states.

Neither they nor their cult leader appear to understand that a national crisis requires a national solution. We all need to make the sacrifice — self-isolating and social distancing no matter how nice the weather is, or how badly your Red Hat uncle wants to own the libs. The alternative is for Trump, even while he knows the true cost in lives predicted by the CDC, to continue energizing the protests, guaranteeing that this goes on far longer than it should, while the economy dissolves and the death toll continues to give us a new 9/11 every damn day.