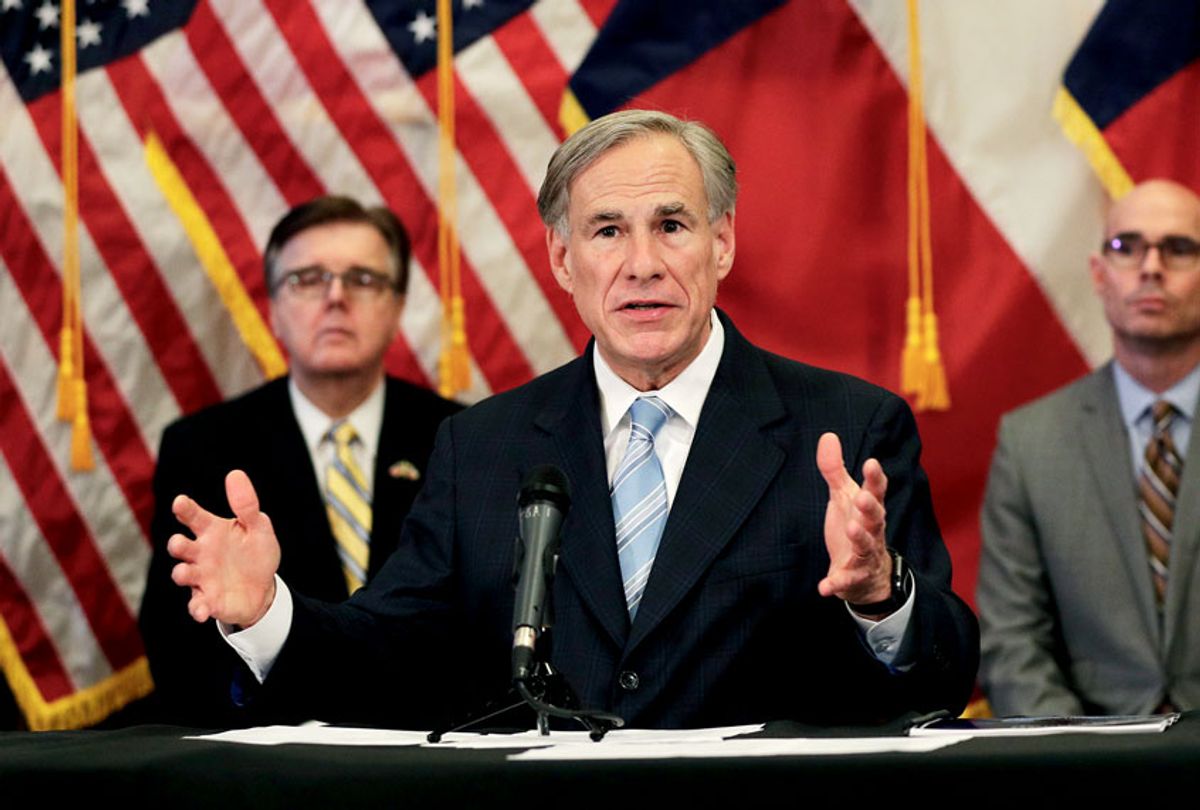 Texas Gov. Greg Abbott speaks during a news conference where he announced he would relax some restrictions imposed on businesses due to the COVID-19 pandemic, Monday, April 27, 2020, in Austin, Texas. (AP Photo/Eric Gay)
--

In an act of defiance against Gov. Greg Abbott's continued shutdown of barbershops and other businesses, two Republican lawmakers sat in a Houston-area salon Tuesday while getting illegal haircuts.

State Reps. Steve Toth, from The Woodlands, and Briscoe Cain, from Deer Park, added fuel to the movement against state and local restrictions intended to slow the spread of COVID-19.

On Friday, a sliver of Texas businesses were allowed to reopen after Abbott announced he would let Texas' stay-at-home order expire. The multiphase reopening plan allows some businesses — like retail stores, restaurants, movie theaters and malls — to open with limited capacity. But businesses including barbershops, hair salons, bars and gyms can't reopen yet because Abbott said a team of medical experts had advised that it is still unsafe.

On Tuesday, however, Abbott announced that he will reopen hair salons and barber shops beginning Friday — 10 days earlier than he had previously signaled.

As long as businesses can reopen safely and follow Centers for Disease Control and Prevention guidelines, "there's absolutely no reason" why they should be kept from getting back up and running, Toth said in an interview with The Texas Tribune while getting his haircut.

"A little less on the sides," Toth told the hairstylist in between a reporter's questions.

"Some of these people are being forced into bankruptcy. These are small businesses where the owners of these franchises have mortgaged their homes, they've gone into debt, and if they don't get some relief, they're going to go bankrupt," Toth said.

Toth said restrictions were in place initially to slow the spread of the virus, and "it was never about being able to stop the spread of COVID-19." At-risk populations, like older people and those who are medically fragile, should be protected and isolated while everyone else goes back to work, Toth said.

Hailey Lankford, a stylist at Tune Up: The Manly Salon in Montgomery County, where Toth and Cain got haircuts, said it's "essential" for her to go back to work.

"If I do not go back to work, my car will be [repossessed], I will be evicted, I have no choice," Lankford said. "I'm not getting the money from the government along with a lot of other hairdressers I know."

The salon reopened over the weekend but was quickly shut down by local law enforcement officers who threatened to arrest Lankford and her colleagues if they didn't close, Lankford said.

Tuesday was the salon's first day reopening since the visit from law enforcement, Lankford said. About three other customers were in the shop while the two lawmakers got their cuts, Toth said.

Cain said he wanted to set an example for other consumers.

"I think these businesses need to be open," Cain said in an interview with a Fox 26 reporter while getting a haircut. "But I also believe that customers shouldn't be afraid to go to these businesses, and so I wanted to take a stand and lead and be in front to encourage other customers to go out and go to businesses that are deemed essential or nonessential and help them stay open."

A spokesman for Abbott did not immediately respond to a request for comment.

The Houston-area salon isn't the only nonessential business going against official orders that shut down many businesses. The city of Dallas is suing the owner of Salon A la Mode for reopening despite local stay-at-home orders. On Tuesday, The Dallas Morning News reported the salon owner Shelley Luther was sentenced to a week in jail for violating a court order to close.

"From Donald Trump to Greg Abbott to Briscoe Cain and Steve Toth, Texas Republicans have mismanaged and downplayed the seriousness of the coronavirus crisis. It's time for sensible leadership that keeps the public safe," said Abhi Rahman, a spokesman for the Texas Democratic Party.