The acclaimed "Booksmart" actress spoke to Salon about putting on a British accent, her idols, and caring too much 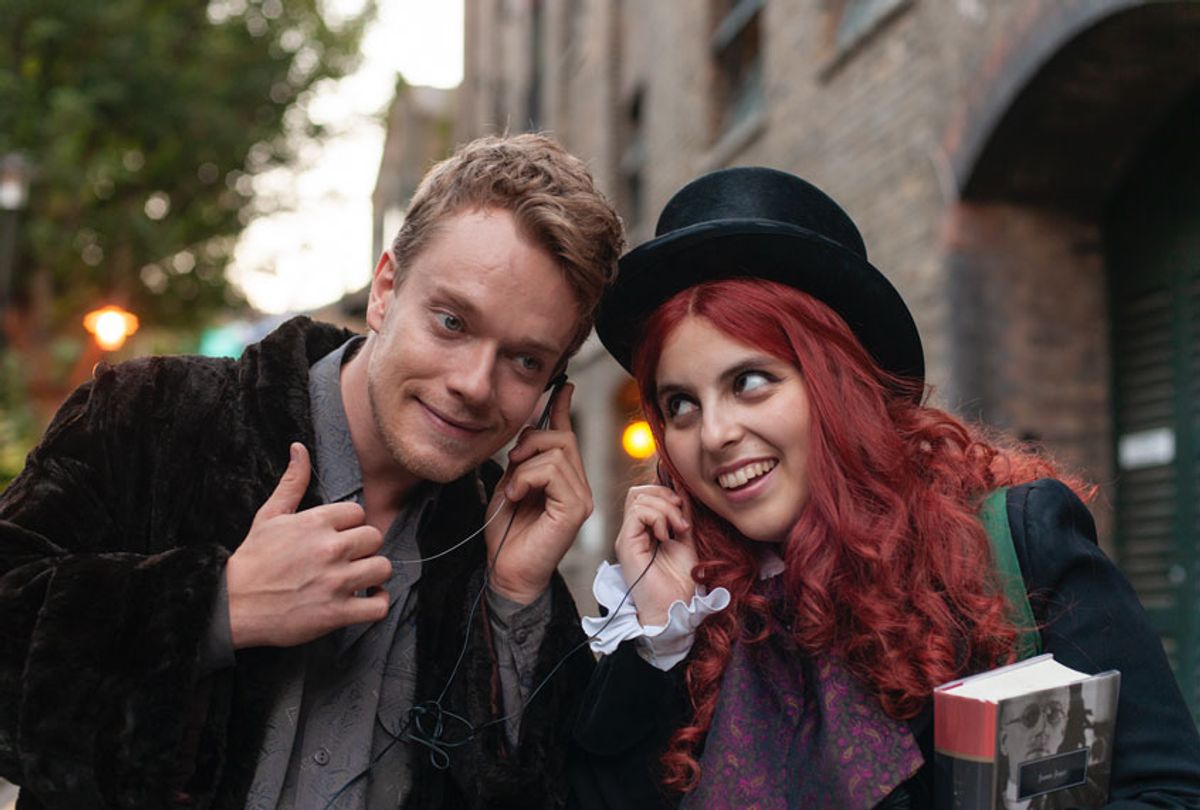 After her impressive turn in the Golden Globe-winning "Lady Bird," and her hilarious performance in "Booksmart," Beanie Feldstein gets a plum starring role in "How to Build a Girl," a coming-of-age comedy, based on Caitlin Moran's novel, that is being released in theaters and on demand May 8, along with other movies streaming in May.

Feldstein plays the hapless, working-class Johanna Morrigan, a 16-year-old living in a cramped house in the English Midlands, who dreams of adventure. Selected for a live poetry competition, Johanna has an epic fail when she appears on TV. However, she reinvents herself as Dolly Wilde, and applies for a job as a critic for a music magazine. She achieves some success until her profile of John Kite (Alfie Allen from "Game of Thrones") — whom she falls for — nearly gets her fired. Reinventing herself again, she savages bands and achieves greater fame — but at what price?

"How to Build a Girl" is tailor-made for Feldstein's talents, allowing her to shine as a misfit teen who is often humiliated, but uses her smarts to get the upper hand. She talks to her God wall — pictures of famous people including Elizabeth Taylor (Lily Allen), Sylvia Plath (Lucy Punch), who offers her suicide advice, and the sunny Julie Andrews (Gemma Arterton) in "The Sound of Music" — for inspiration. She eventually becomes part of the cool crowd, making her way as the only girl (and a teenager, no less) in a world ruled by men. Her negative reviews of bands and records get her nominated for the cheeky "Asshole of the Year" award, and she starts to lose her soul.

Feldstein, who sports a British accent and a steampunk wardrobe, is immensely likeable as Johanna/Dolly builds herself up and tears herself down and rediscovers the truth of who she is. She chatted with Salon about her new film, her penchant for humiliation, and her endless thirst for knowledge.

Beanie, I have to gush like Johanna would. This is the kind of film the 14-, 16-, and now 52-year-old me loves because it is about a teen who grows up to be a writer. What can you say about inspiring young girls (and me) with this film?

I think the movie is so wonderful and celebratory — to see a 16-year-old girl overshadow some of these guys she's working with in the music scene in London in the '90s. It's a completely male-dominated environment, and she's like a bulldozer and genuinely passionate. She has a big brain and loves the world so much. She shows that passion will get you anywhere in life. Committing to something will get you anywhere. To see her have a career and be celebrated and make mistakes and have sex and go through these huge life moments and not always succeed but want to do the right thing is such an important thing to present to the world. I was so honored to bring Caitlin's journey to life because I could have used this film when I was 14.

Johanna is almost nothing like you. She is a 16-year-old, working-class, straight British girl, and probably not Jewish. But you pull her off completely and convincingly. How did you connect with this character?

I think the biggest thing was the accent. Again, reading it, I felt a jolt of connection, and thinking I was born in 1993. I was not a teen in 1993. I didn't know where Wolverhampton was. And yet, I knew this girl. I could see myself in the library as Johanna is, wanting more. We've all wanted more. What's brilliant about Joanna is she's so optimistic and charming in her ability to commit head-on, but she wants more. And I connect with that feeling. I'm a bubbly, outgoing optimist but that doesn't mean I've not wanted or wished for more or been through challenging moments. She's grateful and excited for the world and wants to push herself farther. Although the circumstances of our Iives are different, our heartbeats are really similar.

Johanna suffers considerable humiliation in "How to Build a Girl." Can you talk about finding humor in her pathos, and going from embarrassed to empowered?

There are so many things that happened to Johanna Morrigan that scared the crap out of Beanie Feldstein. I was so intimidated by the script and what happens to her. But the second I was doing it, I realized Johanna is incredibly free — and that was intoxicating for me to play. She does get humiliated, but she picks herself back up. She eats jam under her bed [when she's hurting] and gets up and tries again. I love that energy and pathos. I hope I took a little bit of her with me because of the number of times I get humiliated on a daily basis. I didn't trip on set on purpose. I have no control over my limbs. My hand-eye coordination is terrible on a normal day. But I dropped everything I was handed on set on a given day. I humiliated myself day in and day out, but Johanna has that energy — I'll try again. I love the line John Kite says, "You don't have the privilege, you have to try again. You can't stop and give up." That's an important lesson.

Johanna has a wall of heroes she finds inspiration in. Who inspires you?

Who's on my God wall? Sondheim. Carol King. Liz Taylor. Eleanor Roosevelt — I have always had her on the wall in my bedroom. Sandra Oh, Melissa McCarthy, Kristen Wiig, and Maya Rudolph.

What about a celebrity crush? Johanna/Dolly falls for John Kite. Was there someone you had a fan crush on?

Barbra Streisand. When I was 3, I was obsessed with her. I still am. She is a goddess.

What can you say about criticism and the idea of gatekeepers of our culture? Everyone can be a critic these days. What are your thoughts about tastemakers?

I think it's so interesting because it's empowering for teenagers to have the ability to express their opinions now through social media, which didn't exist before, but at the same time it's hard for me to say. My natural instinct is to be more like Johanna at the beginning of her work [when she's kind, not cruel]. That is where I live. I'm not a naturally critical person of art. I have an opinion, but I'm not critical. I love watching everything. My music taste is any playlist you send me. I want to know more. It's interesting to get inside her head because Johanna got to learn it throughout the process of exploring. It's important to express opinions, but I lead with kindness to be constructive without being cruel.

Do you have a favorite line of Dolly being critical?

My favorite piece of criticism is when she says to the boys, "You don't care about what you write, and I care about everything." It's emotional, but it's cutting. It is exhausting to care so much. That's something I feel in my life. I care so deeply, and it isn't always easy. She's calling them not on their cruelty, but on their apathy.

Dolly is told to write one true thing. Was there a moment or piece of advice you were given that helped you find who you are?

I've been lucky to get incredible advice throughout my life, but my high school drama teacher, Michelle — and we called her by her first name — on the last day of school sat down with us, and we were getting all emotional, and she said, "Stuff your pockets! Take in anything anyone is willing to teach you because you never know when it will come in handy and you'll be grateful for that knowledge." I expected to do theater, but I was a sociology major in college. I never thought I'd be in a film, or could be, but why shouldn't I try? I opened myself up to the opportunity. I'm a student of the craft, and I ask 10,000 questions. I always want to stuff my pockets.

"How to Build a Girl" is available on demand beginning Friday, May 8.

Beanie Feldstein How To Build A Girl Interview Movies